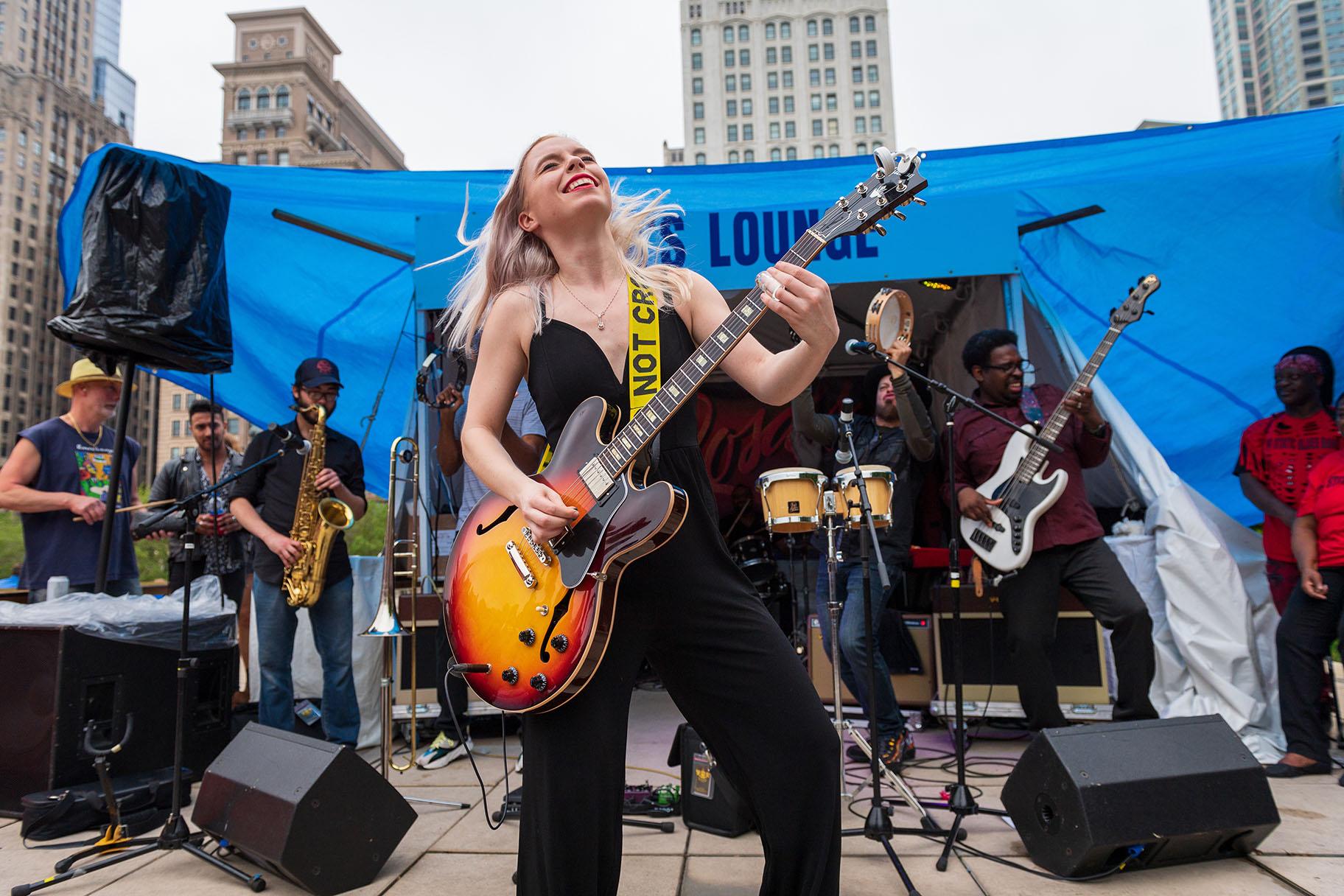 A new citywide music festival in 2021 will replace the Blues Fest, pictured, Jazz Fest and Gospel Fest with one night honoring each music tradition. (Courtesy Department of Cultural Affairs and Special Events)

Mayor Lori Lightfoot on Wednesday unveiled a plan to allow some festivals and events to take place in Chicago this summer, but not the Air and Water Show or the Taste of Chicago in its usual form, even as the COVID-19 pandemic eases.

The Taste of Chicago, which typically takes over Grant Park in mid-July, will feature to-go meals designed to showcase local restaurants at pop-up events throughout the city for the second year in a row, according to an announcement from the mayor’s office.

The city’s Open Culture plan is the “latest step in our mission to fully restore a sense of normalcy within our city by bringing back and reimagining some of our favorite summer- and fall-time activities,” Lightfoot said.

City officials announced no plans for the Air and Water Show to roar over the Lakefront in late August.

In addition, the announcement by the mayor’s office made no mention of plans for Lollapalooza.

Chicago is on track to “fully reopen” on July 4, Lightfoot said Tuesday.

“Permit approval is conditional on improved public health metrics,” according to the statement from the mayor’s office.

It costs the city $9 million annually to put on the Taste of Chicago and the Air and Water Show, and the Chicago City Council did not include any funds for festivals in the 2021 budget.

City officials also announced on Wednesday they would host a music series that would only admit fully vaccinated Chicagoans in an attempt to encourage residents to get inoculated against COVID-19. The first event will take place May 22 at the Silver Room in Hyde Park and feature DJs Ron Trent and Duane Powell.

Attendees must bring their CDC vaccination card and matching photo identification. Tickets will be available at noon Monday at silverroom.com.

The deadline to get vaccinated and attend the event is Saturday, officials said. The Johnson & Johnson one-dose vaccine will be offered between 9 a.m. and 2 p.m. Saturday at Apostolic Faith Church, 3823 S. Indiana Ave. and everyone jabbed will get a ticket to the event.

The Grant Park Music Festival will take place this year after being suspended in 2020, kicking off on July 2 and July 3 with the Grant Park Orchestra performing a salute to Independence Day and ending Aug. 20 and Aug. 21 with a performance of Mozart’s Violin Concerto No. 3 at the Pritzker Pavilion, officials announced.

A new citywide music festival, Chicago in Tune, will take place from Aug. 19 to Sept. 19. That festival will replace the Blues Fest, Jazz Fest and Gospel Fest with one night honoring each music tradition born and perfected in Chicago. The events were virtual last year.

The American Ballet Theatre is also scheduled to perform in Grant Park at 7:30 p.m. July 8, and the Millennium Park Music Series will take place from Aug. 2 through Sept. 13.

Outdoor farmers markets will also reopen, including the market on Daley Plaza on May 27 and the Maxwell Street Market on June 6, officials announced.

Pride in the Park will take place in Grant Park on June 26-27. That celebration of Chicago’s LGBTQ community will replace the typical parade in Lakeview and Boystown, officials said.

Chicago’s Goodman Theatre will reopen in August with performances of “School Girls; Or, The African Mean Girls Play” while “Othello” will be performed at the Court Theatre starting July 8 and ending Aug. 8. Plans call for Broadway in Chicago to reopen with performances of “Six” at Water Tower Place in October.

The city will also offer 100 grants between $5,000 and $30,000 to fund free, live, in-person concerts and events that “activate Chicago’s streets, plazas and parks,” officials said. More information is available online at chicago.gov/music.