On Chicago’s South Side, there’s a bridge spanning the Dan Ryan expressway that looks more like a Disney World monorail than part of a working CTA train line.

Geoffrey Baer has more on the bridge’s history, and what it can tell us about the development of Chicago’s neighborhoods in this week’s Ask Geoffrey.

What was the status of the Englewood branch of the now‐called Green Line during the construction of the Dan Ryan? Was the structure that currently spans the Ryan removed and reconstructed?

At about 59th Street, just north of where the Skyway splits off from the Dan Ryan, motorists pass beneath a bridge that carries the Green Line seemingly way, way up in the air. If you’re riding a Green Line train and look down at the Dan Ryan, you almost feel like you’re in an airplane. So what’s the story? 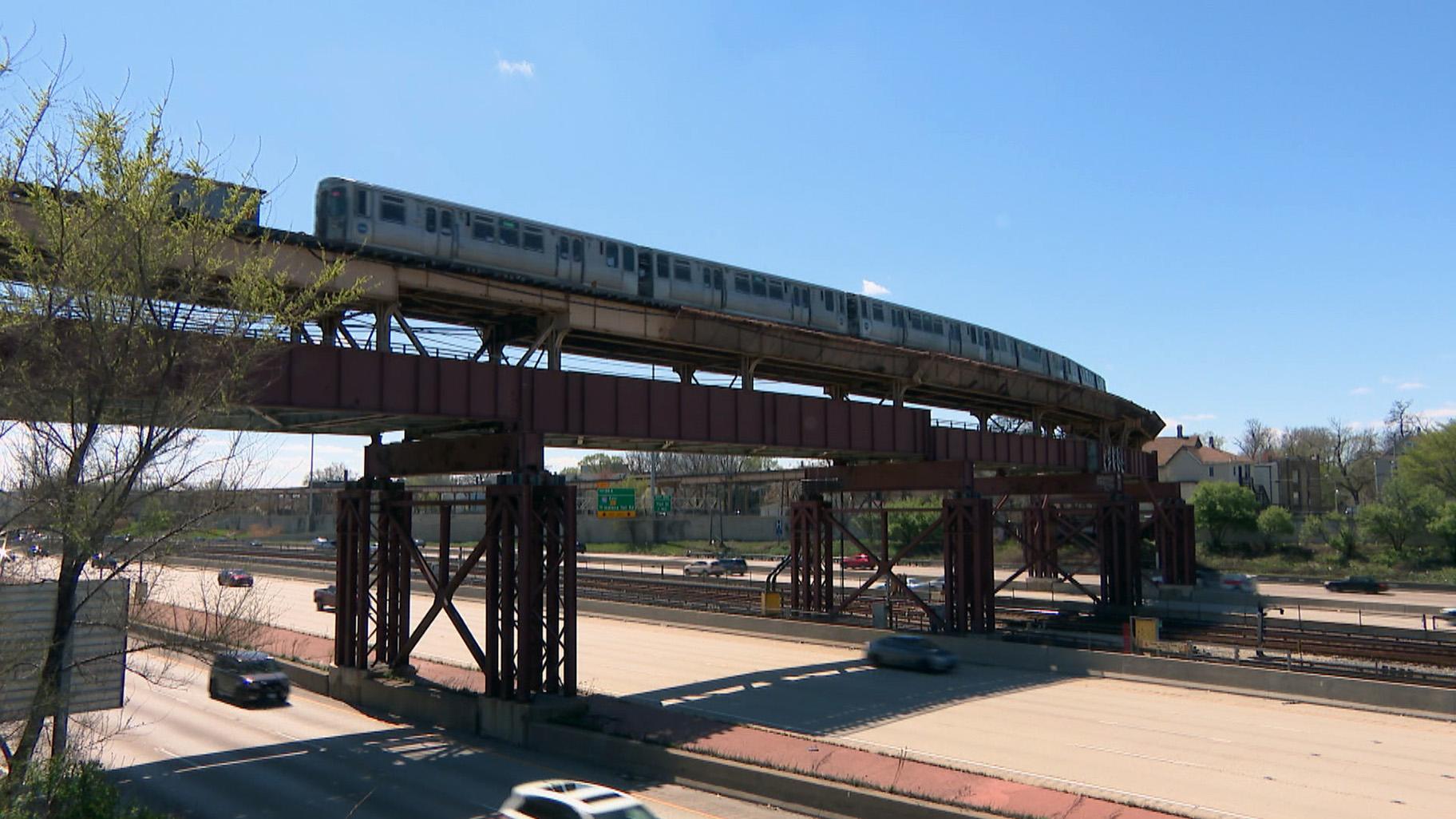 At about 59th Street, just north of where the Skyway splits off from the Dan Ryan, motorists pass beneath a bridge that carries the Green Line seemingly way, way up in the air. (WTTW News)

Well, when construction started on the Dan Ryan in the mid‐1950s, the question became how to keep the train running while at the same time digging a deep trench underneath the L structure for the future highway, which would be sunken below grade.

To accomplish this, the CTA constructed a second bridge to carry the original 1907 tracks. The weight from the original tracks was shifted to the new bridge so crews could excavate below them. In the words of CTA historian Graham Garfield, it was “a bridge on top of a bridge.”

That way, the train didn’t have to be halted and neither did the construction.

The Englewood branch – known today as the Green Line’s Ashland branch -- was constructed in 1905 as an extension of the South Side Elevated line, which had opened in 1892, a year before the Columbian Exposition. That was long before the city’s elevated trains were consolidated into the CTA we know and ride now.

Fast forward half a century to December 1962, and after six years and $209 million, the Dan Ryan opened as part of a massive frenzy of interstate highway construction in Chicago and other urban centers. The city used eminent domain to bulldoze a wide strip of homes and apartment buildings in the path of the Dan Ryan, many of which were owned or rented by Black residents.

The city managed to keep the trains running even during the construction of the Ryan, but because it was its oldest line, it was long overdue to be refurbished. In the 1990s, the line was almost totally rebuilt in preparation for the merger that would create the modern‐day Green Line. To do so, the CTA shut down the entire line for two years, from the South Side to Oak Park.

The CTA poured $300 million into refurbishing tracks and stations, replacing spans of steel, updating signals and more. With that, though, came the controversial and permanent closure of multiple stops and a change to service times, plus the economic impact on businesses during the years the line wasn’t operating.

While most of the Green Line eventually ended up reopening and businesses did recover, community organizations like Go Green on Racine have put the spotlight on stations that have remained vacant since the renovations in the 90s, like the one at Racine and 63rd Street in the middle of Englewood.

The project is working to revitalize the entire intersection right in the heart of the neighborhood. They are converting an old corner store into a fresh produce market, and turning a shuttered Chicago Public School into a housing and resource center for people returning from incarceration.