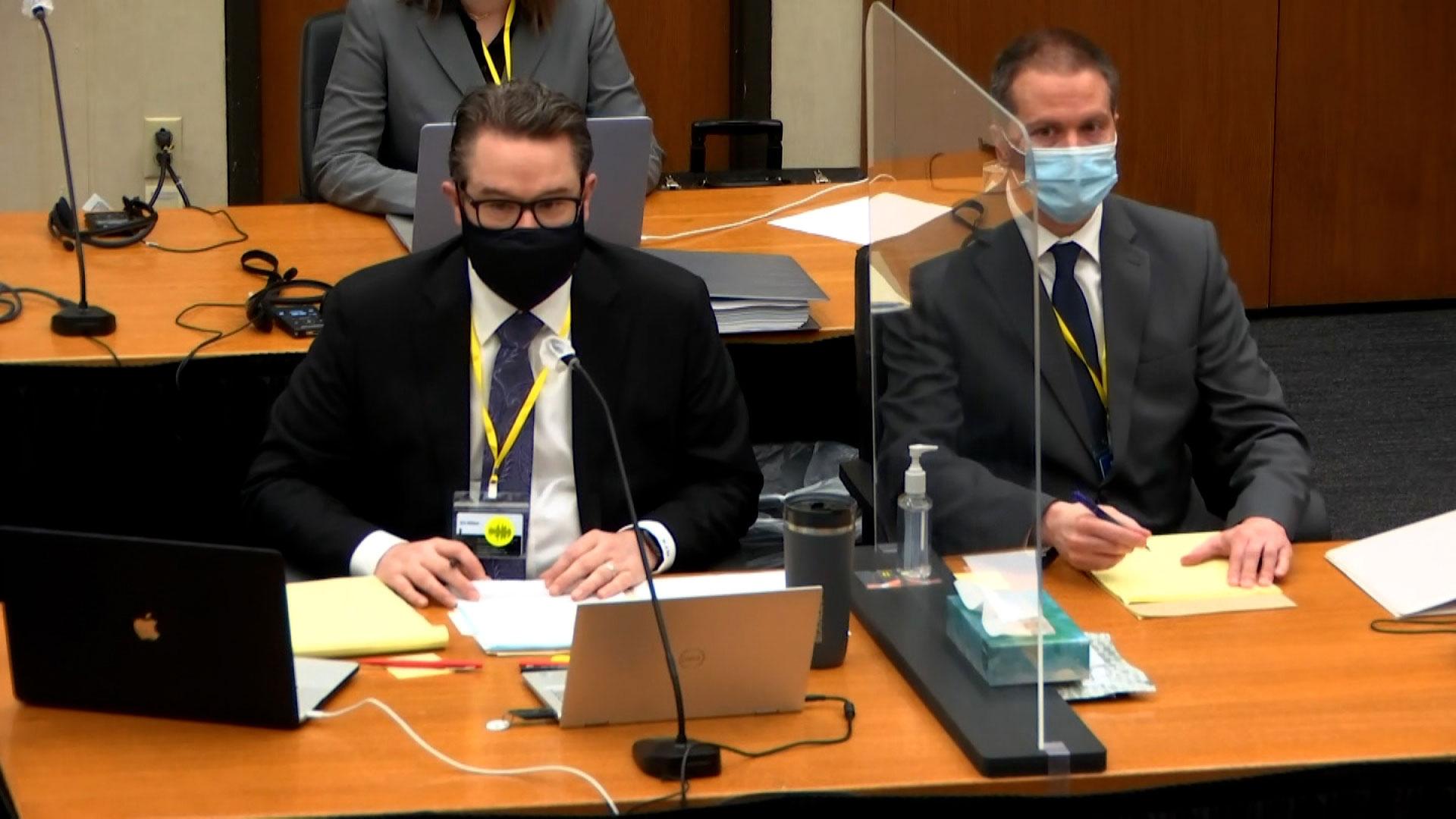 (CNN) -- George Floyd's heart disease and use of fentanyl were contributing factors to his death, but they were not the direct cause, the medical examiner who performed his autopsy testified on Friday in the trial of former police officer Derek Chauvin.

Hennepin County Chief Medical Examiner Dr. Andrew Baker ruled Floyd's death last May a homicide and identified the cause as "cardiopulmonary arrest" that occurred during "law enforcement subdual, restraint, and neck compression" -- all findings he stood by in court on Friday.

Asked about the autopsy and Floyd's death certificate, Baker described the "top line of the cause of death" as "what you think is the most important thing that precipitated the death."

"Other things that you think played a role in the death but were not direct causes get relegated to what's known as the 'other significant conditions' part of the death certificate," he said. "For example, you know, Mr. Floyd's use of fentanyl did not cause the subdual or neck restraint. His heart disease did not cause the subdual or the neck restraint."

Floyd had hypertensive heart disease, Baker said, "meaning his heart weighed more than it should." This meant Floyd's heart needed more oxygen than a normal heart and was "limited in its ability" to provide more oxygen when there was a demand for it.

In the midst of an altercation and being held to the ground, adrenaline would pour into the body, Baker said, making the heart beat faster.

"In my opinion, the law enforcement subdual, restraint and the neck compression was just more than Mr. Floyd could take by virtue of those heart conditions," he said.

Chauvin's defense attorney, Eric Nelson, has argued that Floyd died as a result of drugs and preexisting health conditions. And under cross examination, Baker said he believed those factors played a role.

"So in your opinion," Nelson asked, "both the heart disease as well as the history of hypertension and the drugs that were in his system played a role in Mr. Floyd's death?"

But Baker reiterated he stood by the cause of death he wrote on Floyd's death certificate and his finding Floyd's death was a homicide, which to a medical examiner means his death was caused by another person and does not necessarily indicate guilt.

"Yes, I would still classify it as homicide today," he said.

Baker's testimony came on the 10th day of Chauvin's trial, as the prosecution nears the end of its case. Friday was the culmination of a week filled with expert testimony by not only medical experts, but also policing experts who testified Chauvin violated policy and used excessive force on Floyd.

The Hennepin County Medical Examiner's official autopsy made no mention of asphyxiation as a cause of death, which has been a key pillar of prosecutors' case. In contrast, an independent autopsy commissioned by Floyd's family said he died of "asphyxiation from sustained pressure" when his neck and back were compressed by officers, cutting off the blood flow to his brain.

Baker did not watch any videos of Floyd's death prior to performing the autopsy, though he said he was aware of at least one viral video.

"But I intentionally chose not to look at that until I had examined Mr. Floyd," he said. "I did not want to bias my exam by going in with preconceived notions that might lead me down one pathway or another."

Baker said he "conveyed" to county prosecutors soon after the autopsy the "lack of anatomical findings" that would support the conclusion Floyd died of asphyxiation. After seeing the video, Baker said, in his opinion, the placement of Chauvin's knee would not cut off Floyd's airway.

Baker was preceded by forensic pathologist Dr. Lindsey Thomas, who has worked as a medical examiner herself, including in the Hennepin County Medical Examiner's Office, and who was part of Baker's training.

Thomas explained the technical wording of the medical examiner's finding in the cause of death, saying, "What it means to me is that the activities of the law enforcement officers resulted in Mr. Floyd's death. And that specifically those activities were the subdual, the restraint and the neck compression."

The medical analysis is important to the prosecution's case that Chauvin was a substantial cause of Floyd's death when he put his body weight on Floyd's neck and back for over nine minutes -- causing death by "positional asphyxia."

Thomas -- who has reviewed various records, including the medical examiner's autopsy -- agreed with Baker's finding in the cause of death, adding she believed the "primary mechanism of death is asphyxia or low oxygen."

Because of the restraint and his position, she said, Floyd was "unable to get enough oxygen in" to support his body's functions.

"There's no evidence," she said, "to suggest he would have died that night except for the interactions with law enforcement."

Thomas' testimony aligned with a pulmonary critical care doctor who testified on Thursday that Floyd died from a "low level of oxygen" when Chauvin pinned him to the street with his knee, restricting Floyd's ability to breathe.

Floyd's preexisting health conditions and drug use were not relevant to his death, Dr. Martin Tobin said.

Thomas said she would not have used the word "asphyxia" in Floyd's death certificate, saying it does not offer much additional information and requires more explanation. While a death by hanging is a type of asphyxial death, she explained, she wouldn't say "asphyxia due to hanging" -- she'd just say "hanging."

Additionally, Thomas said her review of the case, including the toxicology reports, allowed her to rule out other causes of death, including a drug overdose.

Floyd's death was not "sudden" like it would be with a methamphetamine overdose, she said. And it was not slow like one would see with fentanyl, where "the death is slow, it's peaceful, they fall asleep."

During her testimony, Thomas underscored the importance of the video evidence in reaching her conclusions, saying she would usually simply review a medical examiner's case file that would tell her about the cause and manner of death.

"But in this case, the autopsy itself didn't tell me the cause and manner of death," Thomas said. "And it really required getting all of this other additional information, specifically the video evidence of the terminal events, to conclude the cause of death and the manner of death."

Thomas and the jury reviewed photos of Floyd's injuries, including those she described as "superficial injuries" to his face, shoulders and wrists that support what she saw in the videos of his death: that Floyd was trying to push his body into a position where he could breathe.

Among the photos were pictures of Floyd's face, with scrapes over his left eyebrow and on his left cheek, according to a report from one of the reporters inside the courtroom. Other photos showed a large abrasion on Floyd's left shoulder that was evidence, Thomas said, of Floyd trying to push himself up.

Jurors appeared "relatively well-engaged" during Thomas's testimony, according to reports from two courtroom pool reporters. When she said she believed asphyxia or low oxygen was the "primary mechanism" of Floyd's death, "nearly all jurors were seen writing this down."

One pool reporter observed all jurors looking through the photos. Some were seen "flipping ahead looking at all the images."

Juror questioned about outside influences

One of the jurors was questioned Friday morning by Judge Peter Cahill about "some concerns expressed" over outside influences, per the reports from two reporters inside the courtroom.

Before testimony began, the woman juror told the judge she had "turned on a television and briefly saw coverage" and "saw an image of the courtroom with a woman with dark hair." Her volume was off, the woman said, and she quickly turned off the TV, the reports said.

The judge also asked the woman if she'd had contact with any family members about the case. The woman said a relative texted her but she said she did not respond, the reports said.

"Any book deal in the works?" Judge Cahill asked.

"The woman became slightly flustered or surprised," one report said.

"No, I don't know how this case is going to go," she said, reiterating she hasn't talked to anyone about the trial.

Judge Cahill asked if attorneys wanted to make any motions after the woman left the courtroom. Defense attorney Eric Nelson declined. Prosecutor Steve Schleicher said he would like the record to note the woman's demeanor. Judge Cahill noted the woman seemed "surprised."

Jurors are released each day with instruction to avoid media coverage and to report to the court any efforts to contact them. This is to keep jurors free from outside influence that could impact deliberations and the outcome of the case.

Two men initially selected to be on the jury were excused after they told the court that news of Minneapolis's $27 million settlement with Floyd's estate affected their ability to be impartial.