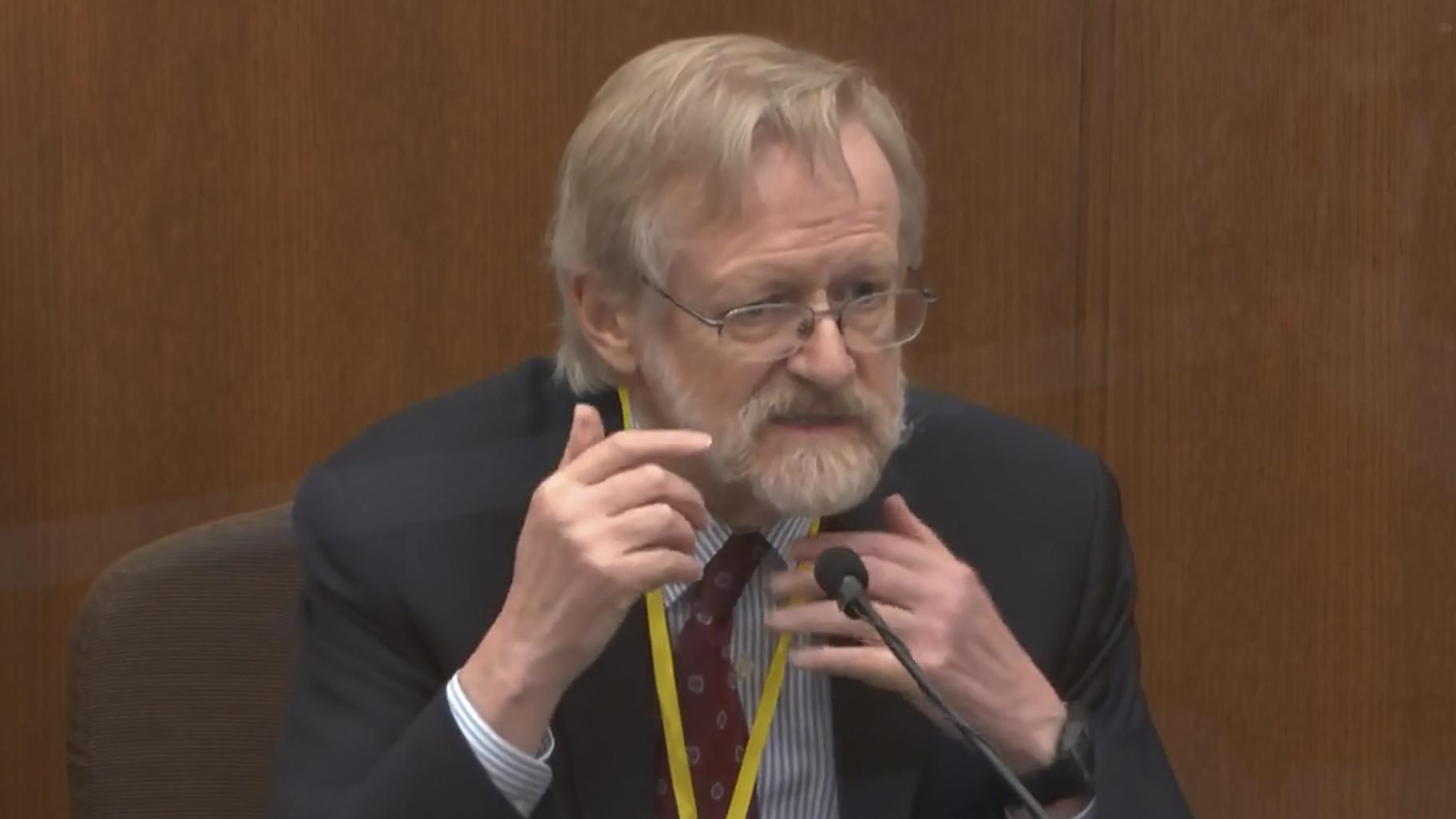 MINNEAPOLIS (AP) — George Floyd died of a lack of oxygen from being pinned to the pavement with a knee on his neck, medical experts testified at former Officer Derek Chauvin’s murder trial Thursday, emphatically rejecting the defense theory that Floyd’s drug use and underlying health problems killed him.

“A healthy person subjected to what Mr. Floyd was subjected to would have died,” said prosecution witness Dr. Martin Tobin, a lung and critical care specialist at the Edward Hines Jr. VA Hospital and Loyola University’s medical school in Illinois.

Using easy-to-understand language to explain medical concepts and even loosening his necktie to illustrate a point, Tobin told the jury that Floyd’s breathing was severely constricted while Chauvin and two other Minneapolis officers held the 46-year-old Black man down on his stomach last May with his hands cuffed behind him and his face jammed against the ground.

The lack of oxygen resulted in brain damage and caused his heart to stop, the witness said.

Tobin, analyzing images of the three officers restraining Floyd for what prosecutors say was almost 9 1/2 minutes, testified that Chauvin’s knee was “virtually on the neck” more than 90% of the time.

He said several other factors also made it difficult for Floyd to breathe: officers lifting up on the suspect’s handcuffs, the hard pavement, his prone position, his turned head and a knee on his back.

Chauvin kept his knee on Floyd’s neck for 3 minutes, 2 seconds, after Floyd took his last breath, Tobin said. After that last breath, Floyd’s oxygen levels went down to zero and Floyd “reached the point where there was not one ounce of oxygen left in the body,” he said.

As prosecutors repeatedly played a video clip of Floyd on the ground, Tobin pinpointed what he said was a change in the man’s face that told him Floyd was dead. That moment happened around five minutes after police began holding Floyd down.

“At the beginning, you can see he’s conscious, you can see slight flickering, and then it disappears,” Tobin said. He explained: “That’s the moment the life goes out of his body.”

Chauvin, 45, is charged with murder and manslaughter in Floyd’s death May 25. Floyd was arrested outside a neighborhood market after being accused of trying to pass a counterfeit $20 bill. Bystander video of Floyd crying that he couldn’t breathe as onlookers yelled at the white officer to get off him sparked protests and scattered violence around the U.S.

Tobin also testified that just because Floyd was talking and can be seen moving on video doesn’t mean he was breathing adequately. He said a leg movement seen in the footage was an involuntary sign of a fatal brain injury, and that a person can continue to speak until the airway narrows to 15%, after which “you are in deep trouble.”

Officers can be heard on video telling Floyd that if he can talk, he can breathe.

During cross-examination, Chauvin attorney Eric Nelson pressed Tobin on that common misconception, pointing to earlier testimony that Minneapolis officers are trained that if people can speak, they can breathe.

Nelson has argued that Chauvin did what he was trained to do and that Floyd’s death was caused by illegal drugs  and underlying medical problems, including high blood pressure and heart disease. An autopsy found fentanyl and methamphetamine in his system.

Tobin said he analyzed Floyd’s respiration as seen on body-camera video and explained that while fentanyl typically cuts the rate of respiration 40%, Floyd’s breathing was “right around normal” just before he lost consciousness.

Tobin also said the high blood level of carbon dioxide measured in the emergency room can be explained by Floyd not breathing for nearly 10 minutes before paramedics began artificial respiration, as opposed to his breathing being suppressed by fentanyl.

Another prosecution witness, Dr. Bill Smock, an expert on deaths from asphyxia, backed up Tobin’s assessment. Smock said Floyd did not have symptoms of a fentanyl overdose such as constricted pupils and decreased breathing. He said Floyd’s actions were the opposite, because he was pleading for air.

“That is not a fentanyl overdose. That is somebody begging to breathe,” said Smock, the police surgeon for the Louisville, Kentucky, department and a former emergency room doctor. He said Floyd died of “positional asphyxia,” a lack of oxygen because of the position of the body.

On cross-examination, Nelson questioned Smock about Floyd’s history of heart disease, getting Smock to agree that a struggle with police could put stress on the heart and that shortness of breath could be a sign of a heart attack.

But when questioned again by the prosecution, Smock said there was no evidence that Floyd had a heart attack or sudden death from arrhythmia, saying his death was caused by a gradual decrease of oxygen over several minutes “because of the pressure being applied to his back and neck.”

Also Thursday, a forensic toxicologist said that he tested blood drawn from Floyd at the hospital, as well as urine from his autopsy, and found a “very low” amount of methamphetamine. Daniel Isenschmid said fentanyl and a byproduct of its breakdown also were in Floyd’s system.

Isenschmid put the level of fentanyl in Floyd’s blood at 11 nanograms per milliliter. For perspective, he said that testing of more than 2,000 people arrested for driving under the influence of fentanyl revealed an average concentration of 9.59, and dozens of them had levels higher than Floyd’s — and survived.

On cross-examination, Nelson suggested there was no way to know how much fentanyl Floyd had ingested, and Isenschmid agreed. The defense attorney also said it’s impossible to know the concentration of fentanyl in street drugs.

“Every single pill you take, it becomes a unique experience for the person, right?” Isenschmid agreed.

In his own turn on the stand, Tobin used simple language, explaining that when the airway narrows, breathing becomes far more difficult, like “breathing through a drinking straw.”

At one point, the doctor loosened his tie and placed his hands on his own neck and the back of his head to demonstrate how the airway works, inviting the jurors to examine their own necks. Most of them did so, though the judge later told them they didn’t have to.

The expert calculated that at times when Chauvin was in a near-vertical position, with his toes off the ground, half of Chauvin’s body weight with his gear included — or 91.5 pounds (41.5 kilograms) — was directly on Floyd’s neck.

He said it appeared that Floyd was getting enough oxygen to keep his brain alive for about the first five minutes, because he was still speaking. Tobin said that where Chauvin had his knee after the five-minute mark was not that important, because at that point Floyd had already suffered brain damage.

Chauvin’s attorney has repeatedly shown the jury still images from the video that he said depicted Chauvin’s knee on Floyd’s shoulder blade, not his neck. But nearly all of those images were captured after the five-minute mark, according to the time stamps.