Small decorations around Erica Lopez’s childhood home remind her of her mother’s love for any holiday. At the end of a season, Maria Lopez would go to Target to buy discounted decorations to put away for the next year.

“She had plates in the shape of snowflakes for Christmas, turkeys for Thanksgiving, hearts for Valentine’s Day,” Erica Lopez said. “That little touch that my mom always made special for the grandkids and her big kids — she still even made us Easter baskets in my thirties.”

Maria Lopez was 56 years old when she died in early December because of complications from the coronavirus. Her husband, 58-year-old Guadalupe Lopez, had died just three weeks before.

“They were high school sweethearts,” Erica Lopez said. “They were always together. They were so in love.”

Lupe, as he was known, was a police dispatcher in Chicago and a beloved little league baseball coach. Maria Lopez ran her own income tax business in Little Village.

Erica Lopez says the loss has devastated her family in more ways than one.

“It’s tough on top of losing your parents and then having to pay combined over 30 grand for two funerals,” she said. “I mean, I look at it kind of like a storm, right? Like it’s coming at you from all sides between. Your job and unemployment. Obviously the devastation of losing your parents.”

In Chicago, Black and Latino residents have been over-represented in the city’s total number of COVID-19 cases and deaths.

“Historically, Black and brown communities have been victims of decades of system racism and discrimination,” said Dr. Geraldine Luna, medical director of the COVID-19 Response Bureau at the Chicago Department of Public Health. “Our marginalized and segregated communities face the harshest conditions based on the social determinants of health working against us. Our communities are in the middle of health care deserts, food deserts, limited access public transportation or no access at all.”

At the beginning of the pandemic, community leaders and aldermen lamented the lack of adequate testing in the communities that the city would later learn were the hardest hit.

“I can tell you even trying to get tested has been more than a feat in my own community,” Richmond said. “I took a COVID test that typically should come back in a couple of days. It took almost two weeks.” 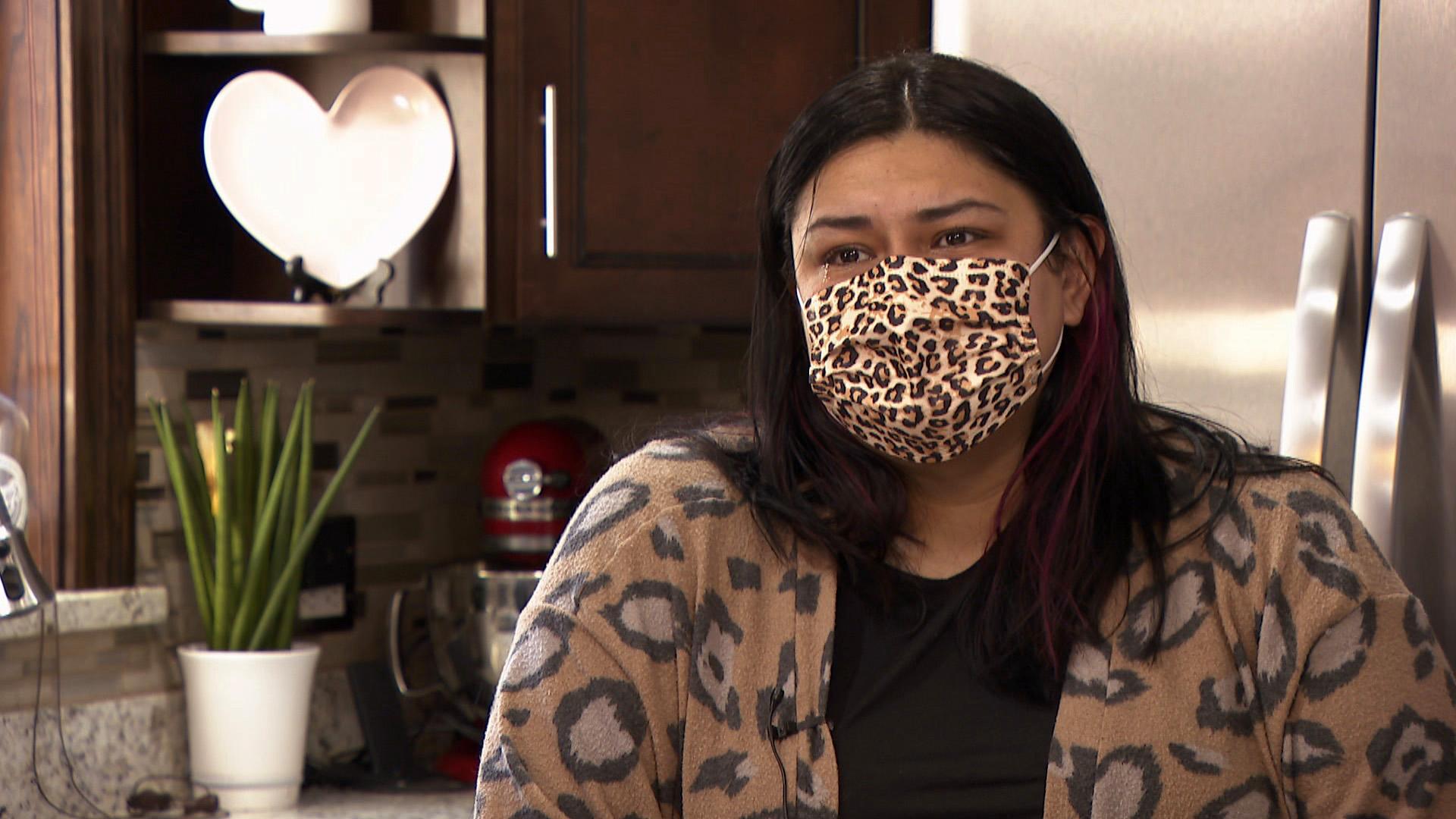 Erica Lopez speaks with “Chicago Tonight” about the death of her mother and father, who both contracted COVID-19. (WTTW News)

The disproportionate impact of COVID-19 on Black and brown communities in Chicago is the reason the city started its Protect Chicago Plus initiative. Partnering with local organizations, the city is rolling out the coronavirus vaccine to 15 of Chicago’s hardest hit communities.

Esperanza Health Centers and Enlace Chicago are hosting one of these vaccine sites in Little Village. Any Little Village residents who are 18 or over can get the vaccine.

Little Village has about 75,000 residents; 44% are uninsured and 25% to 30% are undocumented, meaning many don’t have access to primary care providers, Nuques said. This makes vaccine sites like at Enlace Chicago a necessity.

Elizabeth Tapia scheduled vaccine appointments for both of her parents, and herself.

“I was trying to find them an appointment, kinda tough,” Tapia said. “I would think easier, here’s my 70-something year old parents, take ‘em, but it’s harder than what people think.”

The Protect Chicago Plus program goes door-to-door, meeting residents in the most vulnerable communities, Luna said.

The pandemic also caused unemployment rates to soar, more than tripling for the Latino community in Illinois at 12% in 2020, and more than 14% for Black Illinoisans, according to data collected by the Heartland Alliance.

At the Ring of Hope’s food pantry in Greater Grand Crossing on Chicago’s South Side, the need is evident by the cars that wrap around the block.

Director of the food pantry, Tejuanea Rene White, says need has nearly tripled during the pandemic. Ring of Hope gives out around 30,000 pounds of food a week.

“Just pray for better,” White said. “It’s hard. It’s really hard. So many people that have lost jobs and businesses and families and friends and it’s a really, it’s a really hard thing. We really have to come together, and continue to do as much as we can.”

A recent AP-NORC poll found that about 6 in 10 Hispanic or Latino households say they are still facing the impacts of income loss from the pandemic, about 5 in 10 Black households say the same, compared to 4 in 10 white households.

“The economic impacts have been devastating,” said Dr. Helene Gayle, CEO of the Chicago Community Trust. “We know that Black and brown communities went into this more economically fragile and are communities that have been the most hard hit whether its unemployment, loss of income from having to close small businesses.”

The Chicago Community Trust, with 25 corporate and philanthropic partners, launched Together We Rise in the fall. It’s an initiative that aims to build an equitable economic recovery. The plan includes three efforts: a philanthropic fund, public policy and system changes and equitable business practices in the private sector.

Other support like the latest federal stimulus also aim to help Americans financially impacted by the pandemic. One possible looming crisis is housing, as Gov. J.B. Pritzker has extended the moratorium on evictions several times in the past year.

“We’ve got a staggering statistic. Ten million Americans are behind on rent payments, according to the Census Bureau, and that’s scary in terms of the level of evictions we’re facing if we don’t fix that,” said Horacio Mendez, president and CEO of the Woodstock Institute.

While there is federal and state rental assistance coming the way of landlords and renters, they don’t have it just yet, he said.

“The problem is that those funds are just now starting to be accessed by [landlords] and their tenants, so it’s gonna take months for the money to flow to the tenants and the landlords who need it.” Mendez said.

With the vaccine on the horizon, Erica Lopez has a bit of hope for an end to the pandemic, but given her own experience, she fears more people will die before it does.

“It’s simple. It’s not hard to wear your mask, stay home, wash your hands,” she said. “It’s just senseless to continue spreading this virus and just being so careless, because then there’s people like us who tried everything in our power to not contract the virus we did somehow.”