Plus: Congress members react to impeachment trial on ‘Chicago Tonight’

WASHINGTON (AP) — Donald Trump’s historic second impeachment trial opened Tuesday with graphic video showing the former president whipping up a rally crowd to march to the Capitol and “fight like hell” against his reelection defeat, followed by images of the deadly attack on Congress  that came soon after.

In an early test of the former president’s defense, Trump’s team lost a crucial bid to halt the trial on constitutional grounds. Senators confirmed, 56-44, their jurisdiction over the trial, the first of a president no longer in office. While six Republican senators joined the Democrats in proceeding, the tally showed how far prosecutors have to go to win conviction, which requires a two-thirds threshold of 67 senators.

Tuesday’s vote was on whether a former president could be tried after leaving office.

House Democrats prosecuting the case told senators they were presenting “cold, hard facts” against Trump, who is charged with inciting the mob siege of the Capitol to overturn the election he lost to Democrat Joe Biden.

Senators sitting as jurors, many who themselves fled for safety that day, watched the jarring video of Trump supporters battling past police to storm the halls, Trump flags waving.

“That’s a high crime and misdemeanor,” declared Rep. Jamie Raskin, D-Md., in opening remarks. “If that’s not an impeachable offense, then there’s no such thing.”

Trump is the first president to face impeachment charges after leaving office and the first to be twice impeached. The Capitol siege stunned the world as hundreds of rioters ransacked the building to try to stop the certification of Biden’s victory, a domestic attack on the nation’s seat of government unlike any in its history. Five people died.

Acquittal is likely, but the trial will test the nation’s attitude toward Trump’s brand of presidential power, the Democrats’ resolve in pursuing him, and the loyalty of Trump’s Republican allies defending him.

Trump’s lawyers are insisting that he is not guilty of the sole charge of “incitement of insurrection,”  his fiery words just a figure of speech as he encouraged a rally crowd to “fight like hell” for his presidency. But prosecutors say he “has no good defense” and they promise new evidence.

Security remained extremely tight at the Capitol on Tuesday, a changed place after the attack, fenced off with razor wire with armed National Guard troops on patrol. The nine House managers walked across the shuttered building to prosecute the case before the Senate.

White House press secretary Jen Psaki said Biden would not be watching the trial of his predecessor.

“Joe Biden is the president, he’s not a pundit, he’s not going to opine on back and forth arguments,” she said.

With senators gathered as the court of impeachment, sworn to deliver “impartial justice,” the trial started with debate and a vote over whether it’s constitutionally permissible to prosecute Trump after he is no longer in the White House. 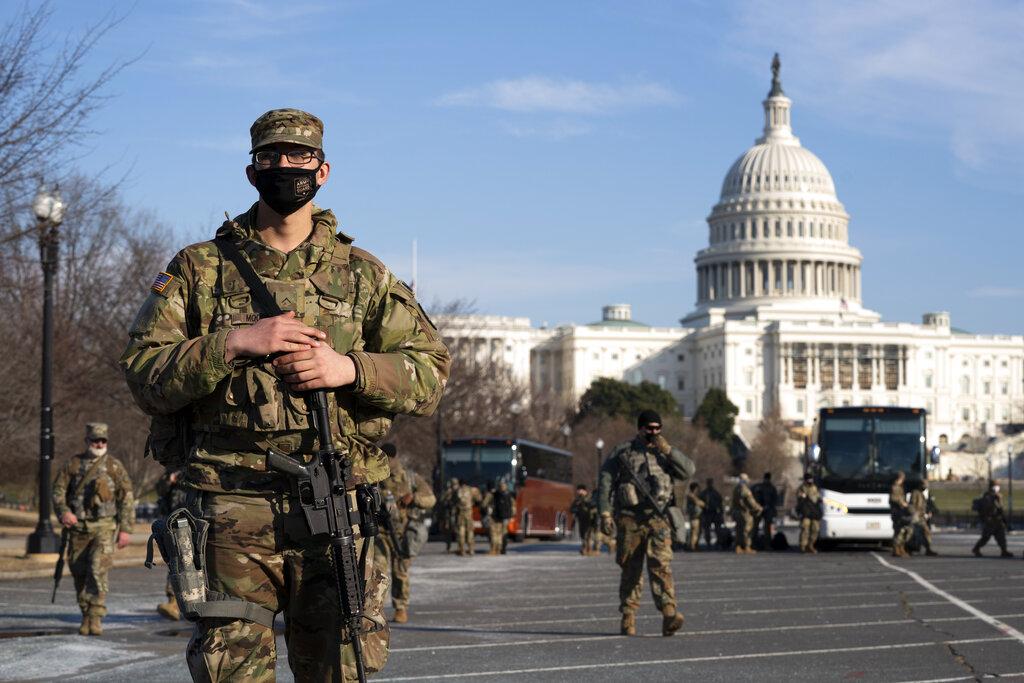 Members of the national guard patrol the area outside of the U.S. Capitol during the impeachment trial of former President Donald Trump at Capitol Hill in Washington, Tuesday, Feb. 9, 2021. (AP Photo / Jose Luis Magana)

Trump’s defense team has focused on that question, which could resonate with Republicans eager to acquit Trump without being seen as condoning his behavior.

Lead lawyer Bruce Castor said that no member of the former president’s defense team would do anything but condemn the violence of the “repugnant” attack, and “in the strongest possible way denounce the rioters.”

Yet Trump’s attorney appealed to the senators as “patriots first,” and encouraged them to be “cool headed” as they assess the arguments.

At one pivotal point, Raskin told the personal story of bringing his family to the Capitol the day of the riot, to witness the certification of the Electoral College vote, only to have his daughter and son-in-law hiding in an office, fearing for their lives.

Trump attorney David Schoen turned the trial toward starkly partisan tones, the defense showing its own video of Democrats calling for the former president’s impeachment.

Schoen said Democrats are fueled by a “base hatred” of the former president and “seeking to eliminate Donald Trump from the American political scene.”

It appears unlikely that the House prosecutors will call witnesses, in part because the senators were witnesses themselves. At his Mar-a-Lago club in Florida, Trump has declined a request to testify.

Presidential impeachment trials have been conducted only three times before, leading to acquittals for Andrew Johnson, Bill Clinton and then Trump last year.

Timothy Naftali, a clinical associate professor at New York University and an expert on impeachment, said in an interview, “This trial is one way of having that difficult national conversation about the difference between dissent and insurrection.”

The first test Tuesday was on the constitutionality of the trial, signaling attitudes in the Senate. Six Republicans joined with Democrats pursue the trial, just one more than on a similar vote last week. Bill Cassidy of Louisiana added to the ranks of Susan Collins of Maine, Lisa Murkowski of Alaska, Mitt Romney of Utah, Ben Sasse of Nebraska and Pat Toomey of Pennsylvania.

The House prosecutors argued there is no “January exception” for a president on his way out the door. Rep. Joe Neguse, D-Colo., referred to the corruption case of William Belknap, a war secretary in the Grant administration, who was impeached, tried and ultimately acquitted by the Senate after leaving office. 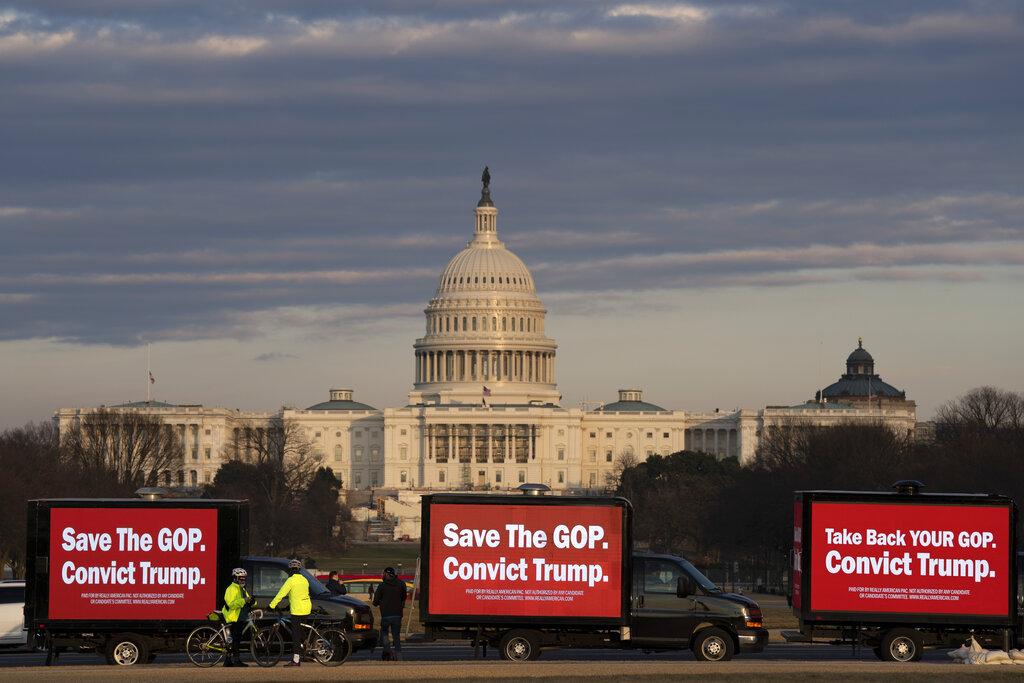 Billboard trucks parked on the National Mall near of the U.S. Capitol during the impeachment trial of former President Donald Trump in Washington, Tuesday, Feb. 9, 2021. (AP Photo / Jose Luis Magana)

Trump’s case is hardly a run of the mill corruption charge, he said, but incitement of insurrection. If Congress stands by, “it would invite future presidents to use their power without any fear of accountability.”

In filings, lawyers for the former president lobbed a wide-ranging attack against the House case, suggesting Trump was simply exercising his First Amendment rights and dismissing the trial as “political theater” on the same Senate floor invaded by the mob.

Because of the COVID-19 crisis, senators were allowed to spread out, including in the “marble room” just off the Senate floor, where proceedings are shown on TV, or even in the public galleries above the chamber. Most were at their desks on the opening day, however.

Presiding was not the chief justice of the United States, as in previous presidential impeachment trials, but the chamber’s senior-most member of the majority party, Sen. Patrick Leahy of Vermont.

Under an agreement between Senate Majority Leader Chuck Schumer and Republican leader Mitch McConnell, the substantive opening arguments will begin at noon Wednesday, with up to 16 hours per side for presentations. The trial is expected to continue into the weekend.

Trump’s second impeachment trial  is expected to diverge from the lengthy, complicated affair of a year ago. In that case, Trump was charged with having privately pressured Ukraine to dig up dirt on Biden, then a Democratic rival for the presidency.

This time, Trump’s “stop the steal” rally rhetoric and the storming of the Capitol played out for the world to see.

The Democratic-led House impeached the president swiftly, one week after the attack. Five people died, including a woman shot by police inside the building and a police officer who died the next day of his injuries.