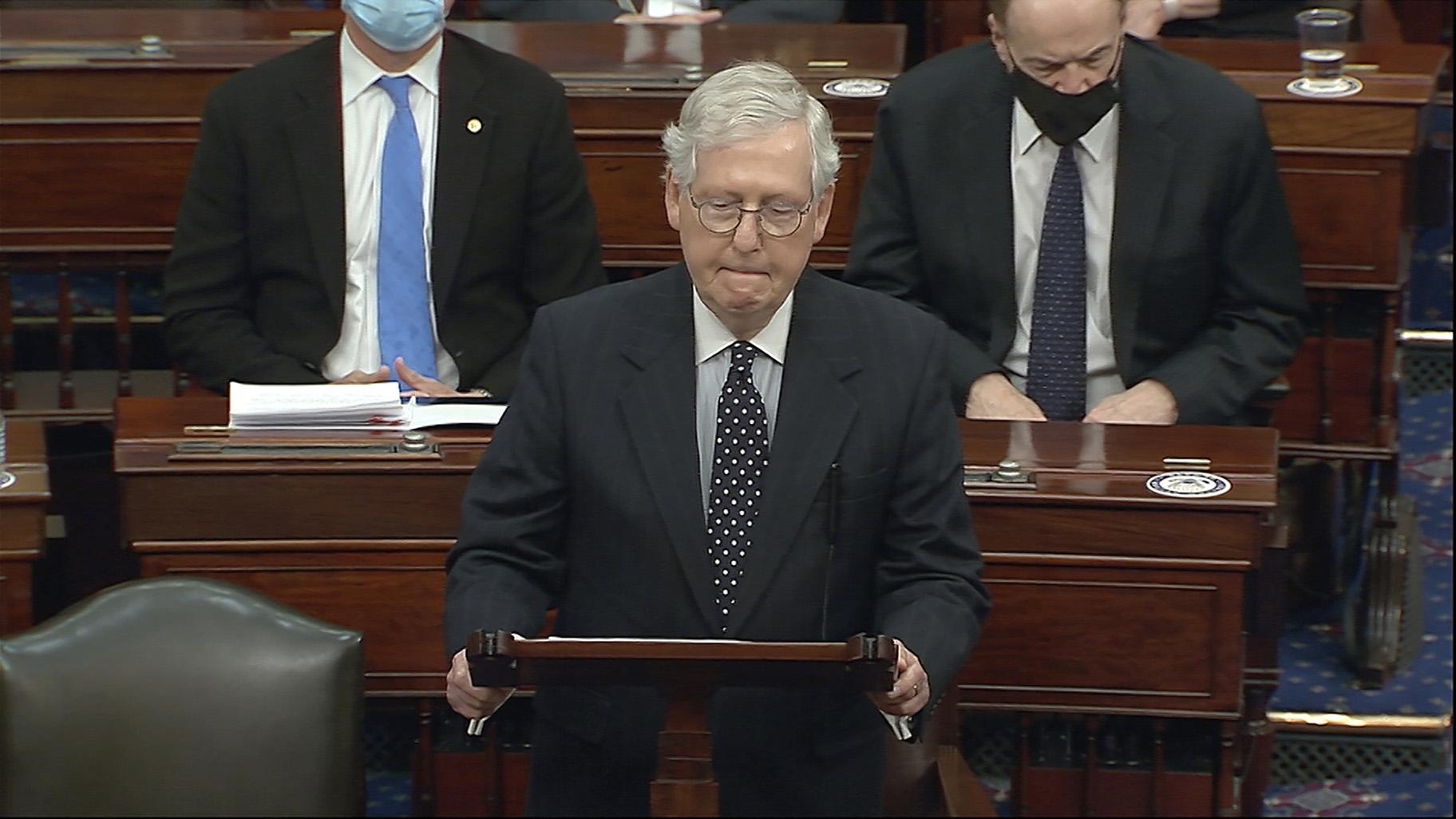 In this image from video, Senate Majority Leader Mitch McConnell of Ky., speaks as the Senate reconvenes after protesters stormed into the U.S. Capitol on Wednesday, Jan. 6, 2021. (Senate Television via AP)

WASHINGTON (AP) — Senate Majority Leader Mitch McConnell on Wednesday blocked a quick Senate impeachment trial for President Donald Trump but did not rule out that he might eventually vote to convict Trump.

A spokesman for McConnell, R-Ky., said McConnell had informed Democrats that he would block an effort by Senate Minority Leader Chuck Schumer, D-N.Y., to quickly call the chamber back into emergency session to put Trump on trial. With the House poised to impeach Trump later Wednesday, that means Trump’s Senate trial was all but certain to be delayed until after Joe Biden’s inauguration as president on Jan. 20.

Yet in a letter to his GOP colleagues, McConnell acknowledged he had not made up his mind about whether Trump should be convicted of the House’s charge that he incited insurrection by exhorting supporters who violently attacked the Capitol last week, resulting in five deaths and a disruption of Congress.

“I have not made a final decision on how I will vote and I intend to listen to the legal arguments when they are presented to the Senate,” McConnell wrote.

McConnell’s statement was a stark contrast to the support — or at times, silence — he has shown for much of what Trump has done or said during his presidency. McConnell will be Washington’s most powerful Republican once Democrat Biden is inaugurated, and McConnell’s increasingly chilly view of Trump could make it easier for other GOP lawmakers to turn against Trump.

Earlier Wednesday, a GOP strategist said McConnell has told people he thinks Trump perpetrated impeachable offenses. McConnell also saw House Democrats’ drive to impeach Trump as an opportune moment to distance the GOP from the tumultuous, divisive outgoing president, according to the strategist, who spoke on condition of anonymity to describe private conversations.

McConnell’s views were first reported by The New York Times.

In addition, McConnell spoke to major Republican donors last weekend to assess their thinking about Trump and was told that they believed Trump had clearly crossed a line, the strategist said. McConnell told them he was finished with Trump, according to the consultant.

McConnell’s alienation from Trump, plus the readiness of modest but significant numbers of House Republicans poised to vote to impeach the president, underscored how the GOP’s long, reflexive support and condoning of Trump’s actions was eroding.

The Senate is in recess and isn’t scheduled to hold a business session until Jan. 19, the day before Biden’s inauguration. By law, the Senate can be summoned to return for an emergency session if the two party leaders, McConnell and Schumer, agree.

Schumer has called for an emergency Senate meeting so it can remove Trump from office before his term expires, citing potential, unpredictable problems that Trump could cause.

The Democratic-led House moved Wednesday toward certain approval of an impeachment article accusing Trump of inciting insurrection, an unprecedented second impeachment of his clamorous presidency. Trump exhorted a throng of his followers to march on the Capitol last Wednesday, where they disrupted Congress’ formal certification of Biden’s win in a deadly riot that produced widespread damage.

McConnell is looking out for his party’s long-term future, but in the short term moving toward a political divorce from Trump could mean that congressional Republicans will face challenges in GOP primaries.

It is unclear how many Republicans would vote to convict Trump in a Senate trial, but it appears plausible that several would. So far, Sen. Lisa Murkowski, R-Alaska, has said she wants Trump to resign and Sen. Ben Sasse, R-Neb., has said he would “definitely consider” House impeachment articles.

Complicating GOP thinking about Trump’s second impeachment is that Republicans will be defending 20 of the 34 Senate seats up for election in 2022. Thanks to Democratic victories this month in two Georgia runoffs, Democrats are about to take control of the chamber by 50-50, with Vice President-elect Kamala Harris casting tie-breaking votes.

Speaking out against impeachment Wednesday was Sen. Lindsey Graham, R-S.C. A once-bitter Trump foe, Graham became one of his closest allies during his presidency, then lambasted him over last week’s Capitol invasion but has since spent time with Trump.

Impeaching Trump now would “do great damage to the institutions of government and could invite further violence,” Graham said in a statement. He said Trump’s millions of backers “should not be demonized because of the despicable actions of a seditious mob,” but he did not specifically defend Trump’s actions last week.

“If there was a time for America’s political leaders to bend a knee and ask for God’s counsel and guidance, it is now. The most important thing for leaders to do in times of crisis is to make things better, not worse,” Graham said.

When the Senate voted against removing Trump in February after the House impeached him for pressuring Ukraine to provide political dirt on Biden, Sen. Mitt Romney, R-Utah, was the only Republican who cast a vote to oust him.

The Capitol on Wednesday increasingly resembled a heavily defended compound as law enforcement braced for the possibility of more attacks by armed Trump supporters. The Capitol and nearby office buildings were surrounded by 7-foot-tall fencing and armed National Guard troops patrolled its grounds.

Trump has falsely insisted that November’s presidential election was stolen from him by fraud. Those allegations have been rejected by state officials of both parties, state and federal courts and members of his own administration.