House Races to Oust Trump; He Blames Accusers for US ‘Anger’

WASHINGTON (AP) — The U.S. House rushed ahead Tuesday toward impeaching President Donald Trump for the deadly Capitol attack, taking time only to try to persuade his vice president to push him out first. Trump showed no remorse, blaming impeachment itself for the “tremendous anger” in America.

Already scheduled to leave office next week, Trump is on the verge of becoming the only president in history to be twice impeached. His incendiary rhetoric at a rally ahead of the Capitol uprising is now in the impeachment charge against him, even as the falsehoods he spread about election fraud are still being championed by some Republicans.

The House convened Tuesday night to vote on urging Vice President Mike Pence to invoke the 25th Amendment to the Constitution to remove Trump with a Cabinet vote. But shortly before that, Pence said he would not do so in a letter to House Speaker Nancy Pelosi.

He said that it would not be in the best interest of the nation or consistent with the Constitution and that it was “time to unite our country as we prepare to inaugurate President-elect Joe Biden.”

Meanwhile, three three Republican lawmakers, including third-ranking House GOP leader Liz Cheney of Wyoming, announced they would vote to impeach Trump on Wednesday, cleaving the Republican leadership, and the party itself.

As lawmakers reconvened at the Capitol for the first time since the bloody siege, they were bracing for more violence  ahead of Democratic President-elect Joe Biden’s inauguration, Jan. 20.

“All of us have to do some soul searching,” said Democratic Rep. Jamie Raskin of Maryland, imploring other Republicans to join.

Trump, meanwhile, warned the lawmakers off impeachment  and suggested it was the drive to oust him that was dividing the country.

In his first remarks to reporters since last week’s violence, the outgoing president offered no condolences for those dead or injured, only saying, “I want no violence.”

With Pence’s agreement to invoke the 25th Amendment ruled out, the House will move swiftly to impeachment on Wednesday.

Trump faces a single charge — “incitement of insurrection” — in the impeachment resolution after the most serious and deadly domestic incursion at the Capitol in the nation’s history.

During an emotional debate ahead of the House action, Rep. Norma Torres, D-Calif., urged her Republican colleagues to understand the stakes, recounting a phone call from her son as she fled during the siege.

But Rep. Jim Jordan, R-Ohio, a top Trump ally just honored this week at the White House, refused to concede that Biden won the election outright.

Two Republicans, Reps. John Katko of New York, a former federal prosecutor, and Adam Kinzinger of Illinois, an Air Force veteran, announced they, too, would vote to impeach.

A handful of other House Republicans could join in the impeachment vote, but it’s not clear there would be a the two-thirds vote needed to convict from the narrowly divided Senate, though some Republicans say it’s time for Trump to resign.

The unprecedented events, with just over a week remaining in Trump’s term, are unfolding in a nation bracing for more unrest. The FBI has warned ominously of potential armed protests in Washington and many states  by Trump loyalists ahead of Biden’s inauguration and Capitol Police warned lawmakers to be on alert. The inauguration ceremony on the west steps of the Capitol will be off limits to the public. 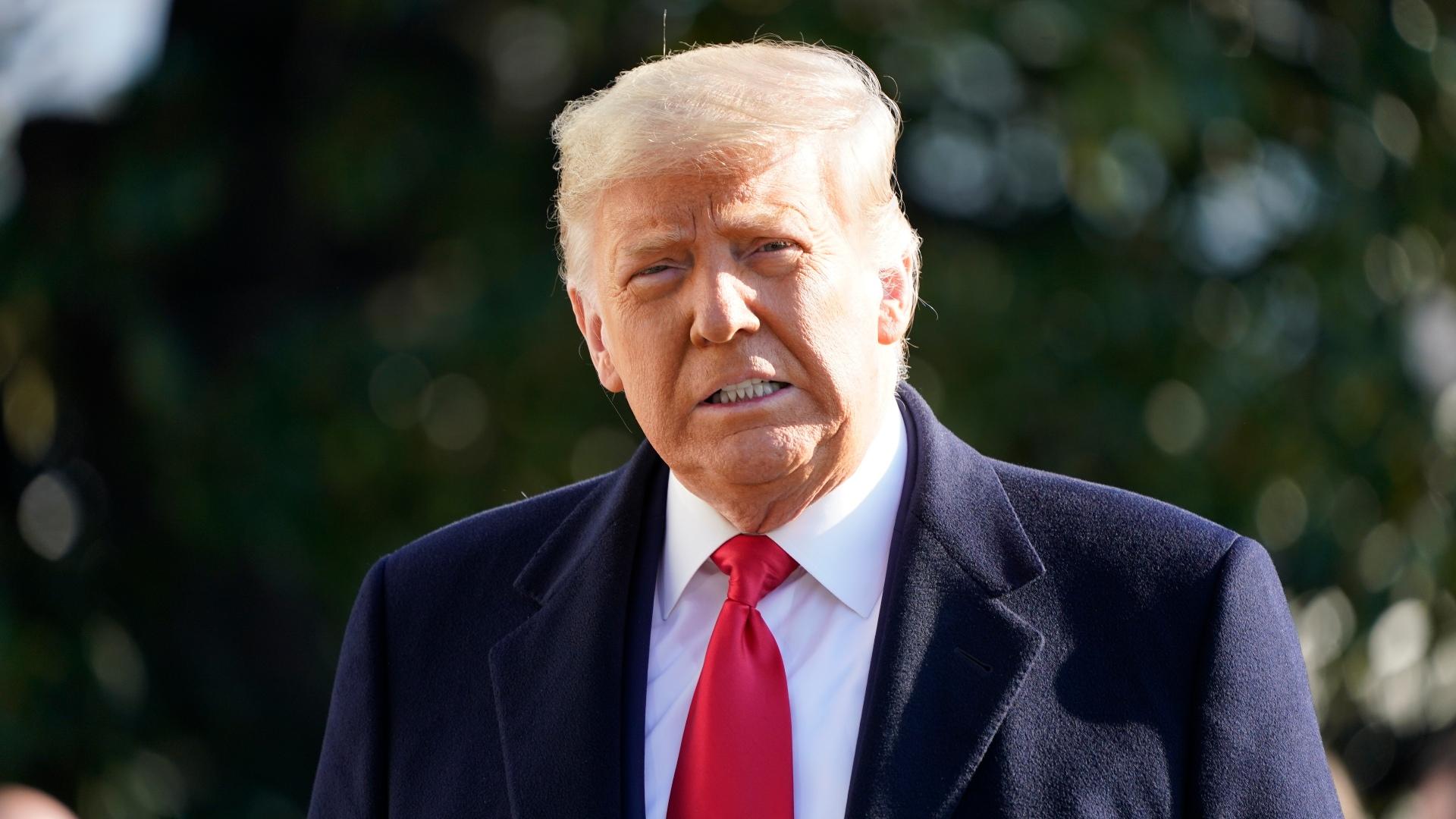 President Donald Trump speaks to the media before boarding Marine One on the South Lawn of the White House, Tuesday, Jan. 12, 2021 in Washington. (AP Photo / Gerald Herbert)

Lawmakers were required to pass through metal detectors to enter the House chamber, not far from where Capitol police, guns drawn, had barricaded the door against the rioters. Some Republican lawmakers complained about it.

A Capitol police officer died from injuries suffered in the riot, and police shot a woman during the violence. Three other people died in what authorities said were medical emergencies.

In the Senate, Republican Pat Toomey of Pennsylvania joined GOP Sen. Lisa Murkowski of Alaska over the weekend in calling for Trump to “go away as soon as possible.”

Sen. Rob Portman, R-Ohio, did not go that far, but on Tuesday called on Trump to address the nation and explicitly urge his supporters to refrain from further violence. If not, he said, Trump “will bear responsibility.”

No member of the Cabinet has publicly called for Trump to be removed from office through the 25th Amendment.

Biden has said it’s important to ensure that the “folks who engaged in sedition and threatening the lives, defacing public property, caused great damage — that they be held accountable.”

Fending off concerns that an impeachment trial would bog down Biden’s first days in office, the president-elect is encouraging senators to divide their time between taking taking up his priorities of confirming his nominees and approving COVID relief while also conducting the trial.

Senate Democratic leader Chuck Schumer suggested in a letter to colleagues Tuesday the chamber would do both.

As Congress resumed, an uneasiness swept the halls. More lawmakers tested positive for COVID-19 after sheltering during the siege. Many lawmakers were voting by proxy rather than come to Washington, a process that was put in place last year to limit the health risks of travel.

One of Trump’s closest allies in Congress, House Republican leader Kevin McCarthy was among those echoing the president, saying “impeachment at this time would have the opposite effect of bringing our country together.”

House Democrats say they have the votes for impeachment. The impeachment bill drafted by Reps. David Cicilline of Rhode Island and Ted Lieu of California, during the riot lockdown, and joined by Raskin of Maryland and Jerrold Nadler of New York draws from Trump’s own false statements about his election defeat to Biden.

Judges across the country, including some nominated by Trump, have repeatedly dismissed cases challenging the election results, and former Attorney General William Barr, a Trump ally, has said there was no sign of widespread fraud.

The impeachment legislation also details Trump’s pressure on state officials in Georgia to “find” him more votes, as well as his White House rally ahead of the Capitol siege, in which he encouraged thousands of supporters last Wednesday to “fight like hell” and march to the building.

The mob overpowered police, broke through security lines and windows and rampaged through the Capitol, forcing lawmakers to scatter as they were finalizing Biden’s victory over Trump in the Electoral College.

While some have questioned impeaching the president so close to the end of his term, there is precedent. In 1876, during the Ulysses Grant administration, War Secretary William Belknap was impeached by the House the day he resigned, and the Senate convened a trial months later. He was acquitted. 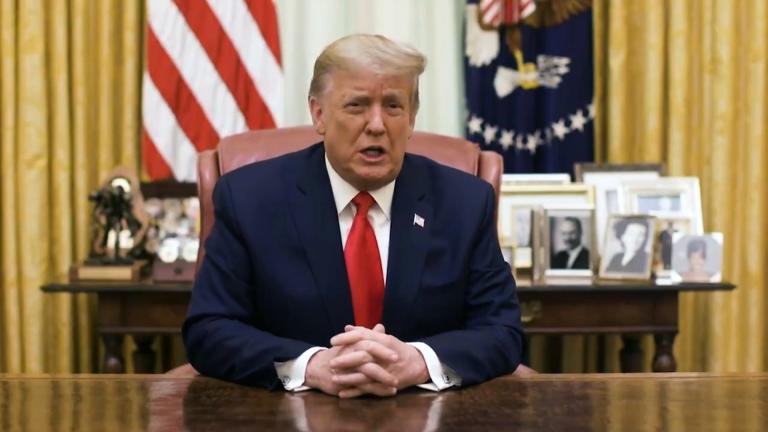 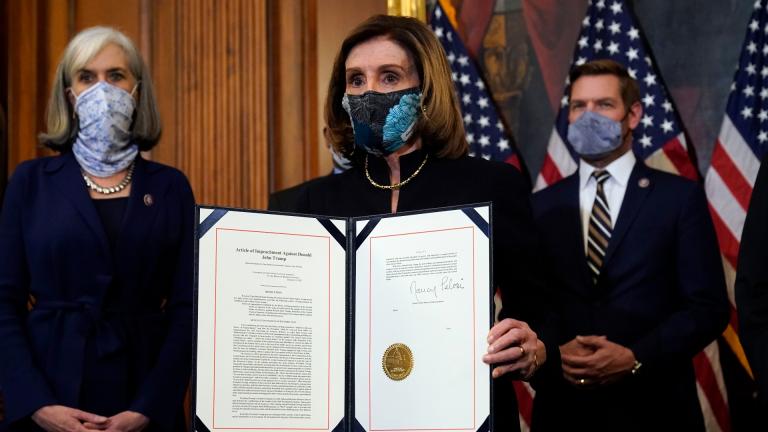 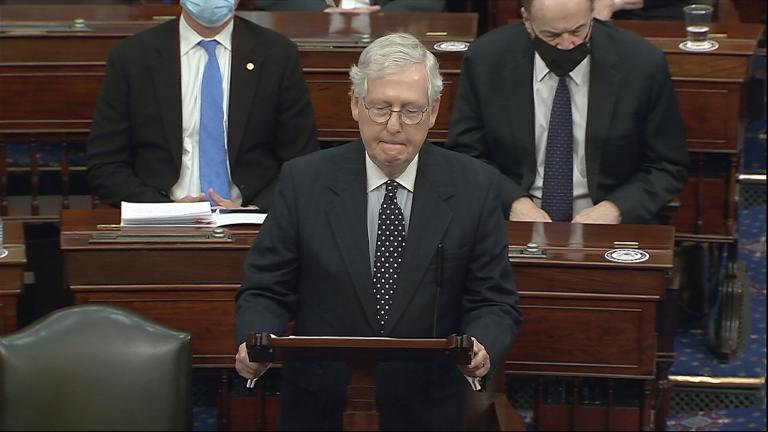 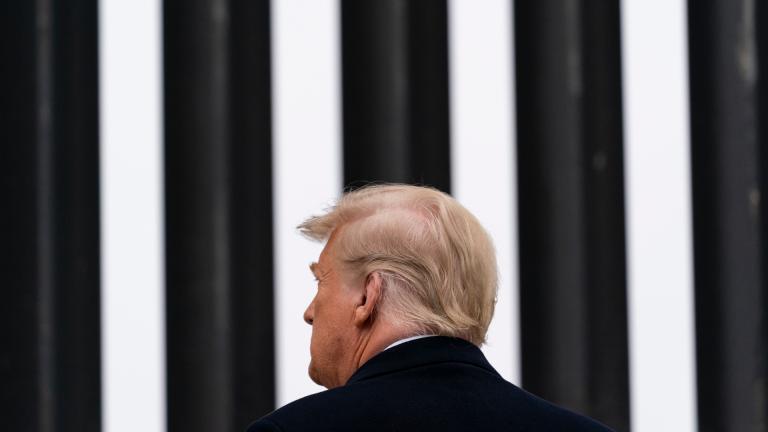