Prosecutors ‘Looking at All Actors,’ Including Trump, As Charges Are Filed Against Capitol Rioters 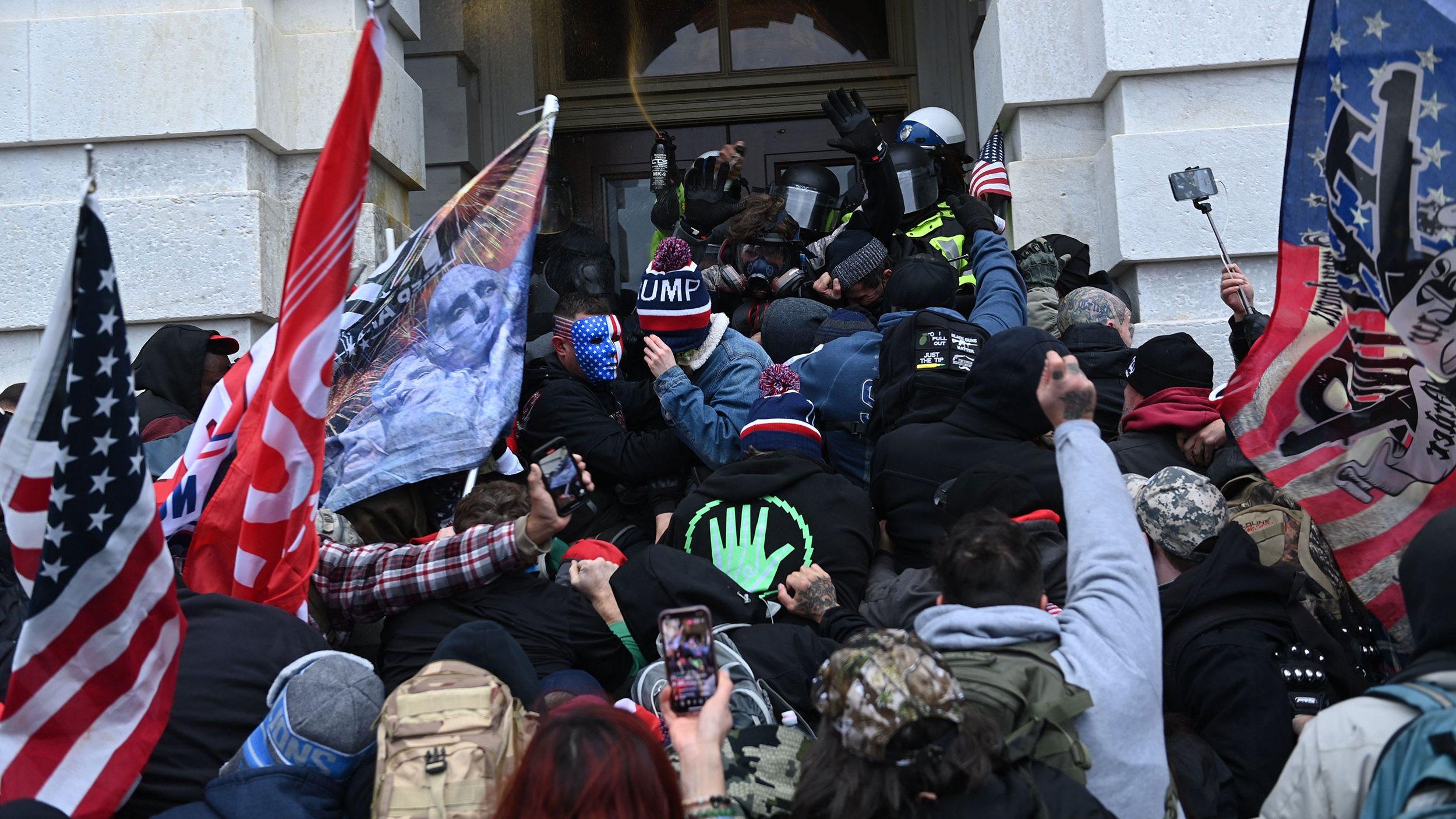 Trump supporters clash with police and security forces as they storm the Capitol in Washington, D.C. on Jan. 6, 2021.(Brendan Smialowski / AFP / Getty Images)

(CNN) — Federal investigators are looking at everyone involved in the unrest at the U.S. Capitol on Wednesday, including the role President Donald Trump played in inciting the crowd, the acting U.S. attorney in Washington, D.C., said Thursday.

Asked directly by a reporter on a press call if investigators were looking at the role Trump played at the rally, acting U.S. Attorney Michael Sherwin said, “We’re looking at all actors here and anyone that had a role and, if the evidence fits the elements of the crime, they’re going to be charged.”

Law enforcement officials in Washington are moving swiftly to bring criminal charges against rioters in Wednesday’s storming of the U.S. Capitol, even as the Capitol Police faces serious questions about how the building was allowed to be breached in the first place.

Federal prosecutors have charged 15 criminal cases stemming from the unrest, Sherwin said, including one man arrested with a military semi-automatic rifle and 11 Molotov cocktails “that were ready to go.”

“Make no mistake about this. It was a very dangerous situation. We are aggressively trying to address these cases as soon as possible,” Sherwin added.

Most of the cases relate to unauthorized entry to the Capitol and the Capitol grounds. He said they were also charging cases involving firearms and theft of property.

“There was a large amount of pilfering at the Capitol. Materials were stolen from several offices,” Sherwin said.

The defendants are expected to appear before a federal Magistrate’s judge later Thursday. Full details of the charges were not yet available. An additional 40 people were charged in D.C. Superior Court, many of them including charges ranging from unlawful entry to certain areas of the Capitol grounds.

FBI digital experts spent the night ingesting surveillance video from the Capitol buildings and the area around the complex and are using software to match images and faces with social media posts showing some of the mayhem. In some cases, people involved in storming the Capitol made social media postings ahead of the rally making clear what their plans were, which federal prosecutors can use to help bring charges.

The first defendants arrested during the Capitol riots appeared in D.C. Superior Court on Thursday, and prosecutors were asking for the judge to block defendants from being in the city, noting they were not residents.

Judge Juliet McKenna ordered Michael Jared Amos, 38 of Florida, to stay out of the District of Columbia until further notice, only allowing him in the capital for court-related appearances. Amos was charged on Wednesday with unlawful entry into the U.S. Capitol building and violating the 6 p.m. curfew set by the mayor. Amos is accused of disobeying the commands of Capitol Police and Metropolitan Police officers, and that he ignored the citywide curfew. He has pleaded not guilty.

Another defendant, David Ross, 33, of Massachusetts, pleaded not guilty to unlawful entry and violating the 6 p.m. curfew. He also was ordered by the judge to stay away from Washington.

Acting Attorney General Jeffrey Rosen said in a statement Thursday that “we will continue to methodically assess evidence, charge crimes and make arrests in the coming days and weeks to ensure that those responsible are held accountable under the law.”

Rosen and other federal officials are coordinating the response but are also facing questions about why law enforcement appeared unprepared for the onslaught that in many ways had already been telegraphed by Trump and his supporters on social media.

Wednesday’s riots at the Capitol have sparked palpable anger among lawmakers and a host of questions about how the building was so overrun. Lawmakers are vowing to investigate the response and calling for firings, perplexed at the lack of preparedness among law enforcement given that it had been known for weeks that Trump was promoting a rally that he said was aimed at preventing the certification of President-elect Joe Biden’s win.

House Speaker Nancy Pelosi called for the resignation of U.S. Capitol Police Chief Steven Sund on Thursday, saying she had yet to receive a call from the head of the U.S. Capitol Police. And Pelosi said she had been notified the House Sergeant at Arms, Paul Irving, would be submitting his resignation.

Senate Minority Leader Chuck Schumer said in a statement he planned to fire the Senate Sergeant at Arms, Michael Stenger, when Democrats take the majority after Jan. 20. Stenger, who is in charge of security in the Senate, was appointed by Senate Majority Leader Mitch McConnell, and it was expected that Schumer would eventually replace him. But Schumer is making clear Stenger either needs to resign or be fired in the wake of the events that transpired.

McConnell said in a statement that the riots “represented a massive failure of institutions, protocols, and planning that are supposed to protect the first branch of our federal government.”

The House Appropriations and Administration committees, which both have oversight of the Capitol Police, say they intend to investigate the riots, and multiple congressional aides said “heads should roll” at the Capitol over the security failures.

“This was an unspeakable tragedy and travesty and an enormous security failure,” Rep. Jason Crow, a Colorado Democrat, told CNN’s Anderson Cooper Wednesday. “Massive security failure. I think an awful lot of people should lose their jobs over this, over what has happened.”

More than 18 local, state and federal law enforcement agencies and the National Guard assisted in the response Wednesday, Capitol Police said, and more than 50 Capitol and Metropolitan police officers were injured.

Sund said Thursday that Capitol Police was reviewing the incident and planning that went into it, but largely defended the response. Sund said that Capitol Police and other law enforcement officers were “actively attacked” with metal pipes and other weapons, and that the rioters were “determined to enter into the Capitol Building by causing great damage.”

The rioters breached the Capitol building and the Senate chamber, ransacked the offices of Pelosi and other Capitol offices, and a laptop was stolen from the office of Oregon Sen. Jeff Merkley. One woman was shot by a U.S. Capitol Police officer and later died.

In a video posted to his Twitter page, Merkley said rioters who ransacked his office “smashed the door virtually off its hinges.” The door was unlocked, the Oregon Democrat said.

Merkley said rioters “tore things off the walls,” including art from a renowned artist, and stole a laptop that was sitting on a table. He also showed a cigarette butt that was stamped out and a Trump 2020 flag that was left behind.

“This office is trashed. You can see the debris is all over the floor,” Merkley said.

Washington’s Metropolitan Police Department has made 80 arrests related to unrest this week in downtown Washington, including 68 arrests Wednesday night,, according to a mayor’s spokeswoman. Most of the arrests were made for curfew violations after D.C. Mayor Muriel Bowser imposed a 6 p.m. curfew in the city. Other charges included weapons charges and unlawful entry.

Bowser said at a news conference Thursday it would take time to figure out what happened, but “obviously it was a failure.” She made clear, however, that the D.C. police department’s responsibility was only to assist federal partners when requested.

“We cannot decide for the Capitol, the members of Congress, that we are going to be their police department. But we stand ready to assist them at any case,” she said.

Army Secretary Ryan McCarthy told reporters there had been “discussions” ahead of Wednesday’s events with the Capitol Police, but they did not request D.C. National Guard assistance. He said there would be 6,200 forces from the D.C. National Guard and from neighboring states to support Metropolitan and Capitol Police, and security measures would be in place for at least the next 30 days.

D.C. Attorney General Karl Racine on Thursday said that federal law enforcement officials let down D.C. in handling the rioters Wednesday but notes that it is not in his jurisdiction to prosecute the majority of offenses committed.

“D.C. Law enforcement officers, frankly, they did their jobs. And they went out and afterward, they helped the capitol police restored order and arrested folks pursuant to the curfew order that Mayor Bowser invoked. Our federal partners let us down,” Racine said in an interview Thursday morning on MSNBC’s “Morning Joe.”

Part of the response Thursday includes repairing and building new harder-to-breach fencing around the Capitol west-facing grounds to protect the area to be used for Inauguration ceremonies in two weeks. Trump supporters could be seen Wednesday swarming over the stage where Biden will take the oath of office.

On Wednesday, CNN reported that a law enforcement source confirmed that pipe bombs were found at the headquarters for the Democratic National Committee, Republican National Committee and grounds of the United States Capitol. The source said all the devices were safely detonated by the police. A source told CNN there could be charges related to that as well.

This story has been updated with additional developments.