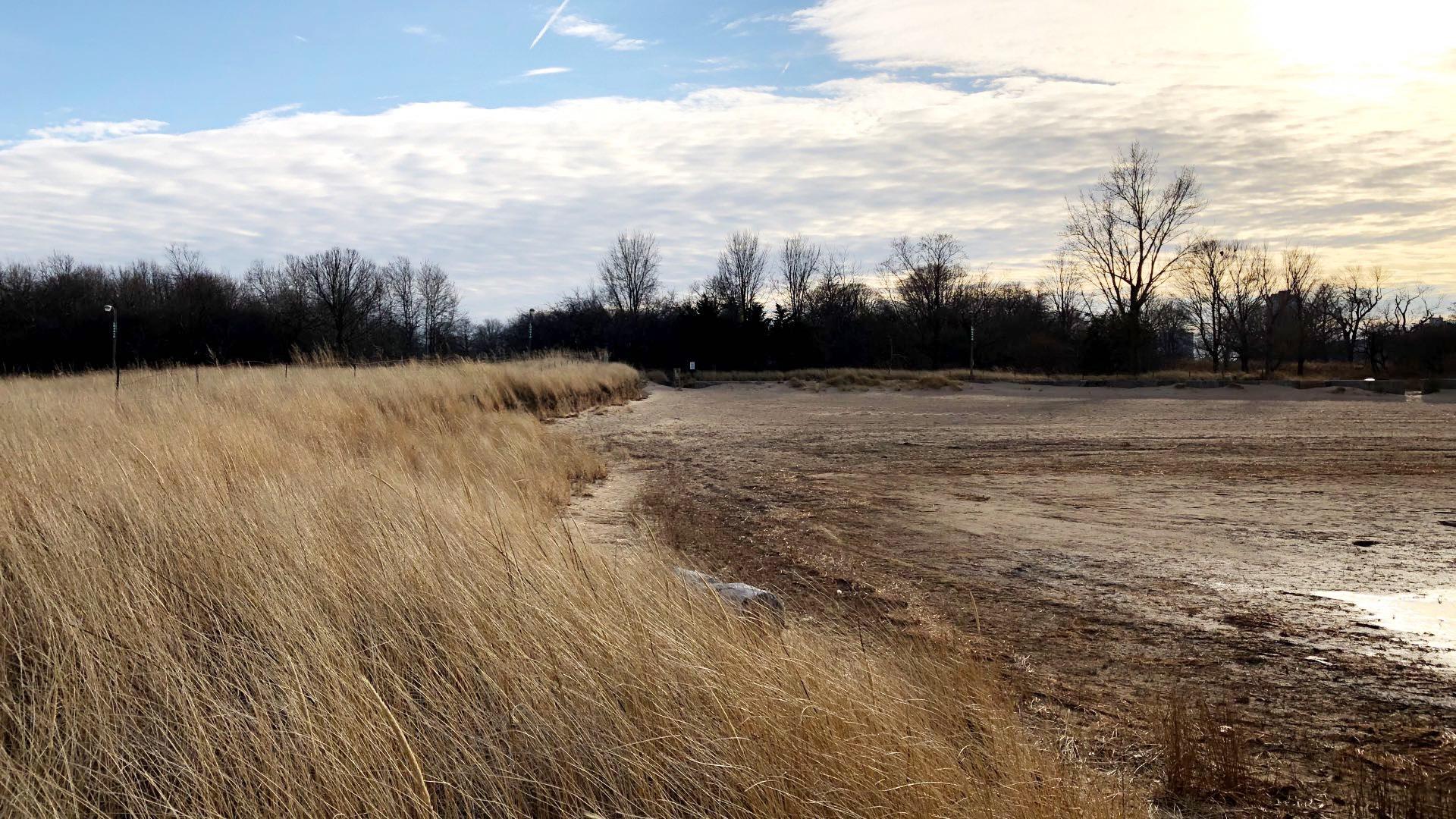 Montrose Beach Dune Natural Area on the left, and the proposed section of Montrose Beach that would be incorporated into the protected area. (Patty Wetli / WTTW News)

Chicago’s birding community is already preparing for the spring return of Monty and Rose, the pair of federally endangered Great Lakes piping plovers that captured national attention two summers ago when they made the surprising choice to nest on Chicago’s lakefront.

Experts have no doubt the lovebirds, now wintering in the south, will wing their way back to Montrose Beach for a third consecutive year. Plovers are quite faithful to a breeding site once they’ve successfully hatched a chick there, birders say, and Monty and Rose have now reared successive broods at Montrose.

What’s less certain is whether the plovers will, in terms of their favored habitat, be upgraded from renters to homeowners.

When the plovers first appeared in Chicago in 2019, they understandably failed to recognize the arbitrary boundary between Montrose Beach, where they settled down, and the adjacent Montrose Beach Dune Natural Area. The latter is protected, with restrictions against heavy recreation. The beach is, well, a beach.

The birds’ unwitting slip-up left them exposed, and it took a small army of dedicated volunteers to secure their nesting site. Beach volleyball players were respectful of the plovers’ incursion into what had been their sand courts, but occasionally had to tiptoe into the birds’ fenced-off ad hoc sanctuary to retrieve a wayward ball.

“It was not a great situation,” said Bob Dolgan, an avid birder who made a movie about Monty and Rose.

In 2020, Monty and Rose seemingly wizened up and built their nest within the dunes’ friendly confines. But once the couple’s chicks hatched, it was back to the beach for the plovers, where an area was again roped off to buffer the birds.

Advocates have asked the Chicago Park District to formally incorporate the portion of Montrose Beach that Monty and Rose call home — roughly an acre and a half — into the boundaries of the dunes. 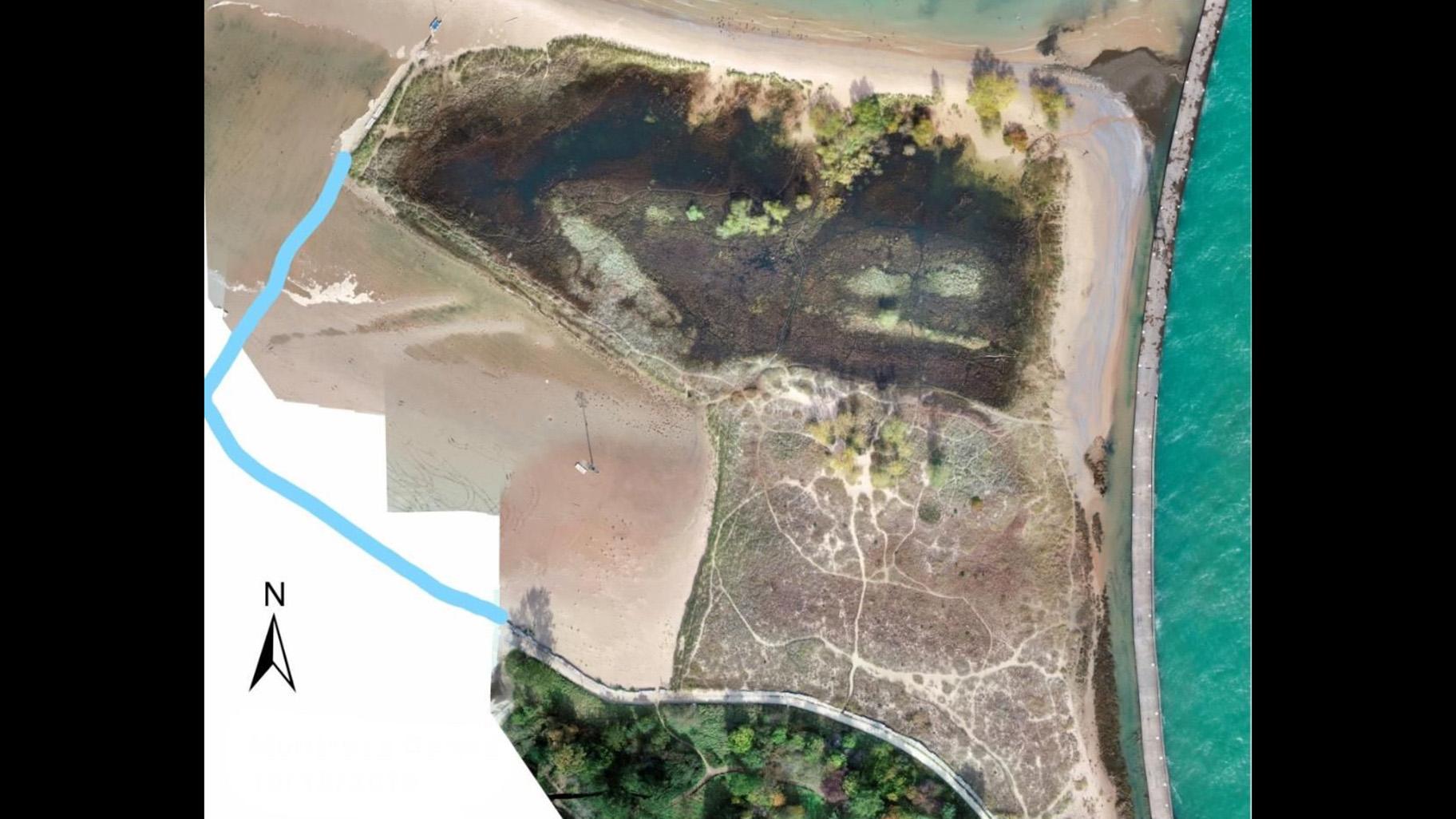 A satellite view of the proposed new boundary (marked in blue) of the Montrose Beach Dune Natural Area (on the right). (Courtesy of Leslie Borns)

Doing so would officially safeguard the plovers’ digs and allow for comprehensive management of the site, where some rare plants have also sprouted on formerly barren land due to lake flooding, according to Leslie Borns, steward of the Montrose Beach Dunes.

“The plovers come in the spring and we have to rush out and put up this fencing. It’s haphazard,” said Borns. “That approach to management makes no sense. It really has become critical habitat. If it were given formal protection, it could be managed much better.””

It was Borns who put the request to the Park District for the added acreage, the type of request she’s only made, and had approved, twice in the past 20 years, she said.

“There is no formal, written-down (request) process,” Borns said. On the first occasion, a Park District staffer OK’d an addition on their own initiative, she said, and in the second instance, Borns gave a “higher-up individual” a tour of the dunes and negotiated a new border.

The Park District confirmed the dunes were last expanded by 1.3 acres in 2011.

“This time, the reasons for the request are much more compelling. There’s this totally new phenomenon of an endangered bird species,” Borns said. “The plovers last year were able to fledge three chicks, which is incredible. Even having one chick is a great outcome. It’s great publicity: The plovers, of all the places, they came to the big city.”

And yet, Borns said, she’s received mixed messages from the Park District, ranging from an outright rejection of the addition — per a conversation Borns had with a staff person around Thanksgiving — to a walking back of that refusal to a noncommittal, “We’ll see.” And that’s where the matter stands today.

In a statement to WTTW News, the Park District said: “We are reviewing the request to formalize the expansion of the Montrose Beach Dunes Natural Area. The Chicago Park District was thrilled that the plovers chose Montrose Beach for a nesting location the past two years, and we are very grateful for the outpouring of support from volunteers and the surrounding community. We are fully committed to protecting the plovers, and we have been working closely with the U.S. Fish and Wildlife Service, Illinois Department of Natural Resources and volunteers to prepare for their return in 2021.”

Borns said she’s mystified that the Park District didn’t jump at the chance to expand the dunes for the plovers. “They would be celebrated as being so committed to nature,” she said.

The lack of assurances from the Park District left Borns anxious enough about the status of the plovers’ habitat to have raised an alarm among her email list of 800 supporters, asking them to go to bat for the plovers and the expansion of the natural area. In the back of her mind is the specter of other uses the Park District has brought forward over the years for the acreage she’d like to have protected: a music fest in 2019, canceled due to Monty and Rose; and a surf park, scuttled in 2016 following community opposition.

Several of those supporters answered her call, speaking in favor of the dunes expansion during the public comment portion of the December meeting of the Chicago Park District Board. Among them was Tamima Itani, of the Illinois Ornithological Society, who’s coordinated plover monitors from dawn to dusk to watch over the birds’ nest.

“Give them the gift of a small parcel of land,” Itani urged.

Pete Leki, ecology director at Waters Elementary and longtime participant in Friends of the Parks' Nature Along the Lake programs, also chimed in on the plovers’ behalf and had his students write letters to the Park District board.

The small natural enclaves on the lakefront are already too few and too far between, Leki said. “Our natural areas act like islands, and they need to be bigger and closer together to guarantee a safe, welcome place … able to sustain biodiversity. These little islands of green are not enough.”

The Park District, in its statement to WTTW News, noted that it needs to balance multiple uses of the city’s lakefront.

“When the plovers are not present, the area in question is also host to a beach volleyball league and is used by kayak and jet ski concessions. Recreational space at all of our beaches, including Montrose Beach, has been reduced by high Lake Michigan water levels,” the Park District said.

For conservationists, the question of which users should be given precedence at Montrose is an easy one to answer: the plovers.

There are other places where people can play volleyball or rent a kayak, but it’s the plovers’ survival that’s hanging in the balance, they argue.

To be clear, the dunes aren’t off limits to people. Activities like walking, bird watching, photography and child’s play are all welcome, just not active sporting.

“With the shrinking of the beaches, there need to be priorities. The habitat should be the priority,” said Borns, noting that the dunes have shrunk from 14 acres down to 9 due to erosion and higher waters.

Some shorebirds migrate upwards of 3,000 miles, and they desperately need pit stops like Montrose Beach Dunes to rest and forage for food, said Dolgan.

“It’s a miracle we can provide that in a city like Chicago,” he said, adding that expanding the dunes would mean “one fewer hurdle these birds face.”

Though Borns has been clear that her request is simply to have 1.5 acres added to the dunes, others, like Leki, would love to see the natural area unshackled and given room to literally go wild all the way to Lake Shore Drive.

“You can’t expect a natural area to act natural if it’s stuck in a shoebox,” he said, though, for the record, he backs Borns’ more measured appeal.

For current Chicago residents, the city’s lakefront — with its beaches and harbors and extensive trails — is an immutable fact. But the shoreline, in its present state, only came into being in the 1930s, the result of a massive buildout that in some places extended the waterfront a mile into the lake, according to a city of Chicago history of the shoreline.

In contrast with today’s manicured, man-made coast, the lakefront, pre-settlement, featured a natural sand edge “with dunes and swales and marshy lowlands,” the city document states.

“If you want a little taste of what Lake Michigan was like before the big city was built up, you get a little sampling of that at Montrose Beach Dunes,” said Dolgan.

But the Montrose dunes aren’t some sort of geological artifact, a remnant of a centuries-old landscape. They are, instead, a lesson in what nature can get up to when left to its own devices.

“The dune created itself,” said Leki, who was among those who witnessed its emergence.

The dunes began to form in 2000, when the Chicago Park District stopped grooming a section of beach that had been exposed by low lake levels. Native dune and wetland plants sprouted, holding more and more sand in place until the growth of the dunes was undeniable.

“We were so impressed by the dynamism, we could watch this thing birth,” Leki said. “It’s amazing the way it morphs. It’s so spectacular every time you go. For me, it’s one thing after another you can be blown away by.”

A portion of the dune is itself endangered — a type of extremely rare, fragile habitat known as a panne, or interdunal wetland. Only 250 acres are left in the world, according to Borns.

And that’s what adds a certain urgency to her request to expand the dunes, as much for the dunes’ sake as for the plovers.

“It would really be a huge missed opportunity to preserve rare flora and fauna,” she said.