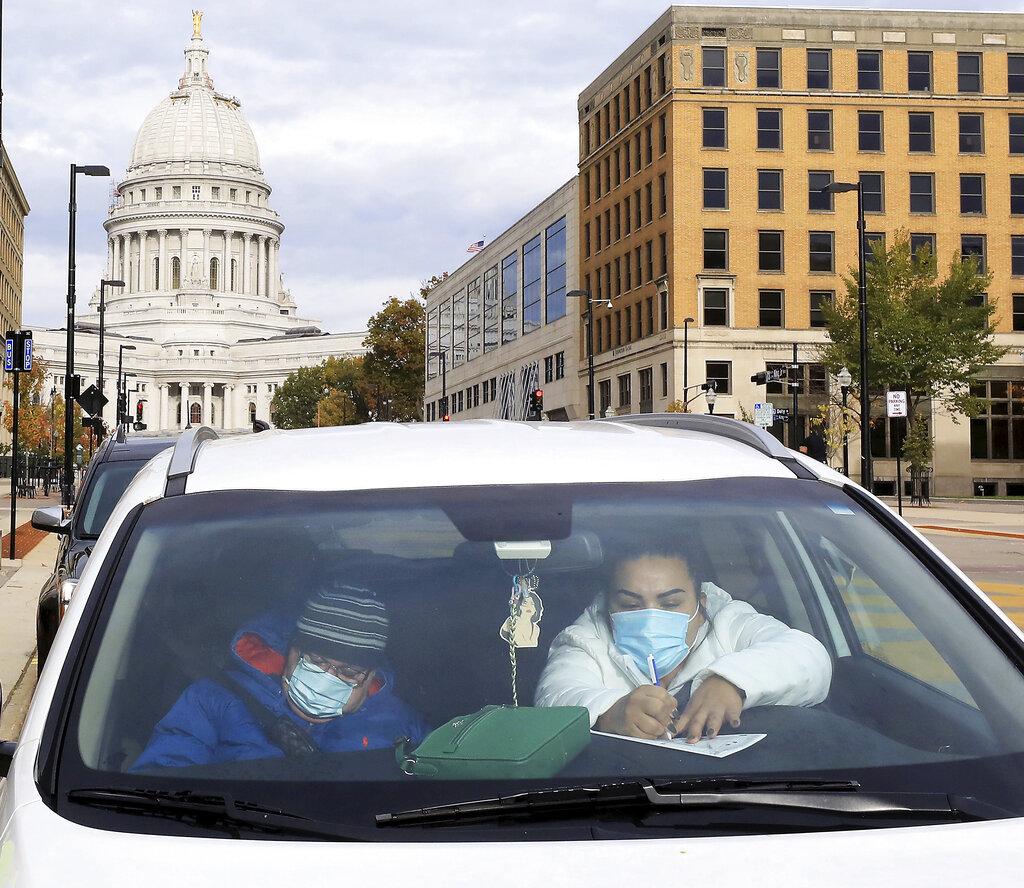 In this Oct. 20, 2020, photo, Evelio Mancera and his daughter, Jennifer Mancera, both residents of Madison, fill out their ballots on the first day of the state’s in-person absentee voting window for the Nov. 3 election outside the city’s City-County Building Tuesday in Madison, Wis. (John Hart / Wisconsin State Journal via AP)

OSHKOSH, Wis. (AP) — Gabe Loiacono is the kind of voter President Donald Trump can ill afford to lose. He lives in a pivotal county of a swing state that is among a handful that will decide the presidency.

A college history professor who last cast a ballot for a Democrat more than 20 years ago, Loiacono is voting for Democrat Joe Biden because he thinks Trump has utterly failed in his handling of the coronavirus pandemic.

“President Trump still does not seem to be taking the pandemic seriously enough. I wish he would,” said Loiacono. He said he never thought of Trump as “all bad” but added, “There is still too much wishful thinking and not enough clear guidance.”

And now the virus is getting worse in states that the Republican president needs the most, at the least opportune time. New infections are raging in Wisconsin and elsewhere in the upper Midwest. In Iowa, polls suggest Trump is in a toss-up race with Biden after carrying the state by 9.4 percentage points four years ago.

“Approval of his handling of COVID is the next-strongest predictor of vote choice,” behind voters’ party affiliation and their overall approval of Trump’s performance as president, Franklin said. “And it’s not just a fluke of a single survey.”

The Centers for Disease Control and Prevention reported Sunday that among U.S. states, Wisconsin had the third highest rate of new cases for the previous seven days. Iowa was 10th.

Trump won Wisconsin’s heavily blue-collar Winnebago County, which includes Oshkosh, in 2016, after Democratic nominee Barack Obama had carried it in 2012. Today, Winnebago is among the top 10 counties where new Wisconsin COVID cases are being reported, according to data collected by Johns Hopkins University and compiled by The Associated Press.

The trend is similar in Iowa. Blue-collar Dubuque County was among the state’s 10 counties with the fastest-growing number of cases per capita over the past two weeks. Trump won the county narrowly after Democrats had carried it since the 1950s.

In Wisconsin, where polling has shown Biden with a slight but consistent advantage, approval of Trump’s handling the pandemic dropped from 51% in March to 41% in October, according to a Marquette University Law School poll. That’s a noteworthy decline considering Trump’s overall approval has fluctuated little and remained in the mid-40s.

Iowans’ view of Trump’s handling of the pandemic is also more negative than positive, according to The Des Moines Register’s Iowa Poll and Monmouth University polls.

The race in Iowa remains very close, though Monmouth poll director Patrick Murray said Trump’s poor rating in Iowa on handling the pandemic “suggests in the decision-making process, the coronavirus is top of mind and decisive.”

The president also continues to insist the country is “rounding the turn” on the virus, an assertion that has drawn rebukes from public health experts, including Dr. Anthony Fauci, the nation’s leading infectious disease specialist. He also blames news media coverage of the outbreak.

“ALL THE FAKE NEWS MEDIA WANTS TO TALK ABOUT IS COVID, COVID, COVID,” Trump tweeted Tuesday. “ON NOVEMBER 4th, YOU WON’T BE HEARING SO MUCH ABOUT IT ANYMORE. WE ARE ROUNDING THE TURN!!!”

During his debate with Biden last week, Trump insisted of the virus, despite the spike in cases: “It will go away. It’s going away.” The comments betrayed the seriousness Trump conveyed during recorded conversations with journalist Bob Woodward in February, when Trump said he “wanted to always play it down” to avoid creating a panic.

On Saturday night, the White House confirmed that Vice President Mike Pence’s chief of staff, Marc Short, had tested positive for COVID-19, after the news of Short’s diagnosis dribbled out. The vice president has showed no signs of curbing his torrid campaign schedule.

“That’s how I read it,” Goeas said. “The only hope it seems is therapeutics will make it less of a killer and eventually the vaccine will be available to everyone. It looked to me like they were just trying to make their position sound like that was always their intent.”

COVID-19 cases also have risen over the past two weeks in Midwestern battlegrounds Michigan, Minnesota and Ohio, though not as sharply as in Wisconsin and Iowa, according to the Johns Hopkins data.

The pandemic is resonating because it touches all Americans personally and most of them economically, said Terry Madonna, director the Franklin and Marshall College Poll and veteran scholar of Pennsylvania politics.

“It’s ubiquitous,” Madonna said. “Maybe it’s not in your own family. But you know someone who had it. You can’t get away from it in the news and in your own life.”

“The job of government is to lead in times of crises,” said Loiacono, 44, masked and standing on his front porch in Oshkosh a few blocks from Lake Winnebago. “The president has admitted he talked much more positively about it because he saw his role as being a cheerleader. And I sort of understand that, but I think it was the wrong move.”