Barrett Could Be Ginsburg’s Polar Opposite on Supreme Court

WASHINGTON (AP) — Amy Coney Barrett paid homage to Justice Ruth Bader Ginsburg in her White House speech Saturday as a shatterer of glass ceilings. She said she would be mindful of the woman whose place she would take on the Supreme Court.

She even commented that her children think their father is the better cook, much as Ginsburg used to talk about her husband’s prowess in the kitchen.

But the replacement of the liberal icon Ginsburg, the second woman to serve on the high court, by Barrett, who would be the fifth, would represent the most dramatic ideological change on the Supreme Court in nearly 30 years and cement conservative dominance of the court for years to come.

Barrett, a judge on the federal appeals court based in Chicago, made clear in her Rose Garden address that she looks to conservative Justice Antonin Scalia, for whom she once worked, and not Ginsburg, on matters of law.

“His judicial philosophy is mine, too. Judges must apply the law as written. Judges are not policy makers,” Barrett said. She was referring to their common method of interpreting laws and the Constitution based on what they were understood to mean when they were written.

Ginsburg, who died this month at age 87, and Scalia were dear friends, but they were on opposite sides of the most divisive issues of the day.

Barrett’s conservative judicial record, her writings and speeches suggest that she too would be Ginsburg’s polar opposite on a range of issues that include abortion and guns. 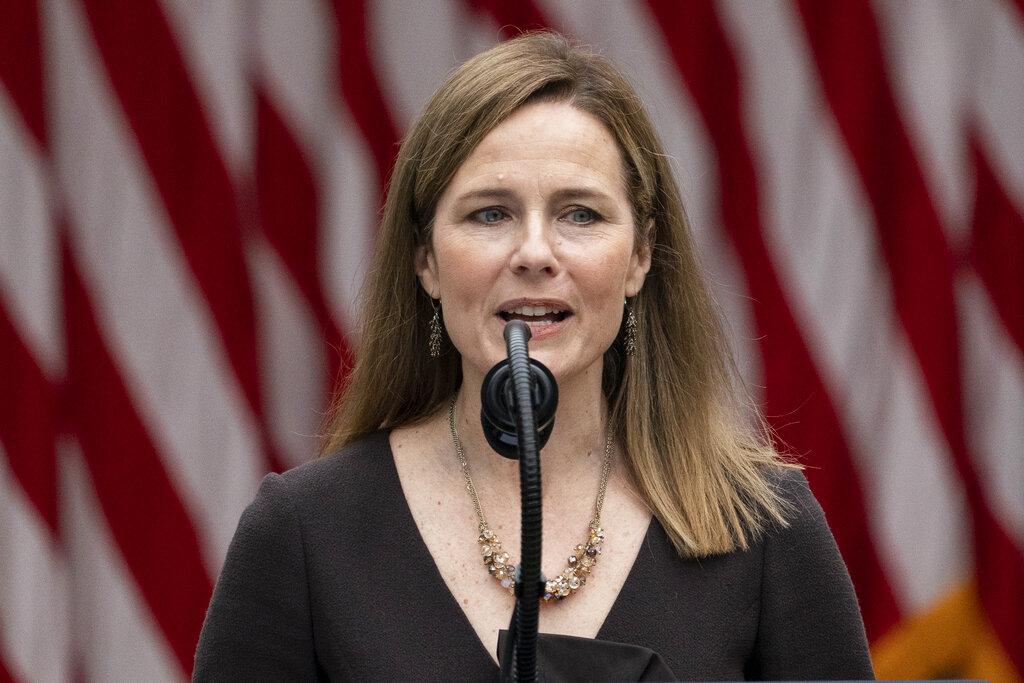 Judge Amy Coney Barrett speaks after President Donald Trump announced her as his nominee to the Supreme Court, in the Rose Garden at the White House, Saturday, Sept. 26, 2020, in Washington. (AP Photo / Alex Brandon)

Ginsburg believed deeply that the Constitution protects a woman’s right to an abortion. She was a firm opponent of a broad reading of the constitutional right to “keep and bear arms.”

The differences don’t stop there. Barrett has been critical of Chief Justice John Roberts’ opinion upholding the Affordable Care Act, which is again facing a constitutional challenge at the Supreme Court. Ginsburg was one of five votes that saved the law on two prior occasions.

If Barrett is confirmed before the Nov. 3 election, she would get a chance to weigh in on the latest lawsuit to overturn Obamacare, which is set for arguments a week later.

The contrast between Ginsburg and Barrett most resembles the differences between Justice Thurgood Marshall and the man who replaced him in 1991, Justice Clarence Thomas.

Marshall was part of the majority in the 1973 Roe v. Wade decision that declared a nationwide right to abortion. In his first year on the court, Thomas joined a dissenting opinion arguing that Roe should be overturned.

Marshall was a firm supporter of affirmative action programs in education and a fervent opponent of the death penalty. Thomas holds opposing views on both issues.

The backgrounds of Barrett and Ginsburg also are very different. Barrett is a Catholic from New Orleans. The Brooklyn-born Ginsburg was Jewish. Barrett had the chance to serve as a Supreme Court clerk. Ginsburg was able to secure a clerkship with a lower-court judge only after the intervention of a law school professor.

But they both taught at law schools and became appeals court judges in their mid- to late-40s. The both focused on procedural and technical legal issues in their scholarship.

The debate over Barrett’s confirmation already is raging, with one focus on gun rights.

Ginsburg was not part of the majority in the Supreme Court’s two major gun rights decisions in 2008 and 2010. But the court had been reluctant to take on big new cases involving gun restrictions.

Barrett’s ascension to the Supreme Court could give gun rights advocates the vote they need to bring the issue back to the court in the near future.

Both her supporters and detractors have pointed to her 2019 dissent in which she argued that federal and Wisconsin laws prohibiting someone convicted of a serious crime from owning a gun should not necessarily apply if the conviction was for a nonviolent crime.

The two judges in the majority agreed with Trump administration arguments that the defendant, Rickey Kanter, could not own a gun. Barrett wrote that “while both Wisconsin and the United States have an unquestionably strong interest in protecting the public from gun violence, they have failed to show, by either logic or data that disarming Kanter substantially advances that interest.”

She said that her colleagues were treating the Second Amendment as a “second-class right, subject to an entirely different body of rules than the other Bill of Rights guarantees.” Barrett quoted from a 2010 opinion by Justice Samuel Alito that extended gun rights, but the phrase also has been used more recently by Justice Clarence Thomas and other conservatives to complain that the Supreme Court has shied away from recognizing gun rights.

Conservative commentator Ed Whelan, also a onetime Scalia law clerk, praised the opinion for its “masterful application” of the originalist method of interpretation that Scalia favored to show that Kanter should not be barred from owning a gun.