On Chicago’s Northwest Side, LaBagh Woods a Haven for Birds, Volunteers Alike

In normal times, there are 1,500 volunteer workdays each year throughout the Forest Preserves of Cook County.

Like routines everywhere, those workdays were put on hold in March because of the coronavirus pandemic.

But just before Gov. J.B. Pritzker’s stay-at-home order was issued, I joined Jeff Skrentny and several dozen volunteers for a morning of restoration work at LaBagh Woods, a small Northwest Side forest preserve.

Skrentny knows LaBagh Woods better than just about anyone. For the last 15 years he’s come here several times each week. He also organizes the volunteer efforts at LaBagh, in conjunction with the Forest Preserves of Cook County’s Stewardship Program.

With lingering snow on the ground, Skrentny and his crew cut down unwanted trees, remove invasive buckthorn shrubs and spread seed for native plants.

“If you look in here now,” says Skrentny, gesturing to a dense section of forest where specially trained volunteer sawyers are cutting down trees, “you just see lots of trees, too many trees.

What we want to do is try to create a space here that mimics what this used to be, which was more of an oak savannah, a wet prairie oak savannah,” he explains.

Other volunteers cut back buckthorn and carry it to a large bonfire, maintained by specially trained brush pile burners.

While LaBagh is small — 80 acres of natural areas and 80 acres of picnic groves — it is a popular spot for migrating birds and, not surprisingly, birders.

“That’s how I personally got started doing this,” Skrentny says. “It was all about birds. I would come out to LaBagh woods to look for birds.”

More than 200 species of birds have been identified at LaBagh, making it one of the area’s best places to see migrating birds away from the lakefront.

One reason for the restoration work, says Skrentny, is to make it even more bird-friendly.

“We know that a good bird habitat has treetops, it has sub-canopy trees, it has shrubs and then it will have an herbaceous layer. We want all of those things to make a really good high quality bird habitat,” he said.

“This is our five-star hotel for birds,” says longtime volunteer Dennis Marton, a retired United Airlines employee who started coming here when he was 10 years old. “I grew up in LaBagh. This was my playground.” He comes to most work days with his wife, Linda. “We are trying to bring it back and make it what it was.”

And it’s not only birds. Skrentny and other LaBagh lovers have identified an astonishing variety of living things here. “We know there are more than 1,000 things that call this home. One thousand native plants, animals, slime molds, fungus, butterflies, dragonflies, herbaceous plants, trees,” Skrentny says.

To be notified when volunteer work days start up again you can sign up here or email: [email protected].

— My Years Birding at LaBagh

— Friends of the Forest Preserves

— Friends of the Chicago River 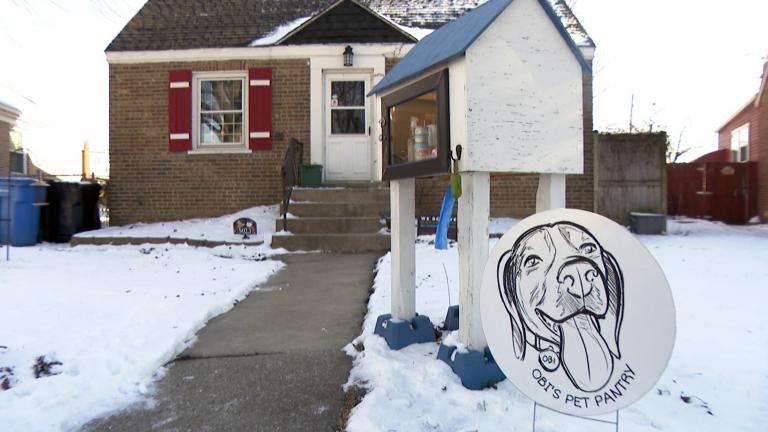