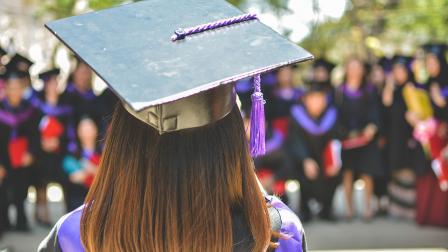 (Photo by MD Duran on Unsplash)

Oprah. Cubs. White Sox. Blackhawks. “Hamilton.” These are a few of the teams and celebrities who will help send off the class of 2020 during Chicago’s citywide virtual graduation this weekend.

Mayor Lori Lightfoot’s office on Thursday released the full lineup for the first-of-its-kind ceremony on Sunday titled "Graduation 2020: For Chicago. By Chicago.”

“This is an incredible opportunity to give the graduates of 2020 the celebration they deserve” Lightfoot said in a statement. “Completing high school is a momentous occasion and while this year’s graduation ceremony might not be what they expected, this is an opportunity to send our students off in style.”

The city previously said the event would be emceed by “Hamilton” star Miguel Cervantes and feature a commencement speech by Oprah Winfrey.

High school seniors—we're celebrating your graduation this weekend with Oprah, Miguel Cervantes, and more this Sunday at 1 PM. Sign up for a reminder at https://t.co/GAMjEyQniA pic.twitter.com/6XMed7vAoU

The ceremony will also feature performances from Chicago native and “The Voice” finalist Katie Kadan, who will join students to perform the national anthem, and hip-hop artist Common, another Chicago native, who will deliver an opening dedication to the 2020 graduates.

The virtual ceremony was made necessary by COVID-19, which shut down school buildings for in-person learning and events this spring.

The event is scheduled to run from 1-2 p.m. Sunday. It will be livestreamed on the mayor’s social media channels and aired on local television networks in Chicago including WTTW. More information is available at chicagograd2020.com.