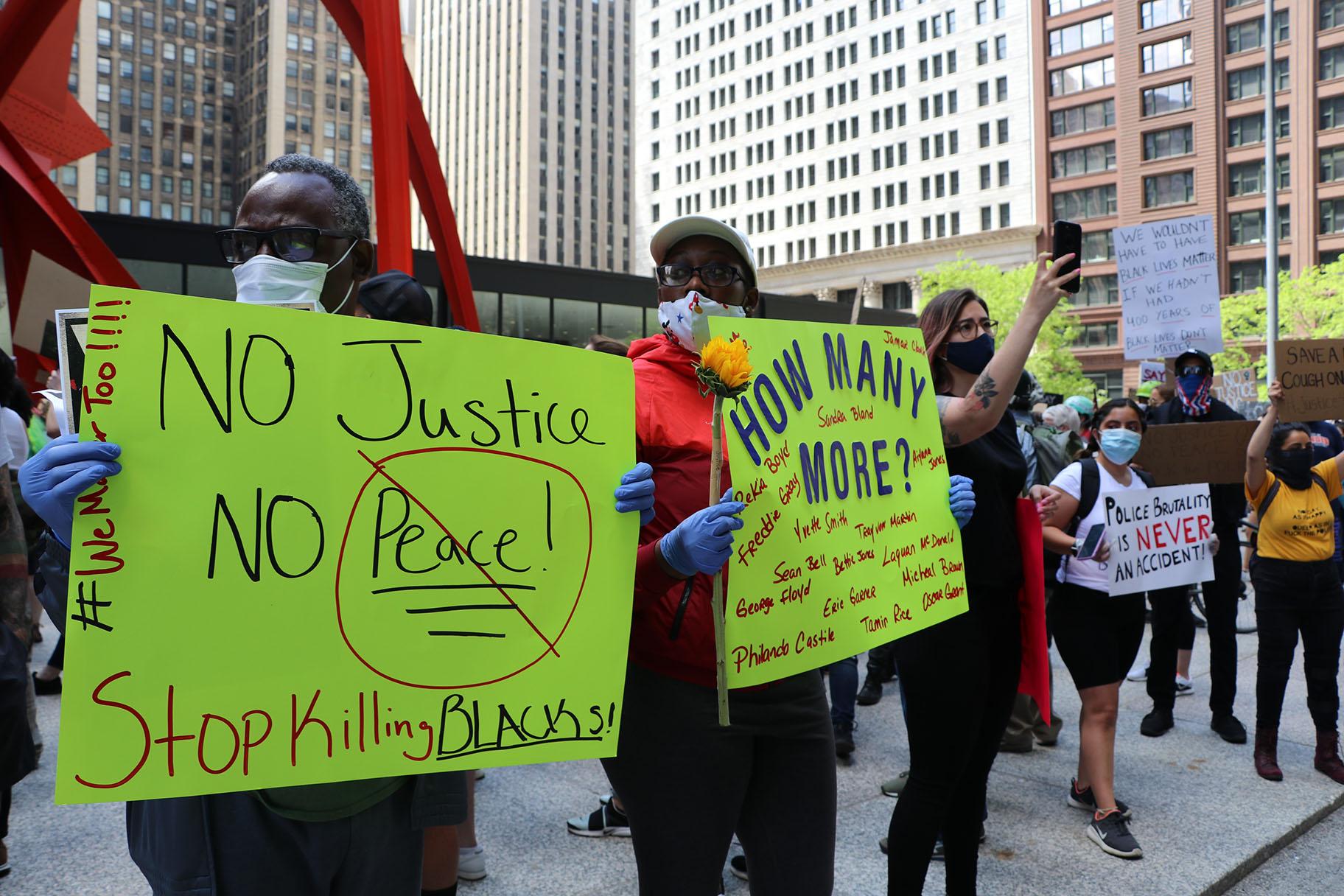 James Norwood, 53, of the suburb of South Holland, came to the Saturday, May 30, 2020 protest with his daughter Hannah. “As far as destroying property, I don’t agree with it but I can understand the frustration of people,” Norwood said. “We’ve been sitting at the table for so long and they keep saying that things are going to change and nothing is changing, so at some point, you have to hit them where it hurts – hit their pockets.” (Evan Garcia / WTTW News)

Following days of violence and looting throughout the city and Cook County, a group of faith leaders, community activists and politicians gathered to urge peaceful protests while calling for reform.

“The murder of George Floyd at the hands of Minneapolis police was a spark that ignited protests there in Minneapolis and across the nation,” Cook County Board President Toni Preckwinkle said Tuesday. “This murder, this casual routine murder at the hands of police has caused an uproar because it’s routine. … George Floyd’s murder – this racist preventable death is nothing new and the violence after, tragically nothing new.”

Across the city and county, windows were smashed and stores were looted just as many of them began reopening or were on the verge of reopening after being shut down for two months to slow the spread of the coronavirus.

Activist Jahmal Cole, CEO and founder of My Block, My Hood, My City, said a mother raising four children is out of a job because the gas station where she worked was burned down.

“There’s a way we can resist constructively. Busting up businesses in your own communities … that’s not intelligent,” Cole said, adding there’s a difference between violence and force. “Protesting peacefully is forceful. You can put pressure on institutions to address issues you care about. … Violence — that’s when you violate somebody’s property. That’s not intelligent.”

“We’ve been standing in front of businesses that have been looted and now we protest peacefully,” he said. “When young people approach, we know how to talk to them because we work with them already. We need community leaders to post up on a block in their neighborhood, and when young people come, let them know there are peaceful ways to protest.”

Cardinal Blase Cupich said protesters should “heed the wishes of Floyd’s family and not dishonor (his) gentle memory by spreading the sickness of violence. We need peaceful action.”

Cupich also called for reforms to “the laws that underpin the organized oppression” and for legislation to be passed that “guarantees equal opportunities.”

Gov. J.B. Pritzker ruled out calling a special session to enact such legislation, but agreed that reforms are needed. He also acknowledged people need “room to process (their) grief and to heal.”

“I do not pretend to know the pain that’s experienced by black America, the pain of knowing what happened to George Floyd could happen to you or to your child,” Pritzker said. “But I do know, at this moment, so many people are overwhelmed here in the state of Illinois with rage, with passion and with sorrow.”

The path ahead won’t be easy, Pritzker said.

“Real change, structural change comes from protest paired with policy,” he said. “That means police reform with genuine investigations, transparency and accountability. That means taking the justice in criminal justice and making it mean something.

“That means sustained investment in communities throughout our state. … It will take activism plus action to build ourselves into the state, into the nation we strive to become,” he added.