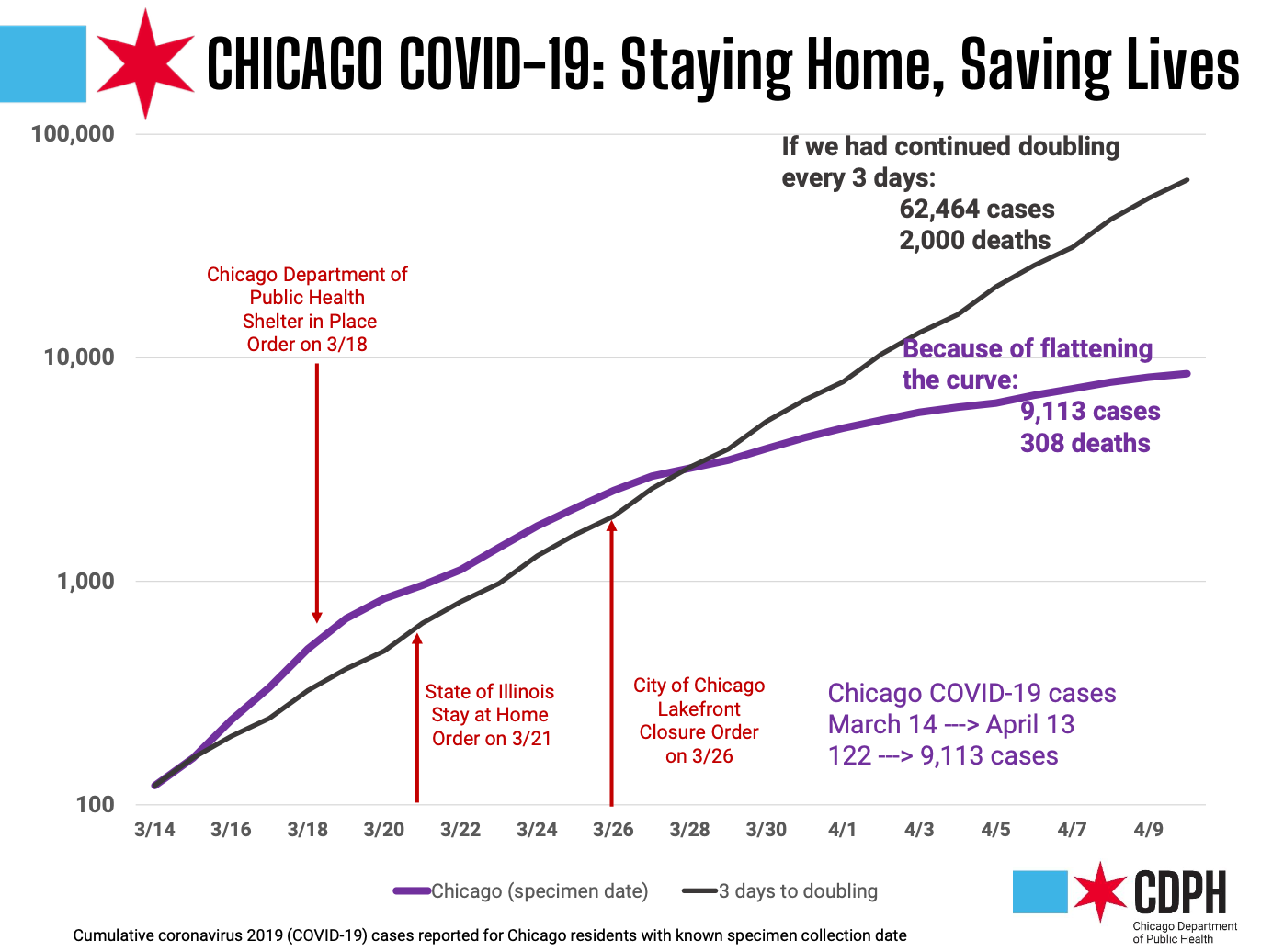 By the time Gov. J.B. Pritzker ordered Chicagoans to stay home in an effort to stop the spread of the new coronavirus starting March 21, the number of confirmed cases was more than doubling every three days in Chicago, setting the city on a catastrophic course.

Had that pace of infections remained steady, 2,000 Chicagoans would have died and approximately 64,500 people would have been sickened by COVID-19, the illness caused by the virus, according to new data released by Mayor Lori Lightfoot.

Instead, the governor’s order and the mayor’s campaign to get Chicagoans to stay home through a series of humorous memes and videos mixed with stern warnings has saved at least 1,700 lives, according to newly released city data.

“We are definitely seeing progress,” Lightfoot told reporters Tuesday, ahead of the data’s public release. “No question.”

Officials have documented more than 9,100 cases of the coronavirus in Chicago, and 308 people have died from the illness as of Tuesday afternoon.

The number of cases of the virus is now doubling every 12 days, according to the data.

When the Chicago Department of Public Health issued a shelter-in-place order on March 18 — the day after the state's primary election — confirmed cases of the coronavirus were doubling every two days, according to the data.

Had that pace of infections continued unabated, Chicago would likely now have approximately 1.5 million cases of COVID-19 and 48,000 people would have died — the equivalent of concentrating 2 1/2 years’ worth of deaths in Chicago into a matter of weeks, Arwady said.

By April 2 — six days after Lightfoot ordered the lakefront, Riverwalk and The 606 trail closed — the curve of infections had begun to flatten with the rate of new confirmed cases doubling every eight days, according to the data released by the city.

Lightfoot said the data proves that she was “110% justified” in closing the trails and all of the parks east of Lake Shore Drive.

“The data validates what we did,” Lightfoot said. “We now have the hard data to prove that the decisions, popular or not, were the right steps to take.”

Lightfoot said cellphone data also shows a significant increase in the number of people staying close to home, based on the number of times devices checked in to the same location between midnight and 9 a.m., Arwady said.

Greater numbers of North Side and downtown residents are staying at home as compared with South Side and West Side residents, with isolated pockets showing no decline in movements at all, according to the data. 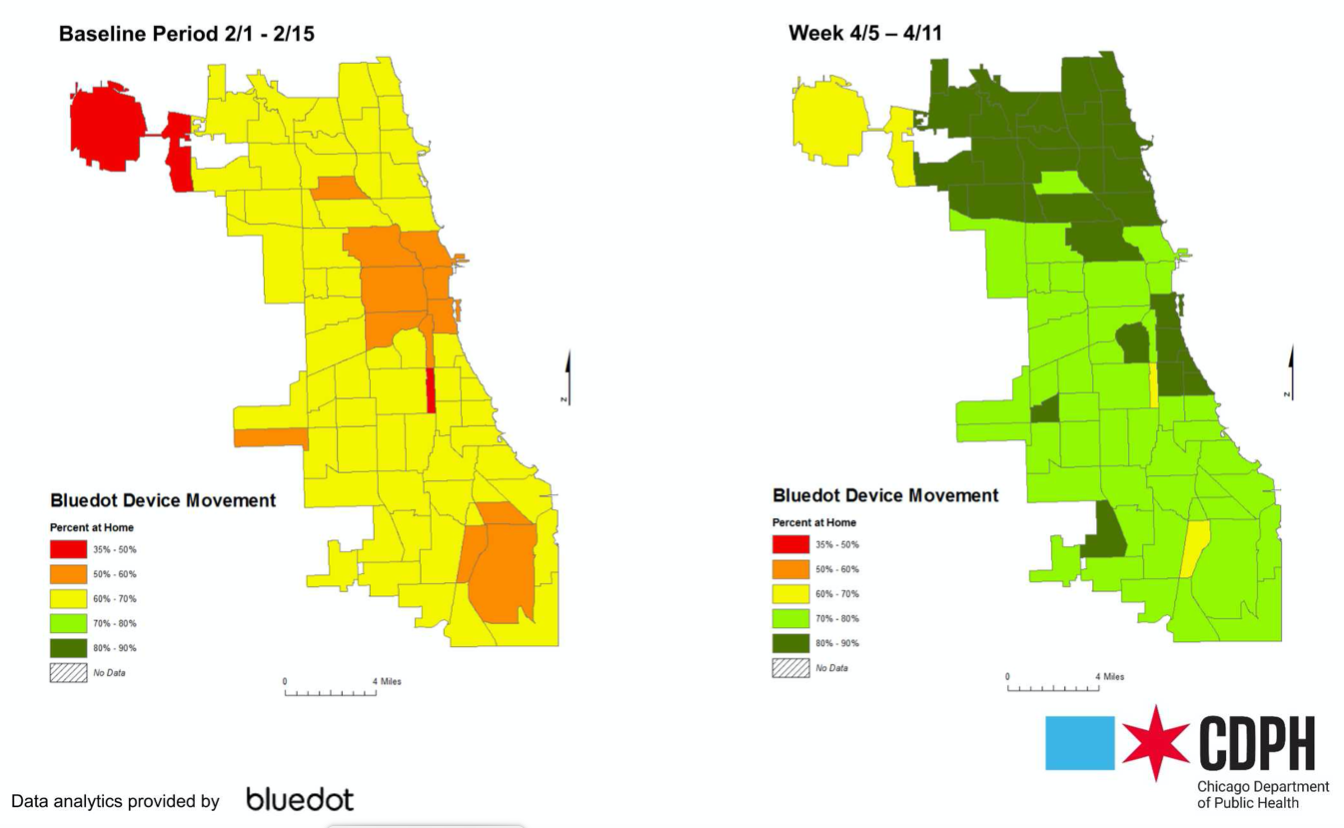 The data used by the city’s health department is based on information provided by Bluedot, a software company that provides data to health officials about infectious disease outbreaks. With users’ permission, Bluedot tracks location data, stripping away identifying characteristics of that data before sharing it with the city, Arwady said.

The new data could help Lightfoot convince Chicagoans to remain patient even as the weather warms, the end of the school year looms and the economic toll of the virus grows.

Pritzker has yet to announce whether he will extend the stay-at-home order beyond April 30.

Crucially, slowing the spread of the virus has allowed Chicago’s hospitals to keep pace with the number of new infections, Arwady said.

Approximately 78% of the city’s intensive care units have been occupied since the start of the pandemic in March, according to city data. Hospitals have been able to maintain that occupancy rate by adding a significant number of new intensive-care beds to keep pace with demand, Arwady said.

But there is no doubt hospitals have had to adjust to cope with the influx of patients infected with the coronavirus, Arwady said. On March 19, 7% of intensive-care beds were occupied by those with confirmed cases of the virus, as compared with approximately 41% on April 12, she added.

In addition, approximately 40% to 50% of the city’s ventilators have been in use since the start of the crisis — a steady rate even as the number of ventilators used by those suffering from the coronavirus rose from 1% of the total amount to 25%, Arwady said. 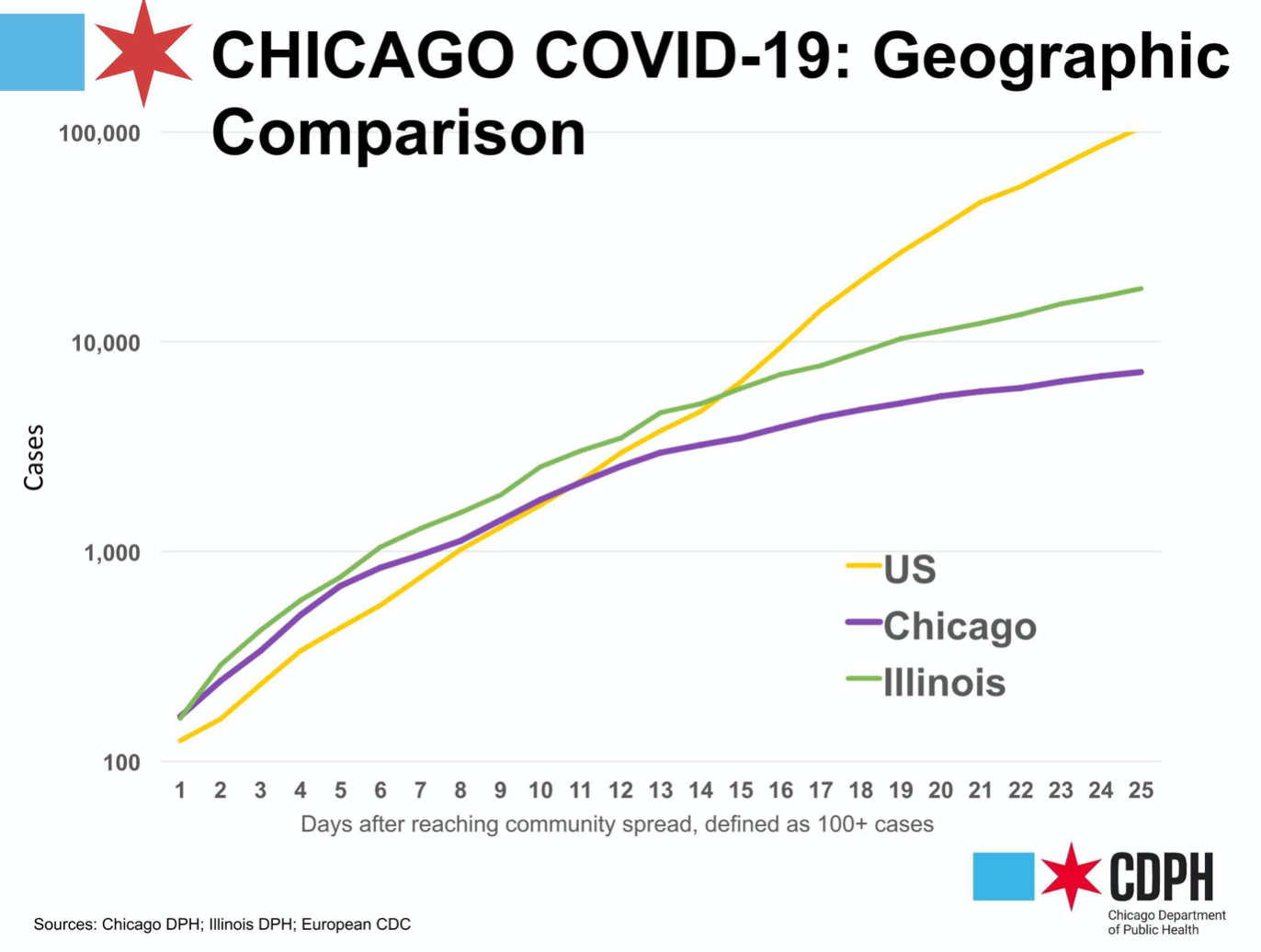 City officials do not expect cases to peak and then drop significantly, Lightfoot said. Instead, it’s likely the city will see a “rounded, elongated” period of cases rising more slowly before they begin to drop, she said.

That means it’s not clear when the stay-at-home order could be lifted, allowing businesses to reopen and schools to welcome back students, Lightfoot said.

“We are not where we need to get,” Lightfoot said, adding that the city needs to be able to offer residents “reliable, widespread” testing before she would have “confidence” to reopen the city.

“We are turning over every rock to expand testing,” Lightfoot said.

Lightfoot said she was especially concerned that lifting restrictions would allow infections to bounce back, as has occurred in Singapore and Japan.

“There is no single magic number” that will determine when the city can reopen,” Arwady said.

However, city officials are watching several sets of data to determine whether the city is ready to lift the stay-at-home order, Arwady said.