Illinois restaurants and bars are preparing for their last call for dine-in business until at least the end of the month (limited carryout and delivery service will still be allowed). Gov. J.B. Pritzker ordered the shutdown Sunday to stem the spread of the new coronavirus. Meanwhile, Illinois grocers big and small are scrambling to restock shelves after an onslaught of weekend shoppers left them bare.

Shoppers lined up hundreds of feet deep outside Costco in Lincoln Park before doors opened Monday. They were hopeful they could stock up on whatever the store had left.

“I just want to stock up because I think they’re gonna impose curfews,” said Linda Fitzpatrick. “I have a 90-year-old mother in Northbrook that I have to watch out for, and I want to make sure I have enough stuff for her for the next couple weeks.”

“I’ve seen a bunch of empty shelves at other grocery stores,” said Devon Gandhi, who said he was shopping for a 1-year-old at home. “Hopefully they have food in there.”

Costco and other stores are frantically trying to keep up with demand, after rows and rows of empty shelves greeted customers all over the city last week.

In Cicero, workers at the family owned La Chiquita store had been busy restocking shelves since 4 a.m. Store manager Martin Sandoval (no relation to the indicted state senator) says he’s calling in favors to suppliers to get even fractions of full supply orders.

“One vendor was able to give me 85%, another vendor, they’re thinking maybe 15% to 20% of what they have, and that’s mostly dry goods,” Sandoval said. 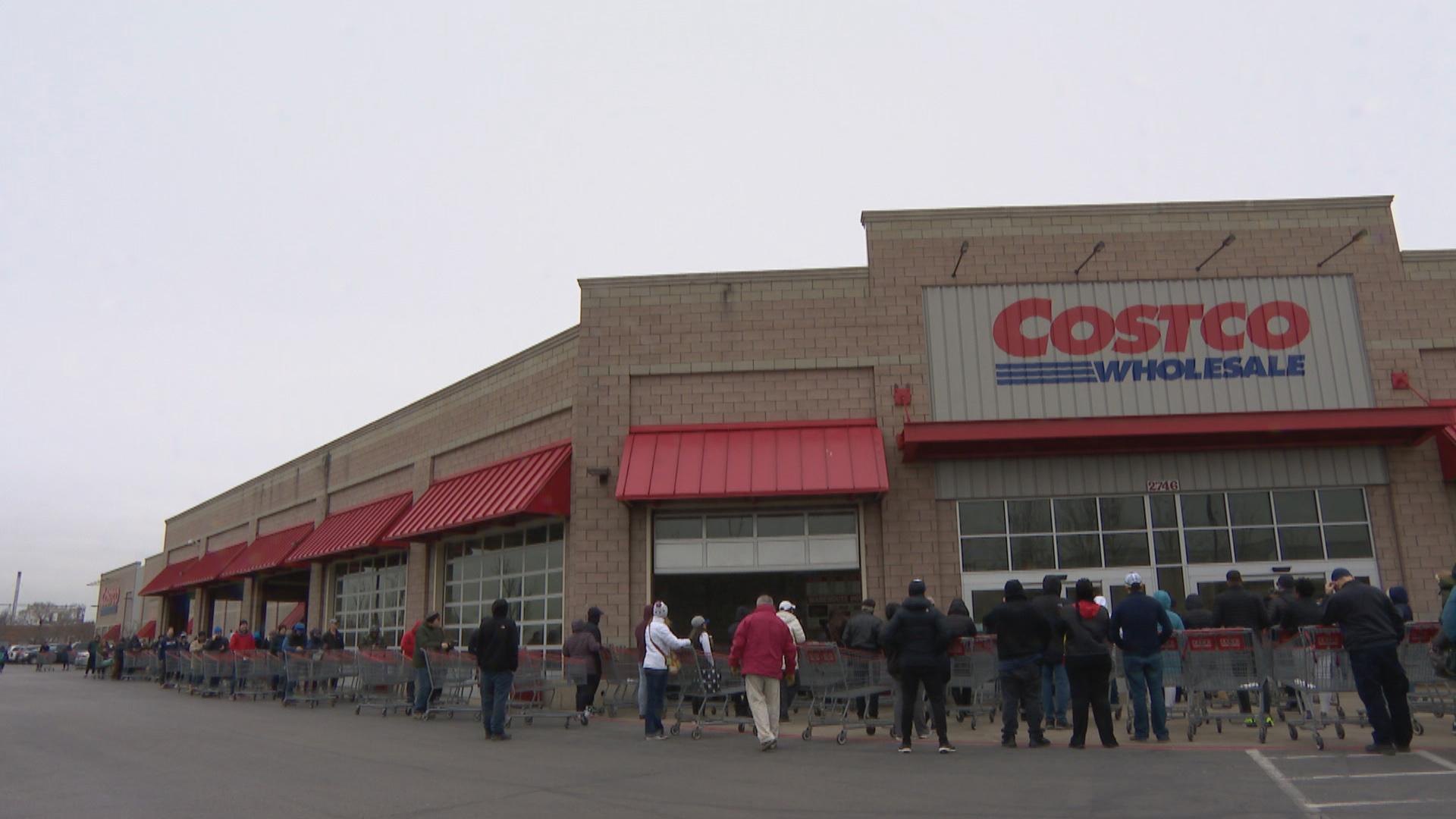 Shoppers line up outside Costco in Lincoln Park on Monday, March 16, 2020. (WTTW News)

But there's a lot of uncertainty in the industry, he added. “They don’t know if their supply chain is going to hold up for the demand,” he said.

La Chiquita shopper Joann Hinton said she had to call around before venturing to buy food for herself and several family members.

“I called Fresh Thyme in River Forest, they had nothing. Went to Trader Joe’s, the walls were bare. I called this store this morning and they said they had eggs and some other items,” Hinton said.

Pritzker says he’s considering loosening restrictions on the food supply chain if need be, but urges shoppers to only buy what they need, and not to hoard.

“I know the grocery stores faced a major surge of shoppers in the last few days and pictures of barren shelves are quick to circulate on social media,” Pritzker said in a tweet, seeking to reassure shoppers.

“Illinois’ food supply chain is among the nation’s strongest & steadiest. I’m committed to keeping it that way as things evolve.”

I know the grocery stores faced a major surge of shoppers in the last few days & pictures of barren shelves are quick to circulate on social media.

Illinois’ food supply chain is among the nation’s strongest & steadiest.

I’m committed to keeping it that way as things evolve.

Meanwhile, those in the restaurant and bar industry say they are scrambling to prepare for the new shutdown orders.

Bill Jacobs, owner of Piece pizzeria and brewery in Wicker Park says he expects to lose 70% of his business during the shutdown, but will ramp up delivery and pick-up services.

“We don’t know how long this is going to go on for,” Jacobs said. “We’re keeping our fingers crossed that this will be out of the system in a short time, but we really don’t know, and that’s the scary part.”

He had a message for servers and bartenders, who will have to be furloughed with the hopes that they can return to work in two weeks: “Hang in there. We’re going to do everything we possibly can for you.”

Per the new restrictions, restaurant customers in Chicago will be able to walk in and carryout their orders.

Sam Toia, head of the Illinois Restaurant Association, says the situation is devastating for the industry. He is calling on federal help to prevent mass layoffs and small restaurants going out of business.

Without it, he says, the economic impact of the coronavirus will long outlast the shutdown.