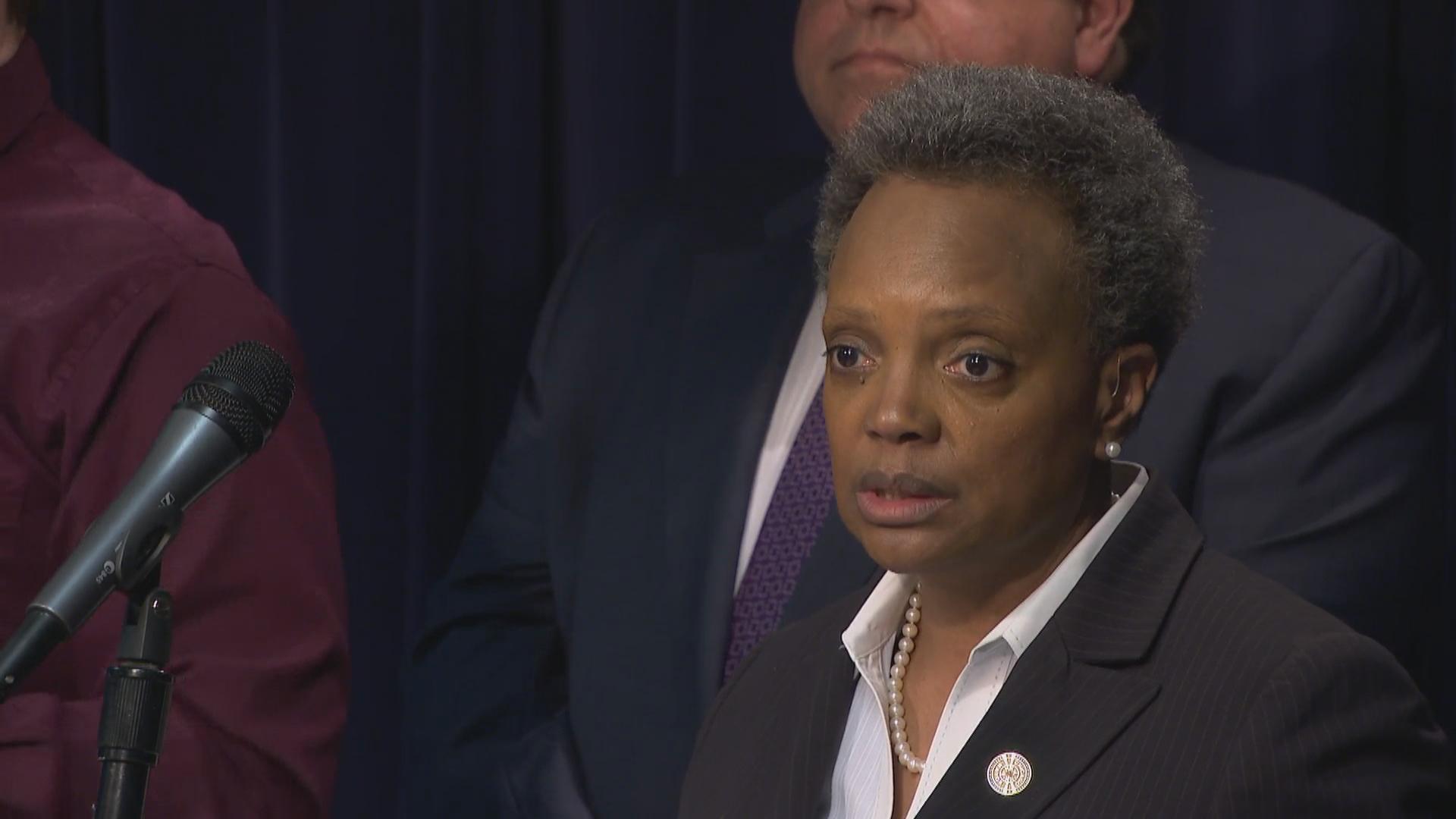 Healthy students should still go to school, but for the next 30 days there should be no more parades, professional sports game, rock concerts and no banquets anywhere in Illinois as officials seek to prevent further spread of the novel coronavirus.

“This is not a time to take chances,” Lightfoot said. “If you do not feel well, for God’s sake, stay home. All individuals, regardless of socio-economic or immigration status, should seek treatment without fear.”

Officials also recommend the cancelation or postponement of events with crowds of 250.

“I wish I could tell you that going about your everyday lives with no adjustments was the best course of action right now. It is not,” Pritzker said. “We need to reduce social contact in order to try and control the spread of the virus.”

The guidance means that religious organizations will have to limit the number of worshipers who meet; Pritzker suggested that could mean adding additional services.

“It’s not a time for panic, it’s a time for planning and a time for taking the guidance seriously” in hopes of changing the arc of the outbreak, Chicago Department of Public Health Commissioner Dr. Allison Arwady said.

With cases numbering in the dozens, “now is the time for people to be taking these recommendations seriously” before that number balloons, she said.

Ezike said the state is investigating the patients’ travel history and potential contacts with other known cases.

“The important thing is that we want to focus on curing and caring for the cases, and diligently working to identify other cases. We want to quickly notify people who would have come in contact with these cases, so we can begin monitoring them for symptoms,” Ezike said. “Reports of suspected cases are inevitable, especially when we see more spread.”

Ezike said the known cases of coronavirus have not led to any deaths in Illinois.

Of the identified cases, she said approximately a third are associated with travel, half are related to having contact with someone else who has COVID-19, “and the remaining cases are not as clear and could be the result of community spread,” Ezike said.

“So while you may not have a case in your community now, we anticipate that there will be,” she said. “We need to look not only where the virus is now, but work preemptively to try to mitigate additional cases that will be coming.”

Officials would not share additional details about the child who tested positive, due to privacy concerns, but said that officials have been in contact with the child’s school.

Arwady stressed that 80% of cases of those infected with the virus have proven to be mild with about 20% requiring hospitalization and 5% needing intensive care; children have proven to be less effected by the coronavirus than have the elderly; she’s more concerned with instituting precautions at nursing homes than at schools.

“Some of the guidance that we’re providing – limiting these mass gatherings, really thinking about the social distancing and other ways to keep individuals safe, that especially applies to older individuals and people with underlying medial conditions,” Arwady said. “That’s just because we’re more worried that if they were likely to get coronavirus, they could have a more serious course.”

But nobody’s work is too important that they need to go to the office or take a trip if they’re unwell, Arwady said.

“If you’re having symptoms we need you to stay home,” she said.

Pritzker’s executive orders, which his office said will soon be filed, will apply to the whole state, even in communities where there is no known case of the coronavirus.

“Don’t be fooled into thinking that your community is immune. It is not,” the governor said.

For the next month, the downtown James R. Thompson Center will be closed off from “people who do not have business with the state,” Pritzker said.  The Chicago Transit Authority “L” station that stops at the Thompson Center will remain open, and people can still come to the building for government services like applying for a drivers’ license.

“We will not let you down in these challenging times,” Pritzker said.

Even so, Pritzker and Lightfoot said they will soon unveil new guidelines for public workers that will allow employees to work from home, and they encouraged private companies to do the same.

“I am asking that every private business that is able, to have employees work remotely,” the governor said.

Other CTA operations will also continue as usual, albeit with additional cleaning of train cars.

“We don’t see any reason or rational to shut down” public transit in Chicago, Lightfoot said. “We feel very comfortable with the plan right now.”

As we work to do everything we can to help reduce the spread of germs, you can help too! If you feel sick, stay at home. Cover your cough or sneeze into a tissue. Wash your hands regularly for at least 20 seconds. For more, visit https://t.co/5w4ddBRVkm pic.twitter.com/wtsdOhr08x

While Pritzker said Illinois has received thousands of additional kits to test individuals for COVID-19, “we do not have enough tests.”

“We have to make sure that we’re focusing the number of tests we have on the people we know are exhibiting symptoms” but whose tests for the flu and other common respiratory illnesses have come back negative.

The Cook County Board will still hold a previously scheduled special meeting Monday, but otherwise, an executive orders issued Thursday by board President Toni Preckwinkle calls for any meetings by county boards and commissions in March and April to be canceled “to the extent possible.” Meetings that need to occur should be “limited to matters that require immediate action.”

“We must balance continuing the functions of government while also ensuring, to the best of our abilities, all county residents are safe and remain safe and secure,” Preckwinkle said.

Despite all of the restrictions, the March 17 primary contest will still take place.

“The election will proceed forward on Tuesday,” Pritzker said.

But he encouraged voters to cast their ballots early, in order to avoid election-day crowds, or – better yet – to vote by mail.

Chicago’s elections board on Thursday announced it was extending the deadline to apply for a mail-in ballot by an extra six hours, until 11:59 p.m. Thursday, and that early voting hours would be extended so that voters can go to polling places on Friday from 9 a.m. until 7 p.m., on Saturday from 9 a.m. to 6 p.m. and Sunday from 10 a.m. until 5 p.m.

But the powerful Chicago Teachers Union is demanding Chicago Public Schools close the 540 schools it believes will be used as polling places, and to then deep-clean those schools overnight before opening back to students next Wednesday.

A letter from the CTU to Lightfoot and to CPS CEO Janice Jackson also says “in the increasingly likely event that CPS will need to close additional schools in response to the pandemic, the Union hereby demands that no educators, support staff, part-time workers (including parent workers) or other contract workers who serve our schools suffer any loss of pay or benefits.”

At the press conference earlier Thursday – which officials had requested television channels carry live – Lightfoot had said she will use data to make decisions about the actions she would take to further limit spread.

“We would never put our children in danger,” Lightfoot said about the decision to keep Chicago Public Schools open. “I say that as mayor, but also as a mother.”

Meanwhile, the Chicago Fraternal Order of Police called for the city to take extra measures to protect officers’ safety.

Anyone who does venture out, whether to school, to vote or otherwise, needs to avoid palm-to-palm greetings.

“Do not shake hands – as a very practical thing, stop doing that,” Arwady said. “The way this virus is transmitted is not in the air … this is not spread like measles. This is spread primarily through droplets” when someone coughs or sneezes, and germs from their hands get on someone else.

Earlier this week, officials postponed all three of Chicago’s St. Patrick’s Day parades scheduled for this weekend due to concerns over COVID-19, and Pritzker issued a disaster proclamation to free up state and federal emergency assistance funds to help with the state’s response to the virus.

Coronaviruses are respiratory viruses that range from the common cold to more serious illnesses, like SARS and MERS. There is no treatment or vaccine for the virus.