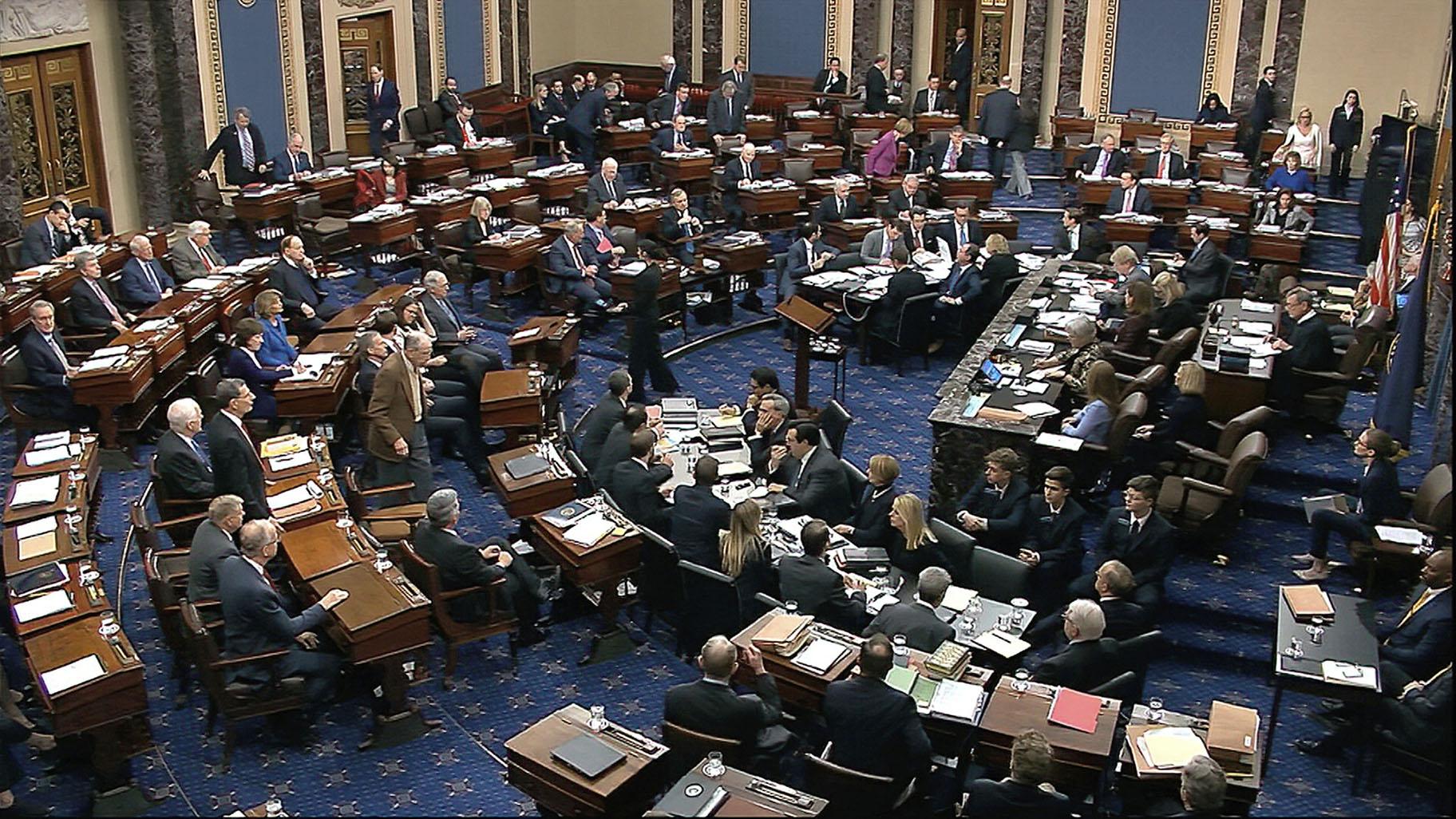 In this image from video, Senators cast their vote on the motion to allow additional witnesses and evidence to be allowed in the impeachment trial against President Donald Trump in the Senate at the U.S. Capitol in Washington, Friday, Jan. 31, 2020. The motion failed with a vote of 51-49. (Senate Television via AP)

WASHINGTON (AP) — The Senate rejected the idea of summoning witnesses for President Donald Trump’s impeachment trial late Friday, all but ensuring his acquittal. But senators considered pushing off final voting on his fate to next week.

The vote on allowing new witnesses was defeated 51-49 on a near party-line vote.

Republicans Susan Collins of Maine and Mitt Romney of Utah voted along with the Democrats for witnesses, but that was not enough.

Despite the Democrats singular focus on hearing new testimony, the Republican majority brushed past those demands to make this the first Senate impeachment trial without witnesses. Even new revelations Friday from former national security adviser John Bolton did not sway GOP senators, who said they’d heard enough.

That means the eventual outcome for Trump would be an acquittal “in name only,” said Rep. Val Demings, D-Fla., a House prosecutor, during final debate. Some called it a cover-up.

The impeachment of the president now lands squarely in an election year before a divided nation. Caucus voting begins Monday in Iowa, and Trump gives his State of the Union address the next night.

Trump was impeached by the House last month on charges the he abused power and obstructed Congress like no other president has done as he tried to pressure Ukraine to investigate Democratic rival Joe Biden, and then blocked the congressional probe of his actions.

The Democrats had badly wanted testimony from John Bolton, Trump’s former national security adviser whose forthcoming book links Trump directly to the charges. But Bolton won’t be summoned, and none of this appeared to affect the trial’s expected outcome.

In an unpublished manuscript, Bolton writes that the president asked him during an Oval Office meeting in early May to bolster his effort to get Ukraine to investigate Democrats, according to a person who read the passage and told The Associated Press. The person, who was not authorized to disclose contents of the book, spoke only on condition of anonymity.

In the meeting, Bolton said the president asked him to call new Ukrainian President Volodymyr Zelenskiy and persuade him to meet with Trump’s personal lawyer, Rudy Giuliani, who was planning to go to Ukraine to coax the Ukrainians to investigate the president’s political rivals. Bolton writes that he never made the call to Zelenskiy after the meeting, which included acting chief of staff Mick Mulvaney and White House Counsel Pat Cipollone.

The revelation adds more detail to allegations of when and how Trump first sought to influence Ukraine to aid investigations of his rivals that are central to the abuse of power charge in the first article of impeachment.

The story was first reported Friday by The New York Times.

“I never instructed John Bolton to set up a meeting for Rudy Giuliani, one of the greatest corruption fighters in America and by far the greatest mayor in the history of NYC, to meet with President Zelenskiy,” Trump said. “That meeting never happened.”

Key Republican senators said even if Trump committed the offenses as charged by the House, they are not impeachable and the partisan proceedings must end.

“I didn’t need any more evidence because I thought it was proved that the president did what he was charged with doing,” retiring GOP Sen. Lamar Alexander of Tennessee, a key hold out, told reporters Friday at the Capitol. “But that didn’t rise to the level of an impeachable offense.”

Republican Sen. Lisa Murkowski of Alaska said she, too, would oppose more testimony in the charged partisan atmosphere, having “come to the conclusion that there will be no fair trial in the Senate.’’ She said, “The Congress has failed.”

Eager for a conclusion, Trump’s allies nevertheless suggesting the shift in timing to extend the proceedings into next week and it shows the significance of the moment for senators in casting votes in only the third presidential impeachment trial in American history.

The situation remained fluid, but senators have indicated they want more time to publicly debate the charges and air their positions on the coming vote, according to a Republican familiar with the proposal but unauthorized to discuss it. The person was granted anonymity.

Senate Majority Leader Mitch McConnell made the offer to Democratic Leader Chuck Schumer, the person said. Senators were considering it while the proceedings were underway on the Senate floor. Schumer had not yet agreed to it.

Under the proposal, the Senate would resume Monday for final arguments, with time Monday and Tuesday for senators to speak. The final voting would be Wednesday.

To bring the trial toward a conclusion, Trump’s attorneys argued the House had already heard from 17 witnesses and presented its 28,578-page report to the Senate. They warned against prolonging it even further after House impeached Trump largely along party lines after less than thee months of formal proceedings making it the quickest, most partisan presidential impeachment in U.S. history.

Some senators pointed to the importance of the moment.

“What do you want your place in history to be?” asked one of the House managers, Rep. Jason Crow, D-Colo., a former Army Ranger.

Trump is almost assured of eventual acquittal with the Senate nowhere near the 67 votes needed for conviction and removal.

To hear more witnesses, it would have taken four Republicans to break with the 53-seat majority and join with all Democrats in demanding more testimony. But that effort fell short.

Chief Justice John Roberts, in the rare role presiding over the impeachment trial, could break a tie, but that seems unlikely.

Murkowski noted in announcing her decision that she did not want to drag the chief justice into the partisan fray.

Protesters stood outside the Capitol as senators arrived on Friday, bu few visitors have been watching from the Senate galleries.

Bolton’s forthcoming book contends he personally heard Trump say he wanted military aid withheld from Ukraine until it agreed to investigate the Bidens. Trump denies saying such a thing.

The White House has blocked its officials from testifying in the proceedings and objected that there are “significant amounts of classified information” in Bolton’s manuscript. Bolton resigned last September — Trump says he was fired — and he and his attorney have insisted the book does not contain any classified information.