Trump’s Defense Shifts to Not ‘Impeachable’ Even if True 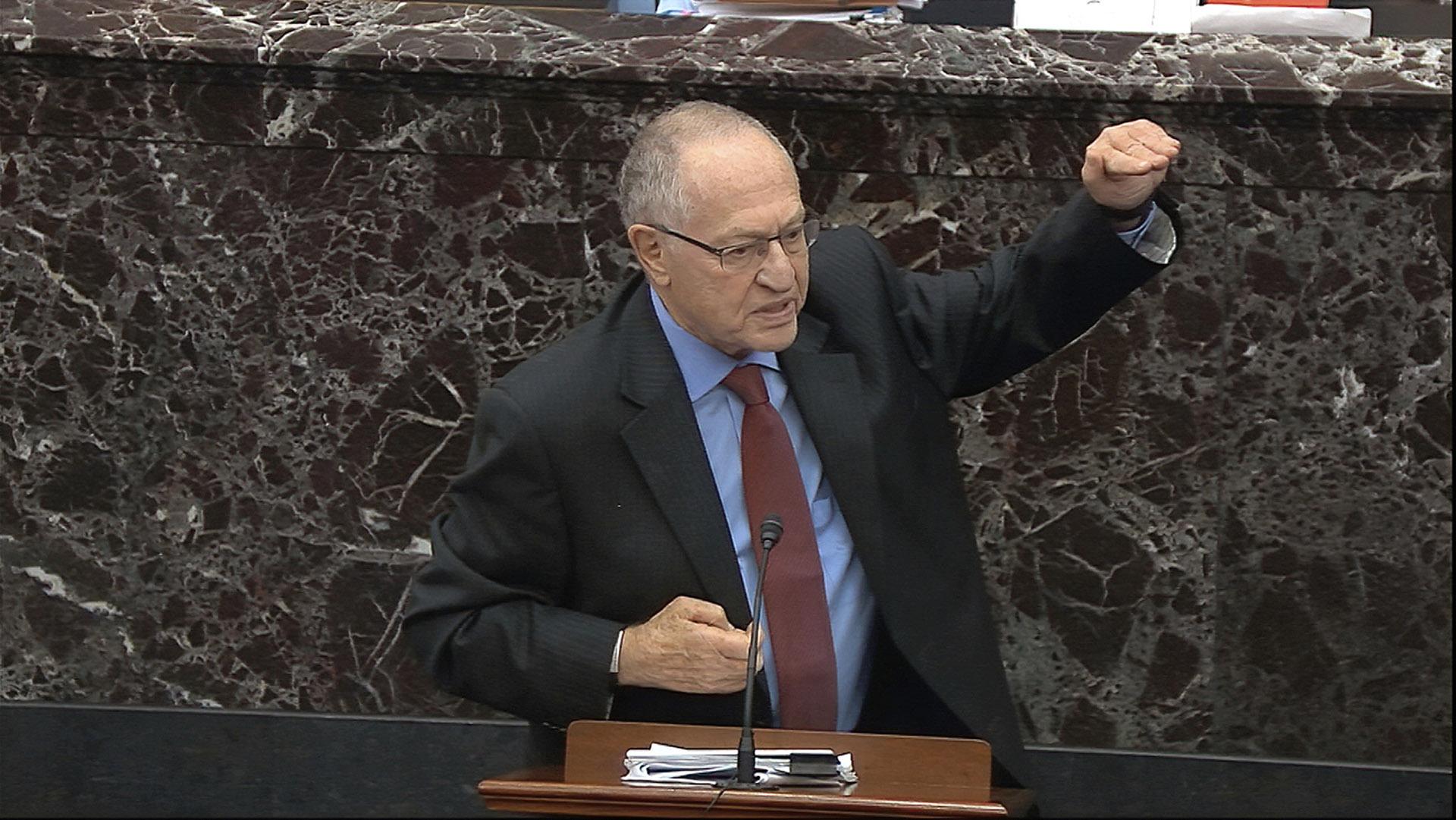 In this image from video, Alan Dershowitz, an attorney for President Donald Trump, answers a question during the impeachment trial against Trump in the Senate at the U.S. Capitol in Washington, Wednesday, Jan. 29, 2020. (Senate Television via AP)

WASHINGTON (AP) — In a striking shift from President Donald Trump’s claim of “perfect” dealings with Ukraine, his defense asserted at his Senate trial that a trade of U.S. military aid for political favors — even if proven — could not be grounds for his impeachment.

Trump’s defenders relied on retired professor Alan Dershowitz, a member of their team, who told senators that every politician conflates his own interest with the public interest. “It cannot be impeachable,” he declared Wednesday.

Democrats pressed hard to force the Senate to call more witnesses to testify, but Republicans appeared intently focused on bringing the impeachment trial to a vote of acquittal, possibly in a matter of days. Even new revelations from former national security adviser John Bolton were countered by the president’s lawyers, who used Wednesday’s unusual question-and-answer session to warn off prolonging the proceeding, insisting senators have heard enough.

Democrats argued Bolton’s forthcoming book cannot be ignored. It contends he personally heard Trump say he wanted military aid withheld from Ukraine until it agreed to investigate Joe Biden and his son, Hunter Biden — the abuse of power charge that is the first article of impeachment.

The vote on calling witnesses is expected by Friday.

As Chief Justice John Roberts fielded queries, Texas Republican Ted Cruz asked if it mattered whether there was a quid pro quo?

Simply, no, declared Dershowitz, who said many politicians equate their reelection with the public good. “That’s why it’s so dangerous to try to psychoanalyze a president,” he said.

“All quid pro quos are not the same,” he retorted. Some might be acceptable, some not. “And you don’t need to be a mind reader to figure out which is which. For one thing, you can ask John Bolton.”

With voting on witnesses later this week, Democrats, amid the backdrop of protesters swarming the Capitol, are making a last-ditch push to sway Republicans to call Bolton and others to appear for testimony and ensure a “fair trial.”

Trump faces charges from the House that he abused his power like no other president, jeopardizing Ukraine and U.S.-Ukraine relations by using the military aid as leverage while the vulnerable ally battled Russia. The second article of impeachment says Trump then obstructed the House probe in a way that threatened the nation’s three-branch system of checks and balances.

Over two days, senators are grilling the House Democrats prosecuting the case and the Republican president’s defense team. Dozens of questions were asked and answered Wednesday in five-minute clips, with senators under orders to sit silently without comment, submitting their questions in writing. They finished shortly past 11 p.m. and were expected to keep going Thursday.

Democratic leader Chuck Schumer asked whether the Senate could really render a fair verdict without hearing from Bolton or acting White House chief of staff Mick Mulvaney, both potential eyewitnesses to Trump’s actions.

“Don’t wait for the book. Don’t wait ‘til March 17, when it is in black and white to find out the answer to your question,” Schiff told the Senate.

The White House action could delay the book’s publication if Bolton, who resigned last September — Trump says he was fired — is forced to revise his draft.

GOP senators are straining to balance the new revelations with pressure for quick acquittal. They have been sternly warned by party leaders that calling Bolton as a witness could entangle the trial in lengthy legal battles and delay Trump’s expected acquittal.

White House lawyers made exactly that point. Attorney Pat Philbin said in response to the Democrats’ first question, “This institution will effectively be paralyzed for months.” That was echoed by others.

Senate Majority Leader Mitch McConnell huddled privately with senators for a third consecutive day, acknowledging he didn’t yet have the votes to brush back Democratic demands for witnesses now that revelations from Bolton have roiled the trial. But Republicans said they were making progress.

Republican ideas for dealing with Bolton and his book were fizzling almost as soon as they arose — among them, “swapping” witnesses with Democrats or issuing a subpoena for Bolton’s manuscript.

Most Republican senators don’t want to extend the trial by calling Bolton, and most Democrats would rather avoid dragging the Bidens further into the impeachment proceedings. The Bidens were a focus of defense arguments, though no evidence of wrongdoing has emerged.

Bolton writes in a forthcoming book that Trump told him he wanted to withhold military aid from Ukraine until it helped with investigations into Biden. That assertion, if true, would undercut a key defense argument and go to the heart of one of the two articles of impeachment against the president.

“I think Bolton probably has something to offer us,” said Sen. Lisa Murkowski, R-Alaska. She met privately Wednesday with McConnell.

Trump disagreed in a tweet Wednesday in which he complained that Bolton, after he left the White House, “goes out and IMMEDIATELY writes a nasty & untrue book. All Classified National Security.”

The uncertainty about witnesses arises days before crucial votes on the issue. In a Senate split 53-47 in favor of Republicans, at least four GOP senators must join all Democrats to reach the 51 votes required to call witnesses, decide whom to call or do nearly anything else in the trial.

Republican Sen. Susan Collins of Maine tried to give fresh momentum to a one-for-one witness deal, saying it’s “very important that there be fairness, that each side be able to select a witness or two.” But Democrats dismissed those offers.

Collins, Murkowski and Utah Sen. Mitt Romney signaled an interest in calling Bolton or other witnesses, and questions and answers at times appeared directed at them.

Schiff’s response to Dershowitz focused on one particular senator: He asked his audience to imagine what would have happened if then-President Barack Obama asked the Russians to dig up dirt on then-candidate Romney, the GOP’s 2012 presidential nominee?

Romney, standing at the back of the chamber, smiled occasionally at mention of his name.

Far from voiding the last election, Schiff said, impeachment is protecting the next one, in 2020, from any future Trump efforts to ask foreign governments to intervene.

Republicans tried to engage the president’s defense, at times raising the profile of the still anonymous government whistleblower whose complaint about Trump’s July 25 call with Ukraine sparked the impeachment inquiry. Democrats kept focus on the case for Trump’s conviction and removal, which would require 67 votes in the Senate and seems unlikely.

At times, there were telling exchanges. In one, the White House team could not fully respond when Collins and Murkowski asked if Trump had ever pursued Biden investigations before the former vice president announced his presidential bid in 2019.

In another, Dershowitz acknowledged he has changed his thinking on what the Founders intended with impeachment and keeps “refining” his views.

As the long night drew to a close, so did Schiff’s remarks, warning senators they were lowering the bar for Trump, dressing it up with legalese.

“Corruption is still corruption,” he said.

One person watching from the sidelines Wednesday was Lev Parnas, the indicted associate of Trump lawyer Rudy Giuliani. Parnas arrived at the Capitol but could not enter the Senate with his court-ordered electronic-tracking device. He has turned over evidence for the investigation, and said he wants to testify.