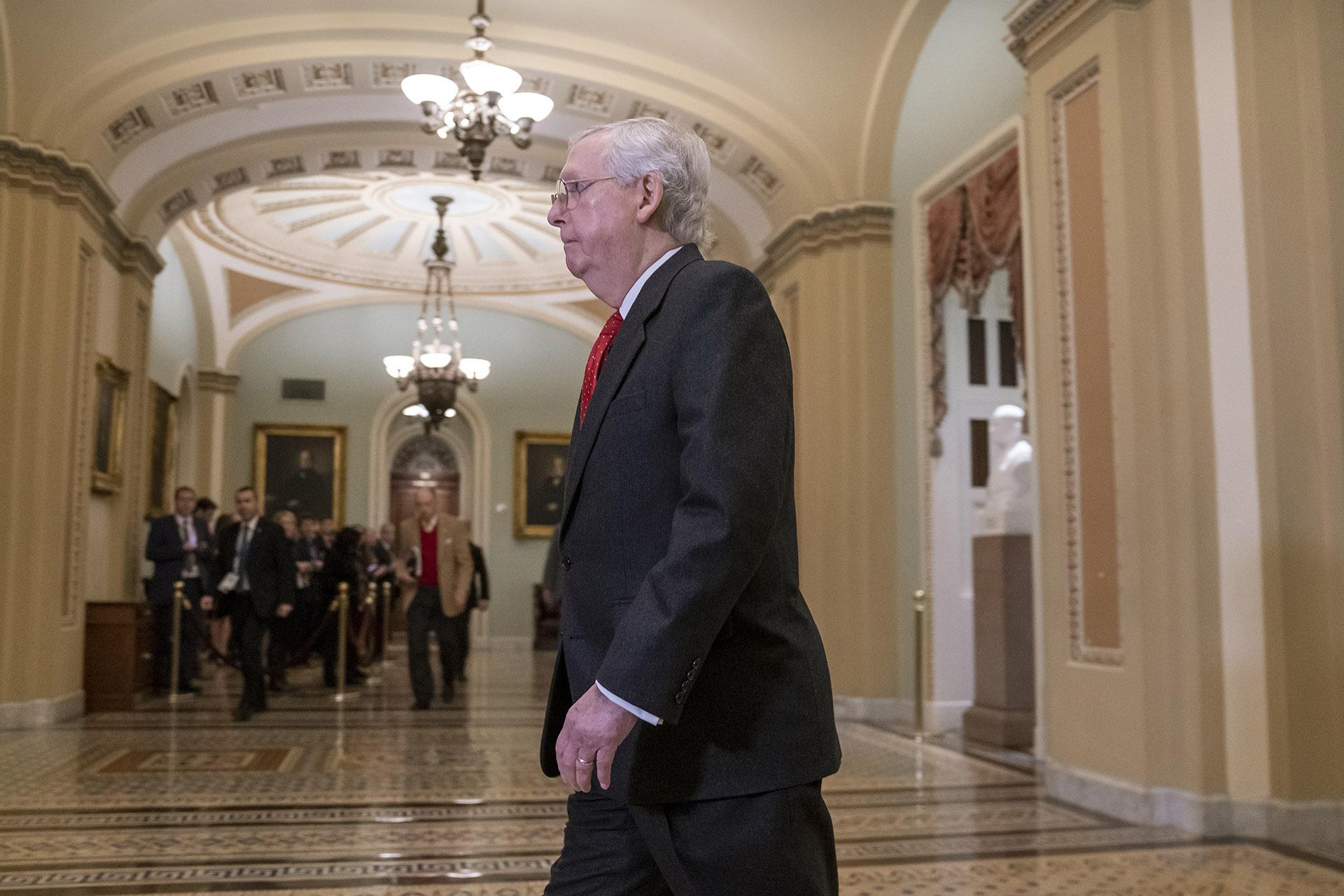 Senate Majority Leader Mitch McConnell, R-Ky., arrives at the Senate for the start of the impeachment trial of President Donald Trump on charges of abuse of power and obstruction of Congress, at the Capitol in Washington, Tuesday, Jan. 21, 2020. (AP Photo / J. Scott Applewhite)

WASHINGTON (AP) — President Donald Trump’s impeachment trial quickly burst into a partisan fight Tuesday at the Capitol as Democrats objected strongly to rules proposed by the Republican leader for compressed arguments and a speedy trial.

Democrats warned that the rules package from Trump’s ally, Senate Majority Leader Mitch McConnell, could force midnight sessions that would keep most Americans in the dark and create a sham proceeding.

“This is not a process for a fair trial, this is the process for a rigged trial,” Rep. Adam Schiff, D-Ca., the chairman of the House Intelligence Committee leading the prosecution, told reporters. He called it a “cover-up.”

McConnell opened the chamber promising a “fair, even handed” process — and warned that the Senate would stay in session until his proposed rules package was adopted.

“The president’s lawyers will finally receive a level playing field,” the Kentucky Republican said, contrasting it with the House impeachment inquiry.

The first test was coming as senators prepared to begin debate and vote on McConnell’s proposed rules. The package diverges in some ways from the most recent impeachment trial, of Bill Clinton, by condensing opening arguments into two days for each side. It pushes votes to consider whether or not to hear from witnesses later in the process.

Republican senators, who hold the majority, are falling in line behind his plan.

“Sure it will be a fair trial when you’ve got 24 hours of arguments on both sides,” Sen. Chuck Grassley of Iowa told state reporters on a conference call.

The rare impeachment trial, unfolding in an election year, is testing whether Trump’s actions toward Ukraine warrant removal at the same time that voters are forming their own verdict his White House.

Trump himself, in Davos, Switzerland, for an economic conference, denounced the proceedings as “a total hoax,” as he does daily, and said, “I’m sure it’s going to work out fine.”

With Trump’s presidency on the line, and the nation deeply divided just weeks before the first Democratic primary contests, four senators who are also presidential candidates will be off the campaign trail, seated as jurors.

“My focus is going to be on impeachment,” Sen. Bernie Sanders, the Vermont independent running for the Democratic nomination, told reporters. He said his supporters would keep working “to defeat the most dangerous president in American history.”

The Democrats say the prospect of middle-of-the-night proceedings, without allowing new witnesses or even the voluminous House records of the trial, will leave the public without crucial information about Trump’s political pressure campaign on Ukraine and the White House’s obstruction of the House impeachment probe.

“The McConnell rules seem to be designed by President Trump for President Trump,” said the Senate Democratic leader, Chuck Schumer. He vowed to call for a series of votes to amend the rules and demand testimony and documents, but it seemed unlikely Republicans would break from the party to join Democrats.

“This is a historic moment,” Schumer said. “The eyes of America are watching. Republican senators must rise to the occasion.”

If the senators agree to McConnell’s proposal for speedy trial and acquittal, Schiff said, “It will not prove the president innocent, it will only prove the Senate guilty of working with the president to obstruct the truth from coming out.”‘

McConnell had promised to set rules similar to the last impeachment trial, of President Bill Clinton in 1999, but his resolution diverged in key ways.

GOP Sen. Mitt Romney of Utah, whose votes are being closely watched, said he was satisfied with the proposal, even as he hopes to hear from former national security adviser John Bolton who had a front-row seat to Trump’s actions.

On the night before the trial, Trump’s lawyers argued for swift rejection of the “flimsy” charges in a trial that never should have happened.

“All of this is a dangerous perversion of the Constitution that the Senate should swiftly and roundly condemn,” the president’s lawyers wrote in their first full filing Monday. “The articles should be rejected and the president should immediately be acquitted.”

Trump’s legal team doesn’t dispute Trump’s actions — that he called the Ukraine president and asked for a “favor” during a July 25 phone call. In fact, the lawyers included the rough transcript of Trump’s conversation as part of its 110-page trial brief submitted ahead of the proceedings.

Instead the lawyers for the president, led by White House Counsel Pat Cipollone and a TV-famous legal team including Alan Dershowitz, say the two charges against the president don’t amount to impeachable offenses and Trump committed no crime.

Legal scholars have long insisted the framers of the Constitution provided impeachment as a remedy for “other high crimes and misdemeanors,” a particularly broad definition that doesn’t mean simply specific criminal acts.

Democrats in prosecuting the case against the president point in particular to a General Accountability Office report that found the White House violated federal law by stalling money to Ukraine that had been approved by Congress.

They wrote, “President Trump’s lengthy brief to the Senate is heavy on rhetoric and procedural grievances, but entirely lacks a legitimate defense of his misconduct.” The president would “rather discuss anything other than what he actually did,” the Democrats wrote.

The first several days of the trial are expected to be tangled in procedural motions playing out on the Senate floor and behind closed doors. Senators must refrain from speaking during the trial proceedings.

Roberts administered the oath to one remaining senator, James Inhofe, who was attending a family medical issue in Oklahoma last week when the other senators vowed the oath and signed the oath book.

Like Trump, House Speaker Nancy Pelosi will also be away for the proceedings, leading a bipartisan congressional delegation to Poland and Israel to commemorate the 75 years since the liberation of Auschwitz at the end of World War II.

She issued a statement Tuesday denouncing McConnell’s proposed ground rules as a “sham” because of the compressed schedule and lack of guarantee that witnesses will be called or that evidence gathered by the House would be admitted in the Senate trial.

“The Senate GOP Leader has chosen a cover-up for the President, rather than honor his oath to the Constitution,” Pelosi said.

Also Tuesday, the House Democratic managers overseeing the impeachment case asked Cipollone, the president’s lead lawyer at the trial, to disclose any “first-hand knowledge” he has of the charges against Trump. They said evidence gathered so far indicates that Cipollone is a “material witness” to the allegations at hand.

House Democrats impeached the Republican president last month on two charges: abuse of power by withholding U.S. military aid to Ukraine as he pressed the country to investigate Democratic rival Joe Biden, and obstruction of Congress by refusing to cooperate with their investigation.

The Constitution gives the House the sole power to impeach a president and the Senate the final verdict by convening as the impeachment court for a trial.

The president late Monday named eight House Republicans, some of his fiercest defenders, to a special team tasked with rallying support beyond the Senate chamber in the court of public opinion.

Four TV monitors were set up inside the Senate chamber to show testimony, exhibits and potentially tweets or other social media, according to a person familiar with the matter but unauthorized to discuss it on the record. House managers practiced their opening arguments well into the night.

No president has ever been removed from office by the Senate. With its 53-47 Republican majority, the Senate is not expected to mount the two-thirds voted needed for conviction. Even if it did, the White House team argues it would be an “‘unconstitutional conviction’’ because the articles of impeachment were too broad.