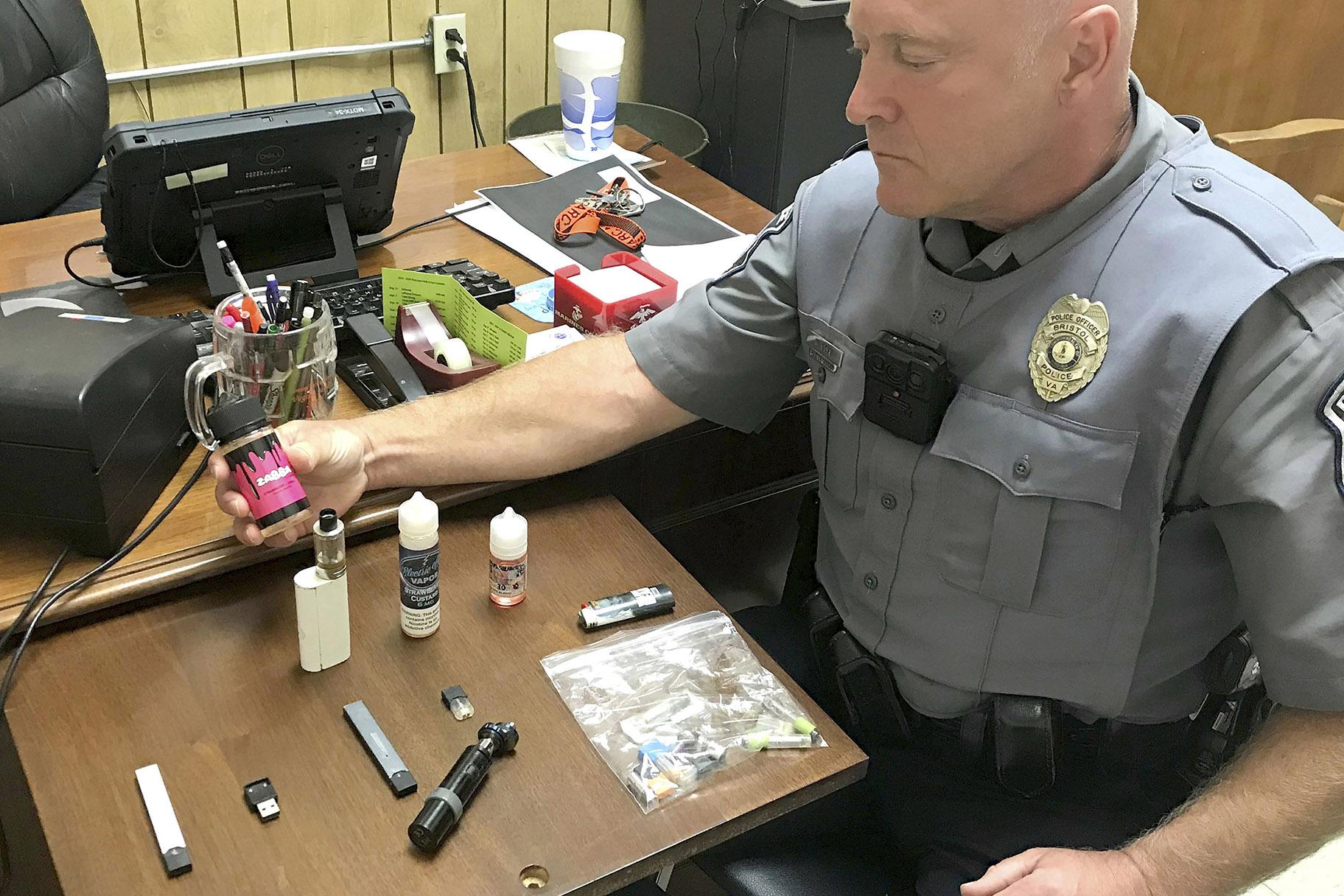 In this Sept. 23, 2019 photo, Bristol, Va., Police Officer Marlin Goff shows some of the vaping products he has confiscated from students at a high school. (Tim Dotson / Bristol Herald Courier via AP)

The legislation would raise the minimum age to purchase all tobacco products, including electronic cigarettes, from 18 to 21 nationwide, a step long-sought by health advocates. But in the past year Juul and Altria have emerged as the biggest supporters of the measure, blanketing Capitol Hill with lobbyists and advertisements touting their support for a national “Tobacco 21” law.

Tobacco critics contend the companies’ support is calculated to head off even harder-hitting government action: a ban on all flavored tobacco products, including fruit and dessert e-cigarettes. Their stance puts them in the unusual position of criticizing a move they long supported, arguing that the sales restriction isn’t enough.

“Altria and Juul clearly support this in order to argue that no other action is necessary,” said Matthew Myers of the Campaign for Tobacco-Free Kids. “If you don’t eliminate the flavors that the industry has used to fuel the epidemic, you won’t solve the youth e-cigarette crisis.”

The bipartisan legislation, supported by Senate Majority Leader Mitch McConnell of Kentucky, has been attached to a package of must-pass spending bills that will keep the government running into next year.

Juul and Altria — the vaping company’s biggest investor — threw their support behind the bill earlier this year amid a backlash against e-cigarettes at the local, state and national levels.

E-cigarettes are battery-powered devices that typically heat a flavored nicotine solution into an inhalable aerosol. Current federal law prohibits sales of e-cigarettes and all other tobacco products to those under 18. But more than one in four high school students report vaping regularly, according to the latest government figures. And health officials have called the vaping trend an “epidemic.”

Until September, Juul argued that its sweet flavors — including mango, mint and fruit — could help adult smokers switch from traditional cigarettes to vaping. But the company dropped that message as President Donald Trump announced plans to remove virtually all vaping flavors from the market, due to their appeal to children. The Silicon Valley company has halted sales of all but two of its flavors, menthol and tobacco, and pledged not to oppose Trump’s plan.

But momentum for the nationwide ban has faded amid pushback from vaping advocates and some conservative groups. And Trump has voiced support for alternative approaches to keep e-cigarettes away from kids, including raising the purchase age to 21. The age hike is expected to limit the supply of all vaping and tobacco products in high schools by putting them out of reach to 12th graders.

Myers’ group and other health advocates say Congress should both raise the age limit and ban all “kid-friendly” flavors.

Even with most of Juul’s flavors off the market, smaller companies continue to market an array of flavored products, including “grape slushie,” “strawberry cotton candy” and “sea salt blueberry.” And the industry’s main trade association is suing to keep e-cigarettes, including flavors, widely available.

Altria, the nation’s largest tobacco company, said it supports a “clean” Tobacco 21 bill — focused exclusively on raising the age limit — because it is the “quickest and most effective” way to address the recent surge in teen vaping. For decades previously, Altria and other tobacco companies aggressively defended the 18-year-old minimum purchase age.

Juul has similarly supported legislation that raises the purchase age without touching flavors. And while the companies say they lobby separately, both quickly backed the Tobacco 21 bill introduced in May by McConnell and Virginia Democratic Sen. Tim Kaine.

The companies’ support sapped attention away from other proposals that would have gone much further. For example, a bill from New Jersey Democratic Rep. Frank Pallonewould have raised the purchase age to 21 and banned flavors from all vaping and tobacco products — including menthol cigarettes — and prohibited online sales. The bill was endorsed by a dozen health groups including the American Academy of Pediatrics, the American Cancer Society and the American Lung Association.

“Flavors attract kids and kids are the tobacco industry — including the e-cigarette industry’s — future,” said Erika Sward, a vice president with the American Lung Association.

But efforts to advance flavor restrictions in the Senate fell flat, including a bill sponsored by Sen. Lisa Murkowski, R-Alaska, and Sen. Dick Durbin, D-Ill, that was withdrawn from committee consideration at the last minute.

“Because I wasn’t certain that I had the votes at the time,” Murkowski told The Associated Press. “You don’t want to lose.”

The logic for hiking the purchase age for cigarettes is clear: most underage teens who use tobacco get it from older friends. An estimated 90 percent of smokers start before age 18.

Delaying access to cigarettes is expected to produce major downstream health benefits, with one government-funded report estimating nearly 250,000 fewer deaths due to tobacco over several decades.

Still, anti-tobacco experts say age restrictions are only effective when they are vigorously enforced, and tobacco sales can fall through the cracks amid a patchwork of local, state and federal law enforcement. They point to underage drinking as an example of the limited impact of age-based restrictions.

State laws banning tobacco sales to those under 18 evolved over several decades and were reinforced by a federal law in 2009. The same law banned all flavors from traditional cigarettes except menthol, which received a special exception at the behest of tobacco lobbyists.

More than a third of U.S. states — including California, Illinois, New York and Texas — and the District of Columbia have already raised their minimum purchase age to 21. Anti-smoking groups have tracked the trend with measured support, noting the role of Juul and Altria lobbyists behind many of the efforts.

In several cases, anti-tobacco advocates have flagged provisions that they say undercut the state laws’ effectiveness. These provisions, known as pre-emption, can stop city and county officials from imposing stricter tobacco sales limits that go beyond the state law.

Juul and Altria said they supported all state Tobacco 21 laws passed this year, regardless of whether they included such provisions.

In Washington, D.C., Juul’s lobbying budget ballooned to more than $3.1 million in the first 9 months of 2019 year, nearly twice the company’s spending for all of 2018.

Altria has spent $7.4 million in 2019, roughly even with its lobbying budget for 2018. The company’s political action committee and employees have given $37,000 to McConnell’s 2020 re-election campaign, according to federal records compiled by the non-profit Center for Responsive Politics.

Among those lobbying on Juul’s behalf are Jim Esquea, who worked during the Obama administration at the Department of Health and Human Services, and Ted McCann, who was a top policy aide to former House Speaker Paul Ryan.

“Whether you’re a Trump fan or a traditional Republican conservative or a liberal Democrat, they’ve got someone you know,” Myers said.