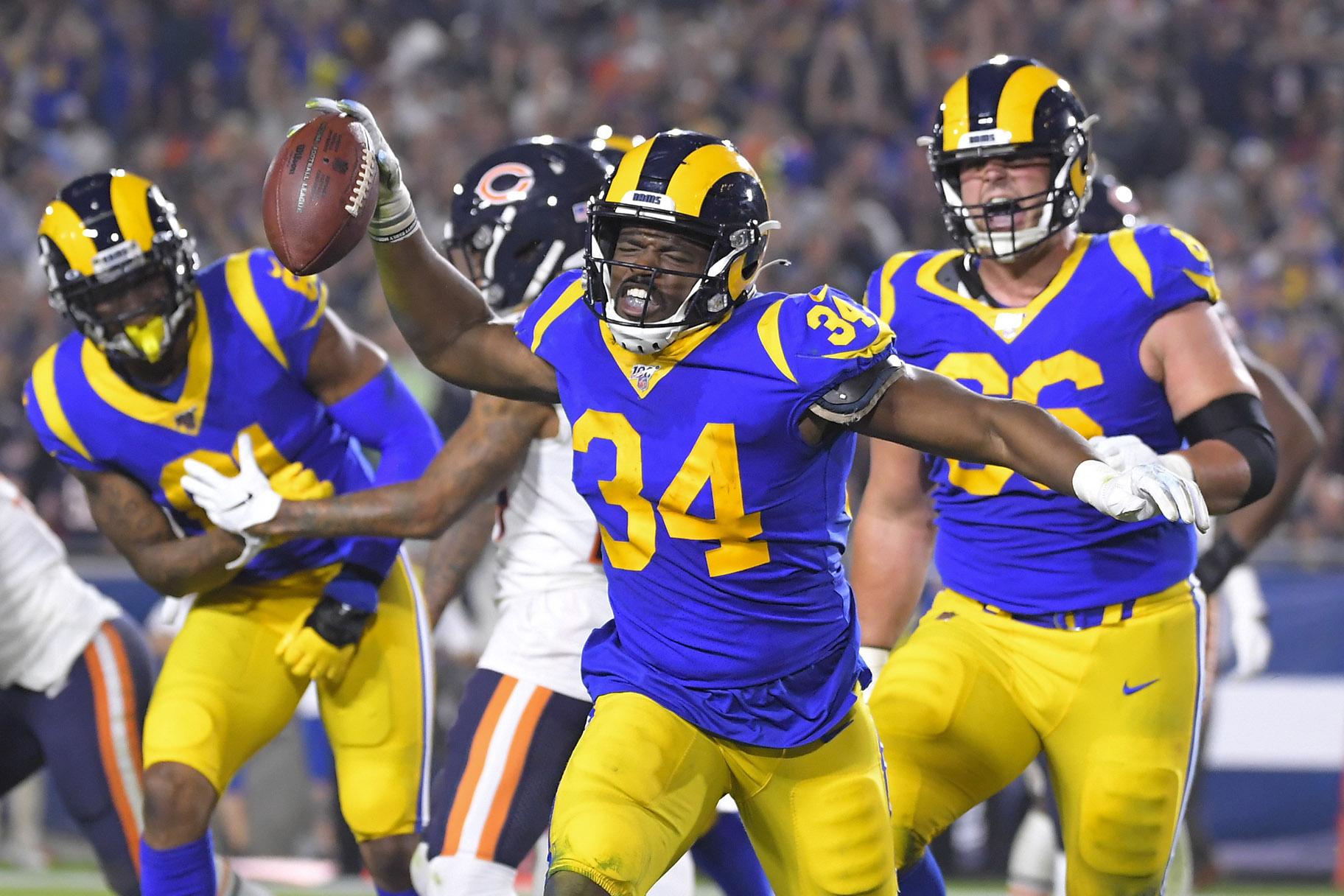 Los Angeles Rams running back Malcolm Brown celebrates after scoring against the Chicago Bears during the second half of an NFL football game Sunday, Nov. 17, 2019, in Los Angeles. (AP Photo / Mark J. Terrill)

LOS ANGELES (AP) — Todd Gurley and Malcolm Brown ran for touchdowns and the Los Angeles Rams were able to ground out a 17-7 victory over the Chicago Bears on Sunday night.

Gurley tied a season high with 97 yards on 25 carries, scoring on a 1-yard carry up the middle with 3:28 remaining in the first half to extend Los Angeles’ lead to 10-0.

After Tarik Cohen’s third-quarter touchdown catch brought Chicago to 10-7, the Rams (6-4) put it out of reach with 3:35 remaining in the fourth quarter on Brown’s 5-yard run.

Jared Goff was 11 of 18 for 173 yards and an interception. That is the least attempts the fourth-year quarterback has had when he has started. Cooper Kupp was the Rams’ only active starting receiver, which might explain why the Rams relied more on their ground game.

The Bears (4-6) ran 22 more plays than the Rams but averaged only 3.6 yards. Mitchell Trubisky was 24 of 43 for 190 yards with a touchdown and interception. Chase Daniel replaced Trubisky for the final series.

Gurley — who went over 5,000 yards of career rushing — came in averaging 53.5 rushing yards per game, but had 63 in the first half, including three carries of 10 yards or more. His TD was set up when Goff connected with Kupp for a 50-yard gain. Kupp beat Buster Skrine up the left sideline and hauled in the pass at the 15 before he fumbled going out of bounds at the 1. It appeared as if Kupp might have fumbled it at the pylon, which would have been a Chicago touchback.

Chicago got to 10-7 on its first drive of the second half when Trubisky connected with Cohen for a 12-yard score. Cohen beat linebacker Cory Littleton in single coverage to score his third touchdown of the season.

The Bears drove inside the Rams 35 on their first three series but had nothing to show for it. Eddy Piñeiro missed 48- and 47-yard field goal attempts and Chicago turned it over on downs on the second series.

Goff’s pass was intercepted by Roquan Smith at the Bears 17 to end the Rams’ second drive before they scored on their next possession. Greg Zuerlein nailed a 38-yard field goal with 11:31 remaining in the second quarter to give the Rams a 3-0 lead.

Rams: WR Robert Woods was listed as a surprise inactive before the game due to a personal issue. Woods is second on the team in receptions (45) and had seven catches for 61 yards in last year’s game at Chicago. Brandin Cooks (concussion) also was inactive,

Bears: RT Bobby Massie suffered a back injury during the second half. He didn’t return.