Video: The latest in the impeachment inquiry with U.S. Rep. Mike Quigley and Heidi Kitrosser, a visiting professor at Northwestern University Law School.

WASHINGTON (AP) — In a striking reversal, a top diplomat revised his testimony in the House impeachment inquiry to acknowledge that U.S. military aid to Ukraine was being withheld until the foreign ally promised to investigate corruption as President Donald Trump wanted.

The three-page update from U.S. Ambassador Gordon Sondland, tucked beneath hundreds of pages of sworn testimony released Tuesday, provides new insight into Trump’s push for Ukraine to investigate Democrats and Joe Biden in what the Democrats call a quid pro quo at the center of the House inquiry.

Specifically, Sondland said he now recalls telling a top aide to Ukraine President Volodymyr Zelenskiy, on the sidelines of a Warsaw meeting with U.S. Vice President Mike Pence, that military aid to the country “would likely not occur” until Ukraine had provided a public anti-corruption statement “as we have been discussing for many weeks.”

Trump has denied any quid pro quo, but Democrats say that is the singular narrative developing from the president’s July 25 call with Zelenskiy . In that call, Trump, asked for “a favor,” the spark for the impeachment inquiry.

Rep. Adam Schiff, D-Calif., the chairman of the Intelligence Committee, said the House panels conducting the inquiry are releasing the word-by-word transcripts of the past weeks’ closed-door hearings so the American public can decide for themselves.

“This is about more than just one call,” Schiff wrote Tuesday in an op-ed in USA Today. “We now know that the call was just one piece of a larger operation to redirect our foreign policy to benefit Donald Trump’s personal and political interests, not the national interest.”

Pushing back, Trump Press Secretary Stephanie Grisham issued a statement saying the transcripts “show there is even less evidence for this illegitimate impeachment sham than previously thought.”

House investigators released transcripts from Sondland, a wealthy businessman who donated $1 million to Trump’s inauguration and is the U.S. ambassador to the European Union, and from Kurt Volker, the former special envoy to Ukraine. The panels also announced they want to hear from Trump’s acting chief of staff, reaching to the highest levels of the White House.

The documents include dozens of pages of text messages as the diplomats tried to navigate the demands of Rudy Giuliani, the president’s personal lawyer, who they soon learn is running a back channel U.S. foreign policy on Ukraine.

Sondland testified that he spoke with Secretary of State Mike Pompeo about Giuliani, “and Pompeo rolled his eyes and said: ‘Yes, it’s something we have to deal with.’“

Pressed by investigators, Sondland -- who initially said he didn’t know that the Ukraine firm Burisma that Trump wanted to investigate was linked to the Biden’s son, Hunter -- also testified that it would be improper for the U.S. to prompt Ukraine to investigate the Biden family. “It doesn’t sound good.”

In his revised testimony, Sondland says his memory was refreshed by the opening statements of two other inquiry witnesses, the top U.S. diplomat in Ukraine, William Taylor, and Tim Morrison, a European expert at the National Security Council.

Sondland also told investigators Trump was in a “bad mood” and nearly hung up on him when he asked specifically whether the White House was withholding military aid for the investigation.

“I want nothing. I want no quid pro quo,” Trump said, according to Sondland. “I want Zelenskiy to do the right thing.” 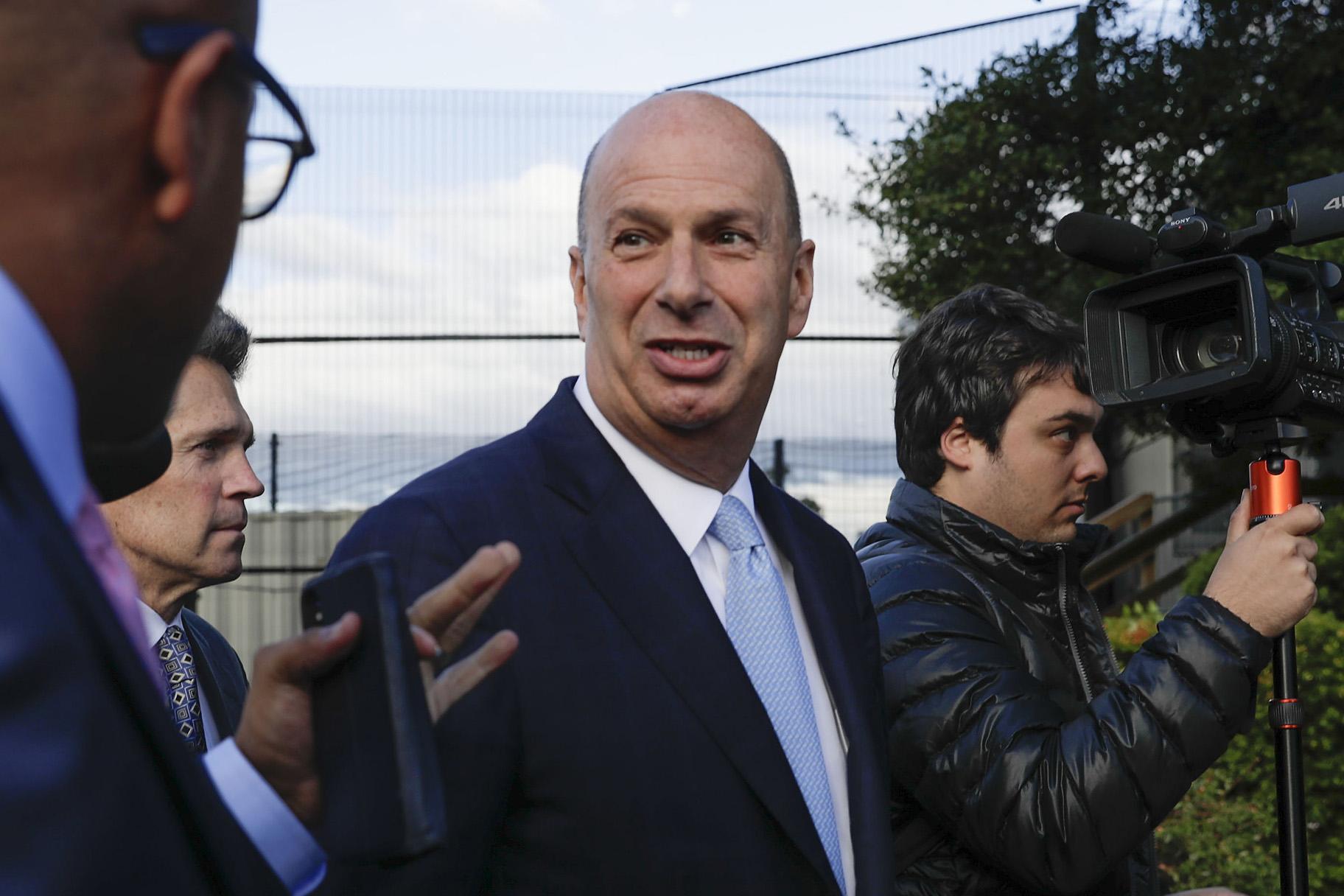 In this Oct. 17, 2019, file photo U.S. Ambassador to the European Union Gordon Sondland, center, arrives for a interview with the House Committee on Foreign Affairs, House Permanent Select Committee on Intelligence, and House Committee on Oversight and Reform on Capitol Hill in Washington. (AP Photo / Pablo Martinez Monsivais, File)

Public hearings could begin as soon as next week in the impeachment inquiry that Trump says is illegitimate and Republicans in Congress call a sham.

The release of more transcripts comes as the Trump administration resumes its stonewalling of the inquiry. Two more White House officials, an energy adviser and a budget official, declined to appear Tuesday before investigators, even after one received a subpoena .

Meanwhile, Investigators say they want to hear from chief of staff Mick Mulvaney because his news conference last month amounted to “nothing less than a televised confession” of Trump’s efforts to have Ukraine investigate Democrats and Biden as the White House was blocking military funding for the Eastern European ally.

Trump says he did nothing wrong, and Mulvaney later walked back his remarks.

The White House has instructed its officials not to comply with the impeachment inquiry being led by House Democrats. It is uncertain if Mulvaney will appear.

Republicans have been unable to deliver a unified argument against the impeachment probe, but one of them, Senate Majority Leader Mitch McConnell, said Tuesday he’s “pretty sure” how it all will end.

“I don’t think there’s any question it would not lead to a removal” of Trump from the White House, McConnell said.

Most of those who have testified before the House panel are from the ranks of the State Department, including recalled U.S. Ambassador to Ukraine Marie Yovanovitch , whose testimony was released Monday.

Volker and Sondland both testified they were disappointed after briefing Trump at the White House upon their return from Zelenskiy’s inauguration in May as a new leader of the young democracy vowing to fight corruption.

Trump “went on and on and on about how Ukraine is a disaster and they’re bad people,” Sondland testified.

Trump holds an alternative view that it was Ukraine, not Russia, that interfered in the 2016, a theory counter to U.S. intelligence. “‘They tried to take me down.’ He kept saying that over and over,” Sondland said.