On the South Side of Chicago is a relatively small but academically renowned museum whose founder James Henry Breasted helped rewrite the history of human civilization and was reportedly the inspiration for Steven Spielberg’s character Indiana Jones.

And now, just in time for its centennial, the Oriental Institute at the University of Chicago has just completed a five-year, multimillion-dollar makeover of the museum that bears its name and showcases the archeological treasures unearthed by OI expeditions.

Breasted “was the first American Egyptologist,” said Christopher Woods, director of the Oriental Institute. “And he had a radical idea that civilization – that who we are and how we came to live as humans together – didn’t originate in Greece or Rome as many commonly think but originated in the complex civilizations of the ancient Middle East in a region that he vividly termed the Fertile Crescent.”

Woods said that Breasted was interested in the origins of western civilization.

With the collapse of the Ottoman Empire at the end of World War I, Breasted undertook a series of daring archeological expeditions.

“Breasted really was a visionary. He understood the moment was now. World War I is over, these regions were now open to scholarship,” said Woods. “And when he got the initial grant from Rockefeller to create the OI he went on this epic 11-month voyage throughout the Middle East. It was the stuff of legend and it had its Indiana Jones elements to it. But at his core he was a very careful and methodical scholar. Somebody who paid incredible attention to detail.” 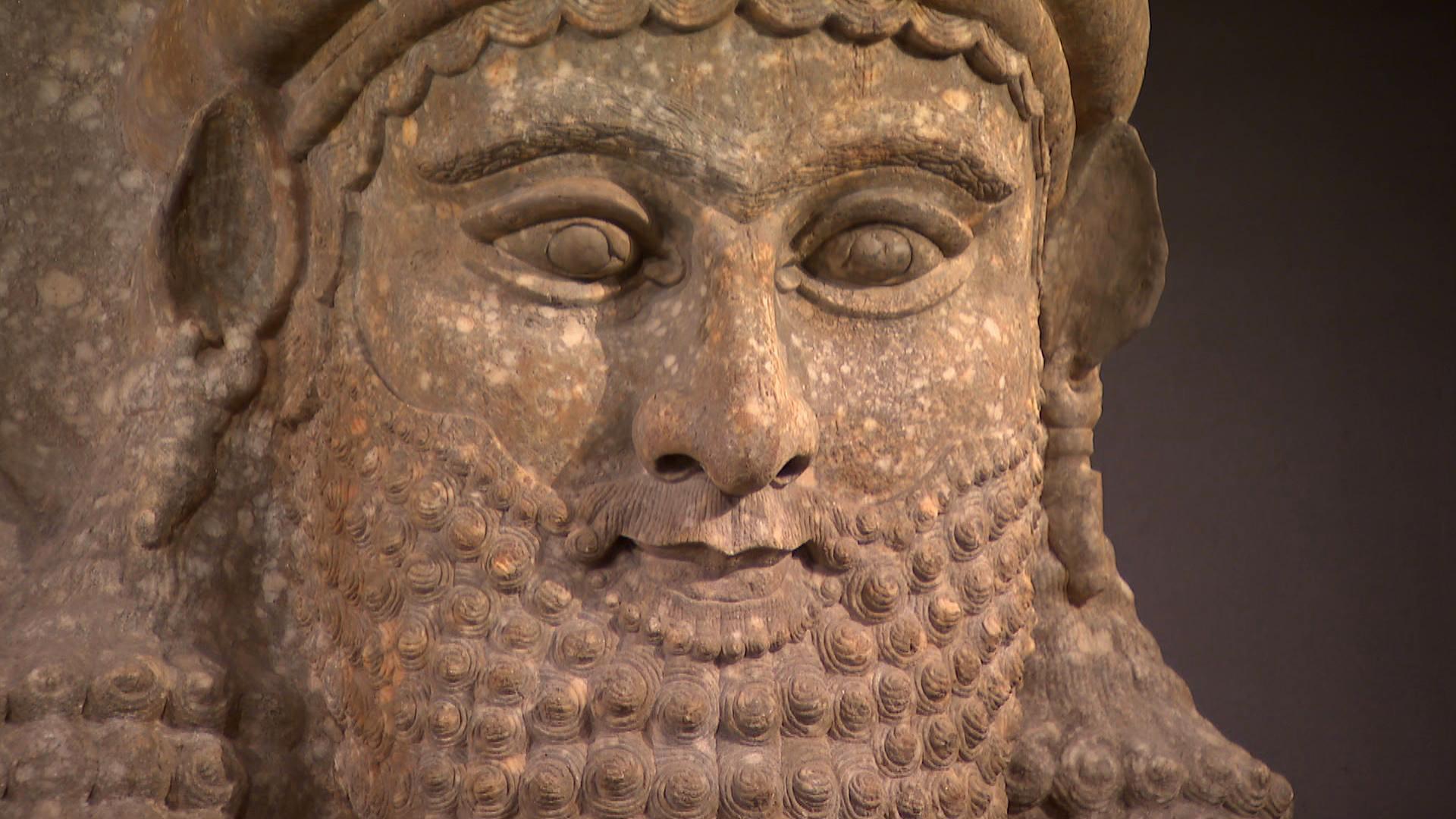 Among the most spectacular objects those early expeditions uncovered is an ancient protective deity called a Lamassu.

“This is a monumental, fantastic creature,” said Jean Evans, chief curator and deputy director at the museum. “It’s from the Assyrian royal city of Khorsabad which is in present day Northern Iraq. It dates to the 8th Century B.C. It was excavated by Oriental Institute archeologists and it depicts a fantastic creature. It has a human head. It has horns. It is winged and it is a bull. And this would have guarded the entrance to the throne room of the king’s palace at Korsabad.”

Another monumental piece that can be found in the museum’s Persian Gallery is a huge head of a bull carved in black stone. It was excavated in the 1930s.

“This wonderful bull head and actually all of the objects in this gallery are monuments from Persepolis which was a dynastic capital of the Achaemenid Empire – so this is roughly 550 to 330 B.C.,” said Woods.

But while the museum’s colossal statues and reliefs may first draw the eye, there are many small treasures among the roughly 5,000 objects on display – including a tiny piece of the Dead Sea Scrolls and the earliest known fragment of the Middle Eastern folk tale “A Thousand and One Nights” that has been put on display for the first time.

“What I like about it in particular is that the large writing that you see on it is the text from ‘A Thousand and One Nights,’” said Evans. “But this was a piece of paper and it was reused over time. … And at one point someone was a witness to a contract and they signed to show that they were a witness to it and they dated it 879 A.D.

Evan’s enthusiasm for the collection she has helped put together and curate is clear.

“There are things you can’t miss such as our monumental Lamassu, but there’s also things that you shouldn’t miss. We have opportunities here that no one else has. So for example you can see 5,000 years of ceramics or 5,000 years of human figurines,” said Evans.

But perhaps the most significant object on display is also the least impressive looking: a dictionary. But it represents a monumental scholastic endeavor more than 90 years in the making that has transformed our understanding of the ancient world. Its creation resurrecting a languages and dialects with all their nuance, thereby shedding fresh light on the history of the region.

“What’s so special about it is that it provides examples of the words in context – that’s why it’s 26 volumes –  much like Oxford English Dictionary,” said Woods. “This project, the Chicago Assyrian Dictionary, really was one of the great humanistic endeavors of the 20th Century.

And with a series of events to mark the centennial, Woods hopes that the achievements of the OI will finally be revealed to a wider audience beyond academia. And that the museum that is often referred to as a “hidden gem” will be hidden no more.

Syrian artist and architect Mohamad Hafez is exhibiting his work at the Oriental Institute and is the OI’s first “interpreter-in-residence.” Hafez was born in Syria, raised in Saudi Arabia and educated in the Midwest. His work explores the suffering, loss of life, and physical destruction in Syria and other parts of the Middle East.

In the video below, Hafez discusses two of his works: “Hiraeth” and “Collateral Damage.”