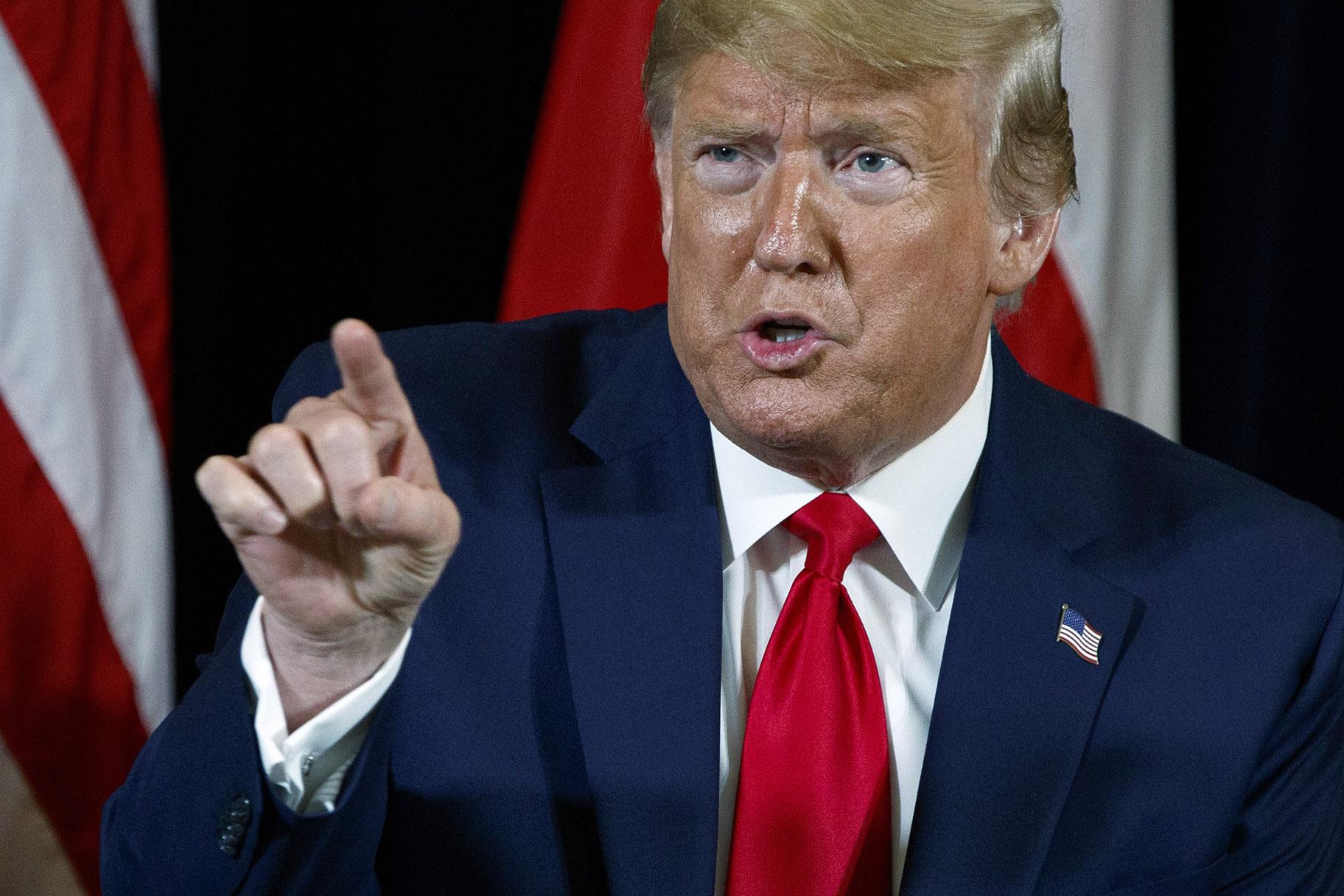 In the call this summer, Trump raised allegations, without citing any evidence, that the former vice president sought to interfere with a Ukrainian prosecutor in regard to son Hunter.

After saying Giuliani and Barr would be in touch, Trump referenced Ukraine’s economy, saying: “Your economy is going to get better and better I predict. You have a lot of assets. It’s a great country.”

Zelenskiy had earlier raised to Trump his desire to purchase additional Javelin anti-tank missiles from the U.S.

The conversation between the two leaders is one piece of a whistleblower’s complaint, which followed the July 25 call and is central to the formal impeachment inquiry launched Tuesday by House Speaker Nancy Pelosi.

The White House account reveals that Trump was willing to engage a foreign leader to dig up dirt on a political foe and that he went so far as to volunteer his attorney general to help. But Trump appears to stop short in the call of any explicit quid pro quo, such as linking Ukraine’s help to American military aid or other assistance. 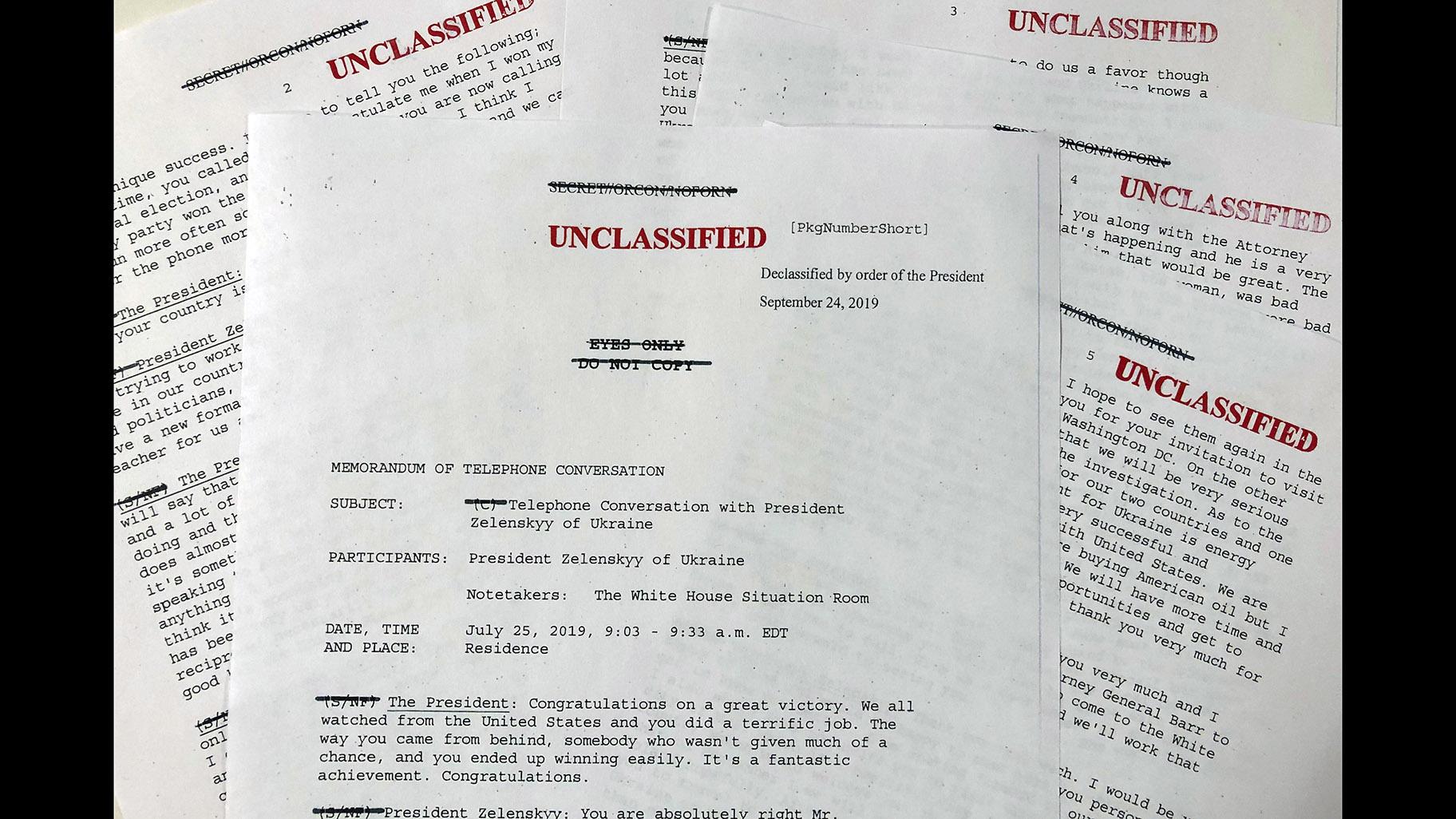 Document: Read the reconstructed transcript. Days before the call, Trump froze nearly $400 million in aid to Ukraine. It was not clear from the summary whether Zelenskiy was aware of that, and the White House did not respond to requests to clarify. The president has insisted he did nothing wrong and has denied that any request for help was tied to the aid freeze.

The release of the rough transcript sets the parameters of the political debate to come. Trump, at the U.N. on Wednesday, dismissed it and said as he often does that’s he’s the victim of “the single greatest witch hunt in American history.” Democrats say it lays the groundwork for the congressional impeachment inquiry.

Trump aides believed that his oblique, message-by-suggestion style of speaking would not lend itself to the discovery of a “smoking gun” in Wednesday’s summary. His previous messages to his staff were at the center of special counsel Robert Mueller’s investigation into obstruction of justice in the Trump-Russia case.

Trump is direct in raising the question of Joe and Hunter Biden and a Ukrainian prosecutor: “There’s a lot of talk about Biden’s son, that Biden stopped the prosecution and a lot of people want to find out about that.”

In the conversation, Trump doesn’t distinguish between the roles of Giuliani, his personal attorney and political ally, and Barr, who as the nation’s top law enforcement officer is supposed to be above the political fray. Barr has been a staunch defender of Trump, most notably during the Mueller investigation.

It’s not the first time Trump has sought foreign assistance to undermine a political rival. He publicly asked Russia to find missing Hillary Clinton emails in 2016, but this is his first documented time doing so while president with the weight of the U.S. government at his disposal.

The White House did not say whether there are any records of Giuliani’s communications with Zelenskiy, nor did it address whether the president’s personal attorney learned anything from them. The White House has also not commented on whether Trump discussed Biden on an April 21 call with the Ukrainian leader or with any other foreign power.

The president took the 30-minute call from the White House residence, while officials in the Situation Room listened in and worked to keep a record of the conversation, as is standard practice. They used voice recognition software, but the call was not recorded. Trump ordered the document declassified Tuesday.

The release came against the backdrop of the president presiding over a meeting of world leaders at the United Nations, a remarkable split screen even for the turbulence of the Trump era.

The inspector general for the intelligence community wrote to the acting Director of National Intelligence in August that he believed the conversation between Trump and Ukraine’s leader could have been a federal campaign finance violation because the president could have been soliciting a campaign contribution from a foreign government, a Justice Department official said.

The whistleblower — a member of the intelligence community — said in their complaint that they had heard the information from “White House officials,” but did not have firsthand knowledge of the call, the Justice Department official said.

Prosecutors from the department reviewed a transcript of the call and determined the president did not violate campaign finance law. The determination was made based on the elements of the allegation, and there was no consideration of the department’s policy that a sitting president cannot be indicted, the official said.

The official spoke on condition of anonymity in order to discuss internal investigative deliberations.

Justice Department spokeswoman Kerri Kupec said the attorney general was first notified of Trump’s conversation with the Ukrainian president “several weeks after the call took place,” when the department received the referral about potential criminal conduct.

Trump has sought to implicate Biden and his son in the kind of corruption that has long plagued Ukraine. Hunter Biden served on the board of a Ukrainian gas company at the same time his father was leading the Obama administration’s diplomatic dealings with Kyiv. Though the timing raised concerns among anti-corruption advocates, there has been no evidence of wrongdoing by either the former vice president or his son.

Lawmakers have been demanding details of the whistleblower’s complaint, but the acting director of national intelligence, Joseph Maguire, has refused to share that information, citing presidential privilege. He is to testify Thursday before the House, and lawmakers are expected to have access to details of the complaint beforehand in a classified setting.

The complaint has set off a stunning turn of American political events, leading Pelosi to yield to mounting pressure from fellow Democrats on the impeachment inquiry.

Trump, who thrives on combat, has all but dared Democrats to take this step, confident that the specter of impeachment led by the opposition party will bolster rather than diminish his political support.