WASHINGTON (AP) — House Speaker Nancy Pelosi launched a formal impeachment inquiry against President Donald Trump on Tuesday, acquiescing to mounting pressure from fellow Democrats and plunging a deeply divided nation into an election year clash between Congress and the commander in chief.

The probe centers on whether Trump abused his presidential powers and sought help from a foreign government to undermine Democratic foe Joe Biden and help his own reelection. Pelosi said such actions would mark a “betrayal of his oath of office” and declared: “No one is above the law.”

Pelosi’s brief statement, historic yet presented without dramatic flourish, capped a frenetic stretch on Capitol Hill as details of a classified whistleblower complaint about Trump have burst into the open and momentum has shifted swiftly toward an impeachment probe. The charge was led by several moderate Democratic lawmakers from political swing districts , many of them with national security backgrounds and serving in Congress for the first time.

After more than two and one-half years of sharp Democratic criticism of Trump, the formal impeachment quest sets up the party’s most urgent and consequential confrontation with a president who thrives on combat — and injects deep uncertainty in the 2020 White House race. Trump has all but dared Democrats to take this step, confident that the specter of impeachment led by the opposition party would bolster his political support

Trump, who was meeting with world leaders at the United Nations, previewed his defense in an all-caps tweet: “PRESIDENTIAL HARRASSMENT!”

Pelosi had barely finished speaking as he began a mini-blizzard of tweets assailing her announcement. 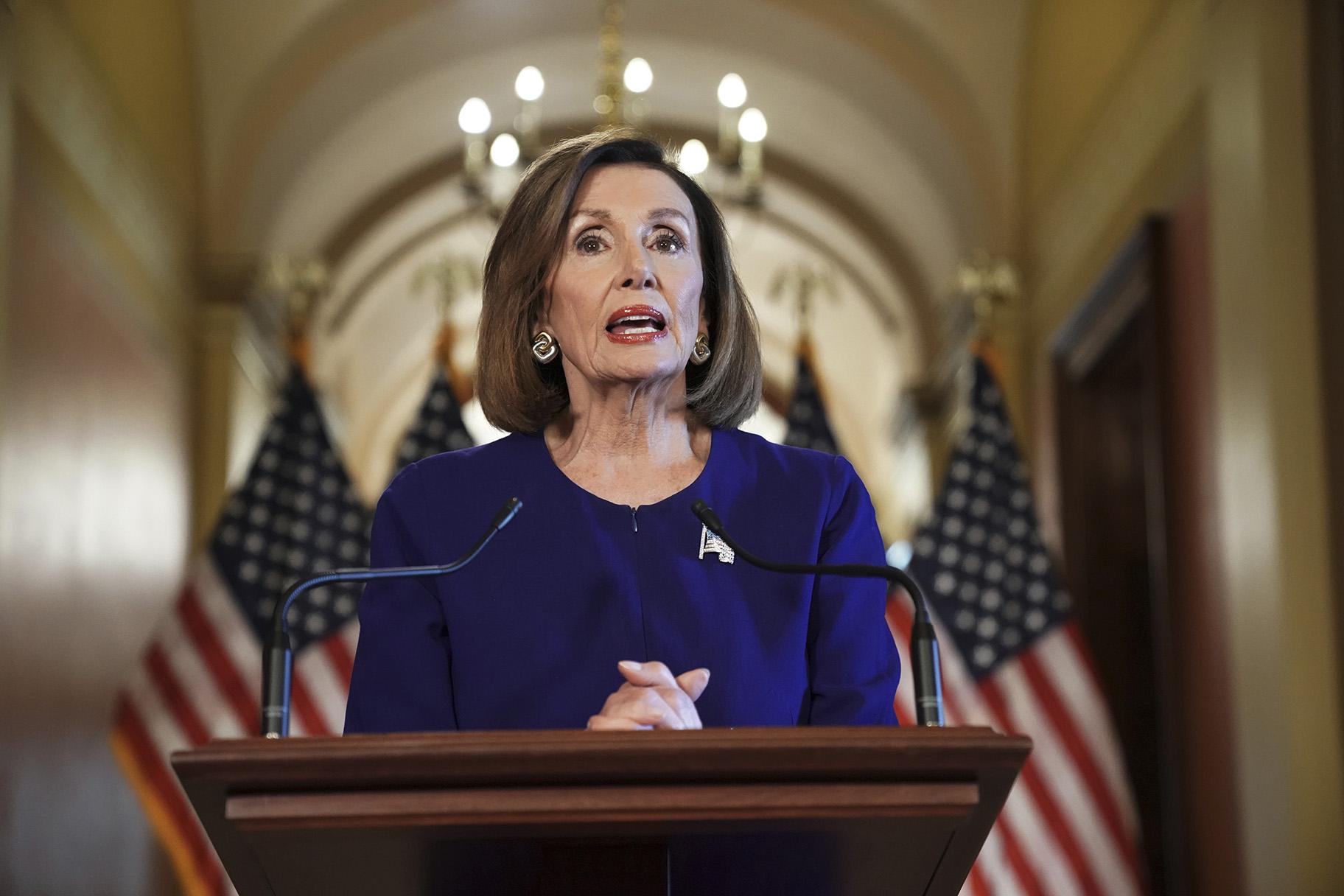 At issue are Trump’s actions with Ukraine. In a summer phone call with Ukrainian President Volodymyr Zelenskiy , he is said to have asked for help investigating former Vice President Biden and his son Hunter. In the days before the call, Trump ordered advisers to freeze $400 million in military aid for Ukraine — prompting speculation that he was holding out the money as leverage for information on the Bidens. Trump has denied that charge, but acknowledged he blocked the funds, later released.

Biden said Tuesday, before Pelosi’s announcement, that if Trump doesn’t cooperate with lawmakers’ demands for documents and testimony in its investigations the president “will leave Congress ... with no choice but to initiate impeachment.” He said that would be a tragedy of Trump’s “own making.”

The Trump-Ukraine phone call is part of the whistleblower’s complaint, though the administration has blocked Congress from getting other details of the report, citing presidential privilege. Trump has authorized the release of a transcript of the call, which is to be made public on Wednesday.

“You will see it was a very friendly and totally appropriate call,” Trump said.

Trump has sought to implicate Biden and his son in the kind of corruption that has long plagued Ukraine. Hunter Biden served on the board of a Ukrainian gas company at the same time his father was leading the Obama administration’s diplomatic dealings with Kyiv. Though the timing raised concerns among anti-corruption advocates, there has been no evidence of wrongdoing by either the former vice president or his son.

While the specter of impeachment has hung over Trump for many months, the likelihood of a probe had faded after special counsel Robert Mueller’s investigation ended without a clear directive for lawmakers. Democratic House committees launched new inquiries into Trump’s businesses and a variety of administration scandals, but all seemed likely to drag on for months.

But details of Trump’s dealings with Ukraine prompted Democrats to quickly shift course. By the time Pelosi addressed the nation on Tuesday, about two-thirds of House Democrats had announced moving toward impeachment probes.

The president has all but dared Democrats to take this step, repeatedly stonewalling requests for documents and witness interviews in the variety of ongoing investigations. Trump advisers say they are confident that an impeachment process led by the opposition party will bolster his political support heading into his reelection campaign.

After Pelosi’s Tuesday announcement, the president and his campaign team quickly released a series of tweets attacking Democrats, including a video of presidential critics like the speaker and Rep. Ilhan Omar discussing impeachment. It concluded with a message for the Trump faithful: “While Democrats ‘Sole Focus’ is fighting Trump, President Trump is fighting for you.”

Pelosi has for months resisted calls for impeachment from her restive caucus, warning that it would backfire against the party unless there was a groundswell of public support. That groundswell hasn’t occurred, but Pelosi suggested in comments earlier Tuesday that this new episode — examining whether a president abused his power for personal political gain — would be easier to explain to Americans than some of the issues that arose during the Mueller investigation and other congressional probes.

The speaker put the matter in stark terms on Tuesday: “The actions of the Trump presidency revealed dishonorable facts of the president’s betrayal of his oath of office, betrayal of his national security and betrayal of the integrity of our elections.”

All of the Chicago area’s Democratic congressional delegation now supports some form of impeachment proceedings.

Sen. Dick Durbin, the highest-ranking member and number two Democrat, tweeted: “Today, I am calling for the initiation of a formal impeachment inquiry by the House of Representatives of President Donald Trump.

“The refusal of the President and Attorney General to release the whistleblower report as required by law has also convinced me that an impeachment inquiry is the only course we can follow under our Constitution to make certain the American people know the facts.”

“The House of Representatives should use its constitutional authorities to investigate this cover up and swiftly decide if impeachment is warranted.”

Meanwhile, the most conservative member of the delegation – Southwest Side U.S. Rep. Dan Lipinski – had been a holdout but appeared to changed his tune Tuesday.

“If @POTUS conducted a quid pro quo such as this it would be an impeachable offense.  The whistleblower complaint deserves a full investigation. The Administration must not stand in the way,” Lipinski said.

“Impeachment is a serious charge and it is not something to be taken lightly. As the Congressman has said before, no foreign government should have an influence on our election, no matter what – nor should an American president utilize the power of this country to affect an election. It is deeply concerning to see Democrats jump ahead of the facts to satiate their desire for impeachment proceedings to begin.”

Kinzinger goes on to say that he’ll reserve judgement until the transcript of the phone call purportedly in question comes to light.