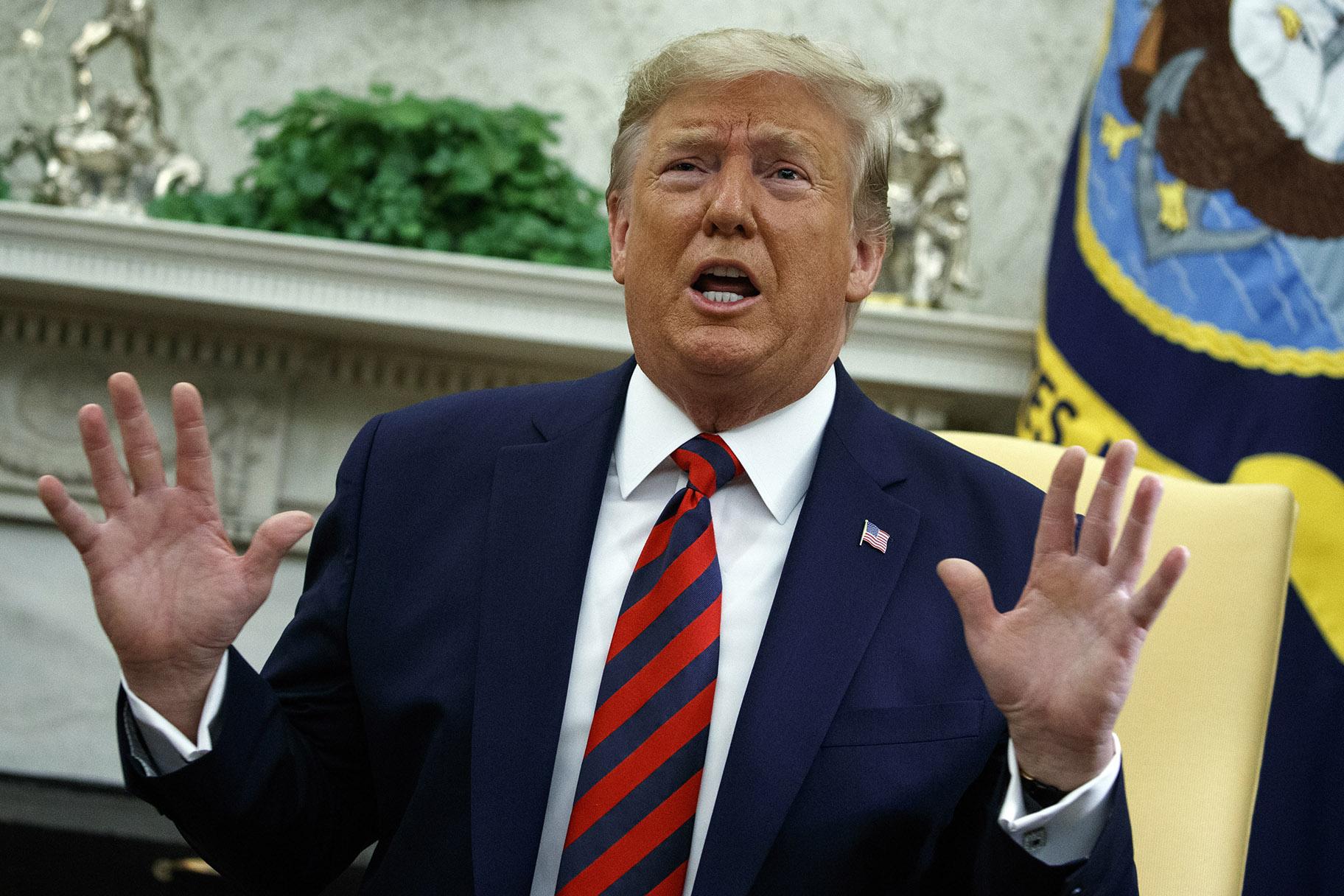 WASHINGTON (AP) — President Donald Trump irritably defended himself Friday against an intelligence whistleblower’s potentially explosive complaint, including an allegation of wrongdoing in a reported private conversation Trump had with a foreign leader.

The complaint, which the administration has refused to let Congress see, remains shrouded in mystery but is “serious” and “urgent,” the government’s intelligence watchdog said. But Trump dismissed the matter, insisting he did nothing wrong.

He declared Friday that the complaint was made by a “partisan whistleblower,” though he later said he did not know the identity of the person. He chided reporters for asking about it and said it was “just another political hack job.”

Some of the whistleblower’s allegations appear to center on Ukraine, according to a person familiar with the matter. The person was not authorized to discuss the issue by name and was granted anonymity.

Trump, who sat in the Oval Office with Australian Prime Minister Scott Morrison, whom he was hosting for a state visit, was asked if he knew if the whistleblower’s complaint centered on a July 25 phone call with Ukrainian president Volodymyr Zelensky. The president responded “I really don’t know” but continued to insist any phone call he made with a head of state was “perfectly fine and respectful.”

The standoff raises fresh questions about the extent to which Trump’s appointees are protecting the Republican president from oversight and, specifically, whether his new acting director of national intelligence, Joseph Maguire, is working with the Justice Department to shield the president from the reach of Congress.

It also plunged the Trump administration into an extraordinary showdown with Congress over access to the whistleblower’s Aug. 12 complaint as lawmakers press their oversight of the executive branch.

The administration has kept Congress from even learning what exactly the whistleblower is alleging, but the intelligence community’s inspector general said the matter involves the “most significant” responsibilities of intelligence leadership. A lawmaker said the complaint was “based on a series of events.”

The inspector general appeared before the House intelligence committee behind closed doors Thursday but declined, under administration orders, to reveal to members the substance of the complaint.

The chairman of the House committee said Trump’s attack on the whistleblower was “disturbing.” Rep. Adam Schiff, D-Calif., told reporters it’s also “deeply disturbing” that the White House appears to know more about the whistleblower’s complaint than its intended recipient -- Congress.

The information “deserves a thorough investigation,” Schiff said. “Come hell or high water, that’s what we’re going to do.”

Schiff, who said he was prepared to go to court to force the administration to open up about the complaint, said he was worried the president’s actions will have a chilling effect on other whistleblowers.

House Democrats are fighting the administration separately for access to witnesses and documents in impeachment probes. Democrats are also looking into whether Trump lawyer Rudy Giuliani traveled to Ukraine to pressure the government to aid the president’s reelection effort by investigating the activities of potential rival Joe Biden’s son Hunter, who worked for a Ukrainian gas company.

Trump was asked Friday if be brought up Biden in the call with Zelensky, and he answered, “It doesn’t matter what I discussed.” But then he used the moment to urge the media “to look into” Biden’s background with Ukraine.

During a rambling interview Thursday on CNN, Giuliani was asked whether he had asked Ukraine to look into Biden. Giuliani initially said, “No, actually I didn’t,” but seconds later he said, “Of course I did.”

Giuliani has spent months trying to drum up potentially damaging evidence about Biden’s ties to Ukraine. He told CNN that Trump was unaware of his actions.

“I did what I did on my own,” Giuliani said. “I told him about it afterward.

Later, Giuliani tweeted, “A President telling a Pres-elect of a well known corrupt country he better investigate corruption that affects US is doing his job.” Giuliani’s efforts have sparked anger among Democrats who have claimed that Trump, in the aftermath of special counsel Robert Mueller’s Russia investigation, may have asked for foreign assistance in his upcoming reelection bid.

Among the materials Democrats have sought is a transcript of Trump’s July 25 call with Zelensky. The call took place one day after Mueller’s faltering testimony to Congress effectively ended the threat his probe posed to the White House.

Schiff said he, too, could not confirm whether newspaper reports were accurate because the administration was claiming executive privilege in withholding the complaint. But letters from the inspector general to the committee released Thursday said it was an “urgent” matter of “serious or flagrant abuse” that must be shared with lawmakers.

The letters also made it clear that Maguire consulted with the Justice Department in deciding not to transmit the complaint to Congress in a further departure from standard procedure. It’s unclear whether the White House was also involved, Schiff said.

Trump named Maguire, a former Navy official, as acting intelligence director last month, after the departure of Director Dan Coats, a former Republican senator who often clashed with the president, and the retirement of Sue Gordon, a career professional in the No. 2 position.

Maguire has refused to discuss details of the whistleblower complaint, but he has been subpoenaed by the House panel and is expected to testify publicly next Thursday. Maguire and the inspector general, Michael Atkinson, also are expected next week at the Senate intelligence committee.

Atkinson wrote in letters that Schiff released that he and Maguire had hit an “impasse” over the acting director’s decision not to share the complaint with Congress. Atkinson said he was told by the legal counsel for the intelligence director that the complaint did not actually meet the definition of an “urgent concern.” And he said the Justice Department said it did not fall under the director’s jurisdiction because it did not involve an intelligence professional.

Atkinson said he disagreed with that Justice Department view. The complaint “not only falls under DNI’s jurisdiction,” Atkinson wrote, “but relates to one of the most significant and important of DNI’s responsibilities to the American people.”

The inspector general said he requested authorization to at the very least disclose the “general subject matter” to the committee but had not been allowed to do so. 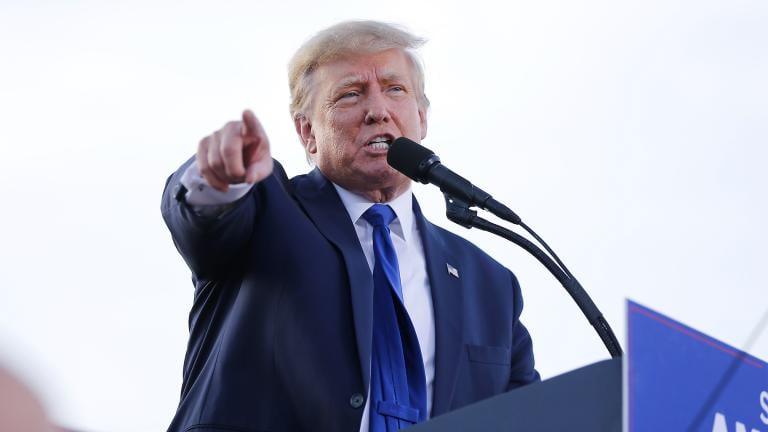