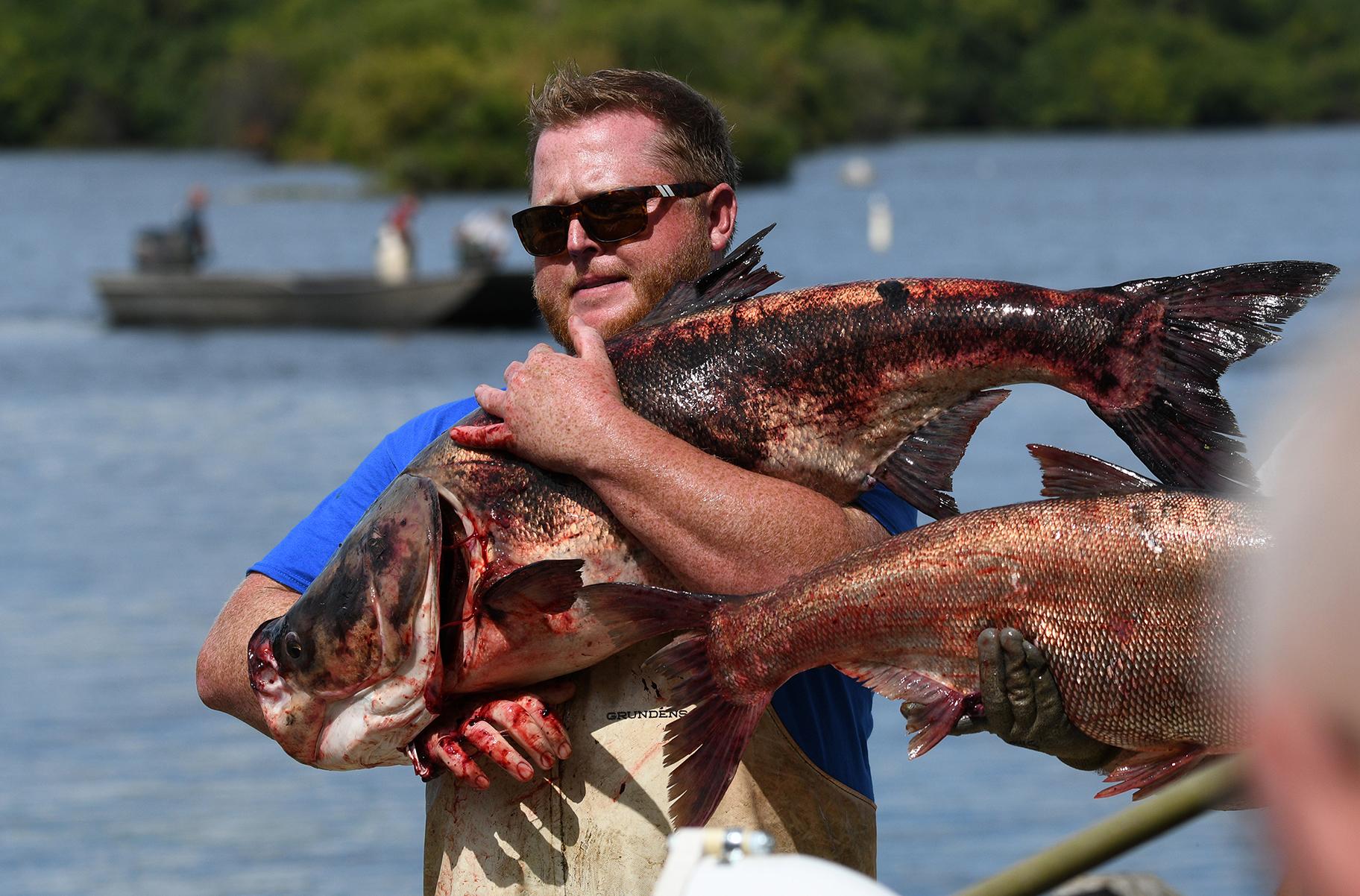 A man in waterproof overalls hits a wooden stick on the base of a small boat, again and again, with about a second between each strike. It sounds like a ticking clock, only louder.

At the same time, the driver repeatedly revs the boat’s engine while steering in half-circles, making sure to cover the entire 100-yard section where crews have dropped netting into the water.

This is how Illinois conservation officials frighten Asian carp, which prompts them to rise to the surface of the water where they can be caught. It’s a key step in the coordinated fight to prevent the non-native fish species from invading the Great Lakes, a move experts say would have a devastating effect on the marine food chain and the region’s $7 billion fishing industry.

The routine occurs every couple of weeks on a small lake at the Rock Run Rookery Preserve in Joliet, a former quarry connected to the Des Plaines River and one of the northernmost spots where the fish have been detected in the Illinois Waterway system. 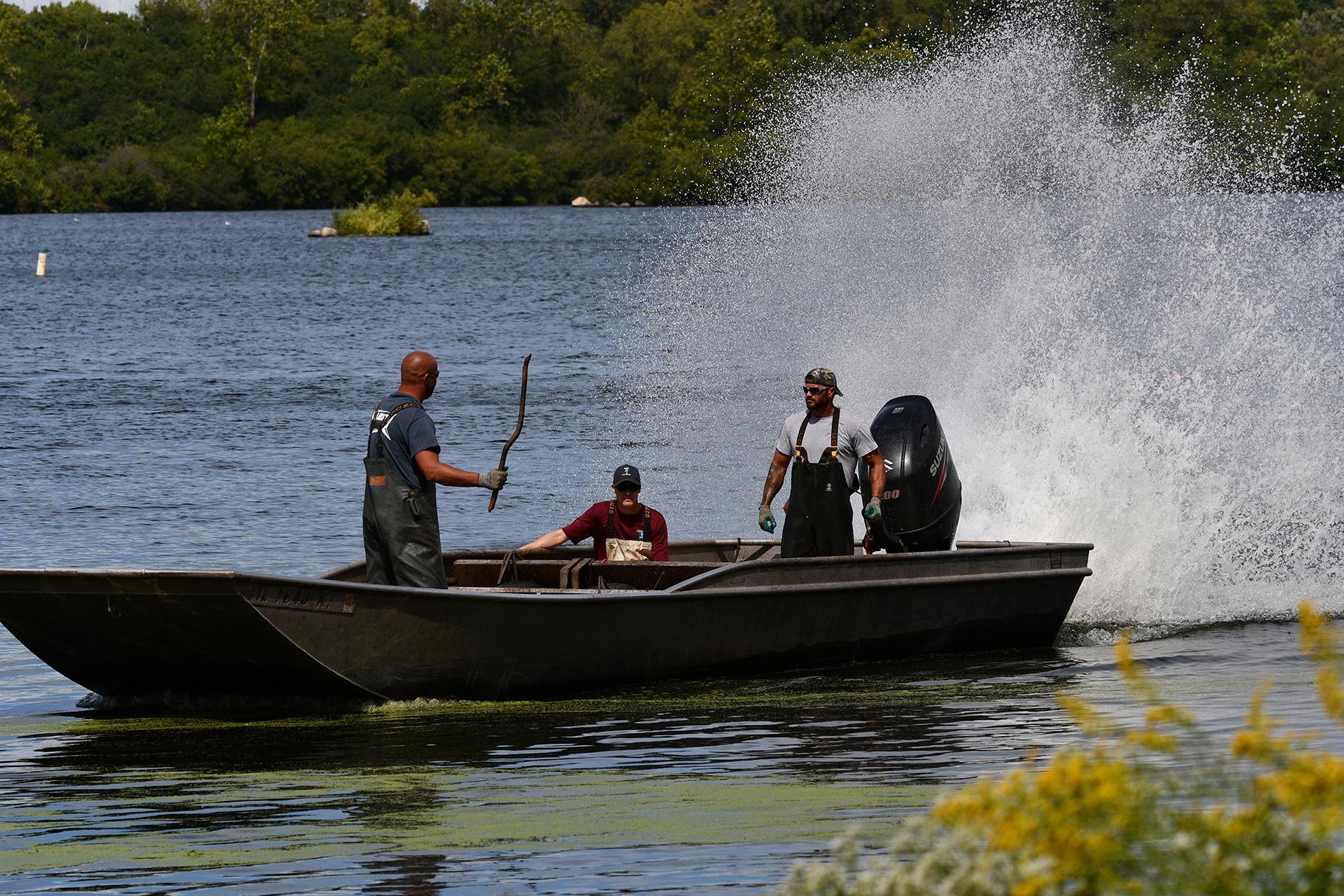 The site is just 6 miles downstream from the Brandon Road Lock and Dam, a vital choke point designed to prevent the fish from migrating from the Illinois River to Lake Michigan.

Rock Run is a popular spot for Asian carp because it is a rich source of plankton, said Kevin Irons, aquaculture and aquatic nuisance species program manager with the Illinois Department of Natural Resources.

“It’s kind of a trap or a hot spot,” he said. “We can get in there and catch and remove fish.”

Since 2013, IDNR has hired commercial fishers to catch Asian carp from late February through mid-December.

Every few weeks at about 8 a.m., crews set up at Rock Run and a handful of other points along the Illinois River, from the Dresden Pool near Joliet south to Starved Rock State Park. One boat at each location provides the noise, while crews on a second boat lift up the net to haul in the fish. Any native fish caught are thrown back into the water. 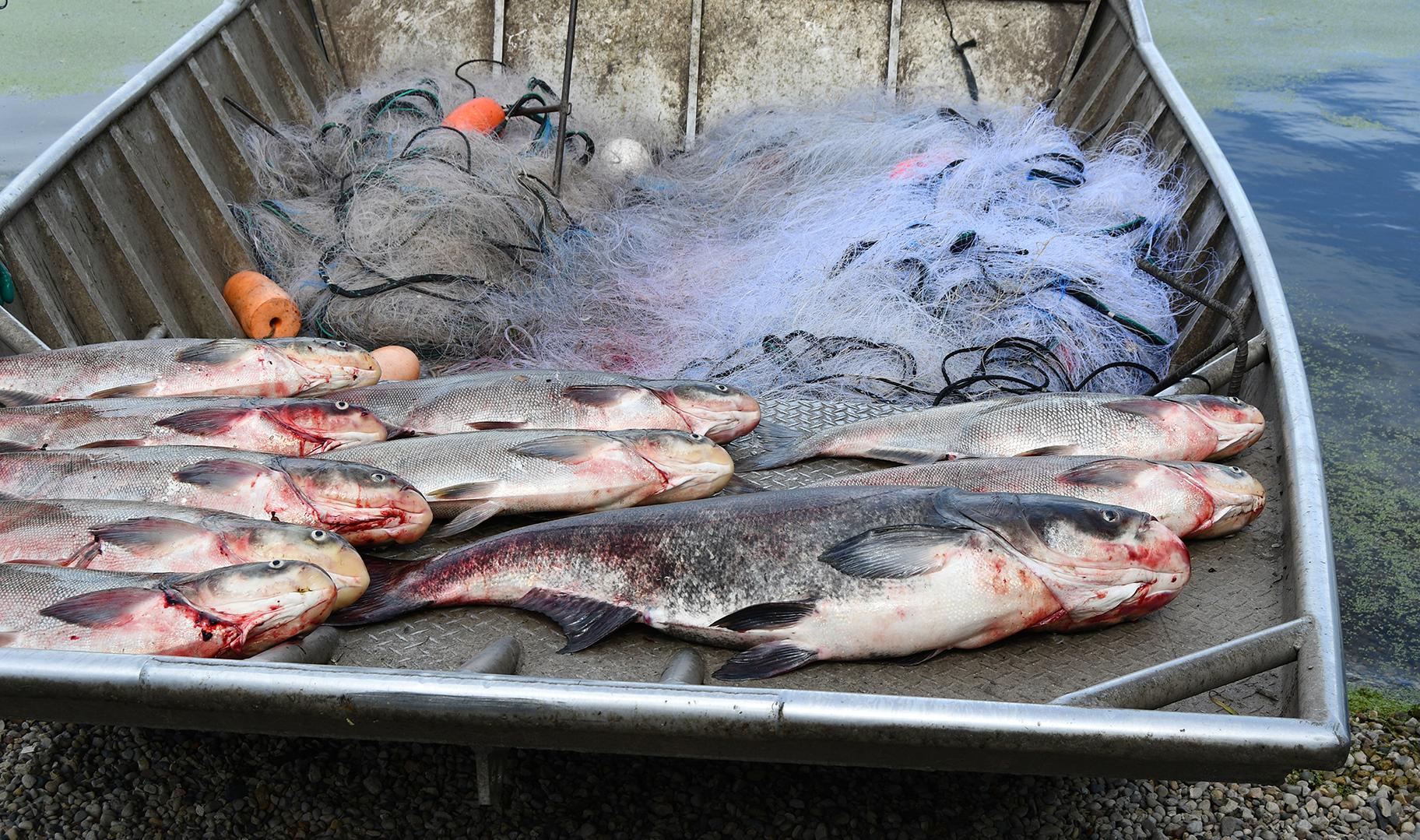 On Friday, the morning run at Rock Run produced one bighead carp and eight silver head carp, both types of Asian carp. In the afternoon, IDNR crews performed another harvest as part of a demonstration for nearly 50 lawmakers assembled in Chicago for the annual meeting of the Great Lakes-St. Lawrence Legislative Caucus. The nonprofit organization focuses on policies to protect the Great Lakes.

Harvesting efforts have led to a significant reduction in the number of Asian carp caught in Rock Run’s 84-acre lake. Crews used to catch as many as 1,000 fish in a single day, but now the haul is usually in the single digits.

IDNR estimates that 96% of Asian carp in the area near the Dresden Island Lock and Dam have been caught.

Asian carp caught downstream are often refrigerated and used as food for human consumption. Invasive fish caught at Rock Run are usually not refrigerated, but they can still be used in liquid fertilizer, fish meal, fish oil, fish bait and even dog treats.

Irons said crews leave some of the Asian carp in the water, tagging them with radio transmitters to track their movement.

“They’ll stay here quite a long time,” he said. “But if they leave, most of them go south.”

Friday’s harvest was observed by legislators from seven U.S. states – Illinois, Indiana, Wisconsin, Michigan, Minnesota, Ohio and Pennsylvania – and the Canadian provinces of Quebec and Ontario.

The lawmakers’ visit comes as the U.S. Army Corps of Engineers prepares to execute a $778 million project to reinforce the barriers at the Brandon Road Lock and Dam near Joliet. Congress must now decide whether to authorize the project and related funding.

In addition to fortifying the lock, Asian carp harvesting programs like the one at Rock Run are key to controlling the spread of the species. The fewer fish that make their way past Rock Run, the lower the chances they will be able to reach the Great Lakes.

“That’s why we’re putting so much effort into this,” Irons said.