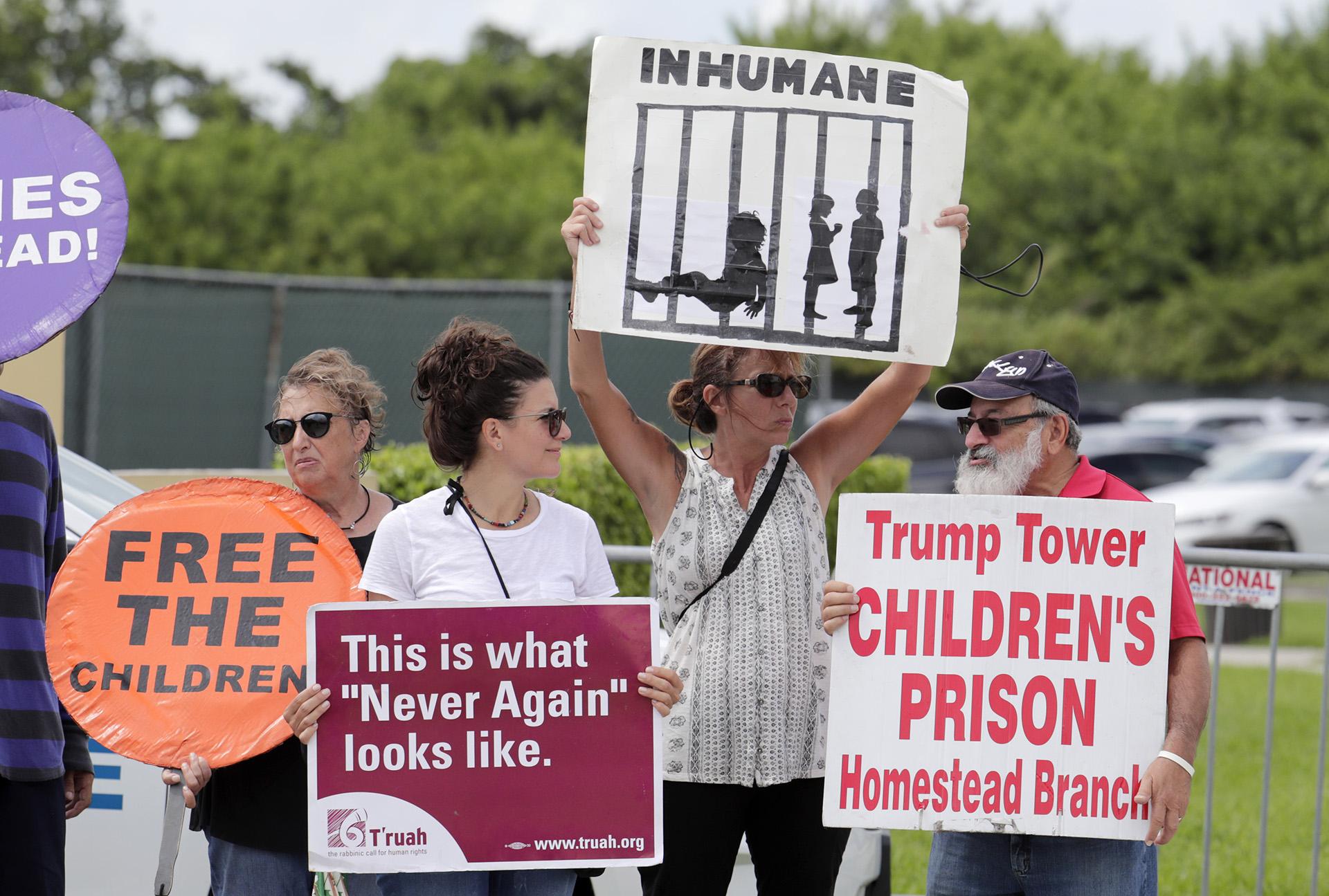 In this July 15, 2019, file photo, protesters hold signs outside of the Homestead Temporary Shelter for Unaccompanied Children while members of Congress tour the facility in Homestead, Florida. (AP Photo / Lynne Sladky, File)

WASHINGTON (AP) — The Trump administration is moving to end an agreement limiting how long migrant children can be kept in detention, the president’s latest effort to curb immigration at the Mexican border.

A court fight is almost certain to follow, challenging the attempt to hold migrant families until asylum cases are decided.

A current settlement overseen by the federal courts now requires the government to keep children in the least restrictive setting and to release them as quickly as possible, generally after 20 days in detention.

Homeland Security officials say they are adopting their own regulations that reflect the “Flores agreement,” which has been in effect since 1997. They say there is no longer a need for the court involvement, which was only meant to be temporary. But the new rules would allow the government to hold families in detention much longer than 20 days.

Tightening immigration is a signature issue for President Donald Trump, aimed at restricting the movement of asylum seekers in the country and deterring more migrants from crossing the border.

Trump defended it, saying, “I’m the one that kept the families together.”

The Mexican government expressed concern over the prospect of prolonged detention of migrant children in the U.S. In a statement from the Foreign Relations Department, Mexico said it would monitor conditions at U.S. detention centers and continue to offer consular services to any Mexican families that may be held under the new conditions. It also said that it would keep an eye on possible court challenges and that “the appropriate legal alternatives will be evaluated.”

“The administration is seeking to codify child abuse, plain and simple,” House Speaker Nancy Pelosi, D-Calif., said in a statement.

Peter Schey, a lawyer for the immigrant children in the Flores case and president of the Center for Human Rights and Constitutional Law, said if the regulations don’t match the settlement in that case, “they would be in immediate material breach, if not contempt of court.”

“I think all these things are now part of the 2020 campaign,” Schey said.

The regulations are expected to be formally published Friday and go into effect in 60 days absent legal challenges.

Holly Cooper, co-director of the immigration law clinic at University of California, Davis and a lawyer in the Flores case, said attorneys haven’t seen the final rule and will have a week to brief a federal judge, who will weigh whether they are consistent with the settlement.

The government’s proposed rule, she said, wouldn’t have let lawyers monitor conditions in border facilities and would have dramatically changed how long children could be detained and the standards for their care.

“We’re going to have a world that looks a lot like the internment of families and children, where we have basically regularized prison as a default for families seeking political asylum in this country,” she told reporters.

The rule follows moves last week to broaden the definition of a “public charge” to include immigrants on public assistance, potentially denying green cards to more immigrants. There was also a recent effort to effectively end asylum altogether at the southern border.

There has been a drastic increase in the number of families crossing the border — about 475,000 so far this budget year, nearly three times the previous full-year record for families. Most are released into the U.S. while their asylum requests wind through the courts — a practice Trump has derided as “catch-and-release.”

The Flores agreement has been in effect since 1997 but mostly was applied to children who came to the country alone. In 2015, U.S. District Court Judge Dolly Gee ruled the requirements were applicable to children who crossed the border with families, after the Obama administration built family detention centers and started detaining families until their cases were completed.

Homeland Security did not say how long it expects families to be kept, but McAleenan said under the previous administration it was about 50 days.

He said, “The intent is for a fair and expeditious proceeding.”

Asylum cases involving detained families move much more quickly than cases for families released, taking months instead of years to resolve, in part because there are none of the delays that result when immigrants fail to show up for hearings.

The government operates three family detention centers that can hold a total of about 3,000 people. One is being used for single adults, and the other two are at capacity.

McAleenan said he didn’t expect to need more bed space because, together with other efforts to restrict the flow of migrants, he expects fewer people to be coming.

Immigrant advocates, in contrast, said they believed the change would put many more immigrants into detained court proceedings, slowing the process and keeping children locked up for longer.

“This is unnecessarily cruel and frankly evil,” Jess Morales Rocketto, chair of Families Belong Together, told reporters. “The idea that this administration and its agencies can be trusted to do self-regulation and follow the rules is completely ridiculous.”

The massive influx of Central American families to the U.S.-Mexico border has greatly strained the system and foiled Trump’s tough talk on immigration, though agreements by Mexico to clamp down on migrants and a new agreement with Guatemala forcing migrants to claim asylum there instead of heading north are expected to reduce the flow.

Trump administration officials have also forced more than 30,000 people to wait out their asylum cases in Mexico. It’s not clear how this change would affect that policy.

The Flores agreement sets standards of care for children who cross the border alone as well as with families. Lawyers in the case recently spoke out about what they said were deplorable, filthy conditions for children held at border facilities not meant to hold large groups of people for very long.

A report this week by the independent monitor overseeing claims of government noncompliance with Flores rules detailed the extreme overcrowding and poor conditions that immigrant youths faced in detention.

For example, a Border Patrol station in in Clint, Texas, an El Paso suburb, had a stated capacity for 105 children. On June 1, there were 676. Lawyers who visited in June described squalid conditions. Children cared for toddlers, the lawyers said, with inadequate food, water and sanitation.

A federal appeals panel found last week that detained children should get edible food, clean water, soap and toothpaste under the agreement, after a bid to limit what must be provided.