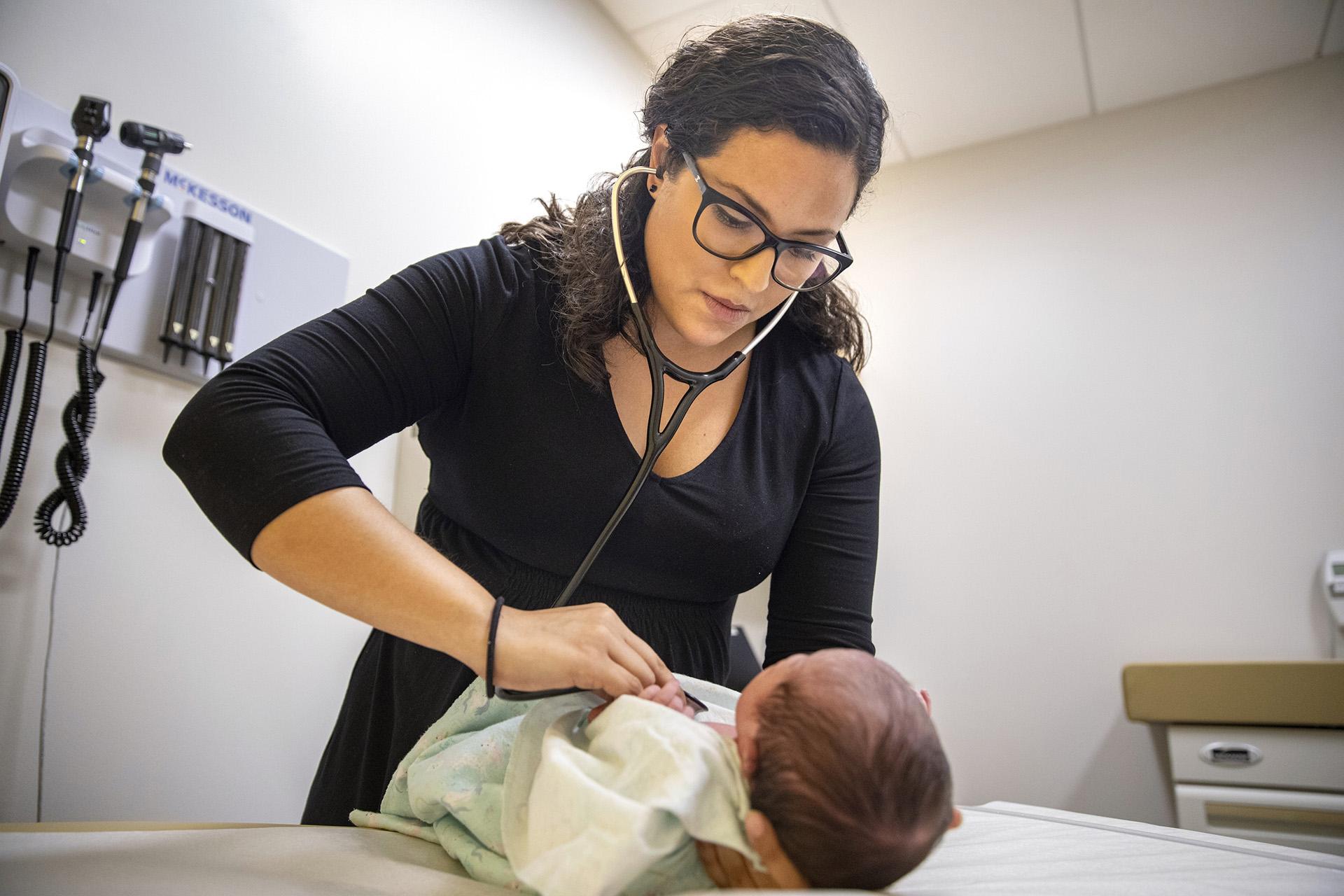 In this Tuesday, Aug. 13, 2019, photo, Dr. Jasmine Saavedra, a pediatrician at Esperanza Health Centers whose parents emigrated from Mexico in the 1980s, examines Alondra Marquez, a newborn baby in her clinic in Chicago. (AP Photo / Amr Alfiky)

Doctors and public health experts warn of poor health and rising costs they say will come from sweeping Trump administration changes that would deny green cards to many immigrants who use Medicaid, as well as food stamps and other forms of public assistance. Some advocates say they’re already seeing the fallout even before the complex 837-page rule takes effect in October.

President Donald Trump’s administration trumpeted its aggressive approach this past week as a way to keep only self-sufficient immigrants in the country, but health experts argue it could force potentially millions of low-income migrants to choose between needed services and their bid to stay legally in the U.S.

“People are going to be sicker. They’re not going to go get health care, or not until they have to go to an emergency room,” said Lisa David, president and CEO of Public Health Solutions, New York’s largest public health organization. “It’s going to cost the system a lot of money.”

Immigrants who want permanent legal status, commonly called a green card, have long been required to prove they won’t be “a public charge.” The Trump administration announced Monday that would redefine the term to mean those who are “more likely than not” to receive public benefits over a certain period. U.S. Citizenship and Immigration Services will also now consider other factors, including income, education and English proficiency.

“We want to see people coming to this country who are self-sufficient,” said Ken Cuccinelli, the agency’s acting director. “That’s a core principle of the American dream. It’s deeply embedded in our history, and particularly our history related to legal immigration.”

There are signs that is already happening in cities including Chicago, Detroit and New York, immigrant advocates say.

Within hours of the announcement, a Minnesota immigration attorney said she received a flurry of calls from worried clients about whether to leave Medicaid. A Detroit nonprofit helping Latinos and immigrants with social services said its usually jam-packed lobby was empty the day after the rules were unveiled. New York’s largest public health organization, Public Health Solutions, which serves a large immigrant population, reported a 20% drop in food stamps enrollment since the rule was first proposed in the fall. 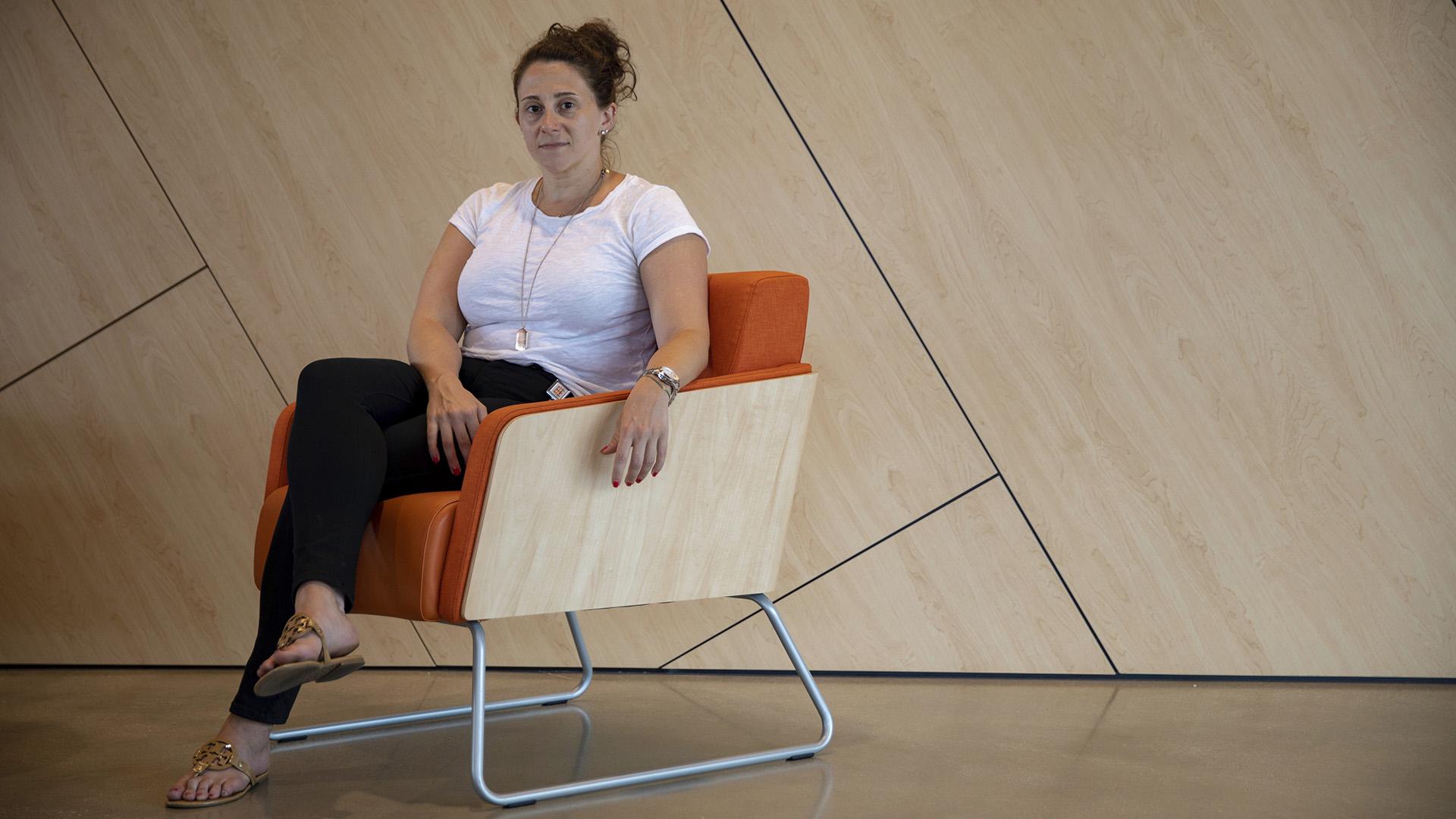 In this Aug. 13, 2019, photo, Jessica Boland, director of behavioral health at Esperanza Health Centers in Chicago, poses for a portrait. The centers, which run four Chicago-based clinics that serve low-income and largely immigrant populations, have seen an increase in the number of children who are uninsured. (AP Photo / Amr Alfiky)

There is precedent for such a chilling effect.

After 1996 welfare and immigration changes that limited public assistance for some immigrants, the use of benefits dropped steeply among U.S. citizen children and refugees, groups who were still eligible. Studies based on data following that change showed people disenrolled from Medicaid at rates ranging from 15% to 35%, according to Harvard University’s François-Bagnoud Center for Health and Human Rights. And, it found, this came at a high cost: Asthma-related school absences in 1996 led to $719 million in lost parental productivity.

Federico Mason, who emigrated from Mexico over two decades ago, said he is worried about the new criteria because he is low-income and doesn’t speak English well. The Chicago resident said he has no immediate plans to remove his 8- and 15-year-old sons, who are U.S. citizens, from Medicaid, but the new rule has made him more fearful about providing for his family and about applying for a green card.

“If one day I want to adjust my status, it will be more difficult because of these unfair policies that continue to discriminate against me,” he said in Spanish.

Overall, non-citizen low-income immigrants use public benefits at a much lower rate than low-income U.S.-born citizens, but there’s the possibility that millions of people could drop benefits out of fear or confusion. Estimates vary. It could be as high as 24 million people, according to the nonpartisan Fiscal Policy Institute, which includes in its count anyone in a family that has received food, health or housing support and where at least one person is a non-citizen.

She said non-citizen parents might hesitate to apply for their children who are U.S. citizens, mistakenly fearing that if their children get benefits it will destroy their own chances of getting a green card and tear their families apart. That will lead to people being unable to afford care for chronic diseases like asthma and diabetes, as well as preventative measures. Instead, they'll rely on far more costly emergency rooms.

“This has forced the immigrant families into an impossible choice,” Behrens said.

Roughly 544,000 people apply for green cards annually, with about 382,000 falling into categories that would be subject to the new review, according to the government. 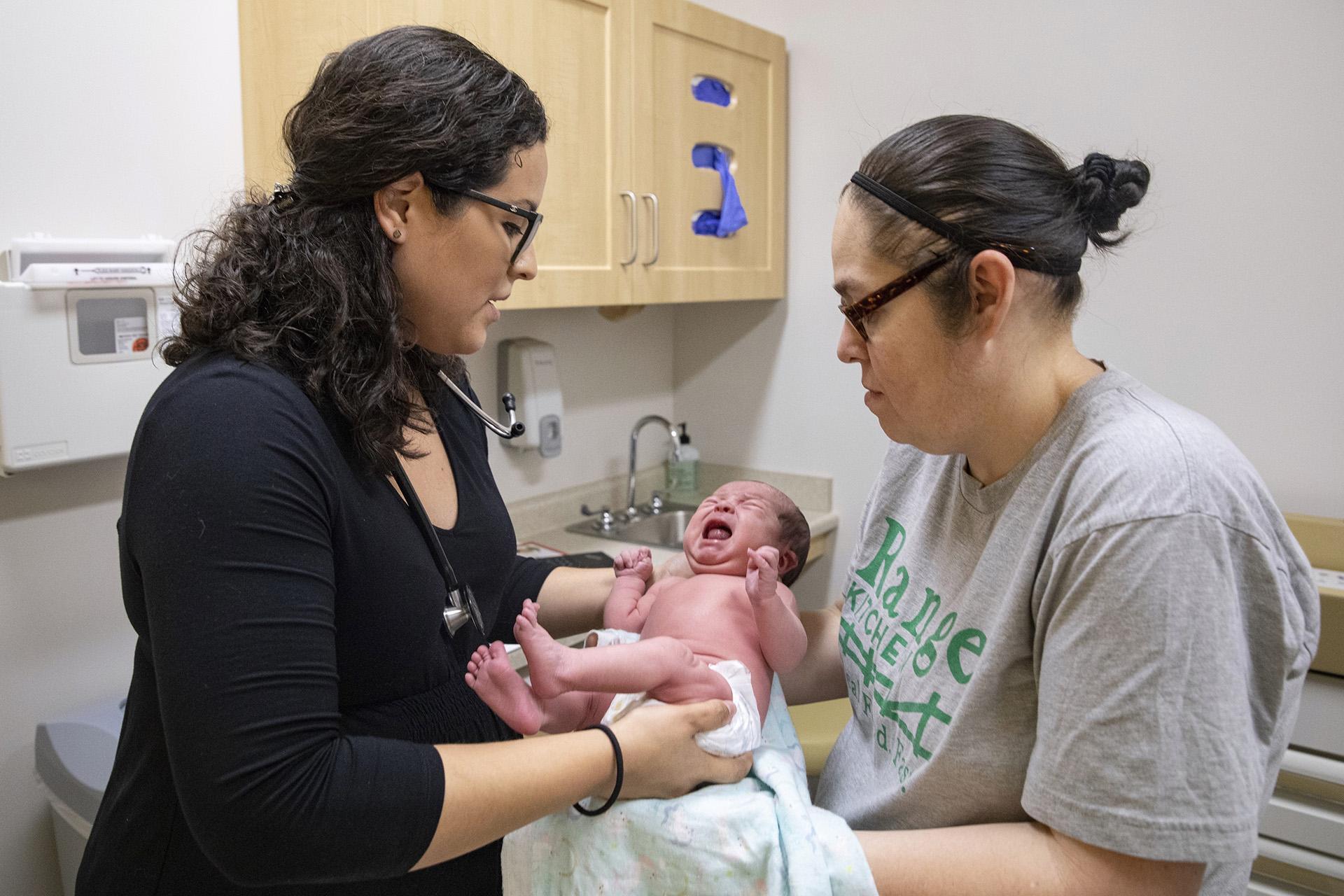 Esperanza Health Centers, which runs four Chicago-based clinics that serve low-income and largely immigrant populations, has seen an increase in the number of uninsured children. Since a draft of the new rule was released in the fall, the clinics report having 600 children without insurance, including those who have disenrolled from Medicaid. Typically, it’s about 200, according to Jessica Boland, director of behavioral health.

“We’re condemning people to having a much more unhealthy lifestyles because we believe that there is something awful about their request for what we think for most people is a right and not a privilege: health care,” said Dr. Kenneth Davis, president and CEO of Mount Sinai Health System, which covers eight hospitals in New York.

Over a dozen major patient groups, including the March of Dimes and the American Heart Association, have written fierce opposition to the rule.

The issue is personal for Dr. Jasmine Saavedra, a pediatrician who works at an Esperanza clinic in a heavily Latino Chicago neighborhood.

She is convinced that if new Trump administration criteria were in effect for her parents three decades ago, she would have had a far different future. Her parents emigrated from Mexico in the 1980s unable to speak English and with little education. While working low-wage jobs, they relied on food stamps for a short time to get by.

Her mother later quit public assistance because of the stigma, but Saavedra said there were days when her mother wouldn’t eat so her children could. She believes that helped her become a doctor and her two sisters become an accountant and a nurse.

“Maybe when certain people think about immigrant families, they do think of it as a burden on this country, the way people would tell my mom she was when she was receiving assistance,” Saavedra said. “But my parents, with no education, not speaking this language, being impoverished with a little bit assistance when they could, got us out and they have three successful daughters.”