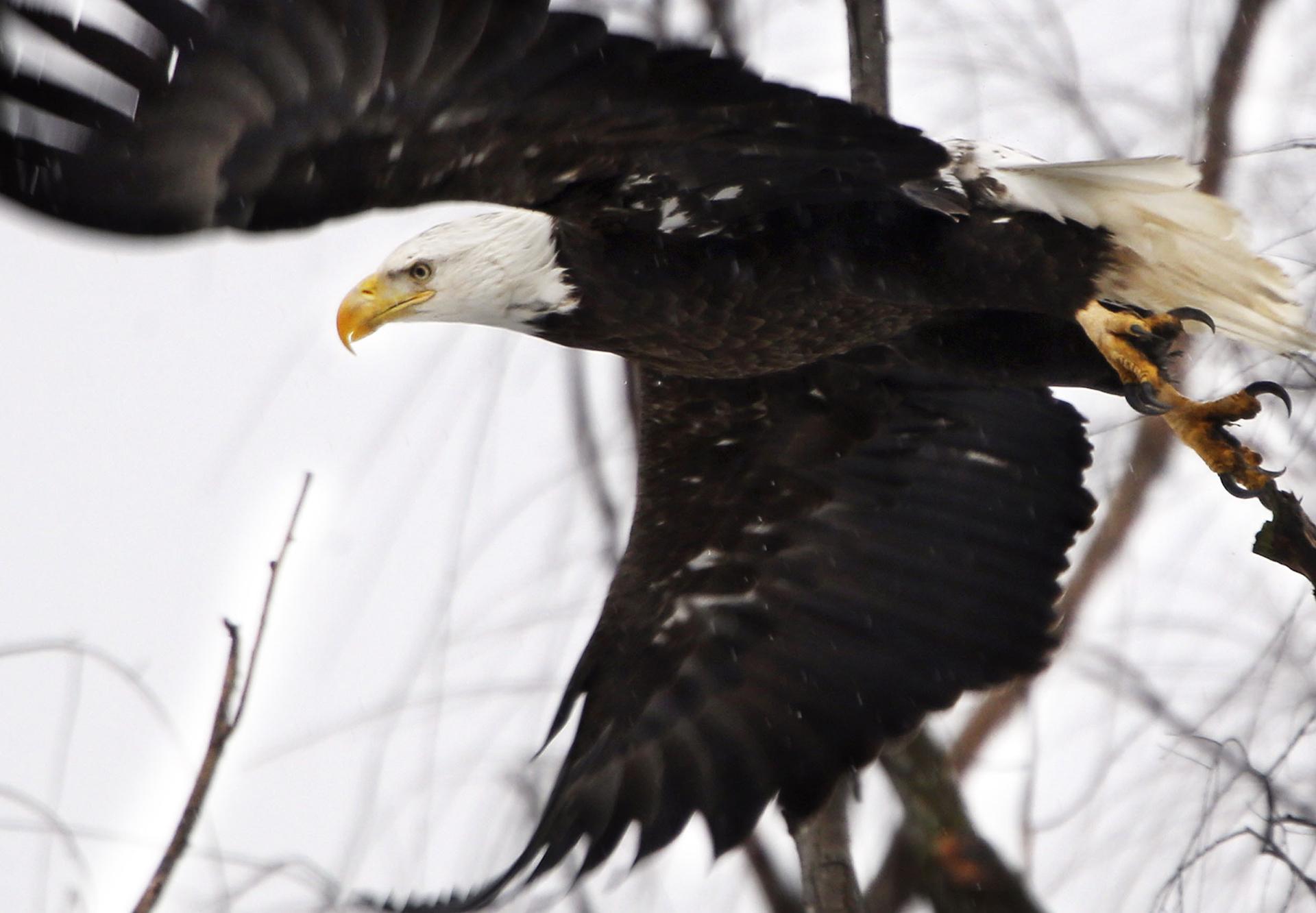 In this Feb. 1, 2016 file photo, a bald eagle takes flight at the Museum of the Shenandaoh Valley in Winchester, Virginia. (Scott Mason / The Winchester Star via AP, File)

WASHINGTON (AP) — The Trump administration moved on Monday to weaken how it applies the 45-year-old Endangered Species Act, ordering changes that critics said will speed the loss of animals and plants at a time of record global extinctions.

The action, which expands the administration’s rewrite of U.S. environmental laws, is the latest that targets protections, including for water, air and public lands. Two states — California and Massachusetts, frequent foes of President Donald Trump’s environmental rollbacks — promised lawsuits to try to block the changes in the law. So did some conservation groups.

Pushing back against the criticism, Interior Secretary David Bernhardt and other administration officials contend the changes improve efficiency of oversight while continuing to protect rare species.

“The best way to uphold the Endangered Species Act is to do everything we can to ensure it remains effective in achieving its ultimate goal — recovery of our rarest species,” he said in a statement. “An effectively administered Act ensures more resources can go where they will do the most good: on-the-ground conservation.”

Under the enforcement changes, officials for the first time will be able to publicly attach a cost to saving an animal or plant. Blanket protections for creatures newly listed as threatened will be removed. Among several other changes, the action could allow the government to disregard the possible impact of climate change, which conservation groups call a major and growing threat to wildlife.

Commerce Secretary Wilbur Ross said the revisions “fit squarely within the president’s mandate of easing the regulatory burden on the American public, without sacrificing our species’ protection and recovery goals."

The Endangered Species Act is credited with helping save the bald eagle, California condor and scores of other animals and plants from extinction since President Richard Nixon signed it into law in 1973. The act currently protects more than 1,600 species in the United States and its territories.

While the nearly half-century-old act has been overwhelmingly successful in saving animals and plants that are listed as endangered, battles over some of the listings have been yearslong and legendary. They have pitted northern spotted owls, snail darters and other creatures and their protectors against industries, local opponents and others in court and political fights. Republican lawmakers have pushed for years to change the law itself.

John Barrasso, a Wyoming Republican who leads the Senate Environment and Public Works Committee, said Monday’s changes in enforcement were “a good start” but he would continue working to change the act.

Previous Trump administration actions have proposed changes to other bedrock environmental laws — the clean water and clean air acts. The efforts include repeal of an Obama-era act meant to fight climate change by getting dirtier-burning coal-fired power plants out of the country’s electrical grid, rolling back tough Obama administration mileage standards for cars and light trucks, and lifting federal protections for millions of miles of waterways and wetlands.

Monday’s changes "”take a wrecking ball to one of our oldest and most effective environmental laws, the Endangered Species Act,” Sen. Tom Udall, a New Mexico Democrat, said in a statement. “As we have seen time and time again, no environmental protection - no matter how effective or popular - is safe from this administration.”

One of Monday’s changes includes allowing the federal government to raise in the decision-making process the possible economic cost of listing a species. That’s even though Congress has stipulated that economic costs not be a factor in deciding whether to protect an animal. The prohibition was meant to ensure that the logging industry, for example, would not be able to push to block protections for a forest-dwelling animal on economic grounds.

Gary Frazer, an assistant director at the U.S. Fish and Wildlife Service, told reporters that the government would adhere to that stipulation by disclosing the costs to the public without it being a factor for the officials as they consider the protections.

Price tag or no, Frazer said, federal officials would keep selecting and rejecting creatures from the endangered species list as Congress required, “solely on the basis of the best available scientific information and without consideration for the economic impacts.”

“Nothing in here in my view is a radical change for how we have been consulting and listing species for the last decade or so,” Frazer added.

But Brett Hartl, a government affairs director for the Center for Biological Diversity conservation group, contended any such price tag would be inflated, and “an invitation for political interference” in the decision whether to save a species.

“You have to be really naive and cynical and disingenuous to pretend” otherwise, Hartl said. “That’s the reason that Congress way back ... prohibited the Service from doing that,” he said. “It’s a science question: Is a species going extinct, yes or no?”

A United Nations report warned in May that more than 1 million plants and animals globally face extinction, some within decades, owing to human influence, climate change and other threats. The report called the rate of species loss a record.

In Washington state, Ray Entz, wildlife director for the Kalispel tribe, spoke of losing the struggle to save the last wild mountain caribou in the lower 48 states, despite the creature’s three decades on the Endangered Species List. With logging and other human activities and predators driving down the numbers of the south Selkirk caribou, Canadian officials captured and penned the last surviving members of the species over the winter for their protection.

“There were some tears shed,” Entz said, of the moment when tribal officials realized the animal had dwindled in the wild past the point of saving. “It was a tough pill to swallow.”

Despite the disappearance of the protected caribou species from the contiguous United States, Entz said, “We don’t want to see a weakening of the law.”

“There’s times where hope is something you don’t even want to talk about,” he said. But, “having the Endangered Species Act gives us the opportunity to participate in that recovery.”

In Idaho on Monday, meanwhile, officials reported that the state’s sage grouse population has dropped 52% since the federal government decided not to list the birds under the Endangered Species Act in the fall of 2015.

Wildfires, as well as oil and gas exploration and farming, have cut into the grouses’ habitat, so that as few as 200,000 are believed to remain out of as many as 16 million a century ago.