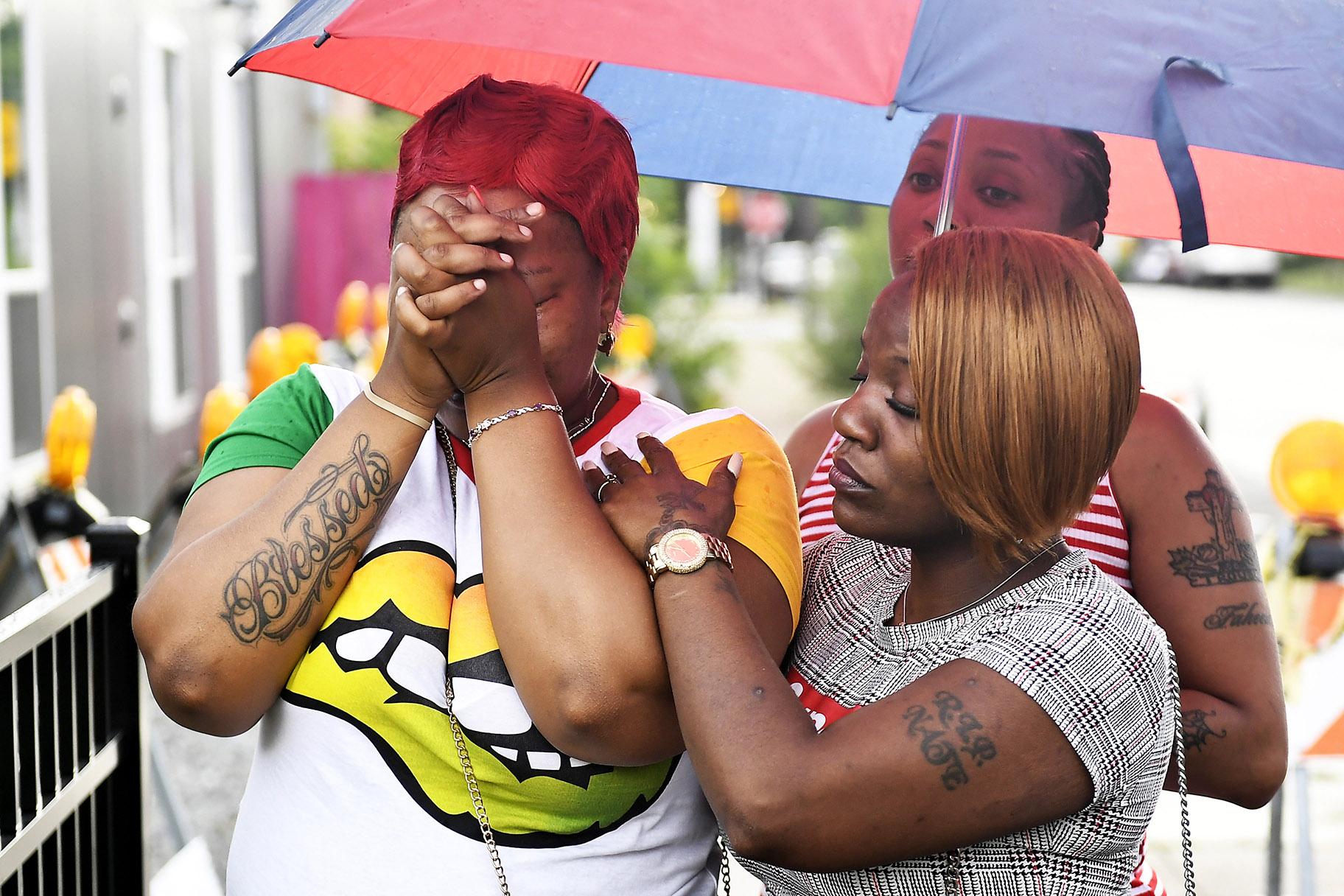 Charvonda Andrews is consoled Tuesday, July 30, 2019 in Chicago as she mourns two women killed July 26 while working as volunteers with a group called Mothers Against Senseless Killings. (John Alexander / Chicago Sun-Times via AP)

CHICAGO (AP) — Two women who worked with a group called Mothers Against Senseless Killings to try to stop gun violence in their South Side Chicago neighborhood were killed by bullets that police don’t believe were intended for them.

The gunfire on Friday night was instead meant for a man who is affiliated with a Chicago street gang and recently got out of prison, police spokesman Anthony Guglielmi said. The 58-year-old man, who was struck in the arm in the shooting and whose name hasn’t been released, is not cooperating with police, Guglielmi said.

“We have no information to suggest they were the intended targets,” he said Tuesday, adding that police are still seeking leads in the case. No arrests have been made.

The deaths of 26-year-old Chantell Grant and 35-year-old Andrea Stoudemire in the Englewood neighborhood served as a grim reminder of the kind of violence that led them to join Mothers Against Senseless Killings. The anti-violence group launched five years ago following the shooting death of another young mother at the same corner.

“That’s why we’re out here seven days a week ... trying to create a safe place where people can learn to be neighbors and not kill each other,” said the group’s founder, Tamar Manasseh.

She said she’s not willing to accept the notion that Grant, a mother of four, and Stoudemire, who had three children, were just in the wrong place at the wrong time.

“They killed mothers on a corner where mothers sit every day,” Manasseh said. “You don’t have mothers killed in a place that is sacred to mothers and not take that as a message.”

The drive-by shooting followed what has become a familiar pattern in Chicago, where more people are fatally shot than in any other city in the U.S. Though homicides have decreased in recent years and are on a pace to drop again this year, police statistics show there have been 281 in 2019 as of July 28. And during the weekend in which the two women died, 48 people were shot in the city, eight of them fatally.

A 23-year-old woman was shot in the leg, back and face on June 25 by someone in a black vehicle in the same block where Grant and Stoudemire were gunned down, according to the Chicago Sun-Times. The woman survived, and police said there is no indication that shooting was connected to the one that killed the two mothers.

Grant and Stoudemire were found lying on the sidewalk after a spray of bullets came from inside a blue SUV, police said.

Manasseh said the women had been on the corner for hours Friday handing out food to other mothers and keeping watch over a vacant lot the group has turned into a play area for neighborhood children. She said Grant and Stoudemire had finished up for the day and had begun walking to a store to get food for themselves and their children when they were shot.

“They can’t even walk to the store without getting killed,” said Manasseh, her voice rising. “They were killed for parenting.”