Chicago is often called the most American of American cities, and it is true that by the sweat of our collective brow, our city has given much to our country: house music, the City Beautiful movement, the 40-hour workweek.

But of all our achievements, one towers above the rest in cheesy, saucy distinction: the Chicago-style deep-dish pizza.

The pizza was brought stateside by Italian immigrants, but in Chicago, it didn’t make it out of Little Italy until 1943, when Ike Sewell and Ric Riccardo opened Pizzeria Riccardo at 29 E. Ohio St. The original location, which is still there today, was renamed Pizzeria Uno 12 years later when they opened a second location they named Pizzeria Due.

So where did they get the idea to go deep on pizza? We have not been able to determine what, exactly, sparked the innovation. Maybe Sewell and Riccardo came into a cheap lot of pie tins and decided to run with it. Maybe they got tired of New York Italians jabbering endlessly about their floppy pizza and wanted to one-up them. Maybe winter had set in and they succumbed to the uniquely Midwestern desire for a casserole, but one made of pizza. Who’s to say? Genius is often shrouded in mystery.

In any event, their Chicago-style pizza flipped the idea of pizza on its head. The crust remained on the bottom, with an extra dose of olive oil to keep it crisp and resilient enough to hold up to a tonnage of toppings. Cheese and toppings got layered on before the tomato sauce. The result was a hit, and set up a lasting rivalry between those who prefer flaccid, foldy slices of pizza and those who are right.

As they say, success has many fathers, and Chicago-style pizza is no exception. A one-time employee of Pizzeria Uno, Rudy Malnati Sr. claimed to have helped develop the original recipe for Chicago-style pizza and that Ike Sewell had nothing to do with it. The Malnatis say that Rudy Malnati and his son Lou managed and ran Pizzeria Uno after Ric died until Rudy Sr. died as well. Lou, of course, went on to begin his own pizzeria in Lincolnwood – the eponymous Lou Malnati’s – in 1971, and another pizza dynasty was born. 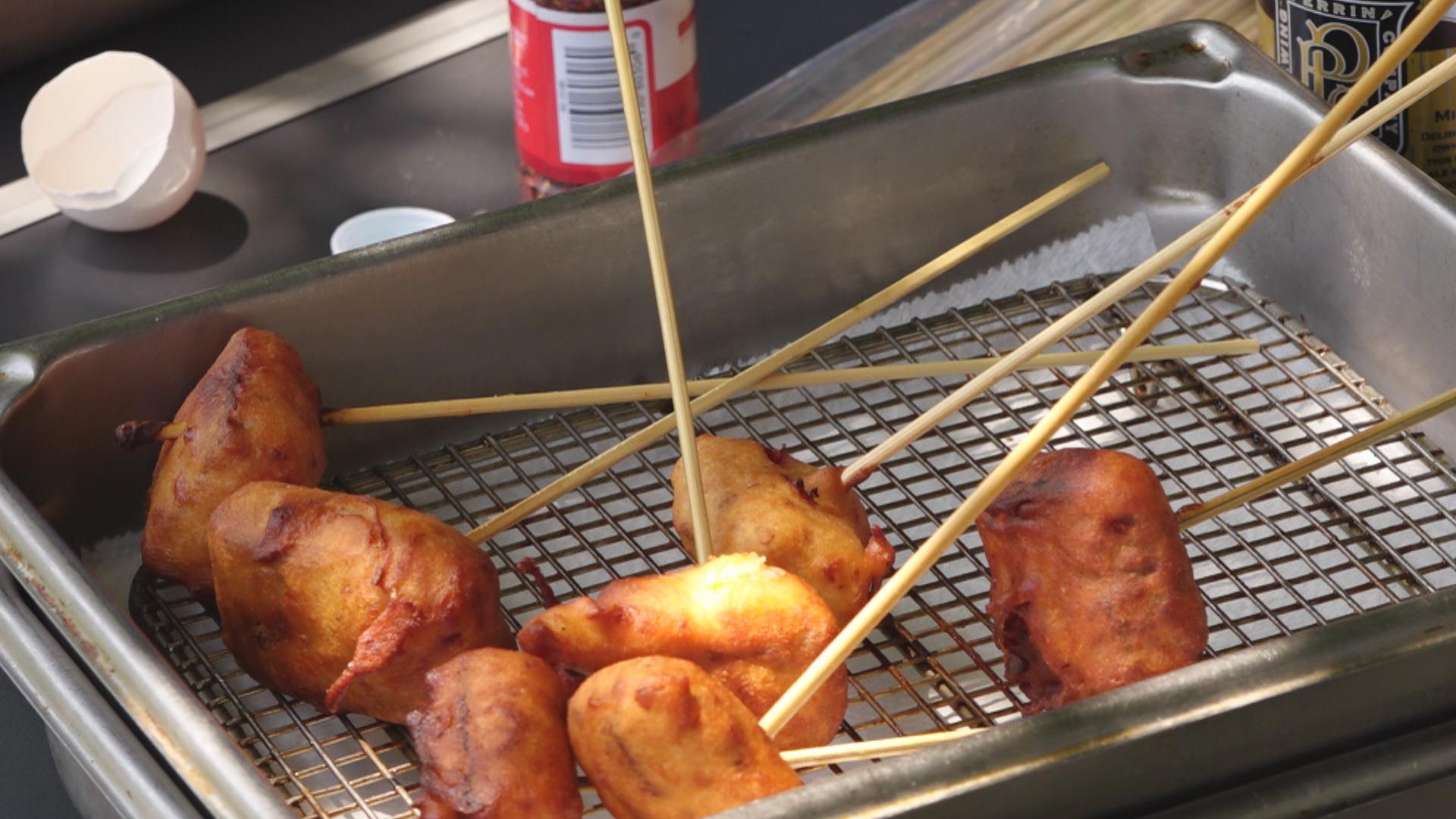 For frying purposes, we selected a relatively new invention in the world of pizza – the gluten-free pizza. It sounds fancy, but it’s a really simple idea – they just replaced the crust with a base of Italian sausage. (Think of all the things in your life that could be improved by replacing them with a disc of Italian sausage. These guys are onto something.) Not only does that neatly sidestep the concern of an oil-soaked crust post-deep frying, it allowed us to use a gluten-free batter for Nick’s batch, and a beer batter for the glutinous among us. (Plus, it’s pizza and beer in one bite!) Friends in frydom, we are proud to call this one an unqualified American success.

Cut pizza into bite-size squares and pierce each with a skewer. Whisk together remaining ingredients, then dip pizza bites into batter. Fry in hot oil until puffy and golden, and marvel at the spirit of American innovation. Our best ideas are yet to come.