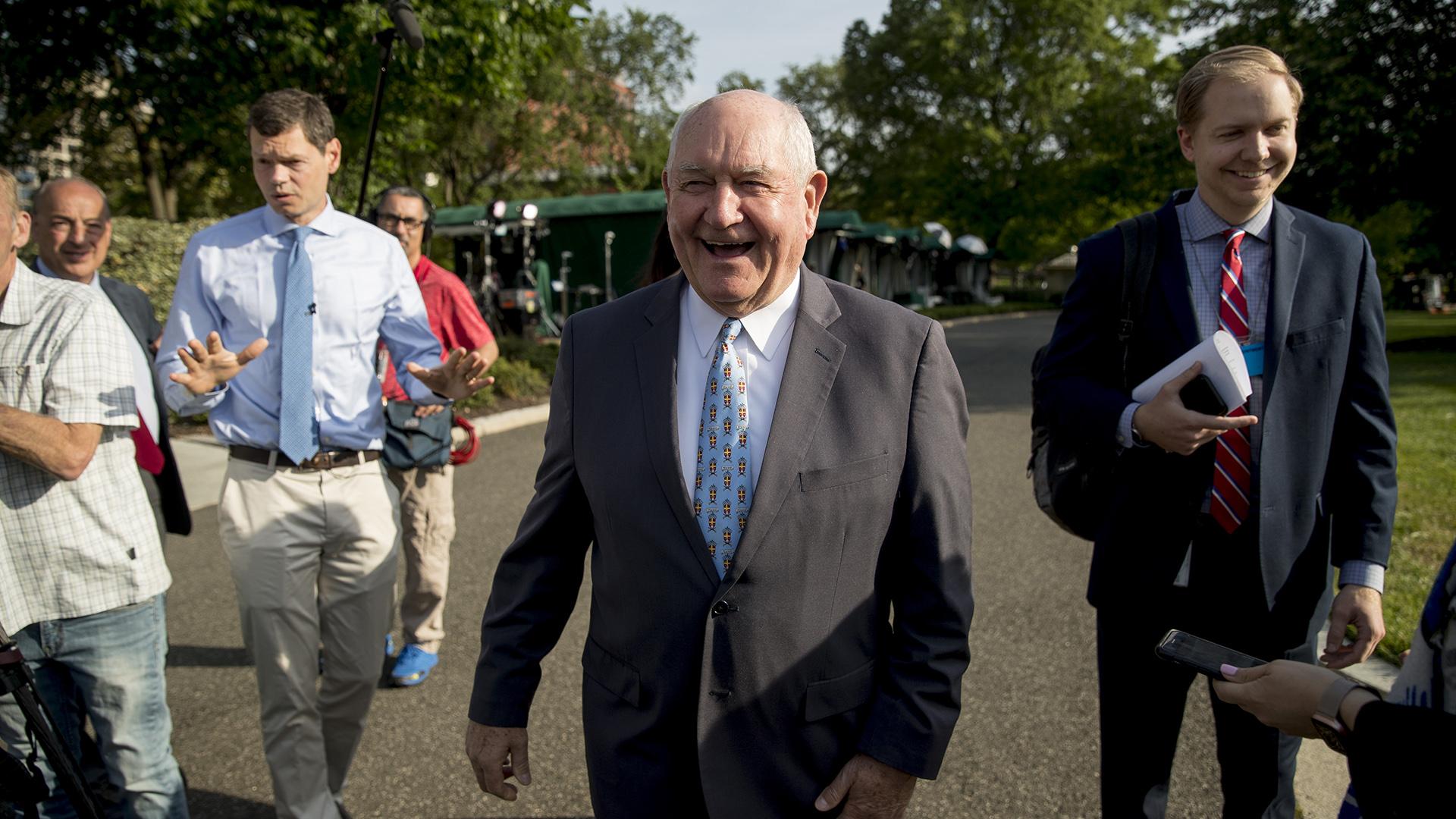 Agriculture Secretary Sonny Perdue laughs with a reporter on the North Lawn of the White House in Washington, Thursday, May 23, 2019. (AP Photo / Andrew Harnik)

WASHINGTON (AP) — President Donald Trump rolled out another $16 billion in aid for farmers hurt by his trade policies, and financial markets shook Thursday on the growing realization that the U.S. and China are far from settling a bitter, yearlong trade dispute.

U.S. Agriculture Secretary Sonny Perdue said that the first of three payments is likely to be made in July or August and suggested that the U.S. and China were unlikely to have settled their differences by then.

“The package we’re announcing today ensures that farmers do not bear the brunt of unfair retaliatory tariffs imposed by China and other trading partners,” Perdue said.

“We will ensure our farmers get the relief they need and very, very quickly,” Trump said.

Seeking to reduce America’s trade deficit with the rest of the world and with China in particular, Trump has imposed import taxes on foreign steel, aluminum, solar panels and dishwashers and on thousands of Chinese products.

U.S trading partners have lashed back with retaliatory tariffs of their own, focusing on U.S. agricultural products in a direct shot at the American heartland, where support for Trump runs high.

William Reinsch, a trade analyst at the Center for Strategic and International Studies and a former U.S. trade official, called the administration’s aid package for farmers “a fairly overt political ploy.”

“It’s not economics,” Reinsch said. Trump wants to win the farm states again in the 2020 election, “and he’s got members of Congress beating up on him” to resolve the trade conflicts.

Financial markets slumped Thursday on heightened tensions between the U.S. and China. The Dow Jones industrial average fell 286 points, or 1%, to 25,490. It had been down 448 points earlier in the day.

U.S. crude plunged 6% on fears that the trade standoff could knock the global economy out of kilter and kill demand for energy.

Economists at the New York Federal Reserve, meanwhile, estimated the latest round of tariff hikes will cost the typical U.S. household $831 a year. “In sum, according to our estimates, these higher tariffs are likely to create large economic distortions and reduce U.S. tariff revenues,” the New York Fed economists wrote.

Talks between the world’s two biggest economies broke off earlier this month with no resolution to a dispute over Beijing’s aggressive efforts to challenge American technological dominance. The U.S. charges that China is stealing technology, unfairly subsidizing its own companies and forcing U.S. companies to hand over trade secrets if they want access to the Chinese market.

Trump and Chinese President Xi Jinping are expected to discuss the standoff at a meeting of the Group of 20 major economies in Osaka, Japan, next month. There are no current plans for talks to occur before then.

Speaking to reporters Thursday, Trump suggested that he might be willing to make the embattled Chinese telecommunications giant Huawei part of the trade talks with China. His administration last week put Huawei, which it has called a threat to national security, on a blacklist that effectively barred U.S. firms from selling the Chinese company computer chips and other components without government approval. The move could cripple Huawei, the world’s largest manufacturer of networking gear and second-biggest smartphone maker.

“I can imagine Huawei being included in some form of a trade deal,” Trump said. He offered no details but said any arrangement “would look very good for us, I can tell you that.”

Briefing reporters on the farm aid package, Perdue said he doubted that “a trade deal could be consummated before” the first payments to farmers in July or August.

The second payment will be made around November and the third likely in early 2020, USDA officials said, unless a trade deal has been reached by then.

The direct payments will make up $14.5 billion of the $16 billion package and will be handed out on a county-by-county basis. The amounts will be determined by how much each county has suffered from the retaliatory duties imposed by China, as well as previous tariffs put in place by the European Union and Turkey.

The rest of the package includes $1.4 billion to purchase surplus food commodities from farmers and distribute them to U.S. schools and food banks, and $100 million to help develop new export markets overseas.

“Farmers want trade, not aid, but this will be helpful,” said Republican Sen. Pat Roberts of Kansas, chairman of the Senate Agriculture Committee.

U.S. soybean exports to China have been hit particularly hard, falling from $12.3 billion in 2017 to just $3.2 billion last year.

The aid offsets some of the losses. But farmers are worried about the future and whether they can win back lost sales in China, a market they’ve spent years breaking into. “I don’t think any kind of bailout package, even if it was permanent, would substitute for the loss markets,” said Rufus Yerxa, president of the National Foreign Trade Council and a former U.S. trade official.

Trump has said that China is footing the bill for the farm bailout by paying the tariffs. But tariffs are taxes paid by U.S. importers, and studies have shown that American consumers and businesses usually end up absorbing the higher costs.

Perdue acknowledged that the tariffs, regardless of who pays them, are sent to the Treasury Department and not earmarked for the relief program. But he said that China is “indirectly” paying for the aid.

“The president feels that China is paying for this program through the tariffs,” Perdue said.

Trump has imposed 25% tariffs on $250 billion in Chinese imports and is planning to hit another $300 billion worth, a move that would extend import taxes to just about everything China ships to the United States.

Among those bracing for higher costs if the new tariffs kick in is Jay Foreman, CEO of Basic Fun!, a Boca Raton, Florida, toy company that imports from China.

“The thought of the government taking my money and giving it to farmers as subsidies to support their losses doesn’t sit well,” Foreman said by email. “It’s not fair to take money from a Florida company to support an Iowa farmer!  Farmers don’t want welfare. I’m sure they, like us, just want open free markets to trade in!”