The spring musical at Lyric Opera of Chicago has become an annual tradition. This year, the venerable opera company rumbles with “West Side Story,” the 1957 classic created by Leonard Bernstein, Jerome Robbins and Stephen Sondheim – with an assist from William Shakespeare.

“West Side Story” famously tells the story of the Jets and the Sharks – New York street gangs – and an ill-fated romance that echoes “Romeo and Juliet.”

Lyric Opera’s 43-piece orchestra accompanies the show, but for our studio performance we’ve opted for a stripped-down approach.

Joining us are Mikaela Bennett (Maria) and Amanda Castro (Anita) singing the connected songs “A Boy Like That” and “I Have a Love.” They are accompanied by Bill Billingham on piano.

Bennett performs the song “Somewhere,” below.

Below, a conversation with Bennett, Castro, Brett Thiele, who plays the role of Riff, and conductor James Lowe.

You’re performing this operatic show in the Lyric Opera House. Did the size of room affect the scale of your performances? Did director Francesca Zambello address that with you?

Thiele: Switching from a typical musical theater style to going into a house with 3,500 seats in it, it definitely took some adjusting. And we were directed in the style of maybe turning out a bit more than we’re used to and projecting a bit more than we’re used to. We are amplified on stage but when you sit in the house and you hear the show, it almost works against.

Bennett: And also just adjusting to the sight lines. It took a few rehearsals for us to really understand how the space in the house worked with us onstage. It took a while, but it’s incredible.

Castro: I think Francesca Zambello and [choreographer] Julio Monge did a great job of saying, “Okay this is your new house, now play!” And I think as far as the choreography goes, we had Rehearsal Room 200, which was great – it’s a big beautiful rehearsal studio. But then getting on that stage it was like somebody said, “OK, now here is your racetrack – sprint!” Because you have this ginormous stage and your parameters now are out, not just right and left but you’re performing even farther out than you would. Filling up the space with movement that is already grand, and then you’re getting on stage and what you were rehearsing felt small the moment you got on stage. It’s finding this new way of expanding it again. It’s magic.

The size of Lyric’s orchestra is bigger than the original Broadway orchestra – talk about the challenge the music presents to the orchestra.

Lowe: We have 43 players, which is quite a bit more than what they would have used on Broadway, partly that is we have more string players than they would have had, and we also split up some of the woodwind parts among different players, so people on Broadway would have doubled on instruments. Now we have individuals playing all those parts. The challenge is, it’s a very difficult score to play. It’s very rhythmic, it has a lot of syncopation, a lot of mixed meters, but it also is all kinds of different styles and so the players have to be adept at switching from style to style. And this orchestra is incredible. Obviously they’re fantastic players – they’re the Lyric Opera Orchestra – but also they really get the style – being able to swing, being able to play in jazz styles. It’s impressive how versatile they are. I think that comes from doing all these musicals the last several years. They’ve played everything.

This is a formidable show with a hallowed reputation. How do you handle the pressure of tackling a masterpiece?

Thiele: There’s a ton of trust that has to happen. They were able to pull together one of the most talented groups of people I’ve ever gotten to work with, and we know that when we get out there it’s going to happen, because we trust each other and the material is that good. You could almost put 40 chimpanzees and the show would still read because the material is that good. Luckily we also have a caliber of performer onstage and in the pit and backstage that can elevate it to a level that is pretty amazing.

Amanda and Mikaela, you’ve played these roles before. Does your approach change? Does the character evolve or deepen for you?

Bennett: Every single time. Each performance is always different and it always changes but I think the more time you spend on material the deeper you can get into it, and the more you grow with a piece, it either becomes deeper or simpler in a way. You get to know the piece and it becomes part of you in whatever way that you’ve changed.

Castro: I’m so blessed that I’ve been able to play this role at this point in my life specifically, and it’s always important remember too that Anita is a person, a person who has a family. She’s somebody who morphs, and it’s hard because Anita has one of the biggest rollercoaster tracks in the show emotionally. But there’s a lot meditation [to prepare for a performance], a lot of calling your family, there’s a lot of checking in, trusting your cast mates afterward and having a “woosah” moment with them. And there’s tears of joy, sadness, a lot of laughter. And it breathes. Each character in the show definitely breathes, and the person that’s playing that character breathes with them, and that’s the beauty of the show.

Brett and Amanda, is the choreography hard on a dancer’s body?

Thiele: This choreography is like playing four quarters of every sport. If you stand backstage you’ll see everybody running offstage breathless and sweating and on their hands and knees. In “Dance at the Gym,” I literally run offstage and take a full minute to get my heart rate back down before I go back on stage and jumping and running all over the stage again. It’s brilliant. And Jerome Robbins had a way of telling story with his choreography if you’re not giving 100% of yourself then you’re not telling the story correctly and people are paying too much money for us to not give them the story that they came to see.

Castro: Jerome Robbins was genius. I’m a dancer first, and I’ve never done anything like this in my life. It’s one of those things that it’s, the choreography is just as demanding as the social justice issues that it’s talking about. So it’s literally at the level of talking about gun violence, because these are issues that we talk about every day. People get tense, they get uncomfortable and shifting in their seats but it requires your full attention, and that’s what this choreography does in order for us to tell you what the story is trying to tell you.

And this is a story that resonates today: street violence, fear of immigrants, the futility of prejudice …

Castro: The show is so 2019. We just had another school shooting. It’s one of those things that … We’re still grappling with this.

Bennett: Yeah, we’re still dealing with the same issues that they were when they wrote this show. It hasn’t changed.

Thiele: The message for me that’s timeless in this piece is fear, and people will always have fear unfortunately. It’s a survival instinct that we’ll always have and for me this show is a warning of what happens when we allow fear to go unchecked. People die because we don’t understand.

What next on your calendars?

Lowe: I am going to Glimmglass Festival which is in upstate New York to do a production of “Showboat,” also with Francesca Zambello.

Thiele: You can find me on a beach in Indonesia. [Laughter] That’s all I’ve got planned.

Bennett: I’m headed to St. Louis to play Cinderella at the Muny Theater.

Castro: I am going to the Ordway Center for the Performing Arts [in St. Paul, Minnesota] to perform “42nd Street.” 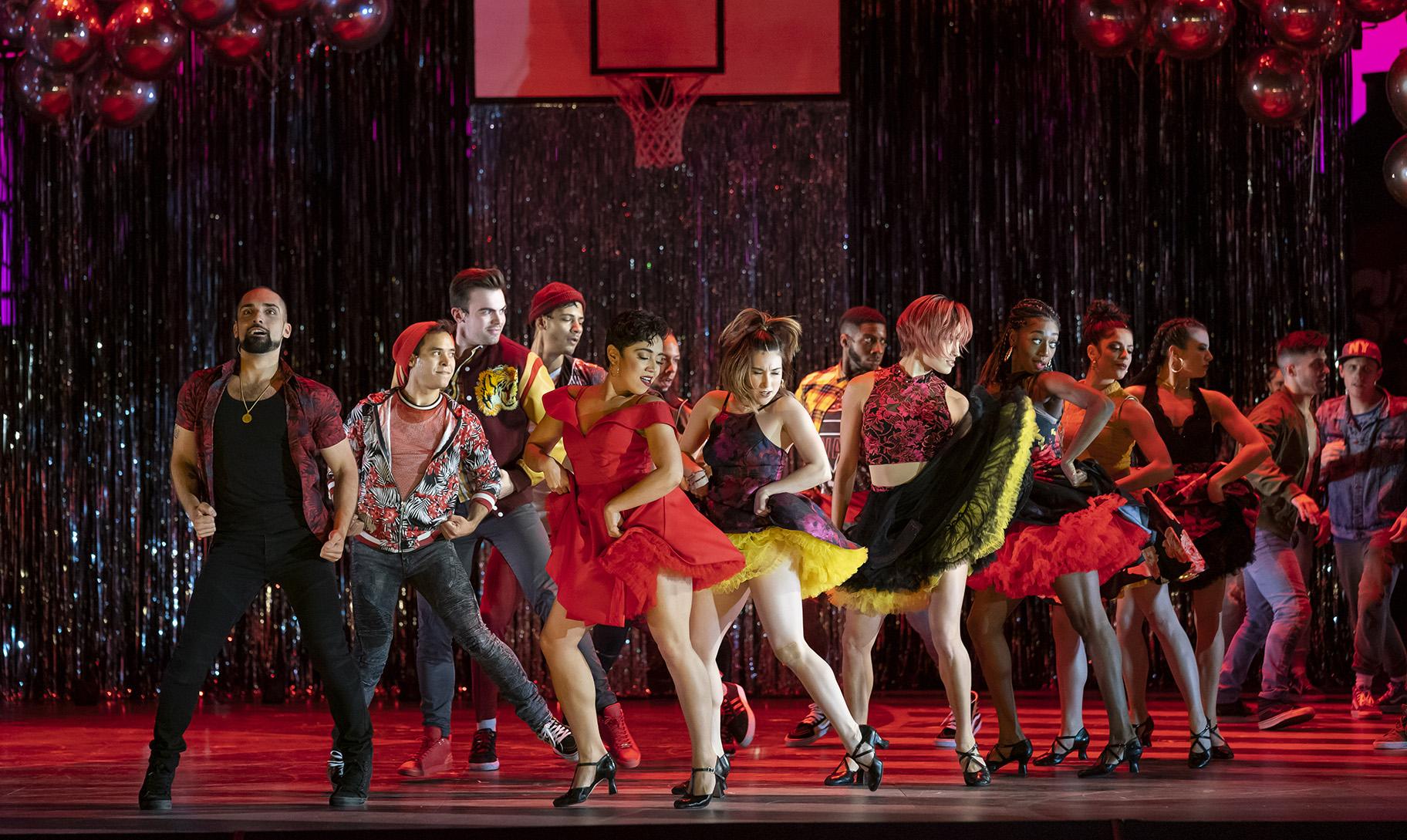 Growing up, was “West Side Story” a favorite show of yours?

Castro: Since I was little girl I always dreamt of the opportunity to sing this incredible music and just play an iconic, incredible role and here it is at the Lyric Opera of Chicago! Never in a million years did I think I’d be able to do this, because growing up watching the movie there was only one Latina role. And I was like, there’s so many of us I’d never get that role. So the idea that I’m here now is just testimony to work and the story that there is space for all of us. One of the highlights of the show for me is [Makaela Bennett] that I get to play next to, and the way that it is so honest and with trust. The little moments onstage where you’re looking at somebody and you know how much trust is between you. It’s a magical feeling. I don’t have the language for it.