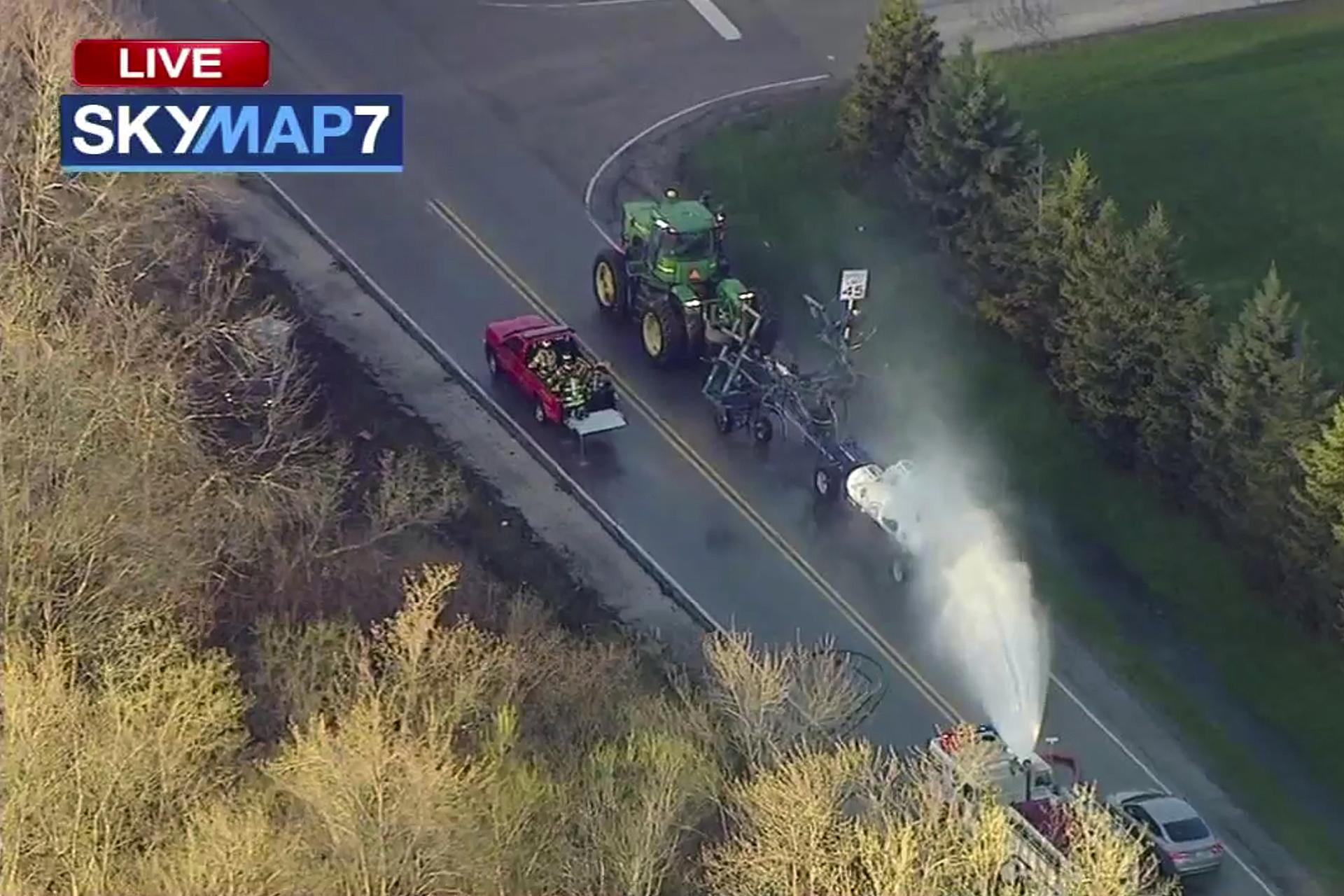 In this still image from video provided by ABC7 Chicago, a fire engine sprays water on a container of the chemical that farmers use for soil after anhydrous ammonia leaked Thursday, April 25, 2019, in Beach Park, Illinois. (ABC7 Chicago via AP)

BEACH PARK, Ill. (AP) — A chemical leak that caused a toxic plume to hang for hours over a northern Chicago suburb Thursday sickened dozens of people, including seven who are in critical condition, officials said.

Lake Forest Fire Chief Mike Gallo said a tractor was towing two separate two-ton containers of anhydrous ammonia when the leak occurred around 4:30 a.m. Initial reports suggested the vehicle was involved in a crash, but the sheriff’s office later said that was not the case. The cause of the leak has not been released.

The leak created a toxic cloud that lingered for several hours over Beach Park, about 40 miles north of downtown Chicago. Authorities ordered residents within a 1-mile radius to stay inside and close their windows. Area schools were closed for the day.

Pamela Burnett of unincorporated Warren Township said she was headed to her job in Kenosha, Wisconsin, when she drove through the toxic cloud. Burnett said she wasn’t sure if it was smoke or dust from the shoulder of the road.

“It kept on getting bigger and bigger — this wasn’t going away. I tried to slow down and not go through it," Burnett told reporters at the scene. “The next thing I knew, I couldn't breathe. It was such a strong smell. I thought to myself, ‘Lord this is it. I’m done now.’”

Burnett, 57, said she pulled off the road while “spitting and coughing” and called 911. She was taken to a hospital for treatment. Her condition wasn’t immediately known.

Eleven firefighters were among the 37 people who were hospitalized, and one of the injured firefighters was among the seven in critical but stable condition, according to the Lake County Sheriff’s Office. Three law enforcement officers were in good condition and several others were serious but stable, sheriff’s spokesman Christopher Covelli said.

Authorities said most of those injured suffered breathing problems.

“This is a very dangerous chemical that can cause unconsciousness and, worst case scenario, death,” Covelli said.

According to the Centers for Disease Control and Prevention, anhydrous ammonia is a colorless gas that can cause breathing difficulties, burns, blisters and is fatal if breathed in high concentrations. Farmers use it to add nitrogen to soil.

The first two officers who responded to the leak had to retreat because they were overcome by the ammonia, Covelli said.

“It was difficult to get to that scene initially with those chemicals in the air without proper protection and gear to wear over the face,” he said.

Authorities said about two dozen law enforcement agencies responded to the leak. The leak was contained within a few hours and the leaking tank was empty, authorities said, adding that they were waiting for the chemical plume to dissipate.

The order to remain indoors was lifted by late morning, Covelli said.

The National Transportation Safety Board announced late Thursday it is sending a team to Illinois to investigate the chemical release. The NTSB said the team of four will be on the scene Friday.