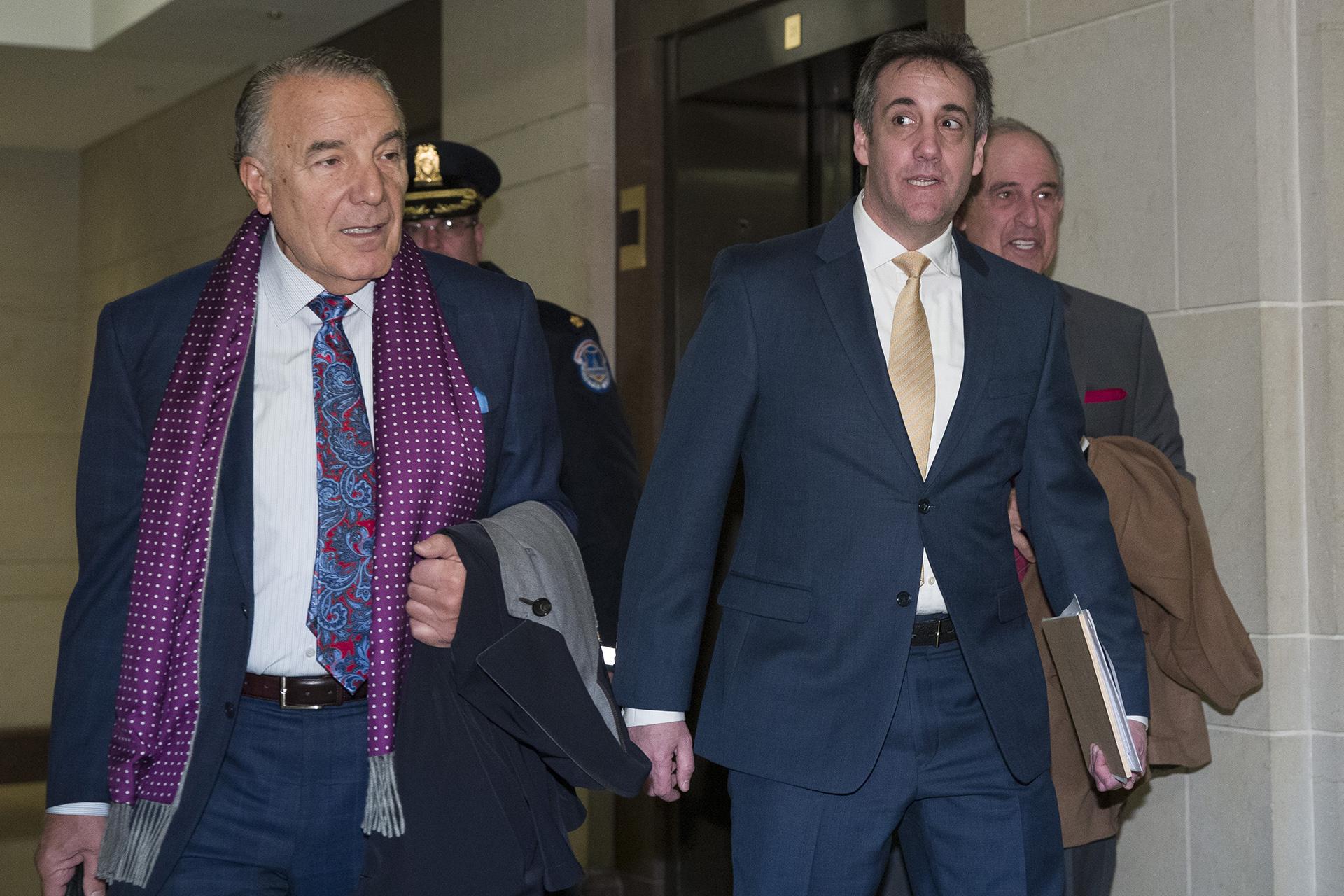 WASHINGTON (AP) — President Donald Trump’s former lawyer returned to Capitol Hill on Thursday for hours of closed-door questioning after publicly branding his former boss a racist and a con man who lied about business dealings in Russia and directed him to conceal extramarital relationships.

Cohen was speaking privately Thursday to the House Intelligence Committee for the last of his three appearances before Congress this week.

Cohen, who pleaded guilty last year to lying to Congress and reports to prison soon for a three-year sentence, gave harsh testimony about Trump on Wednesday. He said Trump knew in advance that damaging emails about Democrat Hillary Clinton would be released during the 2016 campaign — a claim the president has denied — and accused Trump of lying during the 2016 campaign about a Moscow real estate protect.

Two of Trump’s most vocal defenders, GOP Reps. Jim Jordan of Ohio and Mark Meadows of North Carolina, sent a referral to the Justice Department alleging Cohen lied in his testimony. Their letter to Attorney General William Barr details several Cohen statements they said were false, including claims that he “never defrauded any bank” and did not want a job in Trump’s White House.

They pointed to Cohen’s guilty plea for making false statements to a banking institution and to court filings that say Cohen told friends he wanted a White House job.

Cohen’s testimony unfolded as Trump was in Vietnam meeting with North Korean leader Kim Jong Un. Trump said he tried to watch as much of Cohen’s marathon hearing as he could. Trump called the hearing “fake” and said it was a “terrible thing” for Democrats to hold it during his summit.

He seized on Cohen’s concession that he had no direct evidence that Trump or his aides colluded with Russia to get him elected, the primary question of special counsel Robert Mueller’s investigation. Trump said he was a “little impressed” that Cohen had said that to the House Oversight and Reform Committee.

Cohen, shaking off incessant criticism from Republicans, was the first Trump insider to pull back the curtain on a version of the inner workings of Trump's political and business operations. He likened the president to a “mobster” who demanded blind loyalty from underlings and expected them to lie on his behalf.

“My loyalty to Mr. Trump has cost me everything: my family’s happiness, friendships, my law license, my company, my livelihood, my honor, my reputation and soon my freedom,” Cohen said. “I will not sit back, say nothing and allow him to do the same to the country.”

Cohen said prosecutors in New York were investigating conversations Trump or his advisers had with him after his office and hotel room were raided by the FBI last April. Cohen said he could not discuss that conversation, the last contact he said he has had with the president or anyone acting on his behalf, because it remains under investigation.

The appearance marked the latest step in Cohen’s evolution from legal fixer for the president — he once boasted he'd “take a bullet” for Trump — to a foe who has implicated him in federal campaign finance violations.

As Republicans blasted him as a convicted liar, a mostly unrattled Cohen tried to blunt the attacks by repeatedly acknowledging his own failings. He called himself a “fool,” warned lawmakers of the perils of blind loyalty to a leader undeserving of it and pronounced himself ashamed of what he had done to protect Trump.

Cohen, due to begin a three-year prison sentence in May, described himself as cooperative with multiple investigations in hopes of reducing his time behind bars. He is seen as a vital witness for federal prosecutors because of his proximity to the president during key episodes under investigation and their decade-long professional relationship.

He was the first of six Trump aides charged in the Trump-Russia investigation to testify publicly about crimes committed during the 2016 campaign and in the months that followed. He also delivered biting personal commentary on a president he said never expected to win in the first place.

“The campaign — for him — was always a marketing opportunity,” Cohen said.

He recounted that Trump made him threaten schools he attended to not release his grades and SAT scores and denigrated blacks as “too stupid” to vote for him. He said Trump once confided to him that, despite his public explanation of a medical deferment from the Vietnam War because of bone spurs, he never had any intention of fighting there.

“I find it ironic, President Trump, that you are in Vietnam right now,” Cohen said.

Cohen gave lawmakers his first-person account of how he arranged to buy the silence of Daniels and former Playboy model Karen McDougal, who said they had sex with Trump. He described a February 2017 conversation with Trump in the Oval Office in which the president reassured him that reimbursement checks sent through Federal Express were coming but would take some time to get through the White House system.

He said the president spoke to him last year to discuss the public messaging around the transaction and even put his wife, Melania Trump, on the phone so Cohen could lie to her.

“Lying to the first lady is one of my biggest regrets,” Cohen said. “She is a kind, good person. I respect her greatly, and she did not deserve that.”

In an allegation concerning Mueller’s probe, Cohen said he overheard Trump confidant Roger Stone telling the candidate in the summer of 2016 that WikiLeaks would dump damaging information about Clinton.

Trump put Stone on speakerphone as Stone relayed that he had communicated with WikiLeaks founder Julian Assange and that “within a couple of days, there would be a massive dump of emails that would damage Hillary Clinton’s campaign,” Cohen said. Damaging emails U.S. officials say were hacked by Russia were later released by WikiLeaks.

Trump responded by saying “wouldn't that be great,” Cohen said.

Stone disputed that account, and Barry Pollack, a lawyer for Assange, said Stone and Assange did not have the telephone call that Cohen described.

Cohen also suggested Trump implicitly told him to lie about a Moscow real estate project. Cohen has admitted lying about the project, which he says Trump knew about as Cohen was negotiating with Russia during the campaign. Cohen said Trump did not directly tell him to lie, but “he would look me in the eye and tell me there’s no business in Russia and then go out and lie to the American people by saying the same thing.”

Cohen said he doesn’t have direct evidence that Trump colluded with the Russian government during the election but he has “suspicions,” including after a June 2016 meeting between the president’s oldest son and a Kremlin-connected lawyer.

“I wouldn't use the word ‘colluding.’ Was there something odd about the back-and-forth praise with President Putin?” Cohen said. “Yes, but I’m not really sure I can answer that question in terms of collusion.”