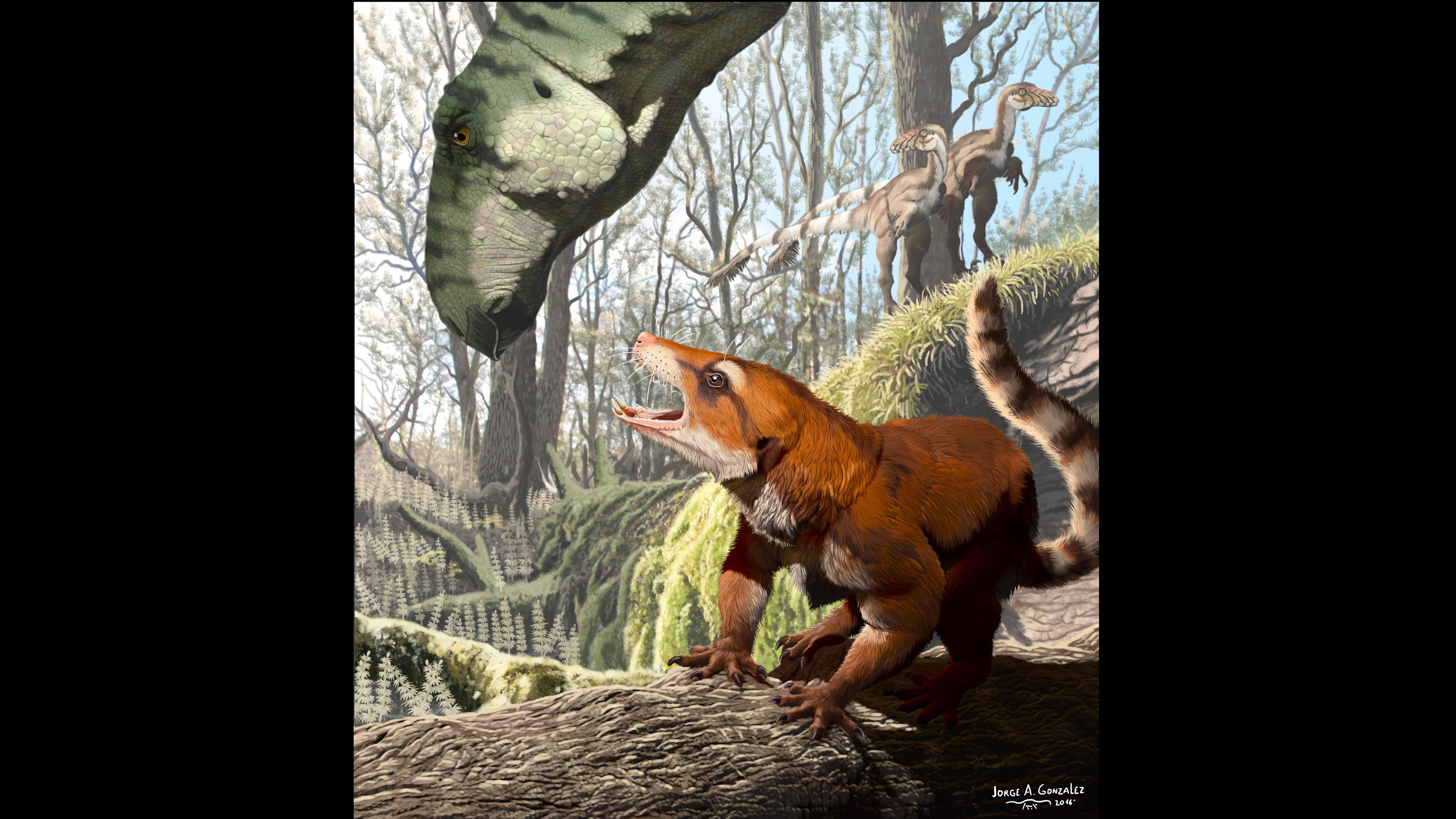 Life restoration of the new mammaliaform species Cifelliodon wahkarmoosuch. The animal is estimated to have weighed 2.5 pounds and probably grew to be about the size of a small hare. (Jorge A. Gonzalez illustration)

The discovery of a nearly 130-million-year-old fossilized skull in Utah suggests the divide of the ancient supercontinent, Pangea, occurred 15 million years later than previously believed, according to a new study.

The fossil also provides evidence that a group of reptile-like mammals experienced an unsuspected burst of evolution across several continents, according to a University of Chicago press release.

“Based on the unlikely discovery of this near-complete fossil cranium, we now recognize a new, cosmopolitan group of early mammal relatives,” said Adam Huttenlocker, lead author of the study and assistant professor at the Keck School of Medicine of University of Southern California, in the press release.

Previously, paleontologists believed that the primitive precursors to mammals were anatomically similar, ecological generalists. “But now we know mammal precursors developed capacities to climb trees, to glide, to burrow into the ground for subterranean life and to swim,” said Zhe-Xi Luo, senior author of the study and professor of organismal biology and anatomy at the University of Chicago. “With this new study, we also know that they dispersed across (the globe) from Asia and Europe, into North America, and further onto major southern continents.”

The study, published in the journal Nature, updates the understanding of how mammals evolved and dispersed across major continents during the age of dinosaurs. “One of the major fundamental parts of the Earth’s history in the age of the dinosaur is the major pieces of landmasses start to drift apart from a unified supercontinent called Pangea into smaller pieces,” said Luo.

The fossil discovery suggests mammal migration and that of their close relatives continued into the Early Cretaceous period (145-101 million years ago). “When you get into Early Cretaceous, the continents are supposed to be sufficiently apart,” Luo said. Meaning, animals couldn’t just walk from one continent to another. There would be a body of water separating them.

“This (fossil) basically implies as late as 130 million years (ago) there are some animal dispersal routes over land that are continuous,” he said. Based on the understanding of the evolution of this particular fossil, the land routes “had to be there.” 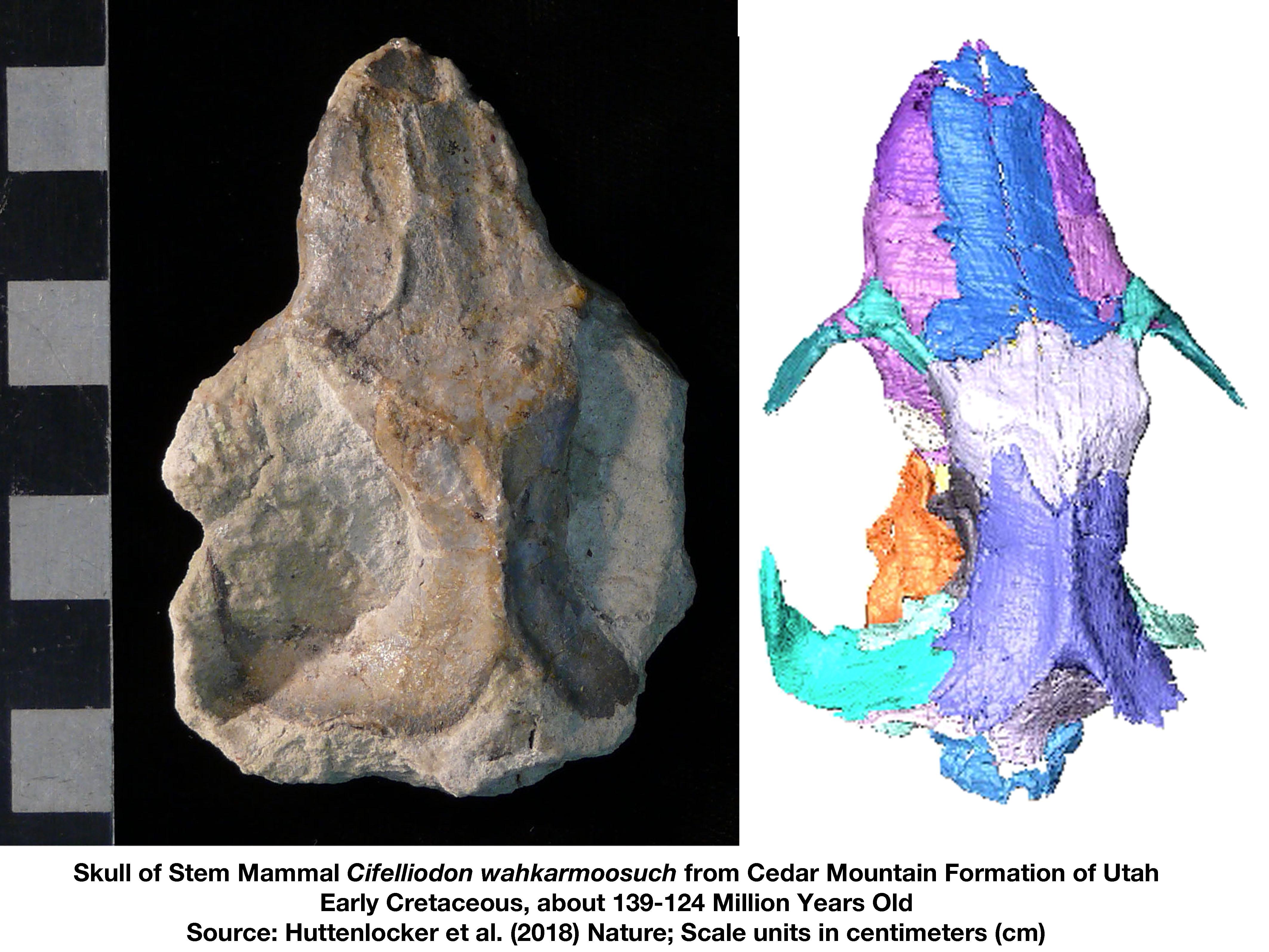 The fossilized 3-inch skull, discovered beneath the foot of a large dinosaur in the Cretaceous beds in eastern Utah, is named Cifelliodon wahkarmoosuch in honor of famed paleontologist Richard Cifelli. The species name, “wahkarmoosuch,” means “yellow cat” in the Ute tribe’s language in respect of the area where it was found.

“The skull of Cifelliodon is an extremely rare find in a vast fossil-bearing region of the Western Interior, where the more than 150 species of mammals and reptile-like mammal precursors are represented mostly by isolated teeth and jaws,” said James Kirkland, study co-author in charge of the excavation and the Utah State Paleontologist in the UChicago press release.

Scientists used high-resolution computed tomography (CT) scanners to analyze the skull, which had tiny eye sockets but giant “olfactory bulbs” to process the sense of smell. The animal was possibly nocturnal and depended on sense of smell to root out food, Huttenlocker said. It had teeth similar to fruit-eating bats and could nip, shear and crush. It might have incorporated plants into its diet.

Cifelliodon was estimated to weigh up to 2.5 pounds, which would seem small compared to many living animals, but it was a giant among its Cretaceous contemporaries. A full-grown Cifelliodon was probably around the size of a small hare or pika (a small mammal with rounded ears, short limbs and a very small tail).

Huttenlocker and his colleagues placed Cifelliodon within a group called Haramiyida, an extinct branch of mammal ancestors related to true mammals. The fossil was the first of its particular subgroup – Hahnodontidae – found in North America. Previously, this particular subgroup was known only in Africa during the Cretaceous period (145-66 million year ago).

Since Cifelliodon belongs to this subgroup, Huttenlocker says this provides evidence of migration routes between the continents that are now separated into northern and southern hemispheres.

“But it’s not just this group of haramiyidans,” Huttenlocker said in a statement. “The connection we discovered mirrors others recognized as recently as this year based on similar Cretaceous dinosaur fossils found in Africa and Europe.”