But her work on behalf of that community runs far deeper. Often overlooked by her father in favor of her brothers’ political futures -- and motivated by her father’s severe mistreatment of her sister – Shriver was a complicated, effective woman described by many as “formidable.”

Now, that formidable woman has a full biographical portrait of her own, in the new book “Eunice: The Kennedy Who Changed the World.”

Joining Chicago Tonight for a conversation is the book’s author, Eileen McNamara. She’s the director of Brandeis University’s journalism program and a Pulitzer Prize-winning former reporter and columnist for the Boston Globe.

Below, an excerpt from “Eunice.”

The mentally ill and the mentally retarded need no longer be alien to our affections or beyond the help of our communities. 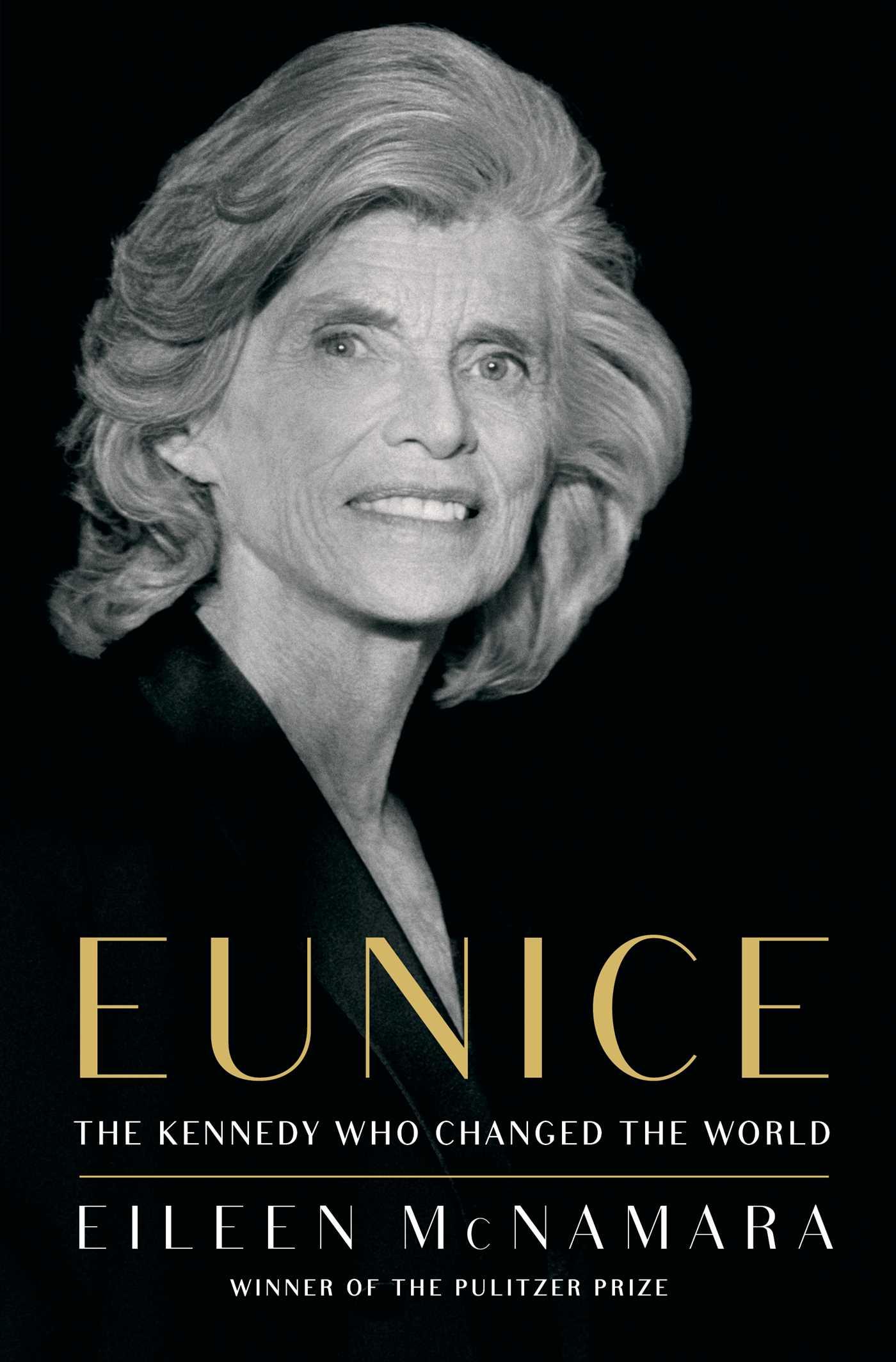 IN HER COBALT-BLUE wool suit and white kidskin gloves, she could have been mistaken for a guest at a White House social reception in­stead of the architect of the pioneering legislation the president of the United States was about to sign.

As John F. Kennedy slid into his leather armchair at the center of the conference table in the Cabinet Room, the forty-two-year-old suburban mother of three receded behind a wall of dignitaries, including the Speaker of the House, the Senate majority leader, the secretary of labor, the chief of pediatrics at Johns Hopkins Hospital, and assorted senators and congressmen.

She does not appear in the formal group portraits from that day, having settled into a spot far behind the president against the east wall, nearly enfolded by the green brocade drapes bracketing the French doors that open onto the Rose Garden. President Kennedy does not mention her in his recorded remarks at the signing ceremony for the Mental Retardation Facilities and Community Mental Health Centers Construction Act of 1963, singling out instead Senator Lister Hill of Alabama, chairman of the Senate Committee on Labor and Public Welfare, and Representative Oren Harris of Arkansas, chairman of the House Committee on Interstate and Foreign Commerce, who shepherded S. 1576 to passage.

It was only after he had distributed all but one of the ceremonial fountain pens that the president turned to look for Eunice Kennedy Shriver and, rising from his seat, strode through the crowd toward the back wall to hand the last pen to his sister, the guiding force behind an unprecedented federal commitment to combating mental retardation.

"This bill will expand our knowledge, provide research facilities to determine the cause of retardation, establish university related diagnostic research clinics, and permit the construction of university centers for the care of the retarded," the president told those gathered . "For the first time, parents and children will have available comprehensive facilities to diagnose and either cure or treat mental retardation. For the first time, there will be research centers capable of putting together teams of experts working in many different fields. For the first time, state and federal governments and voluntary organizations will be able to coordinate their manpower and facilities in a single effort to cure and treat this condition."

There had been no reason to expect that Kennedy would make mental retardation a White House priority. Foreign policy was his primary focus in 1963, a year in which he declared to the people of the divided German city of Berlin that "in the world of freedom, the proudest boast is 'Ich bin ein Berliner,'" a year in which he would commit sixteen thousand US troops to South Vietnam and covert energy toward ousting Fidel Castro from Cuba. Civil rights was the most pressing item on his domestic agenda the year that Governor George C. Wallace of Alabama blocked the entrance of three black students into the University of Alabama, the year that a white supremacist murdered Mississippi NAACP field director Medgar Evers, and the year that the Reverend Dr. Martin Luther King Jr. delivered his "I Have a Dream" speech on the steps of the Lincoln Memorial during the March on Washington.

Kennedy's indifference to mental retardation had long frustrated advocates. The memory still stung of Kennedy, then a senator, brushing past Elizabeth M. Boggs, the president of the National Association for Retarded Children, in a Capitol Hill corridor where she was waiting to testify before the Senate Committee on Labor and Public Welfare on the educational needs of retarded children. Kennedy was a member of that committee, but he did not stick around for the hearing that April day in 1957 even though Boggs knew-as the nation as yet did not-that mental retardation had touched Kennedy's own family.

But Boggs and her cause would find an ally elsewhere in the Kennedy clan. Eunice Kennedy Shriver took the reins of the Joseph P. Kennedy Jr. Foundation around the time Jack blew past Boggs in that hallway, and she turned the attention of the previously unfocused family charity exclusively to the needs of the retarded. With her father's fortune and her husband's help, she traveled the country, consulting experts and educating herself about the scope of the problem and the dearth of resources devoted to ad­ dressing it. Her efforts culminated in millions of dollars in grants from the Kennedy Foundation to researchers at Harvard, Johns Hopkins, Georgetown, Chicago, Wisconsin, and Stanford universities.

It was only a beginning. She had learned enough by the time her oldest surviving brother was elected president on November 8, 1960, to know that the efforts of a small family foundation were no match for what the federal government could, and, in her view, should be doing for the 5.4 million children and adults in the United States with mental retardation. The few federal programs that did exist were scattered throughout the bureaucracy, intermingled with aid for the physically handicapped and geared toward adults. It was not nearly enough.

Her brother's election gave her an opportunity to do more. Before he had even taken the oath of office, Eunice secured from Jack a commitment to appoint a presidential panel to investigate the needs of the retarded and to propose federal legislation to meet them. The president gave her a free hand, and she seeded the twenty-seven-member President's Panel on Mental Retardation with the most knowledgeable people in the field, including Boggs, a chemist by training and herself the mother of a severely retarded son.

Eunice Kennedy Shriver was not a member of the President's Panel; she did not want charges of nepotism to overshadow the work. Officially, she was "a consultant" to the group that she had willed into existence and drove to produce a report for the president within one year and legislation for him to sign within two.

She had pulled it off.

At the edge of that gathering of luminaries in the Cabinet  Room  on the last day of October in 1963, how moved she must have been  to hear the president pledge the nation's communal responsibility to those with mental retardation, a commitment that was unimaginable only a few years before.

"It was said, in an earlier age, that the mind of man is a far country which can be neither approached nor explored. But today, under present conditions of scientific achievement, it will be possible for a nation as rich in human and material resources as ours to make the most remote recesses of the mind accessible," the president vowed. "The mentally ill and the mentally retarded need no longer be alien to our affections or beyond the help of our communities."

It was the last bill John Fitzgerald Kennedy would ever sign. No one in the Cabinet Room on that sunny Thursday morning could have imagined that three weeks later in Dallas an assassin's bullet would end the life of the thirty-fifth president of the United States.

As much as John F. Kennedy's death would traumatize the nation he led, it would upend the dynamics in the family he left behind. There would be no more wall hugging for Eunice Kennedy Shriver. Without her brother in the White House, she would have to come out from behind the curtains to lead the movement she had just put on the national agenda.

Excerpt from EUNICE by Eileen McNamara

‘Daughter of the Cold War’ on George Kennan, Russia and Remarkable Life

Hanna Holborn Gray on ‘An Academic Life: A Memoir’