After serving as China bureau chief for the radio show “Marketplace” for nearly five years in Shanghai, journalist and New York native Scott Tong decided to take a deep dive into his family’s roots in China.

One of his first excursions was traveling with his father to the ancestral village of Tong, where the inhabitants share his surname.

The title of his resulting book reflects on that trip. “A Village with My Name: A Family History of China’s Opening to the World” straddles the line between history book and family memoir. The sometimes tragic, sometimes triumphant stories of his relatives echo the societal changes China went through in the 20th century – from Communist revolutions to widespread famines to a nation that gradually opened itself up to the West, becoming a global economic power.

As public opinions and regimes changed, along with ruling political ideologies, Tong says his relatives found themselves on the right and wrong sides of history.

Tong’s paternal grandfather and his father escaped China during its Communist revolution in 1949, leaving behind Tong’s uncle. As Tong’s father prospered overseas, receiving education and carving out a comfortable lifestyle in the U.S., his uncle was left with agriculture work and persecuted for his connection to anti-Communist, Nationalist relatives.

Tong frequently references “Instant China” – a superficial, anecdotal impression of China held by tourists, and even some journalists, after spending only a few days in the country. Tong says the concept oversimplifies the story of China’s modernization, concentrating the country’s economic boom on a period spanning only from the late 1970s to the early 1980s.

China’s sometimes-turbulent timeline and path to prosperity started much earlier than that, Tong argues. His book illustrates the country’s evolution through intimate and compelling family portraits.

Book Excerpt: ‘A Village With My Name’ 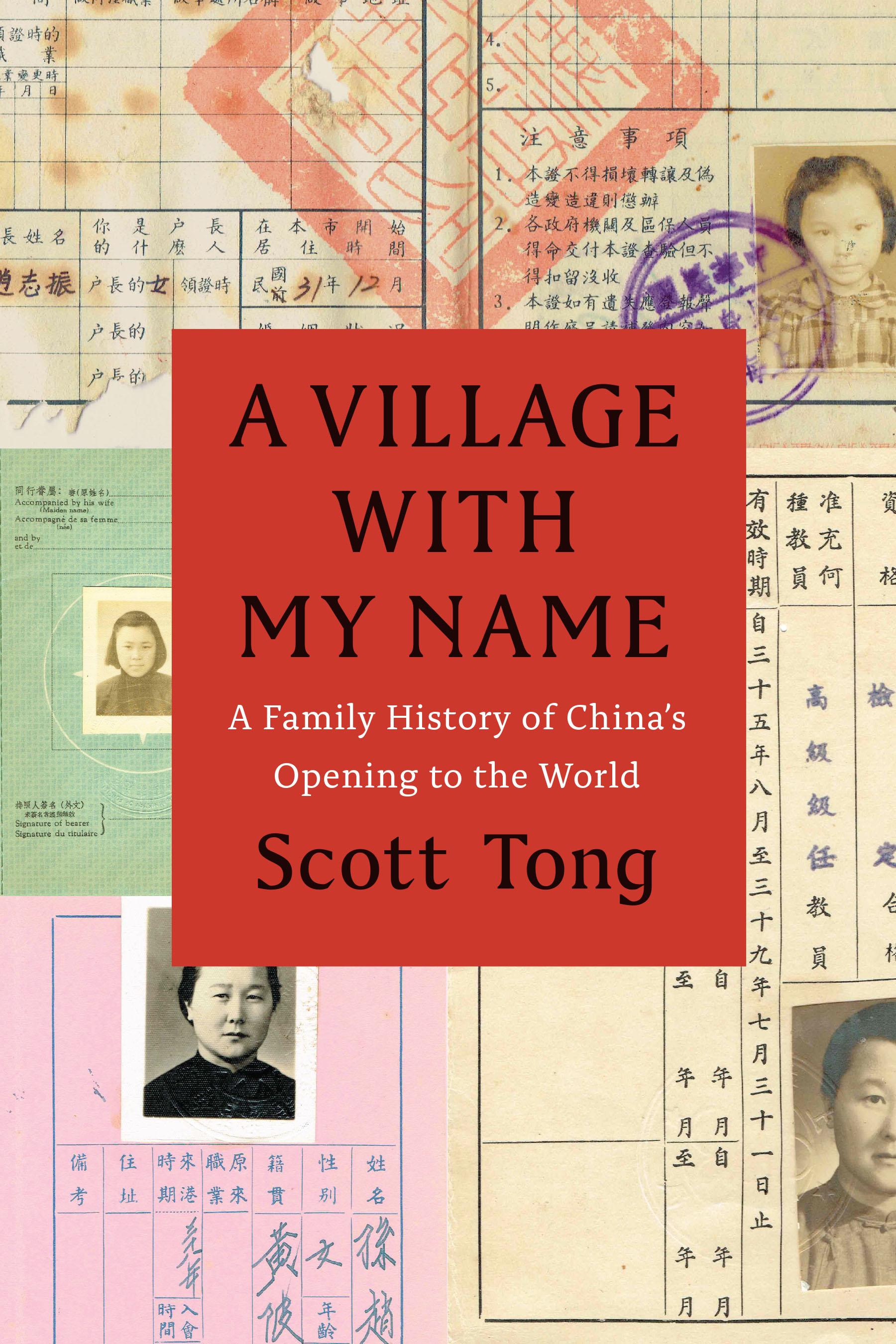 Globalization drifts in and out of fashion, often quickly and without warning. As I write this in early 2017, we are living in quite a moment here. The modern connected age of open borders and markets is being vilified in ways I’ve not seen in my adult life. Raising drawbridges appears on the ballot wherever I look, and in the States, the handy new epithet is “globalist.” Where this all leads is impossible to know, and in any event I’m not in the predicting business (there are books and investment advisors for that kind of thing). But one thing is clear: much of the angst, ambivalence, and outright hostility toward today’s interlinked world has to do with China.

Without question, the mainland has benefited from global interconnections, paradoxically because its workers have been poor for so long and thus willing to work for what you and I consider peanuts. It seems to have happened quickly. China frequently is cast as a newcomer powerhouse to the top division, emerging out of nowhere. You know the framing of Instant China: Mao dies in the mid- 1970s, Deng Xiaoping takes over soon after, and the story starts there. Anything relevant is After Deng, AD.

Instant China makes for snappy, compelling stories. If you’re reading this, there’s a reasonable chance that you, like me, have parachuted into the mainland for a few days and heard a memorable life story of a cabbie, bond trader, or grubby dumpling seller. That person’s fortunes turned dramatically after Deng’s policy reforms, known as “reform and opening,” or gaige kaifang. Well- intended mainlanders can gaige kaifang you into submission: Gaige kaifang delivered economic and geographic mobility. It allowed for private property, for nobodies to open vegetable stalls and electronic workshops. Gaige kaifang brought meat to the table. The implication is, whatever preceded gaige kaifang was a lengthy period of numbing suffering that amounts to China’s Old Testament: famines, pestilence, floods, wars, colonialism, political witch- hunts, bound feet, and hyperinflation. The fall before the gaige kaifang redemption.

It’s a very clean story I myself told at times on the radio. My first big profile story in 2005 was of a poor, barely literate farmer in the western province of Sichuan. Mr. Xu, a sinewy man with a deep outdoor laborer’s tan and a crewcut, hailed from the village of Guang’an, the home of Deng Xiaoping. He sought his fortunes in the metropolis of Chongqing, finding grunt work as a porter; he roped people’s goods and boxes to a bamboo stick slung across his shoulders, carrying them to the appointed destination for a negotiated fee. Part human, part mule. He slept in a drafty group house in a shantytown, on the bottom level of a barracks- style bunk bed for twenty. I joined him on a return trip home to his village. Suddenly, Mr. Xu transformed into Big Man on Campus, the self- made tale of a village boy who went to the big city and made good. Mr. Xu used his savings to build the tallest house in the village. Stopping at a neighbor’s house for lunch, he caught me admiring a gigantic wok in the kitchen, perhaps four feet across. Mr. Xu pointed at it and declared: “Mine’s bigger.”

This telling serves multiple constituencies. For the ruling Communist Party in desperate search of legitimacy, it undergirds the essential founding myth that an economic miracle occurred on its watch. For international reporters, it provides a clean narrative to make sense of a big, chaotic place. But I am not so sure now. It’s like taking a snapshot of a flower with a closeup fish- eye lens, blurring the background. The picture is devoid of context.

There is a phrase that captures this context- less view of China, a phrase I’ve appropriated from a global banker and author named Graham Jeal: skyscraper syndrome. Wowed by a masculine highrise, trophy bullet train, nineteen- course feast, or airport auto- flush toilet, an observer looks at China and vacates rational thought. He or she moves on to a series of regrettable business or personal decisions, and returns home convinced the mainland has taken a controlling stake in the universe. China is, well, different. Eventually for those who stay, the fog begins to lift. The toilets in the trophy high- rises aren’t fixed quite right. The buildings stay vacant, and the workers inside underperform. A more nuanced picture starts to come into view.

At this moment in time, it’s worth looking at China and its place in the world with fresh eyes. A Village with My Name is my own pursuit of a useful historical perspective, a project that began after I returned to the United States in 2010. It’s a tricky undertaking, given there is so much history to consider. “The Chinese people have five thousand years of history,” one of my first Mandarin teachers lectured to me in 1980— a line that has been repeated to me five thousand times since. But how can a new story about China be so very old? How relevant is all that mind- numbing history of emperors and dynasties to today? Where did today’s China really come from?

My suggestion here— which, to be honest, reflects the thinking of many intellectual historians— is that critical roots go back to a prior heyday of globalization: the century before World War I. Going back at least to the nineteenth century, self- interested Chinese (and foreign) nationals took the seeds of modernity and sprinkled them on mainland soil. As it turns out, some of these first movers are on my family tree. If you know anything about China’s recent past, you know that only some people were rewarded for looking outward. Others paid a heavy price when political winds changed and a newly xenophobic China slammed its doors to the world.

The upshot of that decision was to delay progress. Fundamentally, China’s is a story of coming late to modernity. Many Chinese have told me: We came late to the industrial revolution, late to the digital revolution. We are not going to miss the next one.

Reprinted with permission from A VILLAGE WITH MY NAME. Published by the University of Chicago Press. © 2017 Scott Tong. All rights reserved