I commute to the city every day, and as I walk to my office from Ogilvie Center I'm always amused by what's written on the Civic Opera sign that hangs over Madison St. My question is, how in the world do they change that sign every week?

The Civic Opera House, where the Lyric Opera performs, has two 5-by-12-foot marquees that stick out from on the Washington and Madison sides between the 3rd and 4th floors.

The Lyric uses them to promote upcoming shows with clever slogans that get changed every week or so (and are a favorite of opera fans on social media). Our first thought was that they used a long pole or a cherry picker to change the letters from the outside, but they actually do it from inside the marquees!

Lyric’s marketing team works together to write the messages. There are, of course, some space limitations, so the messages have to be short and sweet – think tweet-level brevity – 13 characters per line, including spaces. The two marquees have two sides each, and the Lyric says most of the time each of the four signs has different copy.

Once the copy is written, the marketing team puts in a request to the Lyric’s electricians for a sign change. The electricians grab the necessary letters from a closet – for font fanatics, the Lyric says the letters are in the Verlag family – and wheel them over to the marquee.

Unfortunately our cameras were not allowed to follow the crew inside the marquee due to union regulations, but we did get to see the switch from outside, where they climb down inside the marquee from the top. They’ve only got a few feet between the two marquee faces so it’s a snug fit, but once they’re in there, the process is pretty fast – it only took about 15 minutes for them to remove the old message and put up the new message they created just for us. 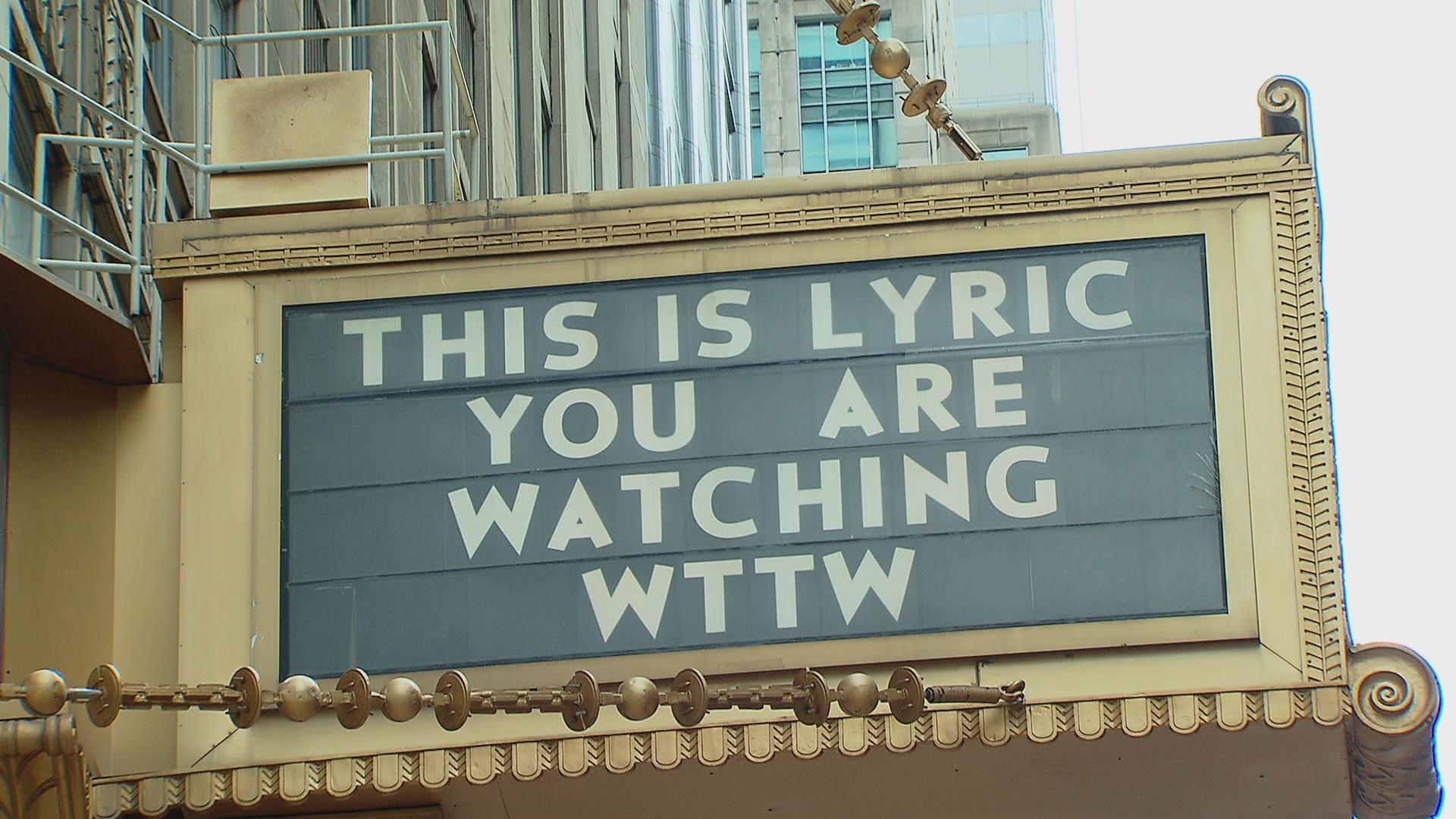 I was given a scarf that replicates the artwork on the Lyric Opera’s fire curtain. Recently while wearing the scarf I was in the Merchandise Mart and noticed that the fresco in the lobby was remarkably similar to the art on the Lyric curtain. Would these have been done by the same artist?

Our viewer has a good eye! The Lyric’s fire curtain and the Merchandise Mart’s lobby murals were both the work of artist Jules Guerin. Guerin was a frequent collaborator with the architectural firm Graham, Anderson, Probst & White, which designed both the 1929 Civic Opera building and the 1930 Merchandise Mart. 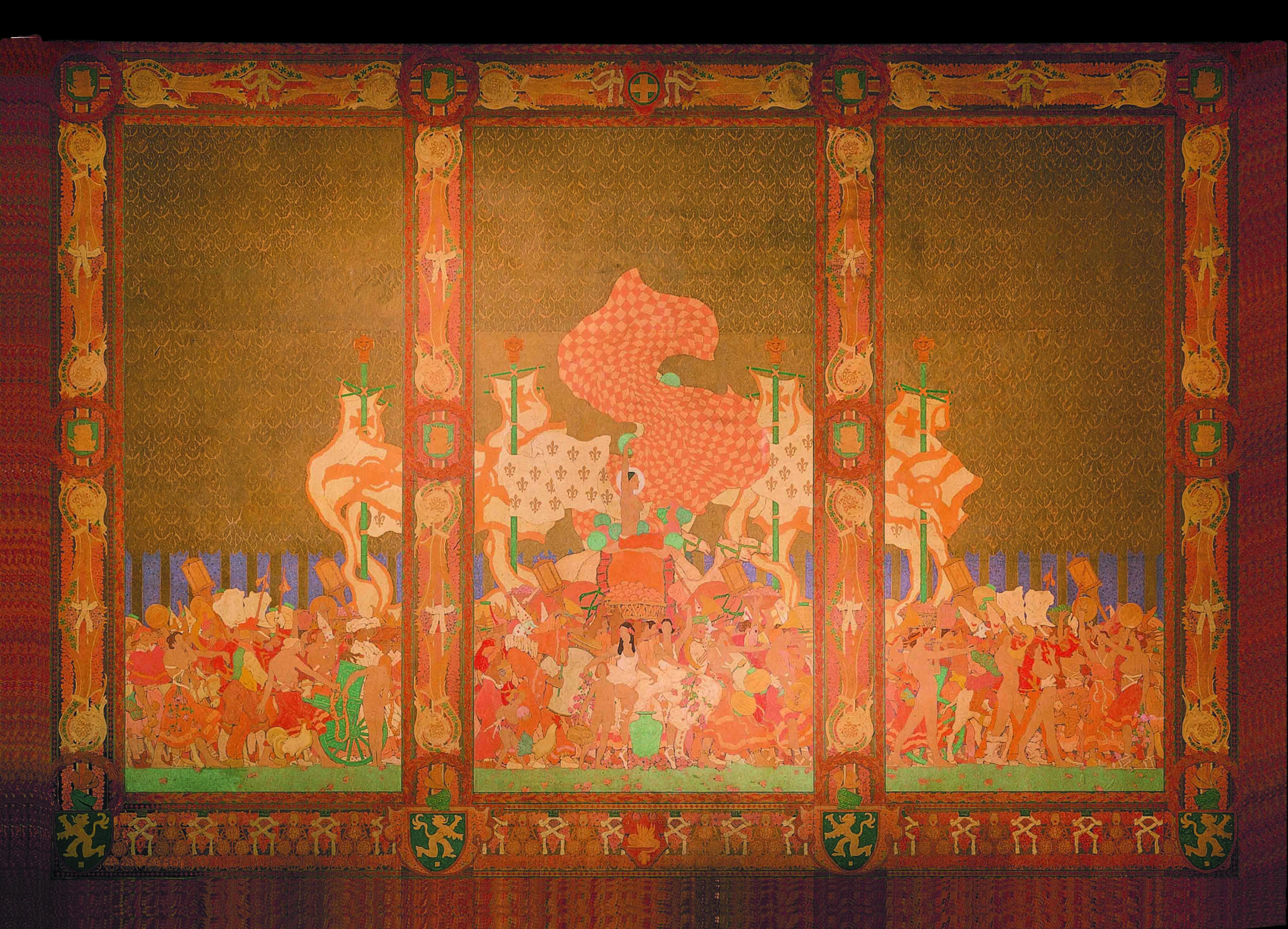 Guerin’s fire curtain at the Lyric depicts a parade scene from the opera Aida, but according to art historian Mary Lackritz Gray, other figures in the work suggest characters from other operas, such as Carmen, Madama Butterfly and Pagliacci. The Aida theme is especially appropriate because it was the first opera staged at the Civic Opera House when it opened on Nov. 4, 1929.

The 35-by-50-foot fire curtain is really more like a steel wall. It drops down from above to provide a barrier between the stage and the auditorium in the event of a fire on stage, protecting the audience from the smoke and heat while the auditorium is evacuated. It’s not only used for fire – the Lyric says that it’s used for rehearsals and is down during other events in the house, and some directors use it in their shows.

Chicago history buffs will remember that the tragic 1903 Iroquois Theater fire was so deadly in part because the fire curtain got stuck halfway down.

In the main lobby the Merchandise Mart, you have to look up to see Guerin’s 17 panels between the pillars of the colonnade. The oil-on-canvas panels are collectively titled “Merchandise around the World.” Each depicts a market scene from a different part of the world, including a silk and pottery market in Japan, camels carrying cotton in Egypt, and sleighs transporting furs in Russia. The panels were painstakingly restored in 2014 by the Chicago Conservation Center.

The artist, Guerin, was born in St. Louis, but he came to Chicago and began his artistic education at the age of 14 in 1880. He made a career as an architectural delineator and illustrator, including illustrations for the 1909 Plan of Chicago, aka the Burnham Plan, which are probably his best-known work. He has murals in buildings across the country, including the murals he created for the Lincoln Memorial in Washington D.C. 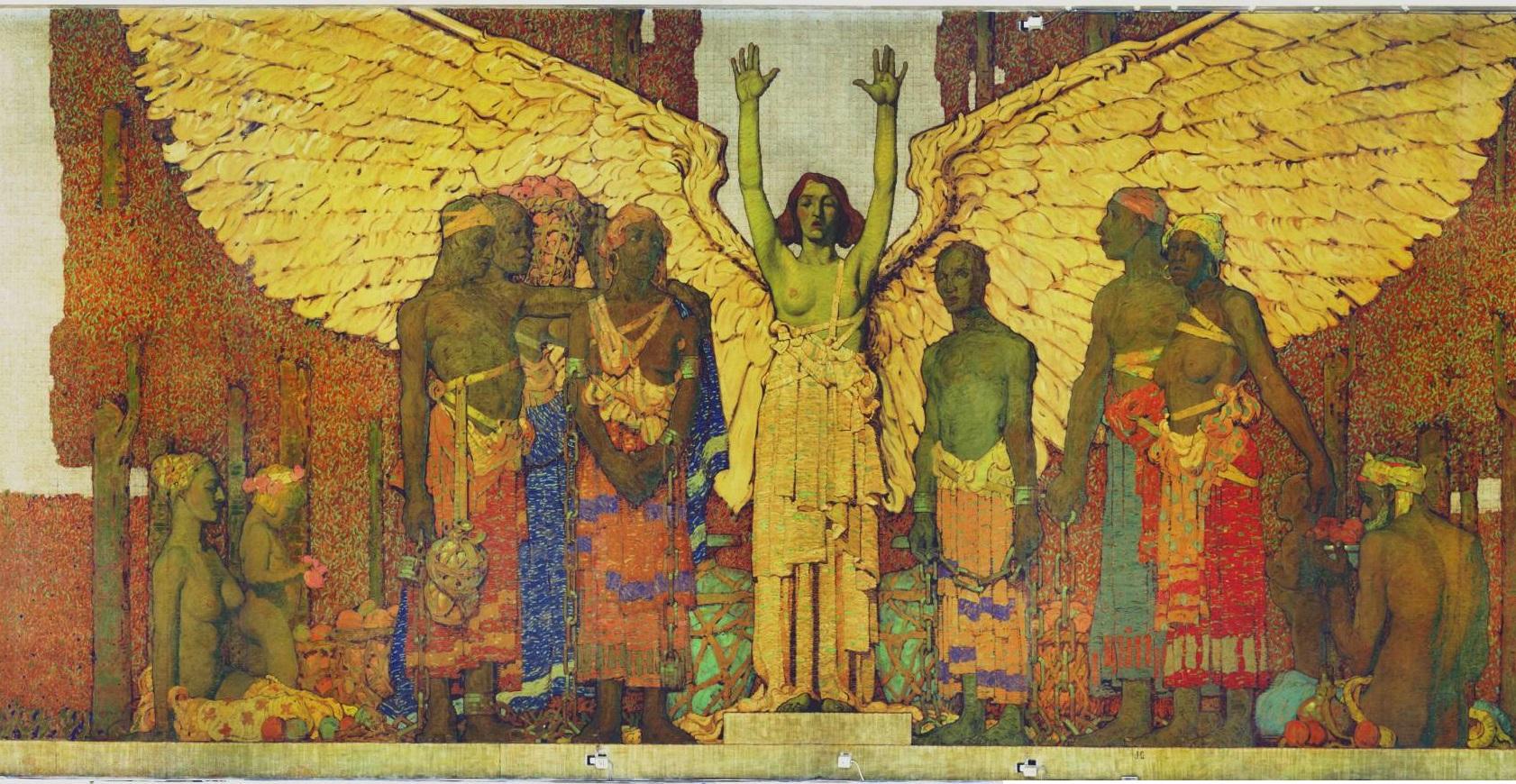