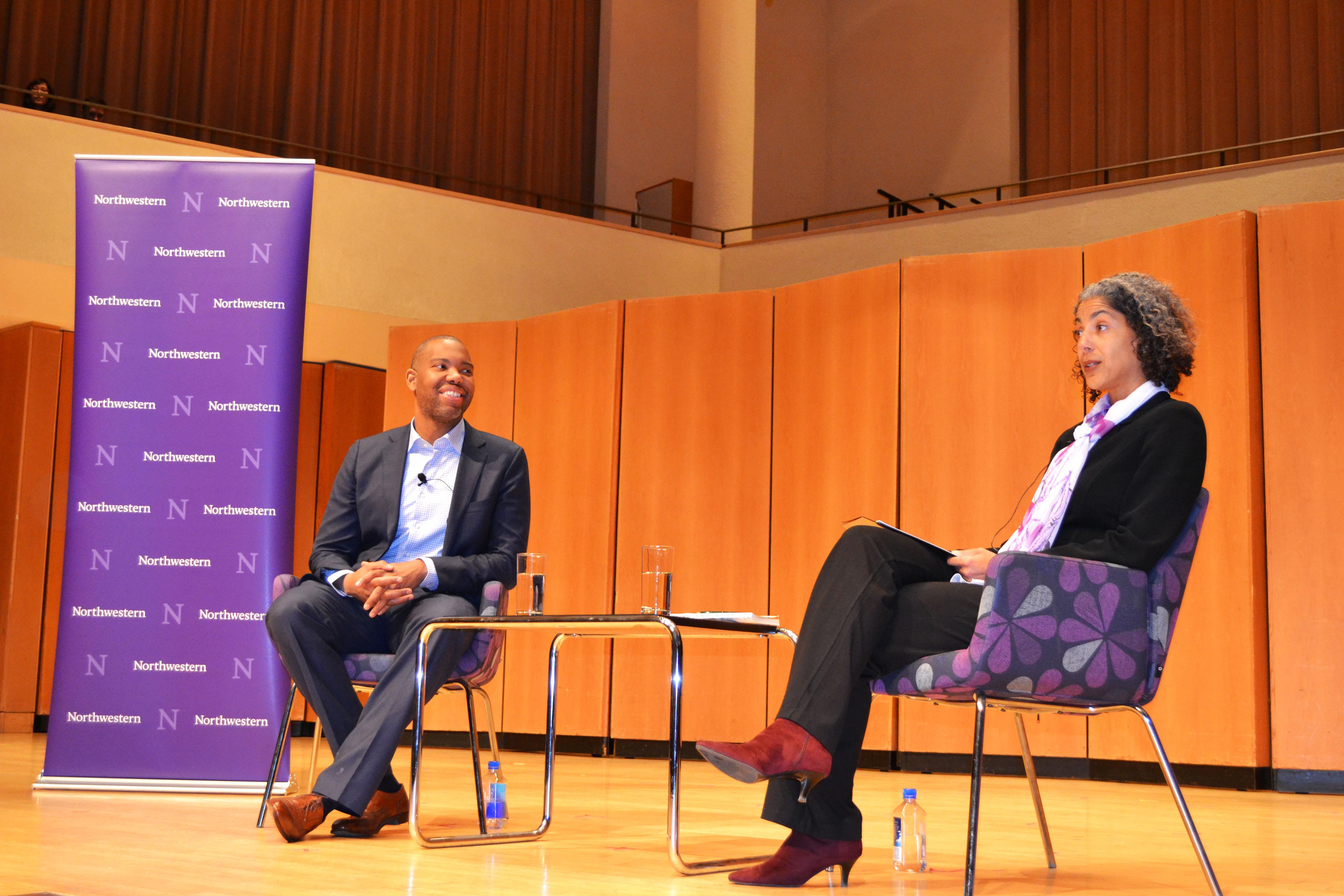 The critical lens that propelled journalist and author Ta-Nehisi Coates into a household name was on display Tuesday night during a sold-out discussion at Northwestern University’s Pick-Staiger Concert Hall.

“I don’t come to literature for hope, I come to it for truth,” Coates said to the crowd of more than 1,000 Northwestern faculty, students and staff.

Moderator Mary Pattillo, a Northwestern professor of sociology and African-American studies, agreed the work of sociologists isn't necessarily uplifting. “Oh gosh, we’re depressing,” she said to a burst of laughter.

Coates reminded the audience, many of whom said prior to the event they were hoping to be inspired in a time of controversial politics, that “writers are not pastors.” He likened himself to a scientist studying climate change, wishing his work wasn’t actually true.

However, the standing ovation at the conclusion of the 90-minute conversation reflected the value of Coates’ insight on various topics, including Chicago as an epicenter for black culture and history.

“If you love black people, how can you not love Chicago?” Coates smiled after Pattillo said she’d heard it was his favorite city. “You can feel the spirit ... here it’s returning to something that’s in your bones.”

The writer, a national correspondent for The Atlantic, has personal ties to the city he referred to as the “capital of black America.” In one of his first widely circulated articles, “The Case for Reparations,” he highlights the way Chicago’s labor and housing policies excluded blacks in the early 21st century as case studies for his argument. Some of those interviewed for the piece were in attendance Tuesday. 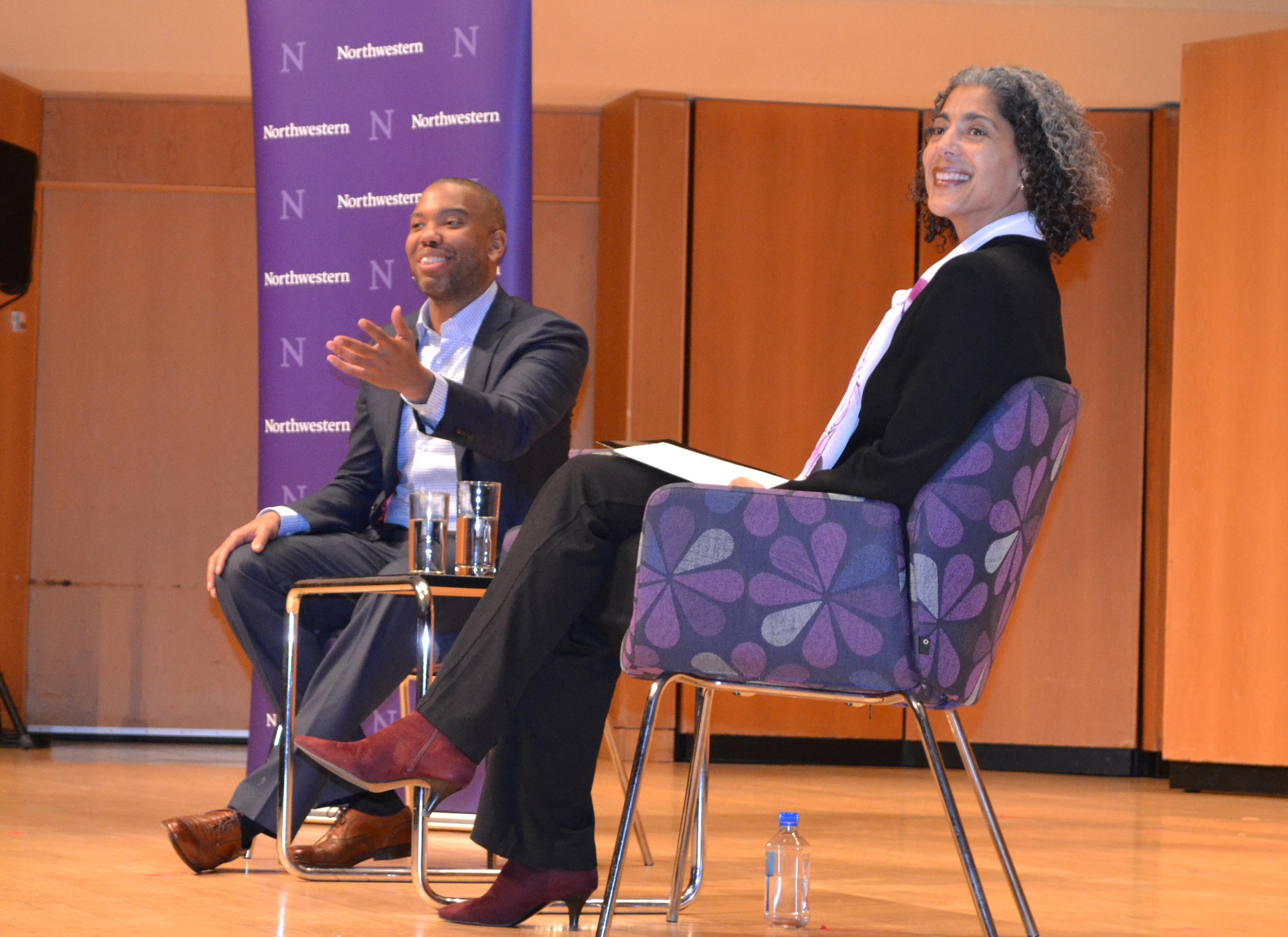 Ta-Nehisi Coates waves to individuals who he interviewed for his seminal piece, The Case for Reparations, who were in the audience at Tuesday night's discussion with professor Mary Pattillo. (Maya Miller / Chicago Tonight)

A report released Monday by the Center for Enterprise Development found the racial wealth gap in Chicago is significantly worse than the national average.

“When I think about Chicago I think about home,” the Baltimore native and current New York resident said. “You guys have so much, so much culture, so much history … which doesn’t mean everything good about being black. If you want to experience pure racism, you come here too.”

For many in the audience, this sentiment rang true.

Aireale Rodgers, a Northwestern University alumnus and the current program coordinator at the office of inclusion and diversity for the graduate school, spoke to Chicago Tonight earlier in the evening about the role the city has played in defining her perspective on education.

“I was in the School of Education and Social Policy, so it was both empowering and a little bit troubling to study the community that I’m from,” said Rodgers, who was born and raised in South Shore and was clutching both of Coates’ books and a Sharpie from her seat in the first row.

In some senses, Coates’ work is now building upon the city’s storied history. When Rodgers spent time teaching at Foundations College Prep in the Roseland community, she weaved clips from “Between the World and Me” into her advisory group’s curriculum. The book is written as a letter to Coates’ adolescent son on navigating the nuances of identity as a black American.

“He tells stories in a way that’s both elegant and accessible,” Rodgers said. “He reaches many audiences, and is able to hold people accountable, challenge people and inspire people.”

One of the topics of conversation the 2015 book inspired was the response it got from white Americans. New York Times columnist David Brooks’ article “Listening to Ta-Nehisi Coates While White” prompted an array of criticism.

“Look, I’m happy Brooks read my book ... I’m happy they’re reading my book,” Coates said. “But, a book that started in a place about my friend being killed ended up being what white people think about it.”

For Emily Grayson, who was seeing Coates for the second time, his work has served as an introduction for how to begin dialogue about race as a white, middle-aged parent.

“I was noticing in my life that I was feeling challenged when I was talking about issues of race,” Grayson told Chicago Tonight before Coates spoke. She started a book club a year and a half ago that addresses race in the U.S. “I felt stilted, uneducated and like I was constantly coming up against my own internalized racism. I felt I didn’t have the skills to move beyond that, yet and I wanted to have them.”

A staff member and educator at NU’s Feinberg School of Medicine, Grayson’s book club began with “Between the World and Me.”

Coates asserted Tuesday that he is in no way a spokesperson for the topic of race, and doesn’t have the answers to many questions that have been asked of him over the past few years. Rather, he feels he’s communicating his own thoughts through a medium he identified as his calling.

“People might decide this race stuff is passé, there might not be an audience for it,” Coates said. “But I have to keep writing it ... to fulfill my calling.”

“Ninety-nine percent of the time nothing’s going to happen. People were speaking out against slavery for 250 years and nothing happened. There’s got to be something else, something internal that says ‘if I don’t say this, I’m going to slit my throat.’”

Throughout the conversation, Pattillo and Coates spoke about the difficulties of guiding black children through the current racial landscape. For Coates, the fact the word race is even used to describe African-American individuals is a telling sign of its worried state.

“Race is depressing, being a people is not,” Coates said. “I want what made me become a race to go away, but I love being a people.”

As to the difficulty of being both carefree and “woke” – slang for conscious – Coates offered a question of his own.

“How do you get someone to act safely in Baltimore, Harlem, in the South and West Sides of Chicago, and yet (act) differently and openly in another setting?”

These are the types of questions Coates wants to continue asking, exploring the concerns of “people living under the boot.” However, the growing spotlight surrounding his work can make that a difficult task.

“There’s something beautiful about the solitude, that’s when the deep thinking happens,” Coates said. “I have to get back to that.”

While he has struggled to find space for himself, he hopes to create space for black writers to produce their own work.

“What we need is more books, more ‘Between the World and Me,’” Coates said. “Literature comes from the specific, we need more people writing from their own experiences.”

Coates recently published “My President Was Black” – a piece he worked on closely with former President Barack Obama, and is currently working on a comic book in partnership with Marvel called “Black Panther” while on leave from The Atlantic. His next long-form project aims to piece together some of the entries he’s written over the past decade to provide perspective on the current political and racial landscape in the U.S.

“A historian will look back 100 years ago and say, ‘Makes sense,’” Coates said with regard to the nomination of President Donald Trump.

Though Coates may not have served up optimism to his audience, he left the crowd buzzing over his unique perspective on saturated issues.

“That was powerful,” said David Gernon, a junior at the Medill School of Journalism. 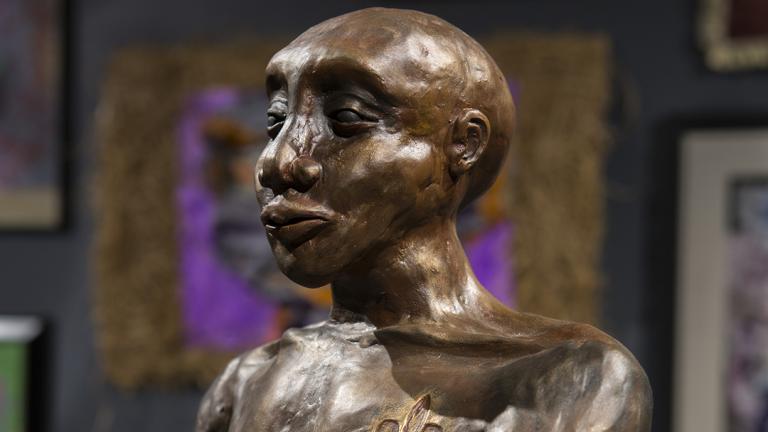 Jan. 31: Underway at the Museum of Science and Industry is the longest-running exhibition of African-American art in the country. Learn more about the museum’s program and the origins of Black History Month. 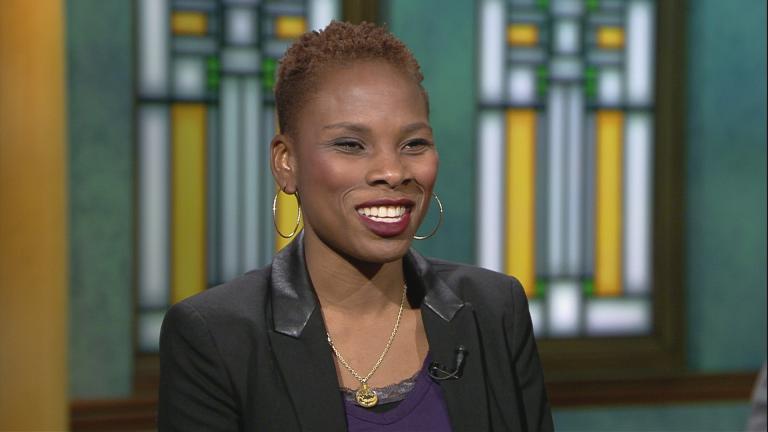 Jan. 30: A Chicago author’s new book lays out the case that we can all do better.