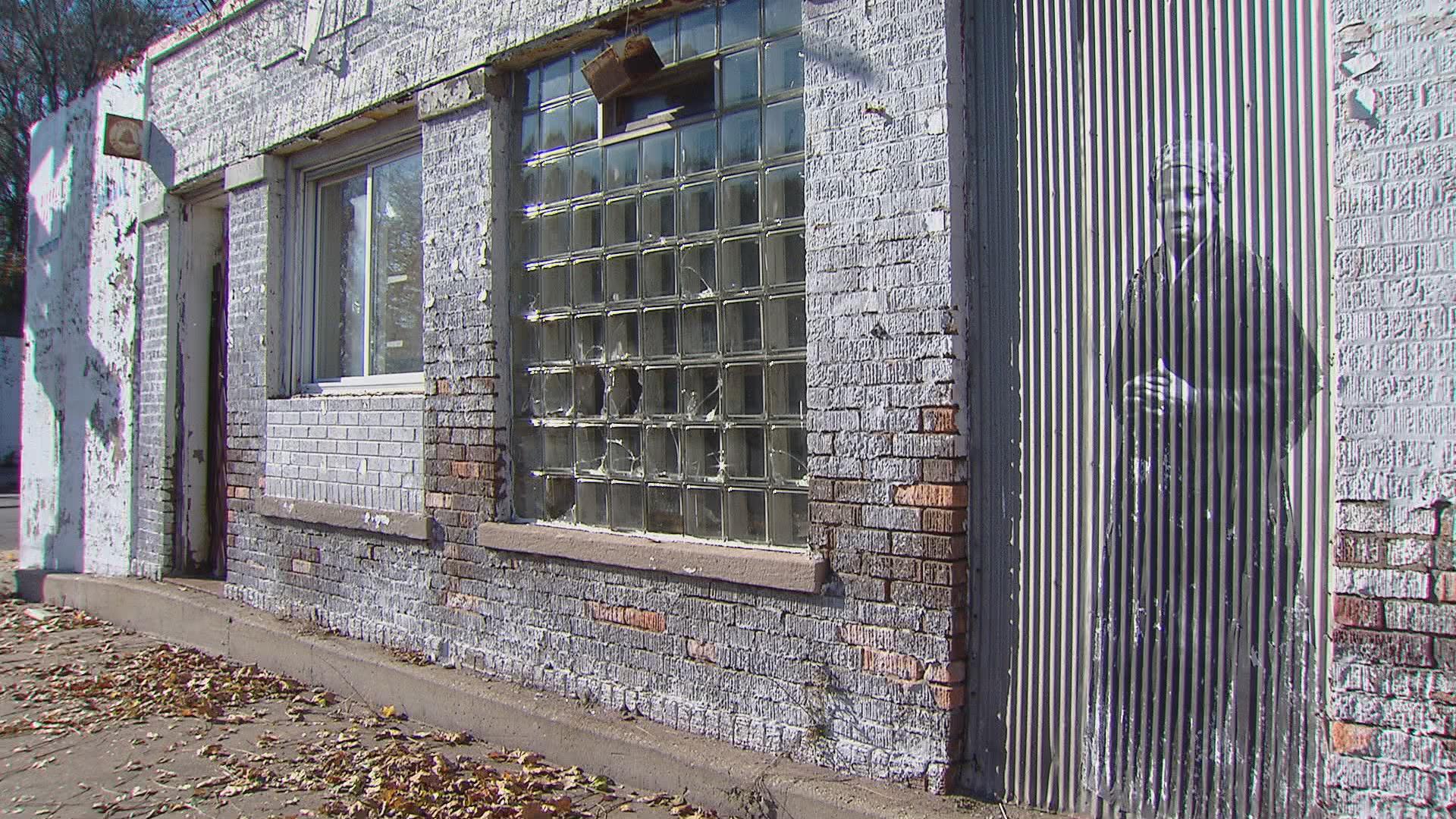 A viewer has memories of a space-themed South Side park on an island that has since disappeared. Was this space-age park just a figment of a child’s imagination?

Geoffrey Baer has the answer to this, and viewer questions about ghostly paper images haunting a South Side neighborhood and the storied flow of Chicago’s water supply.

There is a stunning lifelike full body portrait of Harriet Tubman outside on the corner of 111th and Cottage Grove, right across the street from the original Pullman Train car factory. The image is a familiar one. Who put Harriet Tubman there and why?

A life-size Harriet Tubman does indeed stand sentinel at the corner of 111th and Cottage Grove pasted to a vacant storefront. Tubman, of course, was the abolitionist, leader of the Underground Railroad and Union Army spy.

Local artist and Pullman resident JB Daniel adhered a photo cutout of an 1885 portrait of Tubman with wheat paste, which, you might remember from elementary school art projects, is a mixture of flour, water and sugar.

Daniel stuck photo cutouts like the one of Tubman all over the Pullman neighborhood. He came up with the idea as the National Park Service was preparing to designate Pullman a National Monument in 2015. He felt that the real significance of Pullman was the labor movement and the workers who lived there, so he spent the winter negotiating with the owners and tenants of the various sites. 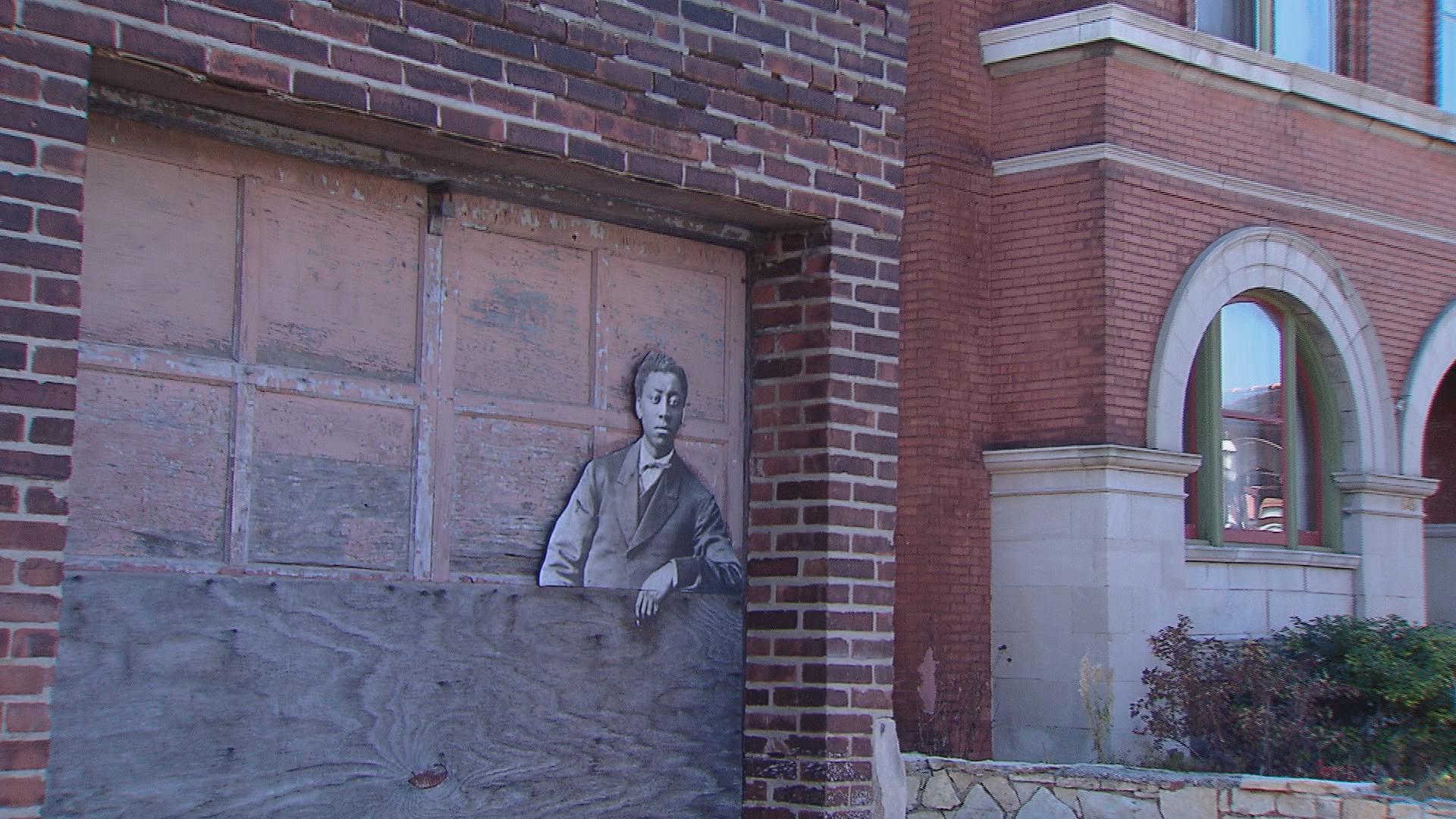 The 15 or so photos make up the project Daniel calls “LaborPaste.” He says he pasted these photos in unexpected places throughout the neighborhood in the hopes of sparking curiosity among passers-by. That’s why he didn’t put names or labels on them – he wants people to do the research and discover the history for themselves.

Daniel is also responsible for the interactive chalkboard installation in Pullman titled “Community” that seeks input from local residents on what they want their community to be. He also runs a visiting artist residency in Pullman.

Daniel is letting the installations naturally fade and disintegrate with the weather – some of them are already gone – so now’s the time to head to Pullman to see them before winter sets in.

What happened to Daniel Burnham Park? It was located in Washington Park I think and in the ‘70s my dad would take me there. It was on a lagoon. Schools did trips there too. There was a sightseeing tower, a maze with a pyramid in the center, giant slide and themed play areas—one was a futuristic spaceship area and another was like a treehouse/frontier trail.

This question stumped us at first, because there is still very much a Burnham Park that runs the length of the south lakefront. We asked Park District historian Julia Bachrach if this rang a bell, and she said it wasn’t Burnham Park, but Bynum Island that our viewer was remembering.

The Marshall F. Bynum Adventure Playland was a short-lived adventure park that people from the area who grew up in the ‘70s will recall fondly. It was situated on a six-acre island in the middle of a large lagoon in Washington Park’s southern half, called the Mere.

Bynum Adventure Playland was designed by park district landscape architects as a much more avant-garde and colorful alternative to the swings and slides that were playground standards at the time.

As our viewer mentions, it featured mazes, giant slides, a moonscape area, planet-like climbing equipment, zip lines, a lagoon stocked with fish, and even giant aluminum Lincoln Logs to build with. A concrete amphitheater offered a shady place for parents to sit while their children played.

But the playground came at a price: $750,000 – way more than the average park construction cost at the time, according to a Chicago Tribune report. Adding to the cost of running Bynum Adventure Playland were over 20 recreational leaders.

By the late 1980s, the equipment was badly deteriorating and in 1990, everything but the stone amphitheater was torn down – but that wasn’t the end of play on Bynum Island. The Park District still runs special events and programs there, including family camping and fishing programs, during the summer. 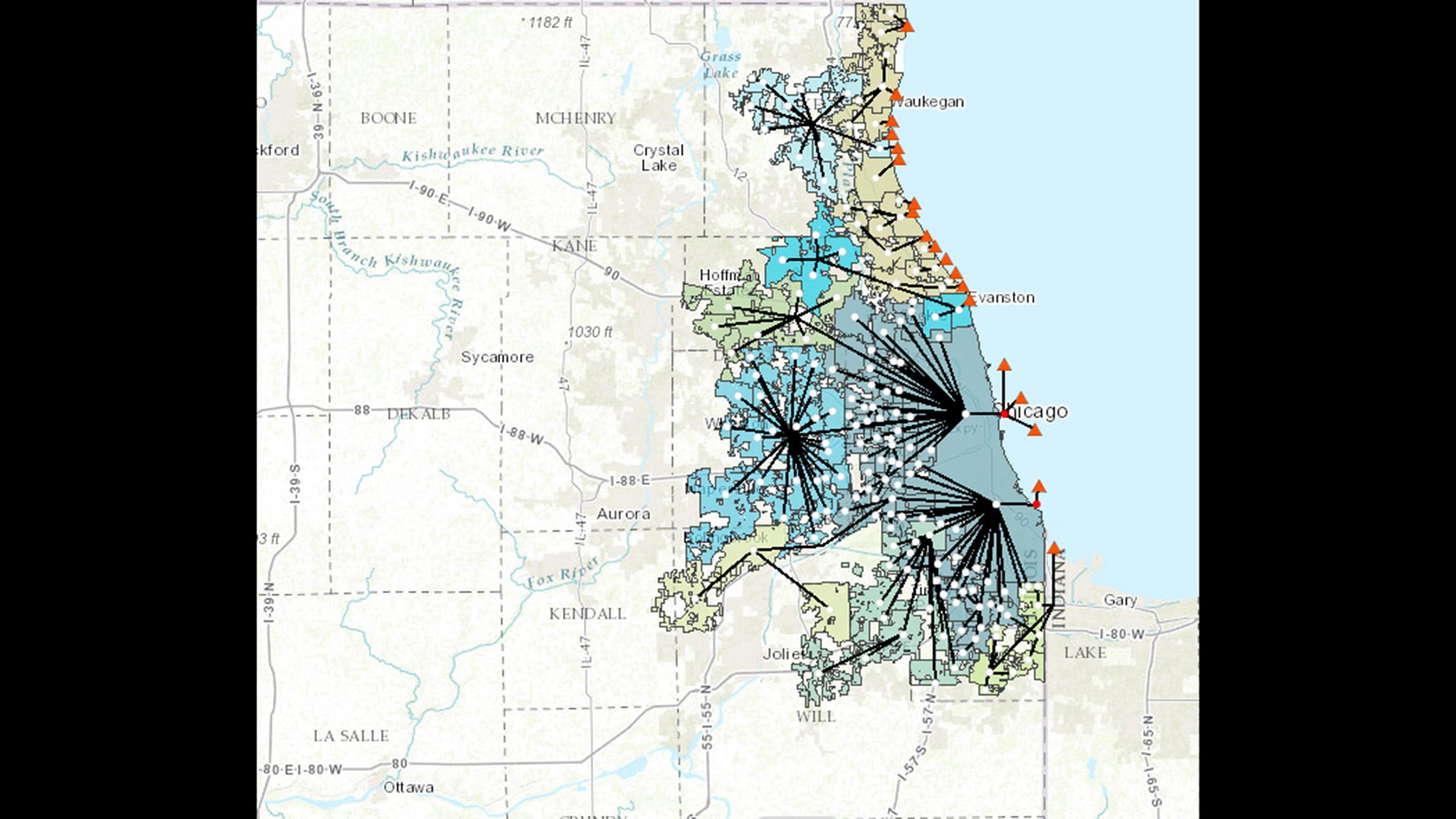 To understand this question you have to start with a fact of Chicago geography that most Chicagoans are completely unaware of: Chicago stands at the edge of a continental divide. It’s a low ridge that runs north-south, parallel to the Lake Michigan shore, just west of the city through suburbs like Oak Park and Lyons.

Prior to 1900, wastewater and rainwater that fell on the Chicago side found its way into the Chicago River and from there into Lake Michigan. The rain and wastewater on the other side flowed into the Mississippi and down to the Gulf of Mexico. That means Chicago and the North Shore suburbs were in the Great Lakes watershed and the suburbs to the west were in the Mississippi River watershed. (For sticklers, yes, it’s actually a sub-continental divide because water on both sides ends up in the Atlantic.) 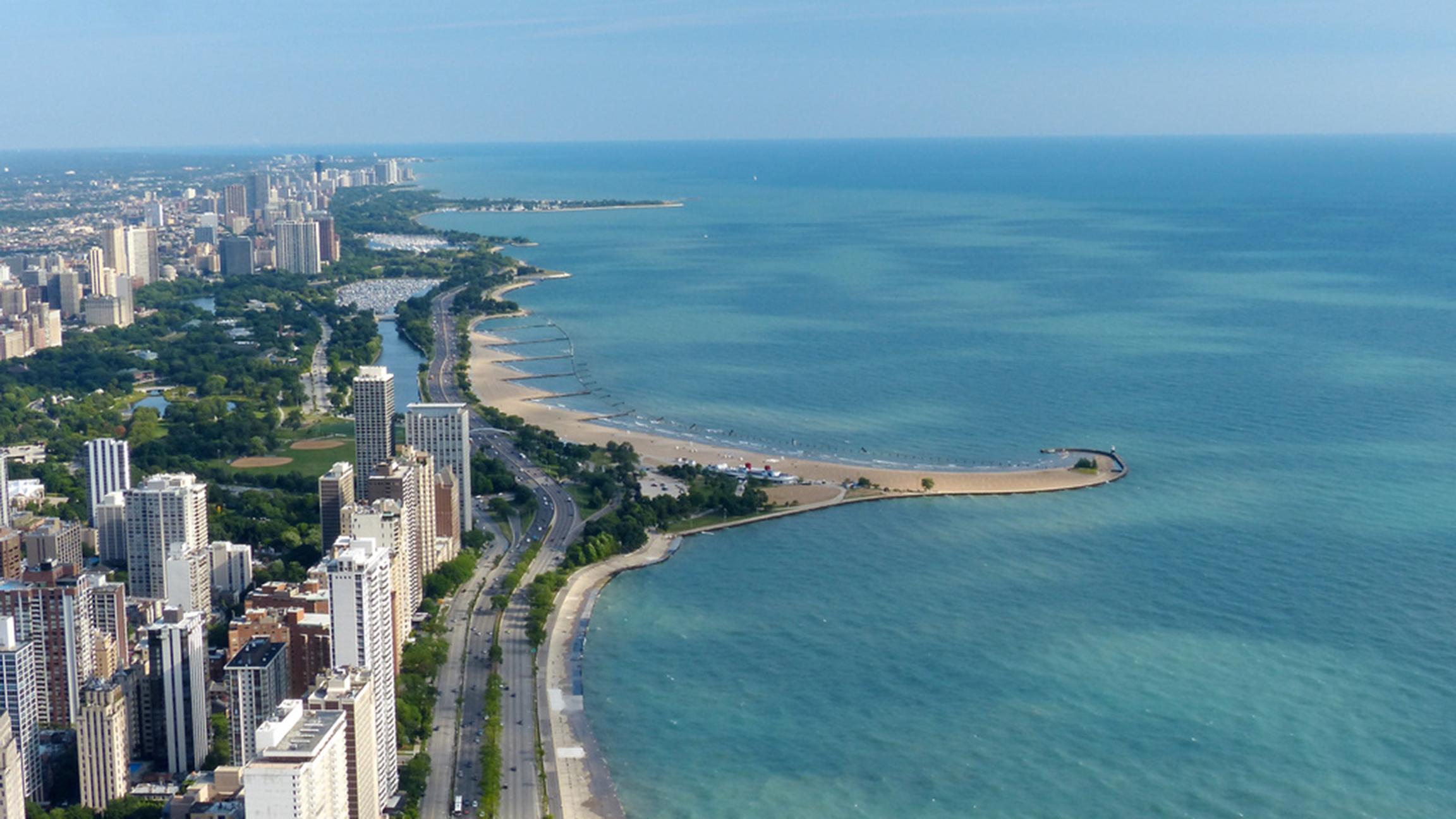 Other Great Lakes states believed this meant Illinois shouldn’t be allowed to use Lake Michigan water, or at least not much. The Supreme Court eventually settled the matter, permitting Illinois to divert water from the Great Lakes watershed at a stingy 3,200 cubic feet-per-second. And that’s not just water we draw from the lake, but also rainwater that falls in Illinois because storm sewers divert water down the Mississippi.

That means that we in Illinois have a special obligation to be good stewards of our water, because we take it out of the Great Lakes and don’t put it back in.

So that’s why lakefront cities and towns like Chicago, Evanston and Highland Park sell some of their water to suburbs west of the divide. Still, those communities can’t simply buy it and start piping it in – they have to apply for their allocation through the Illinois Department of Natural Resources, which makes sure that the water will be used as efficiently as possible.

In other Great Lakes states communities outside the watershed are forbidden to access Great Lakes water, although an exception was recently made for Waukesha, Wisconsin, because their local supply was polluted as we reported on Chicago Tonight. 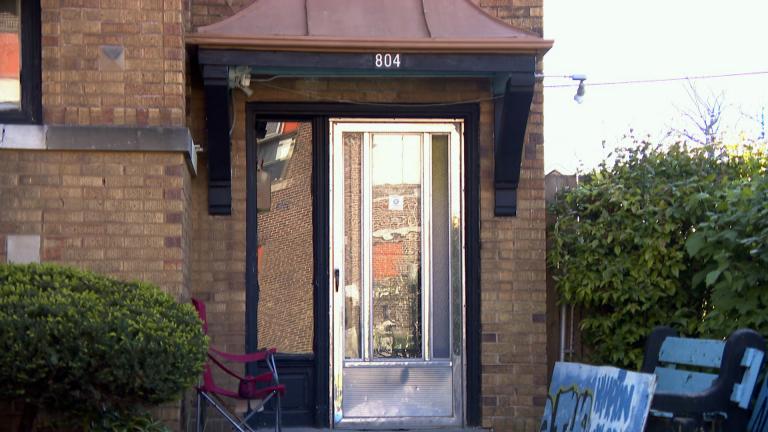