"Downton Abbey" may be ending this year, but the costumes aren't going anywhere.

You'll be able to catch many of those fashionable frocks in Chicago starting Tuesday, with "Dressing Downton," an exhibit at the Richard H. Driehaus Museum showcasing over 35 costumes from the British TV series, now in its sixth and final season.

The lavish costumes make a perfect fit for the museum's interior–which at one time made up the drawing rooms, living rooms, libraries and bedrooms of the affluent Nickerson and Fisher families of Chicago. According to the museum, the stories of the Fishers in particular, an urban family of "new money" who lived in the house from 1900 to 1916, create a contrast to the aristocratic lifestyle depicted in the TV series of the Crawley family in the British countryside.

The museum also offers an optional tea service to really round out the Downton experience. Tickets include seasonal scones and cake breads, tea sandwiches and a variety of sweets as well as a selection of two specialty teas locally sourced from Chicago purveyor, Rare Tea Cellars. Tea is $55 ($30 for children ages 12 and under) and advance reservations are recommended.

Brandis Friedman: The music evokes a land far away in distance and time.

Anita Rogers, “Downton Abbey” fan: Americans like that different kind of life that we can’t really relate to so much, so different from the way we are.

BF: But the fashions brought to life in this exhibit at the Driehaus Museum help tell the story of the aristocratic Crawley family at the fictional Downton Abbey.

Driehaus Musuem director Lise Dube-Scherr believes this historic museum is the perfect setting for such an exhibit. 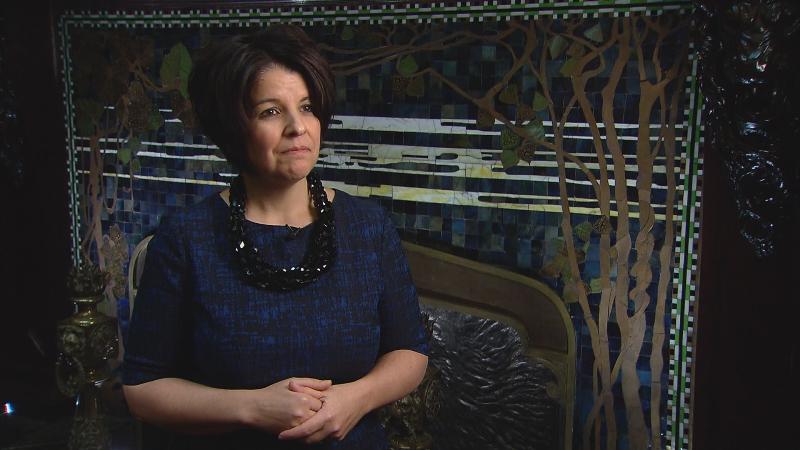 Lise Dube-Scherr Lise Dube-Scherr, Driehaus Museum director: So there's a correlation between the time period. This house is a bit earlier. It's a Gilded Age mansion, and of course, the Crawley family is living in Downton during the early 1900s from 1912 to 1925.

So that actually relates to this house in terms of the family, the second homeowners—the Fisher family. They lived in house from 1900 to 1916. So that's where the overlap comes in terms of connecting the fictional history of "Downton Abbey" with the actual history of the Driehaus Museum and the Nickerson Mansion.

BF: The exhibit, "Dressing Downton," is made of 35 looks from the first four seasons of “Downton Abbey.” Among them, this beaded dress and velvet jacket worn by Lady Grantham (below) for the hospital’s charity concert; this dusty pink beaded evening dress Lady Mary wore to dinner the first time Sir Richard visited Downtown. Both in Season 2, which would’ve been from 1917 to 1920. 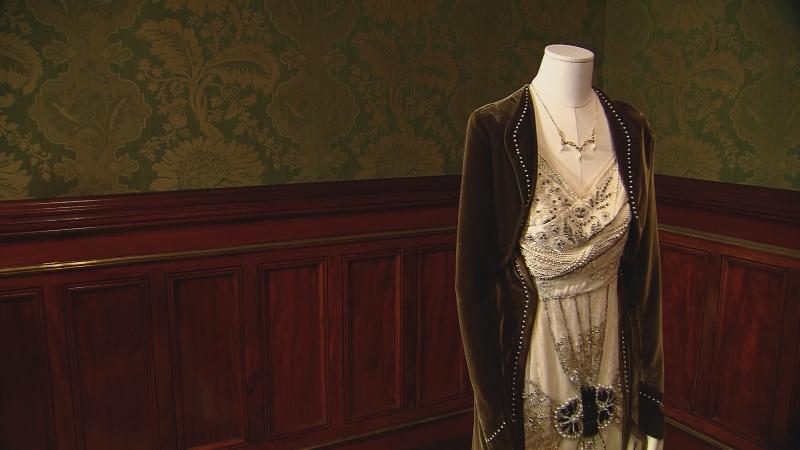 And (below) this pink beaded gown worn by Lady Rose MacClare in Season 4 is showcased next to the tuxedo worn by jazz singer Jack Ross whose mere presence at Downton raised eyebrows upstairs and down. 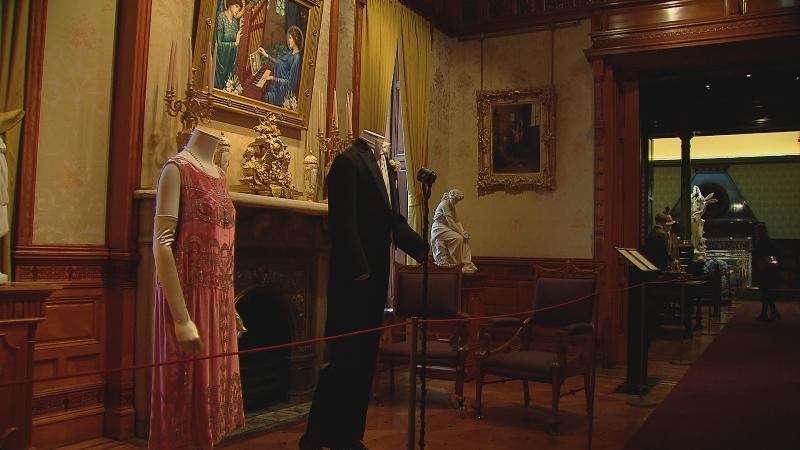 Ruta Saliklis, curator: The garments that emerged in that era of the ‘20s are much looser, they’re straighter, there’s no sleeves, they’re cut differently, and they’re much shorter. So you’re kind of going towards the boyish look and the fashion of the flapper era, and even though the Crawley women would never admit to being flappers, their dresses were certainly reflective of the flapper era.

BF: Those four seasons cover 1913 to 1922 and reflect how the fashions changed with the times.

RS: It changed a great deal, especially for the women because starting in 1912 it’s still the Edwardian era. And women are wearing corsets, they have very high collars, long sleeves, the dresses are long, and you cannot see their shoes and you certainly cannot see their ankles.

And then you get into the era of World War I and initially you don’t see that many changes because they were thinking the war was going to be over soon, but when it dragged on and on, then you start to see that they’re moving toward more practical garments.

BF: Downton’s costume designers searched high and low to find fragments of vintage clothing from the time period or even clothing that just looked like it was from the era.

RS: Sometimes they would even find embroidery on a tablecloth that would have the right type of a design for the era and they could use it to recreate a coat or something, an article of costume where it was used in more of a domestic setting. There still are quite a few examples of vintage fragments of garments that they can find in England and also in the United States.

BF: Though the fashions here focus mostly on the aristocracy, there is a nod to the downstairs staff: the butlers, maids and cooks who kept the house buzzing.

Die-hard Downton fans holding on till the bittersweet end can take still take a bit of the abbey home with them. For the downstairs folks, there are tote bags for the market; cookbooks for the kitchen; and linen water for the laundry. But upstairs some of the finest teas, vintage jewelry and books on society and, of course, fashion.

Not in the gift shot? The DVD of Season 6 for folks who can’t wait to find out what happens in the end.

How would you say the show’s different or changed over those six seasons? 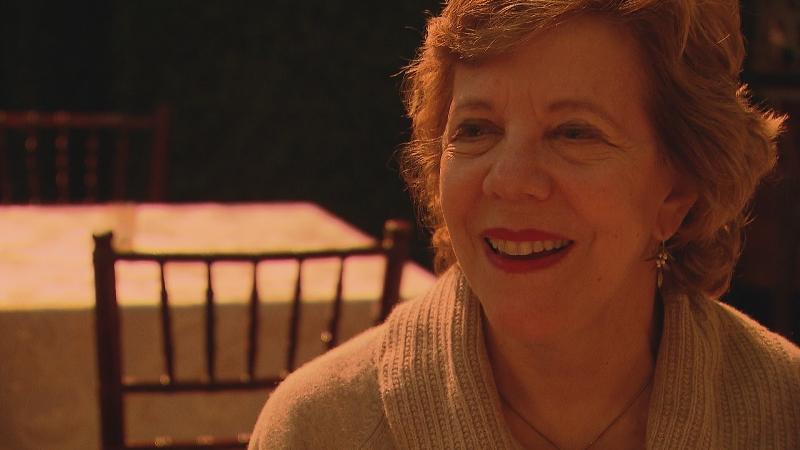 BF: There may be no telling why American viewers have become such big fans of the show, but the museum’s director has a few ideas.

Kay Collins, “Downton Abbey” fan: I love the clothes, I love how the characters have changed, but the character that really sends me is Carson. His voice, just, I adore.

People have a view of Edwardian England that this is incredibly romantic. And, I count myself among those people.

BF: The fashion, the escapism or it could be just because the plotlines—to use a word never uttered at Downton—are just plain old juicy.

The exhibition "Dressing Downton: Changing Fashion for Changing Times" continues through May 29 at the Driehaus Museum. For exhibition hours, tickets and location information, visit the museum's website.

Note: "Dressing Downton" is presented in collaboration with WTTW.