Founded in 1905, the Chicago Defender gave a voice to black Americans during the Jim Crow era and helped along the careers of politicians from JFK to Richard J. Daley.

"Working at the Defender was a transformational experience," Michaeli told "Chicago Tonight" during a phone interview Monday.

He worked at the 110-year-old paper from 1991-'96, after his friend Gordon Mayer – "also a white Jewish University of Chicago graduate" Michaeli notes – said he was leaving the paper to take another job. "I’d never heard of the Defender before," he said. "And Gordon almost certainly told me it was an African-American-owned publication, but that didn’t register as something significant – I just thought some papers have back owners, some have white owners – until the moment I walked in the door and saw that almost everyone else was African-American, and started seeing all the historical artifacts, and the building itself, which is a historic structure.

"That started to tell me the story that the Defender was something special."

Michaeli joins "Chicago Tonight" to talk about his new book.

Read an excerpt from the book, below. 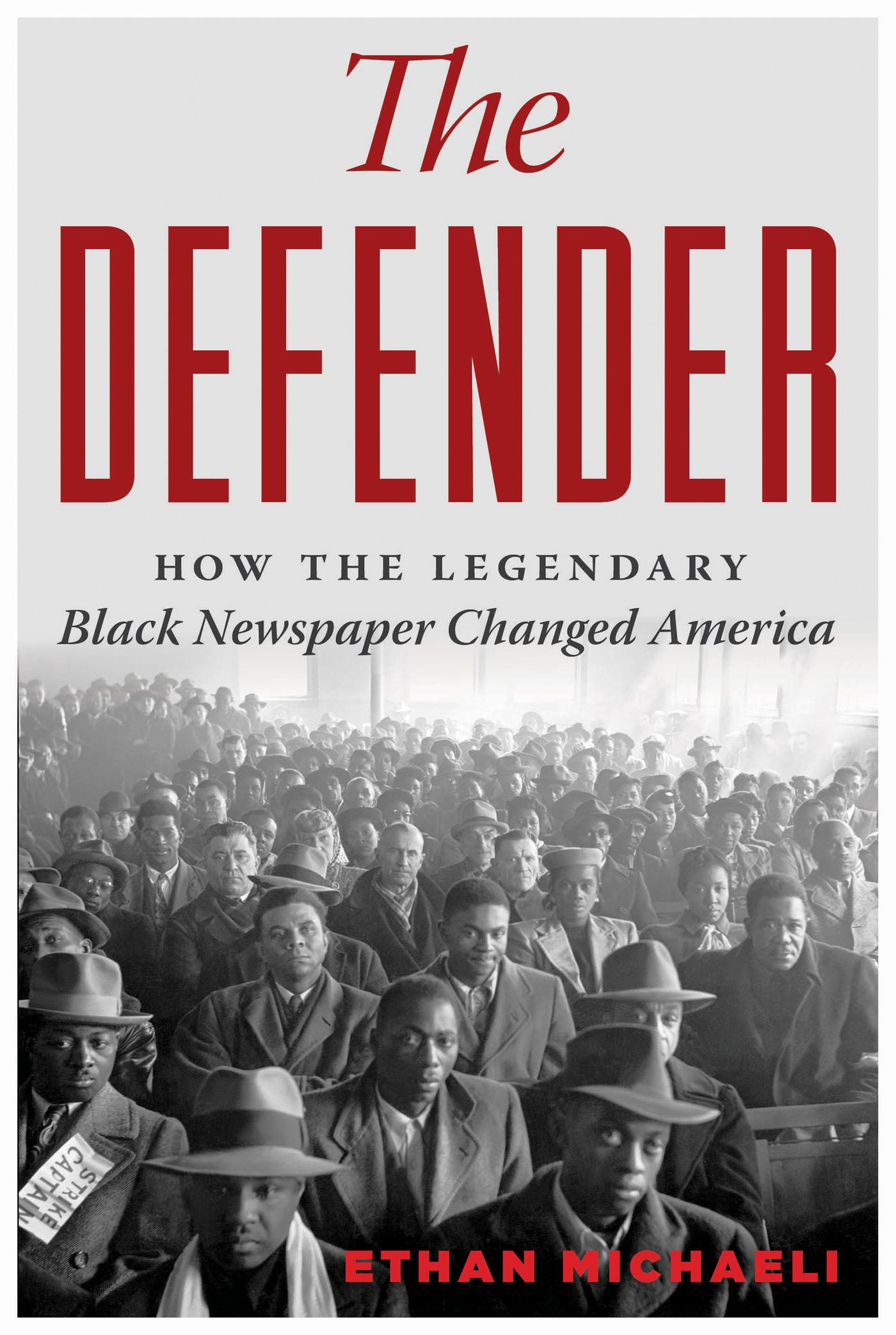 It was the fall of 1936 and FDR’s reelection campaign was in high gear, but Robert Abbott remained loyal to the Republican Party authoring a series in The Defender that enumerated the president’s misdeeds when it came to African Americans. Abbott railed against discrimination in New Deal programs and the exclusion of skilled black workers from the administration’s large public works projects. The Social Security program speciﬁcally left out domestic workers and farmers, reportedly at the request of southern white congressmen, while the southern administrators of farm programs had deliberately worsened already desperate conditions for millions of sharecroppers. Abbott also took on the administration’s failure to advance antilynching legislation, describing Roosevelt as “silent as a sphinx” on the matter.

Perhaps the Republicans had failed as well, Abbott conceded, but Roosevelt had not fulﬁlled his vaunted promise to lead the Democrats in a new direction. “I have not in this article portrayed the Republican Party as a patron saint,” he wrote in the concluding article. “It has made its mistakes. Its punishment was defeat. What I maintain is that the present Democratic regime with the greatest opportunity to do good and with more power than any other administration has failed to meet the issues fairly and squarely and should be relegated to the scrap-heap just like the Old Guard in the Republican Party.”

Abbott’s passionate advocacy notwithstanding, FDR won reelection by a landslide, carrying Democratic candidates with him at the federal, state, and local level, all the way from Illinois’s governor’s mansion to the First Congressional District, where the incumbent U.S. Representative Arthur Mitchell won a rematch with Oscar De Priest by a margin even wider than in their previous contest. Mitchell had wisely hitched his campaign to the New Deal, while De Priest, for his part, announced that he had expected defeat and complained that his old cronies in the Second Ward refused to support him this time around. “I’m a good loser,” he told The Defender.

At the end of November 1936, Flaurience Sengstacke Collins, John Sengstacke’s oldest sister, returned from another trip overseas with disturbing news about how the family’s branch in Germany was faring under the ascendant Nazi regime. Flaurience had stopped brieﬂy in Bremen during the ﬁrst leg of a four-month round-the-world voyage. Five years had passed since she was last in Germany, and the atmosphere had changed from one of warmth and openness to oppression and paranoia. The oldest of these cousins was just one-quarter African, but under the Nuremberg Laws of racial purity passed the previous year, even that ancestry had become a dangerous liability. All of the Sengstackes’ relatives had been labeled “non-Aryans,” a status under which government oﬃcials removed the younger family members from school, ﬁred the adults from their jobs, cut their food rations, and even blocked them from mundane activities like wearing a brown shirt, part of the uniform of the Nazi paramilitary units. 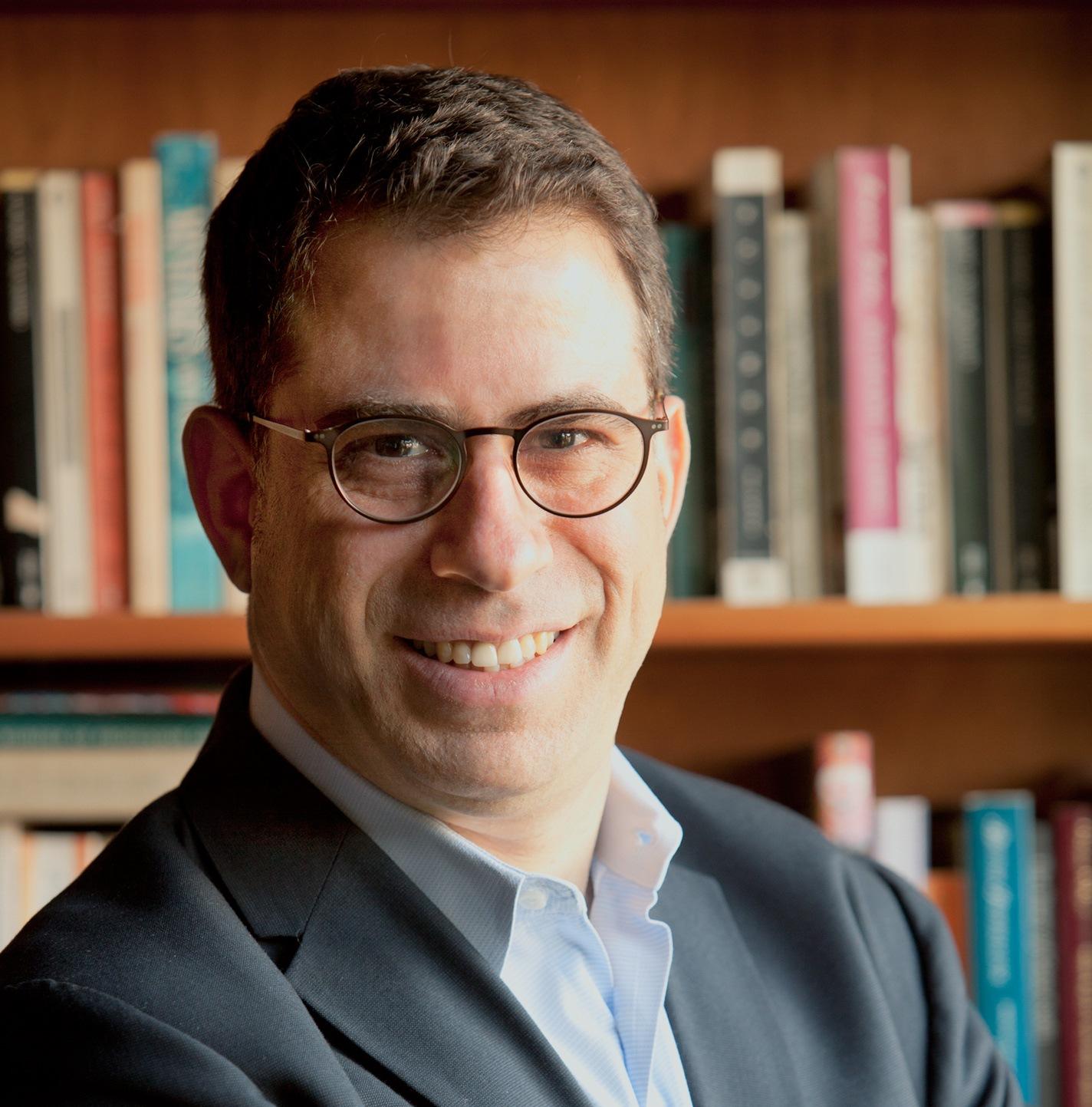 Ethan Michaeli (Jason Reblando) The family members explained to Flaurience that they had not written to “Uncle Robert” previously about their situation because they feared the Gestapo was reading their mail and would have punished them for relating any information portraying the Third Reich in a negative light. Their worries were only magniﬁed when one great-grandson of the ﬁrst John H. H. Sengstacke and Tama, a young man named Heinz Boedeker, somehow circumvented the Nazis’ strict rules for “racial purity” and joined the party himself.

Each night during Flaurience’s visit, the family nervously locked their doors and drew their curtains. Inside the homes, she noticed that a photograph of Robert Abbott that had hung proudly in their parlor during her last visit had been put away, as well as all the photos of their maternal ancestor, Elizabeth Sengstacke Boedeker, because of her distinctly African complexion. Finally, they asked Flaurience before she left to bring a message back to Chicago to please stop sending them copies of The Defender, “because the Germans don’t like unfavorable comments about their people.”

Pessimistic as Robert Abbott was in his assessment of President Roosevelt’s ﬁrst term, there was one member of the administration with whom he maintained a warm personal and professional friendship, the incomparable Mary McLeod Bethune, who, as FDR entered his second term at the beginning of 1937, became the most powerful African American in the federal government. Bethune was sixty-two that year and served as director of the Negro Aﬀairs Division of the National Youth Administration, a job with a sizable budget and payroll, but her real strength was in the personal relationships she enjoyed with President Roosevelt and the two most important women in his life, his wife, Eleanor, and his mother, Sara.

Tall and heavy, with a dark complexion, the daughter of sharecroppers in Florida, Bethune was the only one of her siblings to receive an advanced education, a degree from the Moody Bible College in Chicago, before she went on to found a school for the vocational training of black girls in her native Daytona in 1904. Even creating a school of this type was considered a radical act in those days in the South, and Bethune had to endure harassment from the local branch of the Ku Klux Klan. Nevertheless, through relentless fundraising and promotion, she grew her school into a full-ﬂedged coeducational academic institution called Bethune-Cookman College and, in the process, caught the attention of Sara and Eleanor Roosevelt, who frequently invited her to their home in New York.

Bethune, who had supported FDR enthusiastically in his ﬁrst run for president, had been appointed to the board of the NYA early in the term. But even she found herself often frustrated in trying to make the New Deal programs serve African Americans. In July 1935, Bethune visited Chicago, where she stayed with Robert and Edna Abbott in the South Parkway mansion, toured The Defender’s plant on South Indiana Avenue, and gave an interview to the newspaper’s women’s page editor. “Work in the South moves under handicaps,” she admitted frankly. “Only courage, faith and ﬁght keep us going.”

She was no less blunt when she met with FDR in April 1936, departing from her prepared report to demand that the administration do more for the enormous number of black families in need. “We have been eating the feet and the head of the chicken long enough,” she told the president. “The time has come when we want some white meat.”

Instead of taking Bethune’s challenge as an insult, the way President Wilson had taken Monroe Trotter’s comments, FDR was moved by her words and shortly thereafter appointed her director for the newly created Negro Aﬀairs Department in the NYA. Bethune “has her feet on the ground,” FDR told an aide when he made the appointment, “not only on the ground, but deep down in the ploughed soil.”

"Paper Trail: 100 Years of the Chicago Defender" was the winner of three Emmys in 2006 for Best Documentary, Best Host (Harry Lennix) and Best Writing. In 2005, it received the Peter Lisagor Award for Exemplary Journalism in the in-depth reporting (documentary) category. 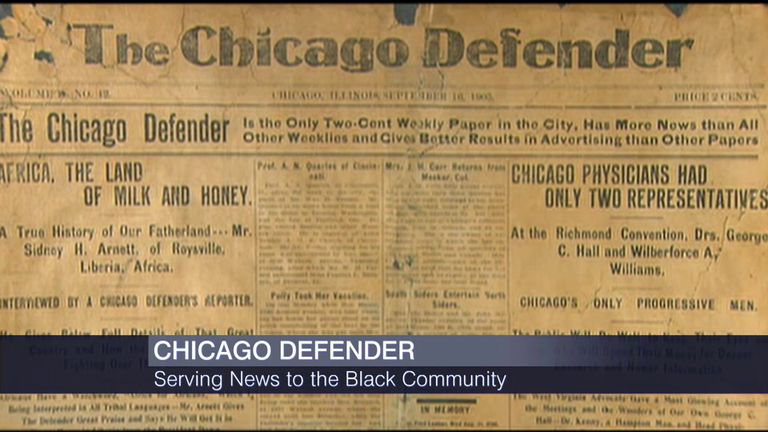 Dec. 3, 2014: The Chicago Defender was founded in 1905, and at one point was the nation's most influential black weekly newspaper. We talk with the new editor and publisher about the publication. 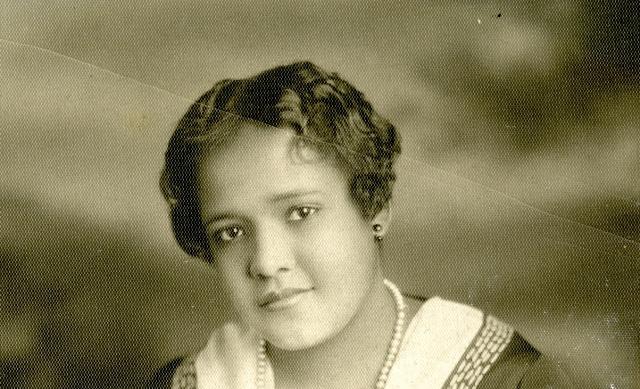 March 30, 2015: Chicago's own Ethel Payne was the third African-American to ever receive White House press credentials -- and she was only the second black woman to do so. We talk with the author of a biography about the importance of her legacy. 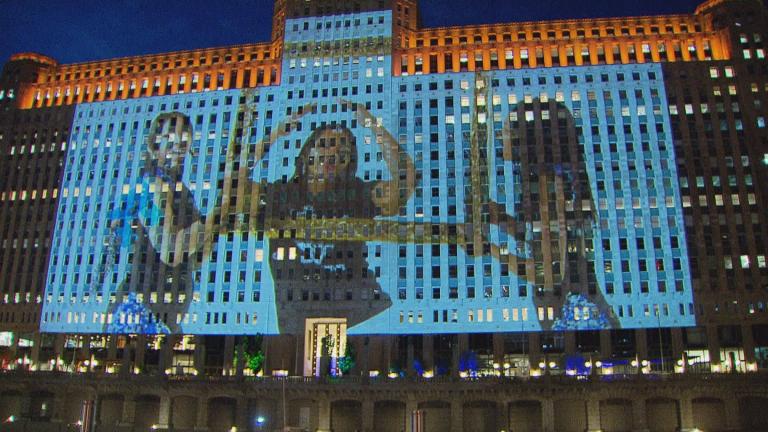 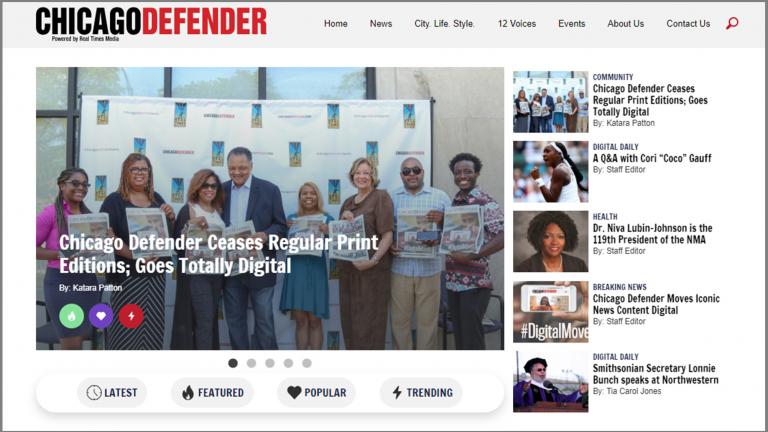 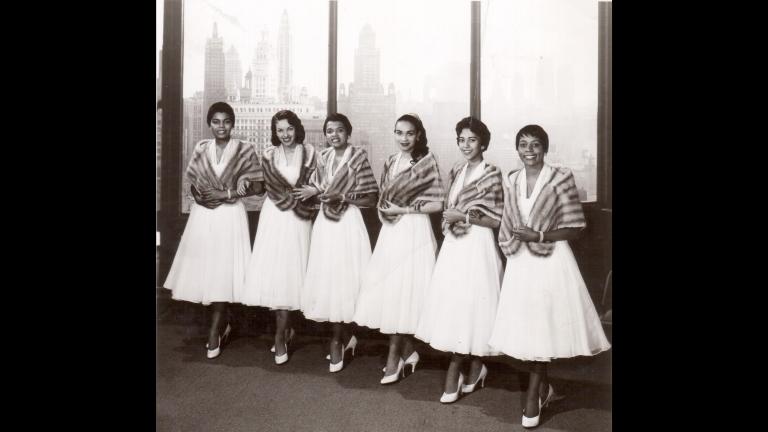 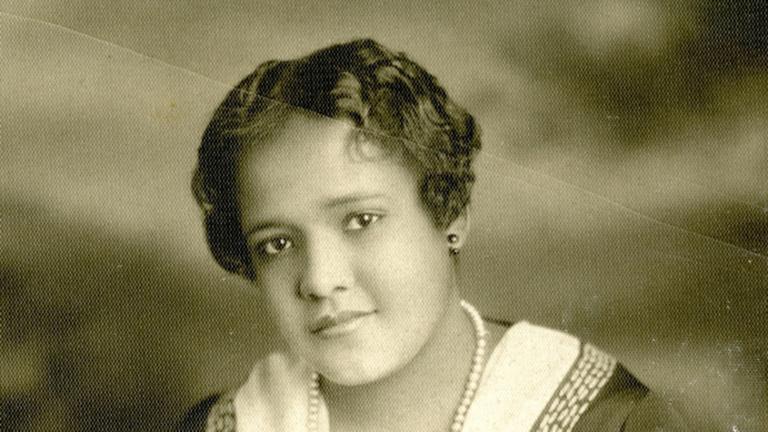