After a print run of 114 years, The Chicago Defender has printed its last edition.

The once must-read newspaper for black Americans that chronicled everything from the 1919 Chicago race riot to Emmett Till’s murder to the assassination of Martin Luther King Jr. will become an online-only publication.

Hiram E. Jackson, the chief executive of Detroit-based Real Times Media, which publishes The Defender, told the New York Times the decision was about economics and “an effort to make sure that The Defender has another 100 years.”

But others see the move to go online only as simply delaying the inevitable.

“This is tragic. This is just not a good thing,” said Glenn Reedus, interim executive editor and managing editor at The Defender from 2007 to 2008.

Reedus, now an independent journalist, said that at its peak The Defender could be found in most African American homes.

“It was the next thing to the Bible. I mean it was everywhere. Pretty much anyone’s house that you went to had The Defender,” said Reedus. “There was a joke that it didn’t happen if it wasn’t in The Defender.”

But the newspaper that once featured contributions from the likes of Langston Hughes and Gwendolyn Brooks has in recent years fallen on hard times. A circulation that once reached more than 200,000 dwindled to just a few thousand copies.

According to Reedus, that was in part because under the ownership of Real Times Media, The Defender moved away from hard news and instead focused on entertainment and feature stories.

“I’m a newspaper purist and I believe that to have an engaging and effective newspaper it has got to be run by people who have been in the business,” said Reedus. “I have no idea why so many people come into this business to cover entertainment.”

Charles Whitaker, the newly named dean of the Medill School of Journalism, Media and Integrated Marketing Communications, said that The Defender had once been incredibly influential.

“It was a source of pride as well as information,” said Whitaker, who was senior editor at Ebony magazine from 1985 to 1992. “It was the place where you got to see the full spectrum of the African American experience. It was where all of our events and humanity were chronicled through what people like to refer to as an authentic voice, an African American voice and an African American lens – and that was very important.”

But he said that as the number of print copies plummeted it no longer made sense to continue as a print publication.

“It was inevitable. That is the way that most legacy media outlets are going,” said Whitaker. “The circulation had dwindled to 16,000 so they were not actually printing and distributing that many copies so it only makes sense that they would eliminate the print edition.” 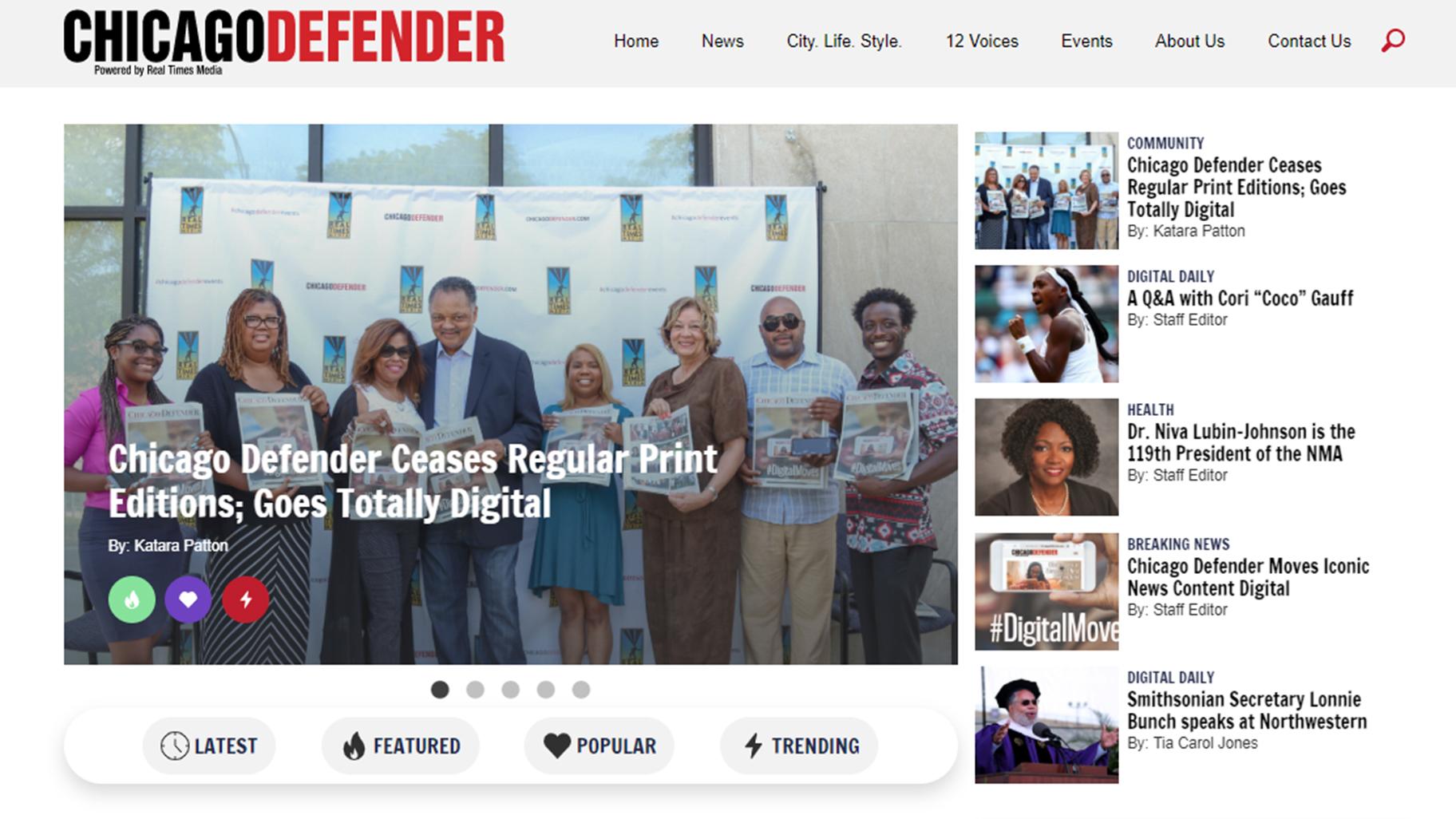 According to Reedus, The Defender had two peaks in terms of its reach and influence.

The first was during the 1910s and 1920s when the newspaper, which was distributed across the country – including surreptitiously to the south – by Pullman railroad porters, helped fuel the Great Migration of African Americans from the south to the north.

“(Robert Sengstacke Abbot, the founder of The Chicago Defender) sent the paper with Pullman porters because they traveled the country and the reporters back here wrote about what life was like and what the opportunities were like in Chicago versus the small towns in Mississippi and Alabama,” said Reedus. “People wanted to come and that’s what led them.”

Reedus also cites the paper’s coverage of the civil rights movement as another period when its influence was at its peak.

“The mainstream media wasn’t giving it the kind of coverage that it deserved,” said Reedus. “It wasn’t going in to these communities where a lot of the civil rights planning and activities were occurring but The Defender did. It covered it extensively.”

While Reedus laments The Defender’s decline, he said that he still believes there is demand for news that is focused on the African American community.

“I think there’s a need but The Defender just wasn’t filling it,” said Reedus. “And when we talk about mainstream coverage, those outlets just scratch the surface of the community … There are so many more stories that if they were serious about covering they could.”

But according to both Reedus and Whitaker, the key issue is a fundamental lack of diversity in newsrooms.

“The fact that there are not enough people from a wide swath of backgrounds and perspectives that are helping to tell those stories and helping to shape the depiction of the news that we see, that creates frustration,” said Whitaker. “And those people of color who are in those newsrooms often feel marginalized.”