Raise a glass to Oktoberfest and other fall festivals

Looking for something to do? Check out our lineup of events for the entire weekend. Oktoberfest Chicago (all weekend)
Saint Alphonsus Church, 1429 W. Wellington Ave.
The annual fest is back and promising more beer, brats and bands than ever before. Well, all right then. For extra dough, beer lovers can participate in Craft Beer Night on Friday and Saturday from 6-9 p.m. Tickets include tastings from European and local craft breweries and a commemorative glass and pretzel necklace. 5-10 p.m. Friday; 11 a.m.-10 p.m. Saturday; 11 a.m. - 7 p.m. Sunday. $5 admission; free on Sunday for all. Craft Beer Night: $40, $30 for brewmasters.

Chicago Critical Mass
Daley Plaza, Dearborn and Washington Streets
Tour city streets and take in late-summer sights during this long-running “celebration of riding bicycles” that’s open to all and doesn’t stop for season or weather. Meet at 5:30 p.m. Free. 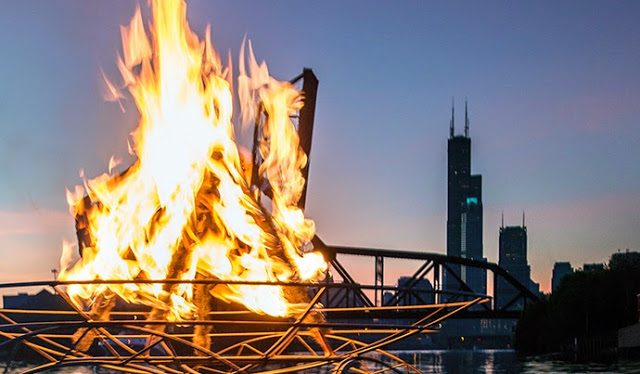 Great Chicago Fire Festival
Northerly Island, 1521 S. Linn White Drive
It's round two for the outdoor spectacle produced by Pilsen-based Redmoon Theater. If you recall, it didn't go over so hot last year (no pun intended), thanks to miserable weather which kinda put the kibosh on the fire part of the festival. This year, the scaled-back version of the free festival includes multiple performance stages, a fireworks finale and – if the stars align – the burning of a giant house. Fingers crossed. 5-9 p.m. Free. Read more about this year's festival.

Fright Fest opens
Great America, 1 Great America Parkway, Gurnee
This is night one of the fest, which runs through Nov. 1. Get chased around the park by creepers, freak yourself out in haunted houses and enjoy the general terror that is Fright Fest. 11 a.m.-midnight. $34.49-$53.99.

Free Day
Adler Planetarium, 1300 S. Lake Shore Drive
See the "stars" for free at Adler, which is offering complimentary general admission today as part of Smithsonian magazine’s 11th annual Museum Day Live. Download a ticket in order to gain free general admission to the museum for up to two people, with a limit of one ticket per household and e-mail address. The free ticket is available for download here. 9:30 a.m.-4:30 p.m.

Grand Art and Design Festival
Grand Avenue, between Wood Street and Western Avenue
Explore the Grand Avenue design district, home to interior designers and antique furniture dealers, at this annual event formerly known as Design Harvest. In addition to home and garden vendors, browse wares by local artists and crafters, including clothing and jewelry. Food trucks, activities for kids and two stages of live music programmed by the Hideout round things out. Though technically free, a $5 suggested donation is requested.11 a.m.-8 p.m. Through Sunday.

More: Read about a free screening of "Hocus Pocus" at a cemetery. Hyde Park Jazz Festival
Various venues
This is the ninth anniversary for the fest, which this year hosts more than 35 bands on 14 stages. Musicians include Angel d’Cuba, Fat Babies, Henry Threadgill and David Virelles, and Regina Carter and Xavier Davis, among others. Sunday highlight: Saxophonist Pat Mallinger – co-founder of the Sabertooth jazz ensemble – performs alongside pianist Bill Carrothers from 4-5 p.m. at the Wagner Stage. Various times, suggested donation $5.

Blocktoberfest
18th and Allport streets
Dusek’s Board & Beer celebrates its two-year anniversary inside Pilsen’s Thalia Hall with a neighborhood bash (2-10 p.m.) with an Oktoberfest twist. Stop by the family friendly affair for sausages and other German-inspired fare from Dusek chef Jared Wentworth, beers, DJs, and face-painting for kids. Free admission.