Extreme Biking in the City

Last summer, Jay Shefsky brought us to The Garden, home of Chicago’s dirt jumps. We revisit his story of the hidden treasure found in Chicago’s woods. 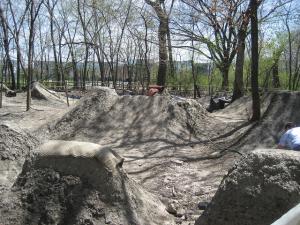 Among the most famous and beloved landmarks in Chicago's past was Riverview — exotic side shows, the parachutes, and, of course, roller coasters.

After Riverview closed in 1967, much of the land became a shopping mall, but part of it went back to woodland. And hidden in those woods today are new wild rides.

Another area is called a pump track because you pick up most speed not from pedaling, but from the up and down "pumping" motion that propels the bike forward.

“It's an incredible workout,” Kawka said “After one lap, you will be incredibly winded. I guarantee you. And you can get going really fast on this thing — really fast.”

“Ok, this section of The Garden bike park is the more advanced-intermediate area,” Kawka said. “These are the dirt jumps and the table lines. We have about 23-24 jumps total here with a lot of talented riders.” 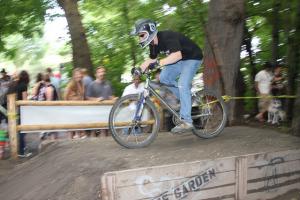 In this section, riders start by climbing up. Since there's no real hills around here, they covered a storage container with dirt. And it gives them enough speed for jumps like these.

“The city got really mad at us,” he said. “They threatened to plow us.”

“A couple months later and a lot of meetings, later they were like, yeah we can totally do this,” Kawka said.

The city provides the land and a sign at the entrance, but no money, no people, and no materials. 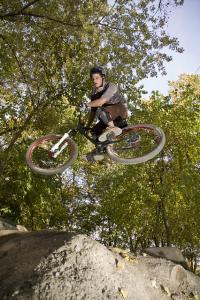 He's particularly happy about a load of clay they just scored from a contractor building a pool. Most of their dirt is much sandier.

And it needs regular maintenance and a close eye on the weather.  A little water is good, but not a lot.

“You've noticed all the tarps lying around? That's erosion control,” Van Aker said. “Whenever it's about to rain, we want to make sure everything is tarped because it saves us hours and hours of work."

The jumps are all built from soil. Some are six feet tall and riders can fly 14-15 feet in the air.

Safety of course is a big concern. But other than strongly encouraging helmets, it's ride at your own risk. Expect to fall now and then. 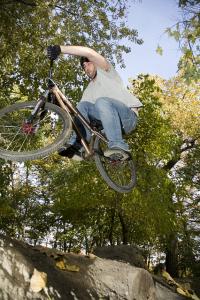 “This used to be an amusement park, yeah, with roller coasters and water rides and all sorts of crazy stuff so we thought for a great homage to the place we named the lines after a lot of the roller coasters,” Kawka said. “So we have wild mouse, which is the easiest one, and there is aero stat, comet, and blue streaks."

“Chicago is a super bike-friendly city, I feel, it's so easy to get around here on a bike,” Kawka said. “So why not have other aspects of cycling. Because a lot of people don't know what this kind of stuff is."

And what we don't have here is a lot of hills.