The 25th anniversary of the Hubble telescope is this month, scientists find a potential breakthrough in our understanding of Alzheimer's disease, and the likelihood of finding life on Mars just went up. Rabiah Mayas, Director of Science and Integrated Strategies at the Museum of Science and Industry, rounds up the top local and international science news.

Hubble Telescope’s 25th Anniversary
For 25 years, NASA’s Hubble Space Telescope has hovered 340 miles over Earth, making its way around the Earth’s circumference every 97 minutes. The telescope, which was launched on April 24, 1990, is hailed as one of the greatest scientific tools of all time, enriching our knowledge of the universe while awing us with breathtaking images of the cosmos. Named after astronomer Edwin Powell Hubble, who spent most of his childhood in Chicago and attended The University of Chicago, the Hubble telescope has made more than 1.2 million observations and contributed to more than 12,800 published papers, including a 2013 finding by The University of Chicago scientists of cloudy weather on a planet named GJ 1214b.

View images taken by Hubble through the years. 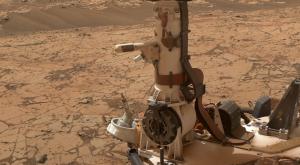 Water on Mars?
In other space news, NASA’s Curiosity rover has discovered that conditions on Mars are favorable for producing briny (or salty) water. Since it landed in August 2012, Curiosity has roamed the Red Planet, measuring the air humidity and temperature. Some nights, the air is just cool and moist enough to dissolve perchlorate salts found in Martian soils and form brine. If brine does form, it’s likely to dry out before sunrise. 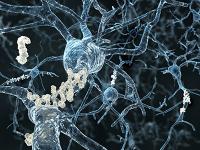 Alzheimer’s disease has been discovered for the first time in the brains of people as young as 20. In a study published in the journal Brain, scientists at Northwestern University found amyloid –a protein that clumps together to block signals in the brains of people with  Alzheimer’s—begins building up in the neurons of young human brains. These neurons, which play a role in memory, die early when surrounded by the protein plaque.

Large Hadron Collider Restarts
The Large Hadron Collider in Switzerland – the world’s largest and most powerful particle accelerator – was turned back on this month after two years of intense maintenance. The collider accelerates protons to nearly the speed of light by consuming enough energy in a year to heat 300,000 homes. Chicago’s Fermilab helped construct the LHC accelerator and its scientists and engineers are active participants in LHC research.